September 07, 2017
It's been slim pickings at the local tip of late, well, it hasn't really, but I just figured that I have a back log of bikes that I really need to get rid of, so instead of buying more 'projects' I'd concentrate on having a clear out instead. However I still like to have a little lookie from time to time to see what I might be missing out on. I found that I was having a slow day, and I was twiddling my thumbs a little so I figured that I might as well kill some time and go down to the city tip and have a poke about. I was jolly glad I did, as I managed to snag myself an old TV cabinet, which is now doing sterling duty at BelongaClint. There were also quite a few bikes, and even though I really didn't want, or need anymore, I foolishly went over to browse. There were some pretty decent mountain bikes, and various other 10-15 year old cycles, but nothing really piqued my interest... Until I saw this thing... 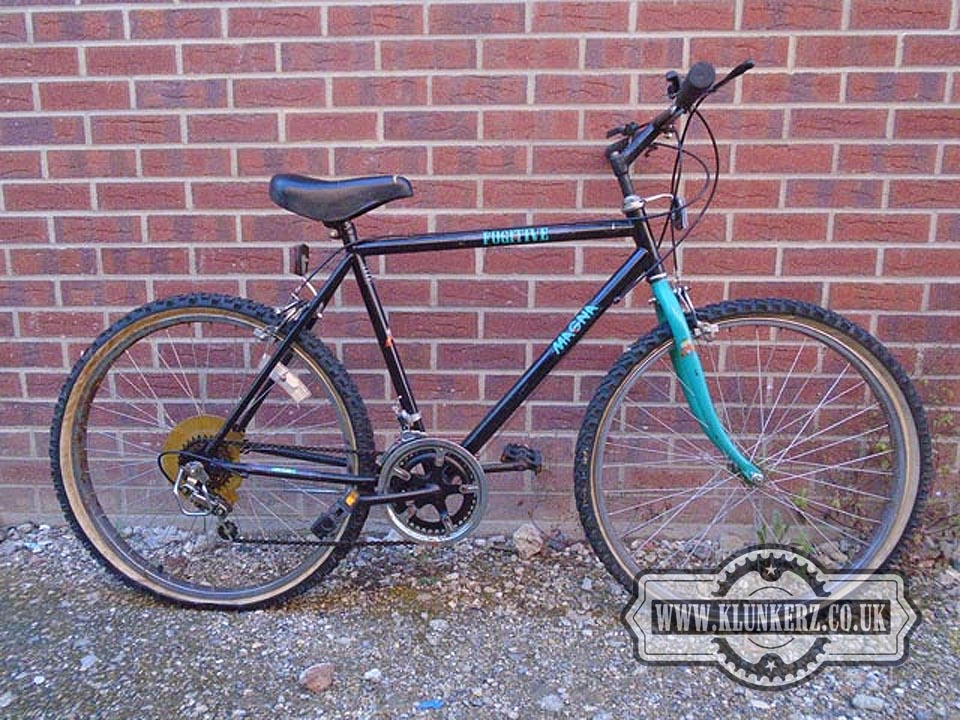 Now some of you are probably shaking your heads and wondering why I was interested in a mountain bike from the 1980's? I've wondered this myself! 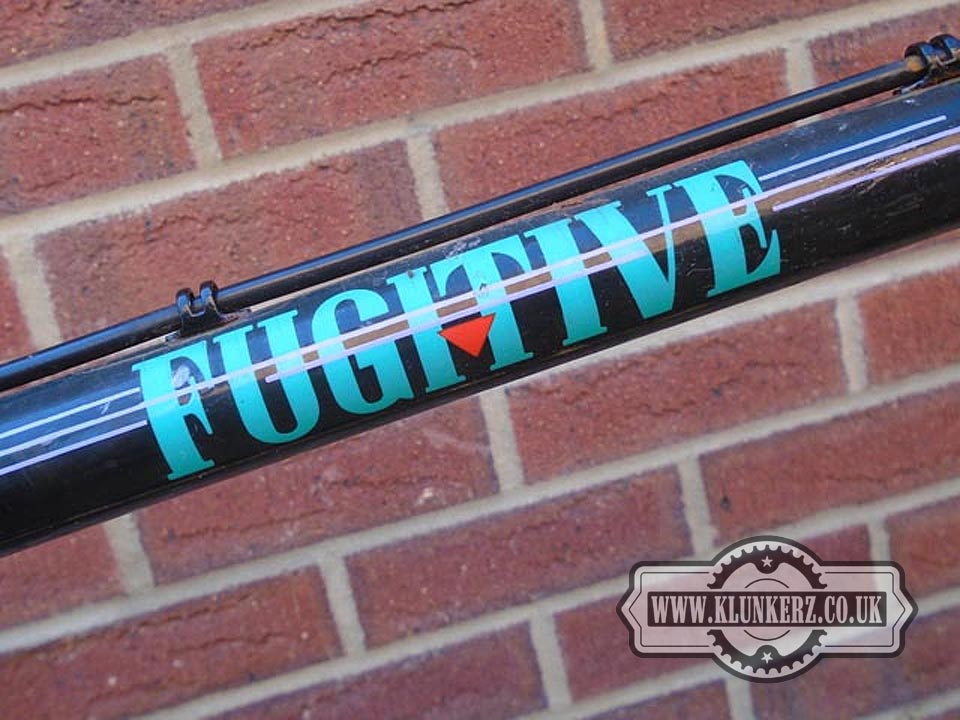 So why am I harbouring a Fugitive? Well, I honestly cant tell you? I just looked at it, and thought crikey thats old and crap, then walked away. But when I got back to BelongaClint and unloaded my new TV cabinet I was still thinking about the damn crappy bike. I started thinking that maybe I should go and have another look, see just how old and crap it was. So back at the tip, and I'm stood there looking at it. The old boy that works there saw me looking at it and said to me, You're not going to buy that are you? I chuckled and said jovially, No... I'm going to steal it!! We both laughed. Anyhoo, surprisingly it was obvious that this thing had been treasured by someone, as it was in good shape, not really got any rust to speak of, and even the tyres looked pretty new. The chrome on the wheels however was another story. The more I looked at it, the more I thought to myself that if I didn't have it, then as it was old, there was a good chance that no one else would want it either and it would just end up in the skip, and on it's way to being something mundane like a soup can or something. DAMMIT!! I just could't leave it there, the damn thing just spoke to me, and like the Quebec scientist Andre Delambre, in the 1958 science fiction-horror film The Fly. You know the bit when the fly is trapped in the web, with both Andre's head and arms, looking terrified. It screams "Help me! Help me!" as a large brown spider advances on the creature... I couldn't leave it there to be sucked dry by the spider!! So instead I rescued it from the jaws of the grab that would inevitably come for it and dump it in the steel recycling bin! So I paid my money, which was far too much really for a bike that was produced in China for American cycle brand owned by Dynacraft BSC, and sold as Magna throughout the Walmart group of companies for less than £100 when new! But like I said, it spoke to me... So off home I went, still confused by what I had just purchased. Once back home I started to give it a proper look over, just to see how mad I was, even Mrs Clint asked if I had been out in the sun too long! But on closer inspection this is what I have... 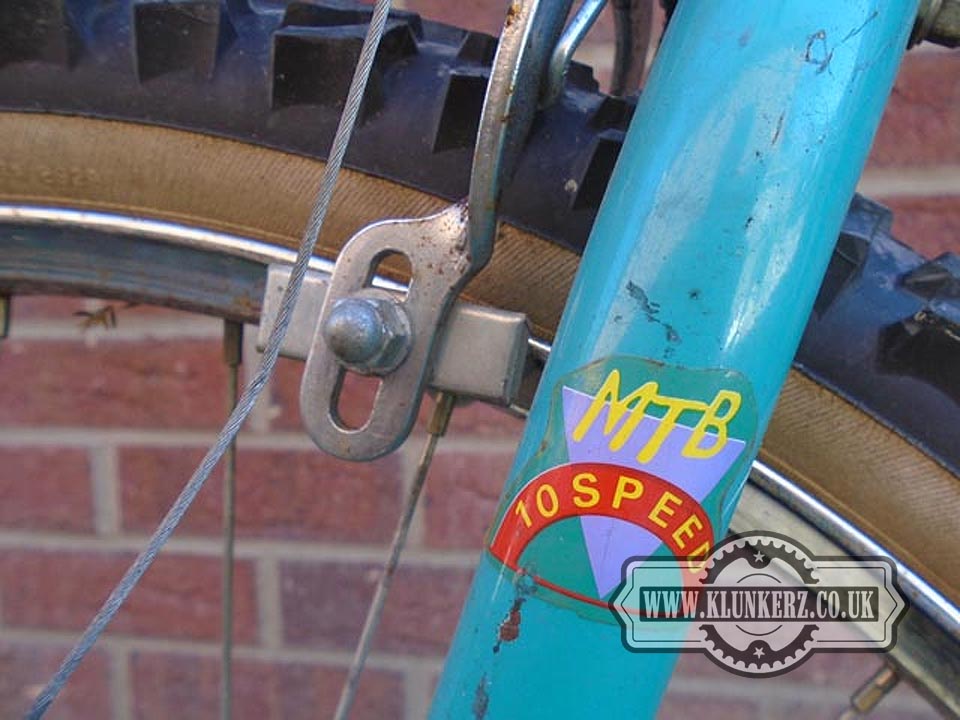 TEN SPEED!! Oh yeah, but I only seem to use three of the gears on my bikes at the best of times, so I'm not too worried about that! Look at that tyre! 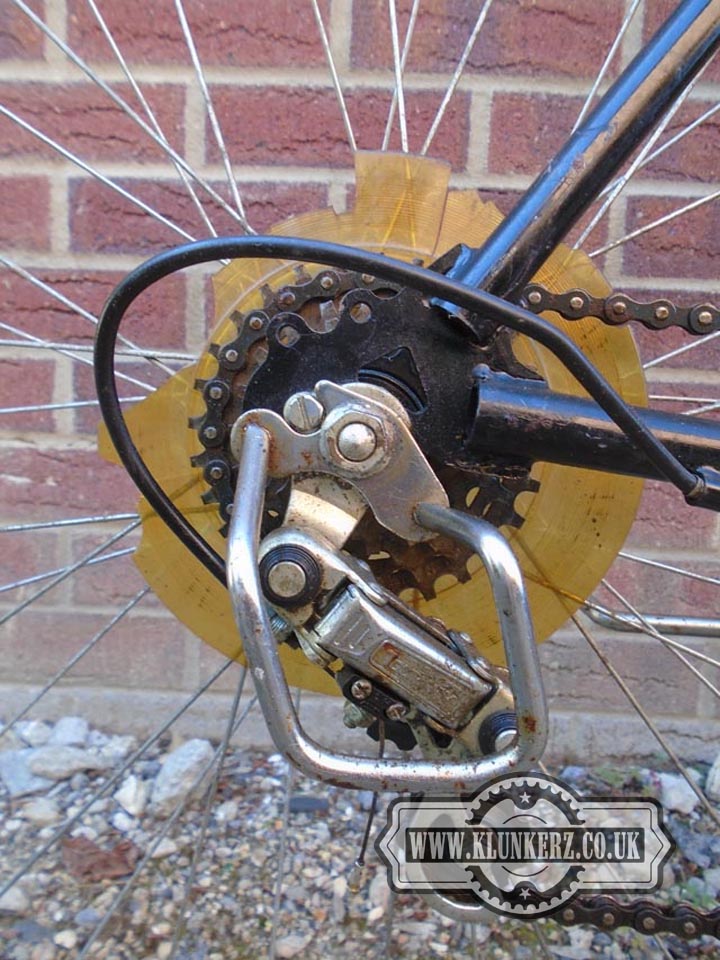 Gear gaurd, and spoke protector which has seen better days, but theres something about this that I love! Honestly, I am losing the plot! 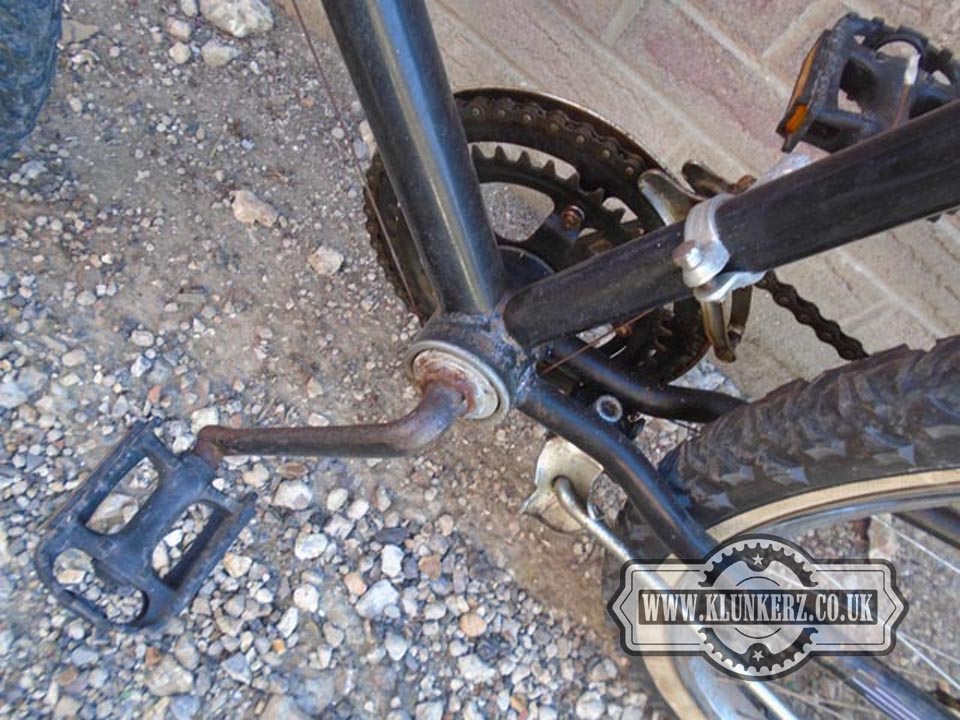 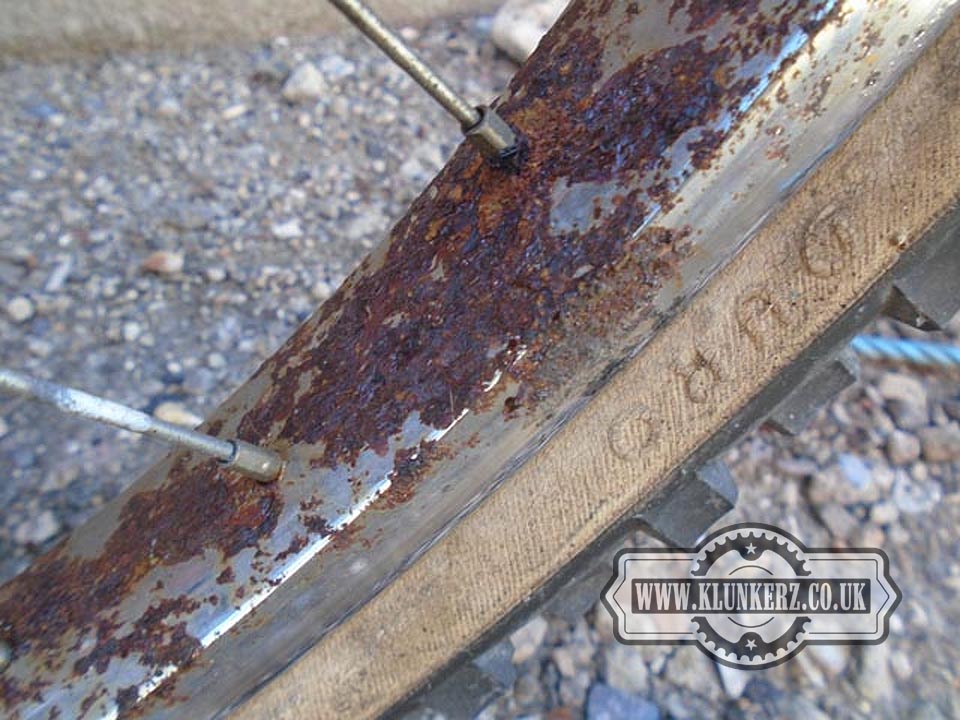 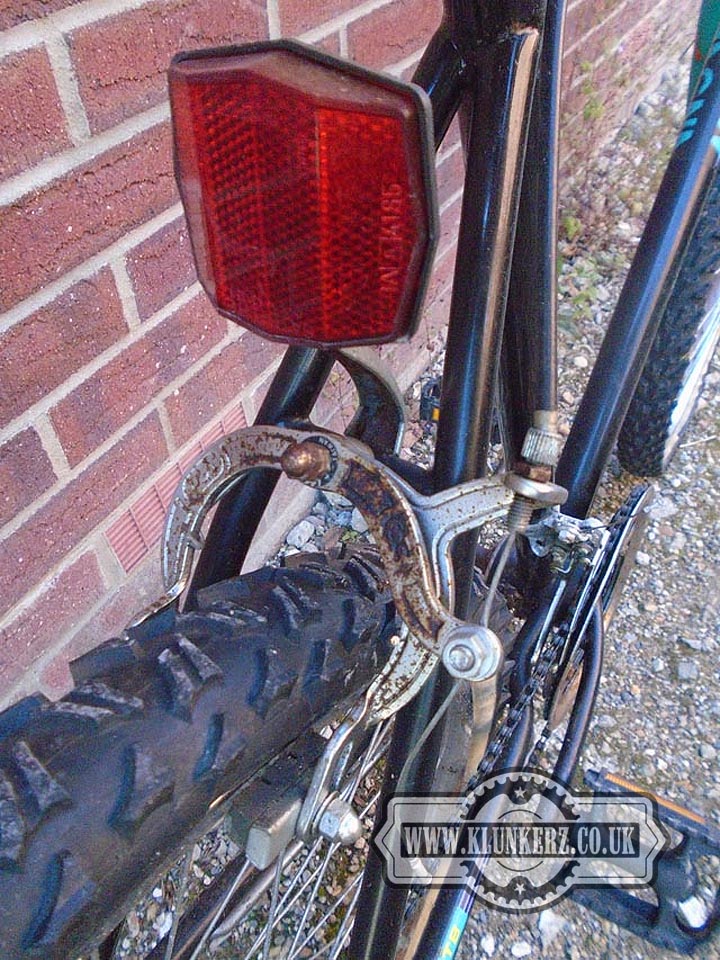 Eighties-tastic reflector chunkiness, and caliper brakes! What more could you want? Check out the condition of that tyre! 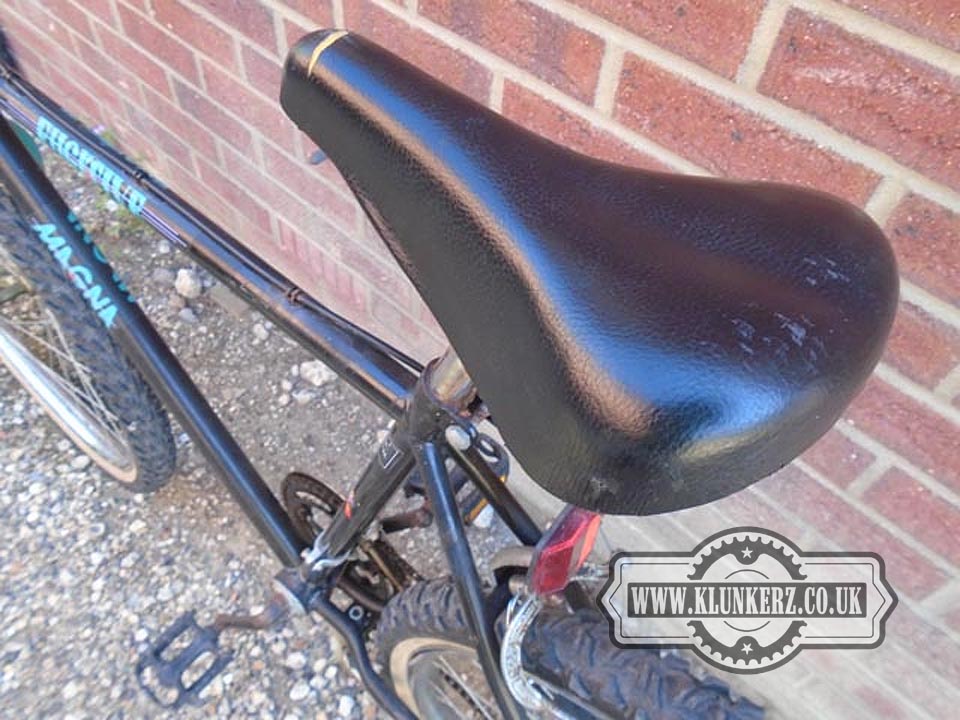 Not the comfiest seat I've ever perched me bum on, but atleast it wasn't filled with water, and was dry! 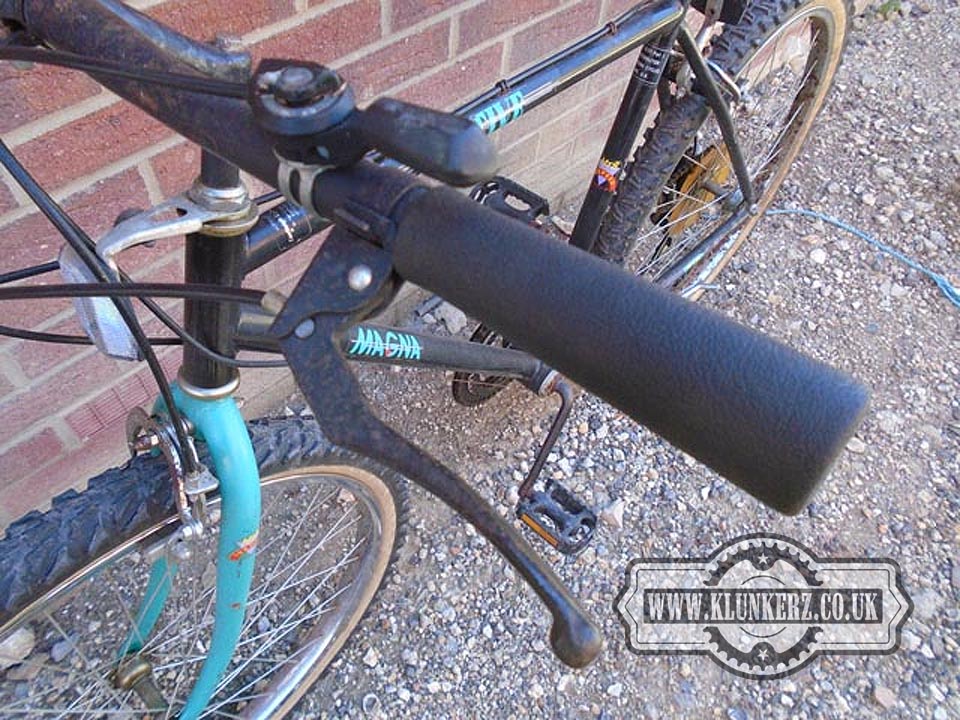 Brake levers and gear shifters, just one look at these, and you would've just known that this was a cheap bike! Anyway, as ridiculous as it sounds, none of this put me off, so I installed some new wind into the very flat tyres, made sure it was all tight, and set off for a test ride! 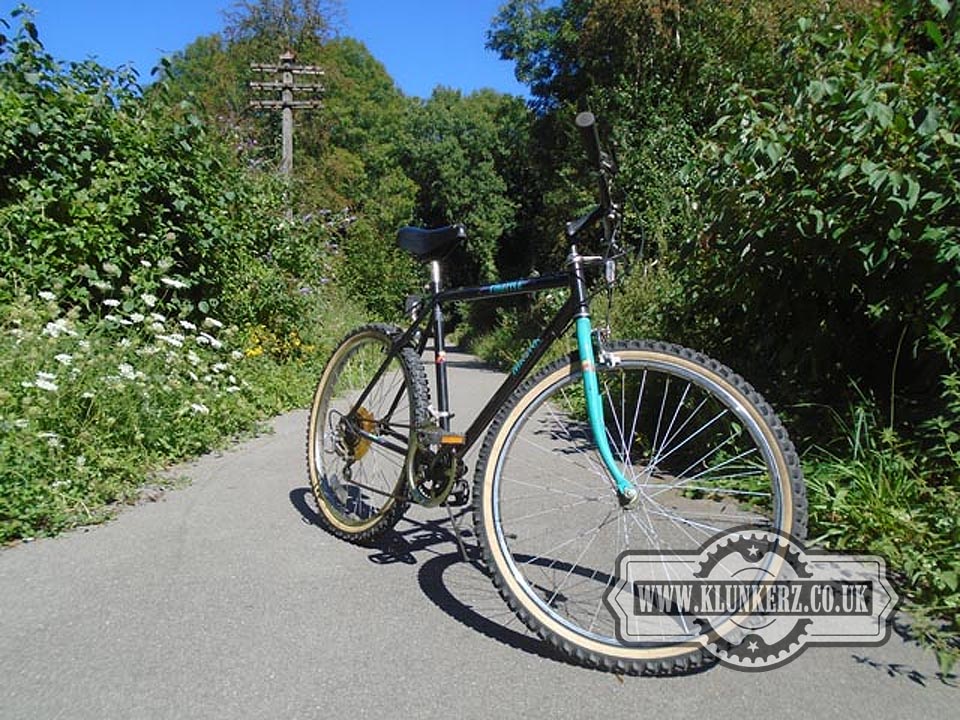 Make no mistake, this is a heavy old beast! But the ride was pretty good, infact, I really enjoyed riding this bike as there were absolutely no annoying little midges about to get in my teeth! However this isn't to say that the ride went well, because unfortunately I did mange to run some idiotic womans dog over! This stupid woman was walking along with her dogs, (about 10 of them, none of which were on leads) all over the 15' wide paved path through the country side. As I came up behind her, she heard me approaching as with those knobbly tyres I was buzzing along like an old Land Rover! She gathered all her dogs, by trying to herd them like a sheppard, I slowed right down to pass, to about walking speed, but as I passed one of the dogs decided to make a break for freedom and head off into the woods... Unfortunately for it, when he made his break for freedom he was about 1' from my front wheel! I tried to attempt a bunny hop, but as I've not tried that in about twenty years it didn't go well, and I hit the poor thing. Luckily for me I didn't come right off, unluckily for me there was some testicular interaction with the crossbar!! NOT COMFY! I stopped to make sure the dog was ok, and this quite sweet looking young woman just let me have it, with a torrent of verbal abuse for not paying attention to what I was doing, and I was a funky useless punt (or something like that!) I then retorted that she really should have control of her mutts, as it was actually a shared pedestrian/cycle path she was walking along. But she really wasn't happy about that, and then got really angry! It was then that she produced a bunch of leads from her bag, and fearing that she have a go at me with what would be like a cat 'o' nine tails I headed off as fast as I could, still with my nuts tucked up in my ass! 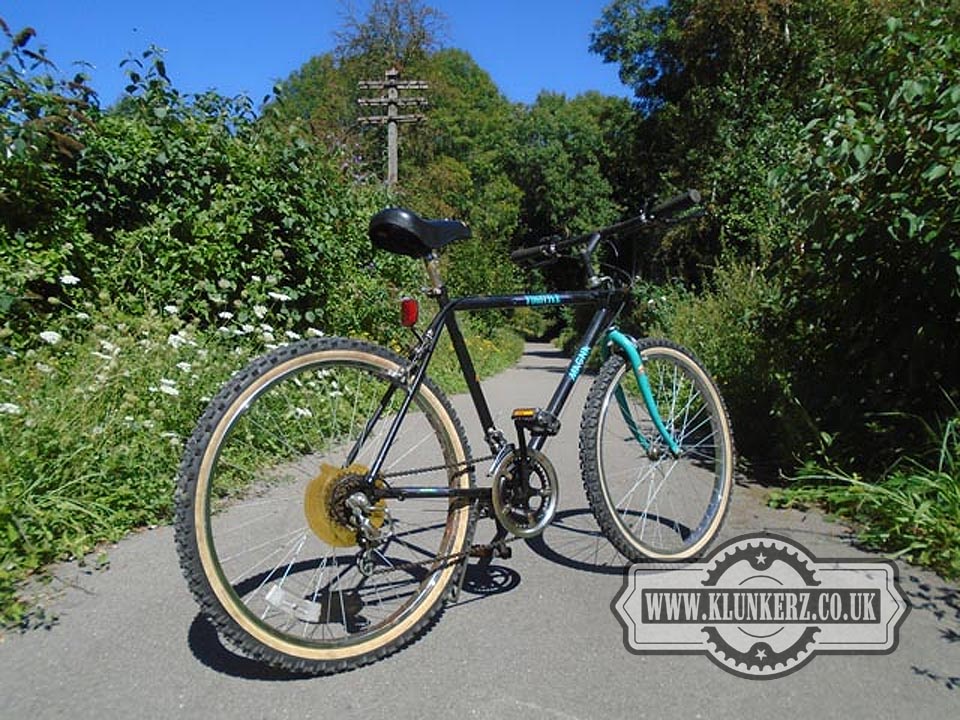 Once back home at BelongaClint, and my nuts were once again on the outside of my body I reflected on what a nice (although quite heavy) bike the Magna Fugitive is to ride, and what should I do with it? The truth is that ultimately it will be up for grabs, but I'm in no hurry. I think that the sadle has to go, it wasn't comfy before the testicle/crossbar intereaction, and it really wasn't comfortable after it! The wheels want changing, as they are quite rusty. I may even change the brake levers if I can stumble across some of those big chunky 'Lee Chi' levers from the eighties, or maybe some two finger BMX levers! I may also change the tyres as I think it might be better as a road bike, and nearly all the riding I do is on paved surfaces. But thats about it really, now all I need to do is have a good rummage through my spares stash, and see what I have! Updates as they occur!