February 02, 2018
I knew that trip to the tip the other day would prove to be problematic! Today, I went back. I actually went back to pay for the Triumph Palm Beach, as I didn't have enough money with me at the time and as I'm such a regular down there they let me take things and come back and pay them later. This probably works out better for them than me, as often when I return to pay for something I've bought earlier in the week, I end up buying something else! So this is what I picked up, a Daewoo Genius! 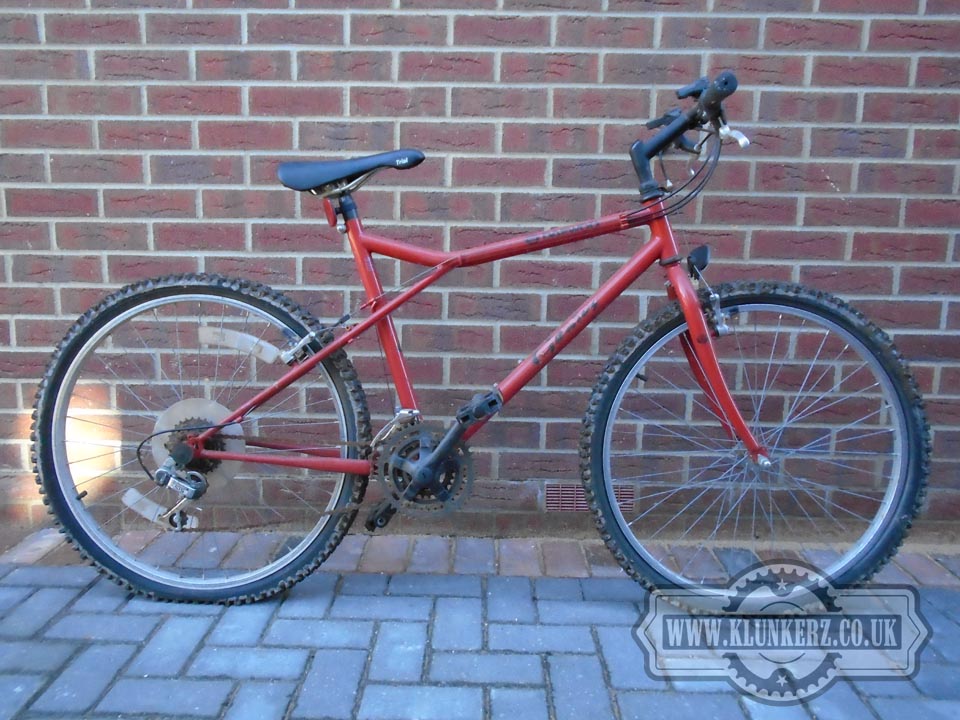 Why!? If you're asking yourself why, then you probably haven't read from the beginning! Long term sufferers probably realise that I have some kind of strange addiction to bikes from what you might call the cheaper end of the spectrum. I really have no idea what draws me to the cheaper end, but something does! However with this, it's not just that its a bargain basement bike. But for this particular bike it was that it had already been pulled out from the other bikes for sale, and was heading for the recycled steel skip. For me, it looked too complete to be heading for the recycled metal skip, there's still a bit of life in it! So that was that, the fiver that should've been my change was exchaged for the Daewoo! Actually, it's not just that it was heading for the skip, but also I wanted it, I've looked at them before when I've seen them out and about, and always thought that I'd quite like one. 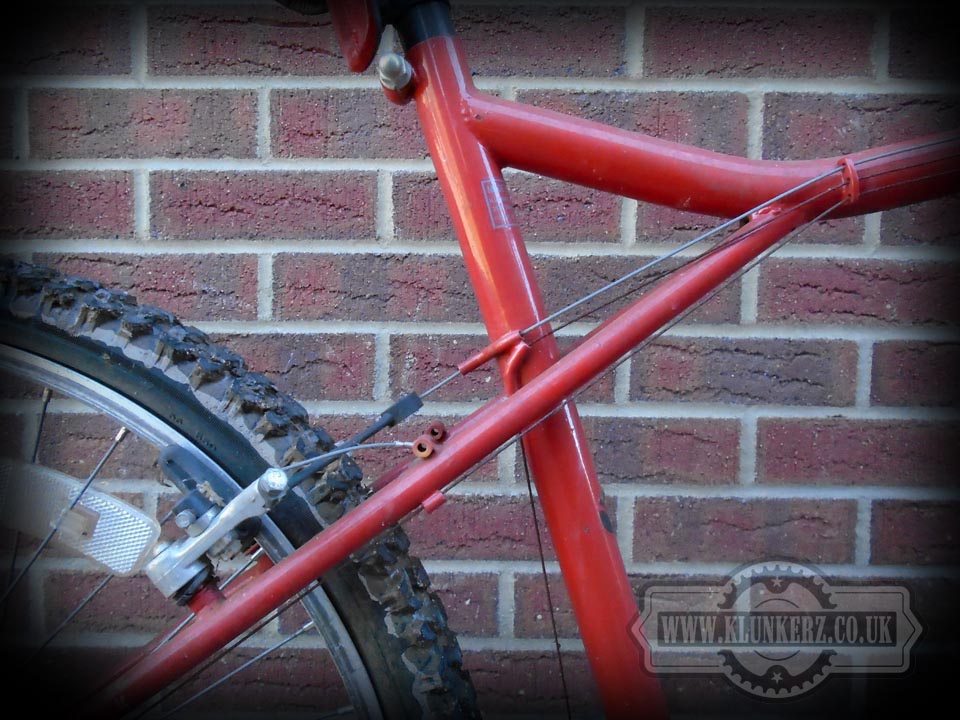 Like the Apollo Sublime that was the star of Episode 24, it's the frame. I know thats it's not as beautifully curvy as say a beach cruiser, but I like the quirky little kick up at the rear of the crossbar, and the way the seat stays cross the seat tube to meet the cross bar. To me I find the whole design quite interesting. 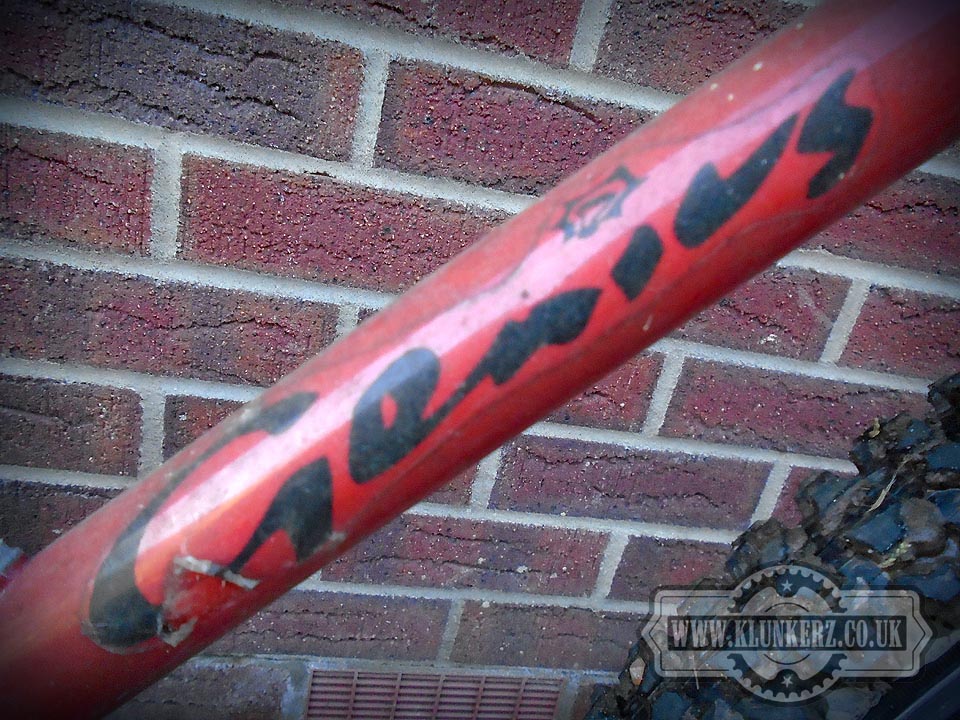 Yep, you've got to hand it to them, somewhere at Daewoo, some genius thought this was a great name for a bike! 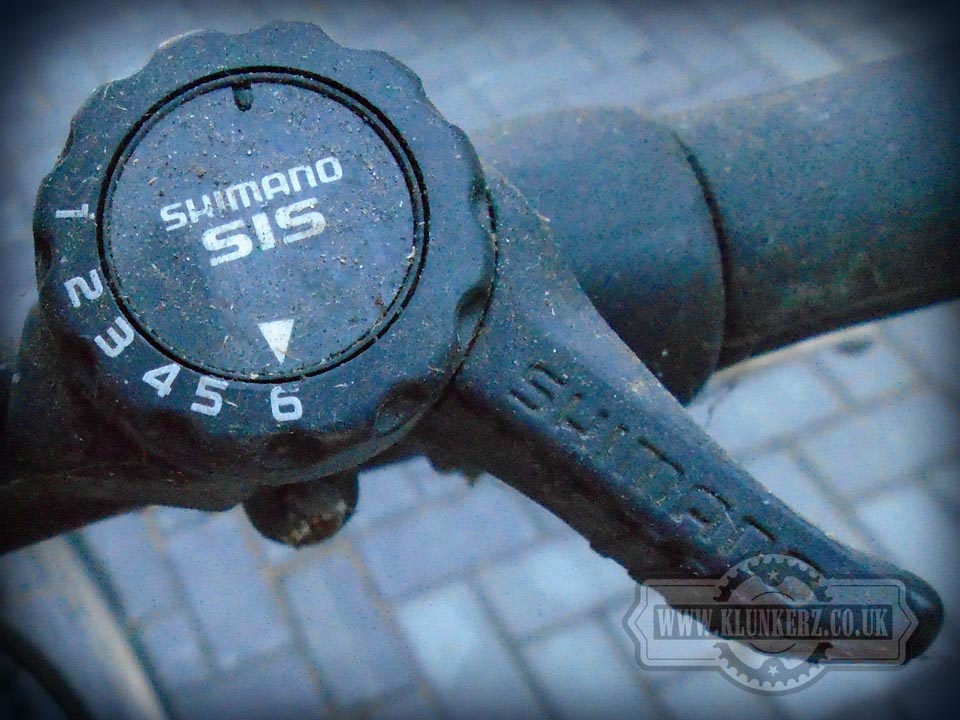 Its got 18 gears, and for me atleast thats probably more than enough, infact it's probably got 15 gears too many for my liking! 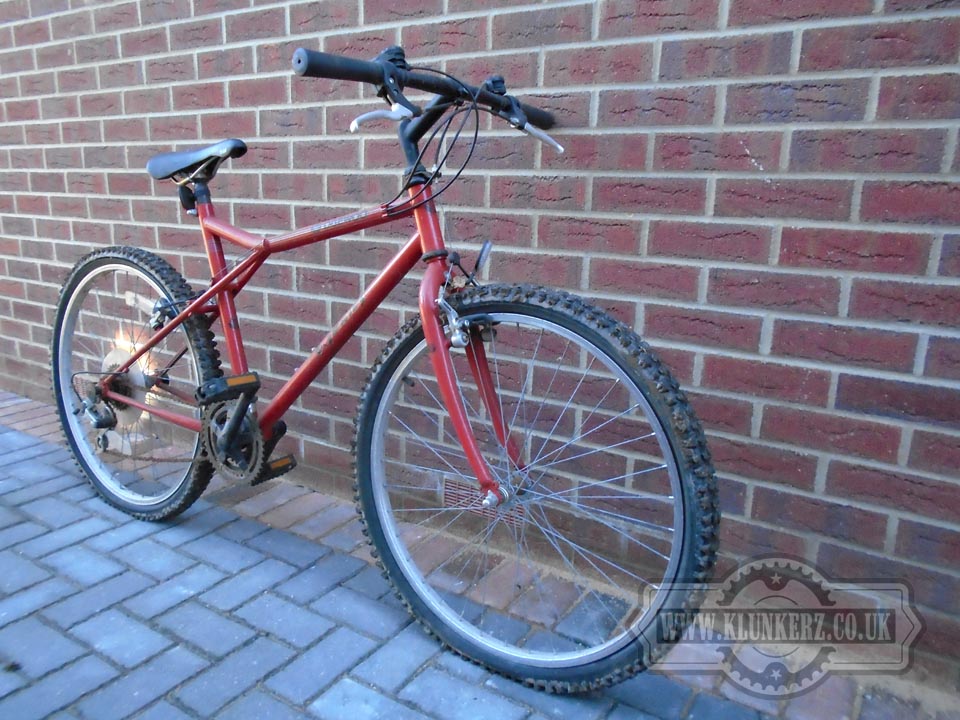 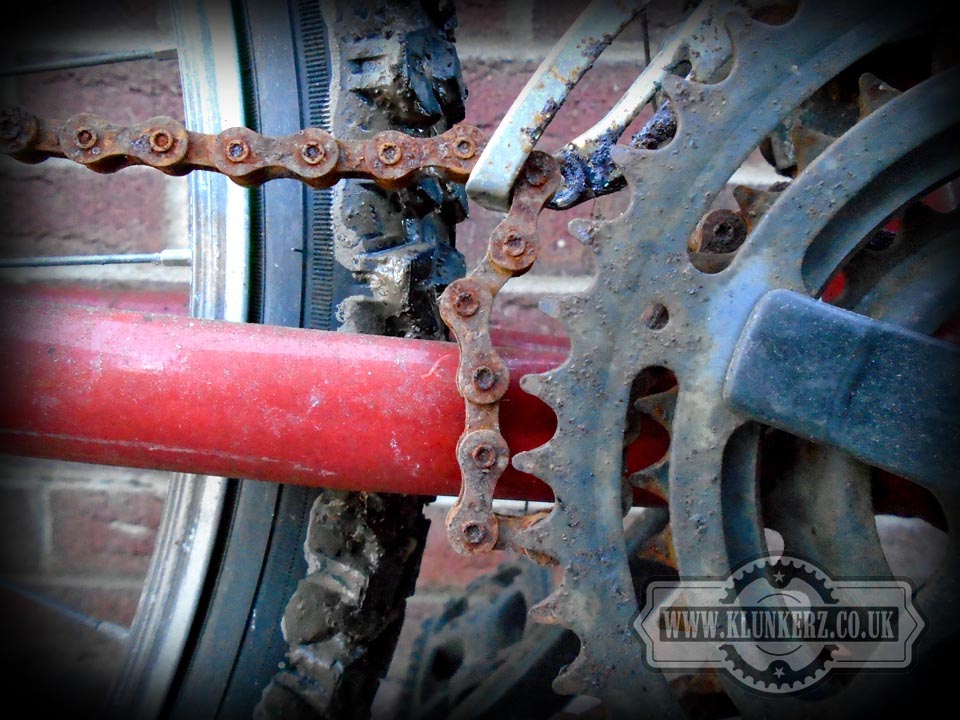 The chain is actually just one solid piece! I have tried dousing it with WD-40 on and off all day, but it's not having it! This chain is probably as structurally solid as the frame. I think even if I left it in a bucket of penatrating oil for the weekend it would still be too stiff to use properly! After faffing around with it trying to get it to free up a little bit I finally just took the angle grinder to it and buzzed it off! Might go back down the tip and try to liberate a chain from something thats already made it to the recycled steel skip. 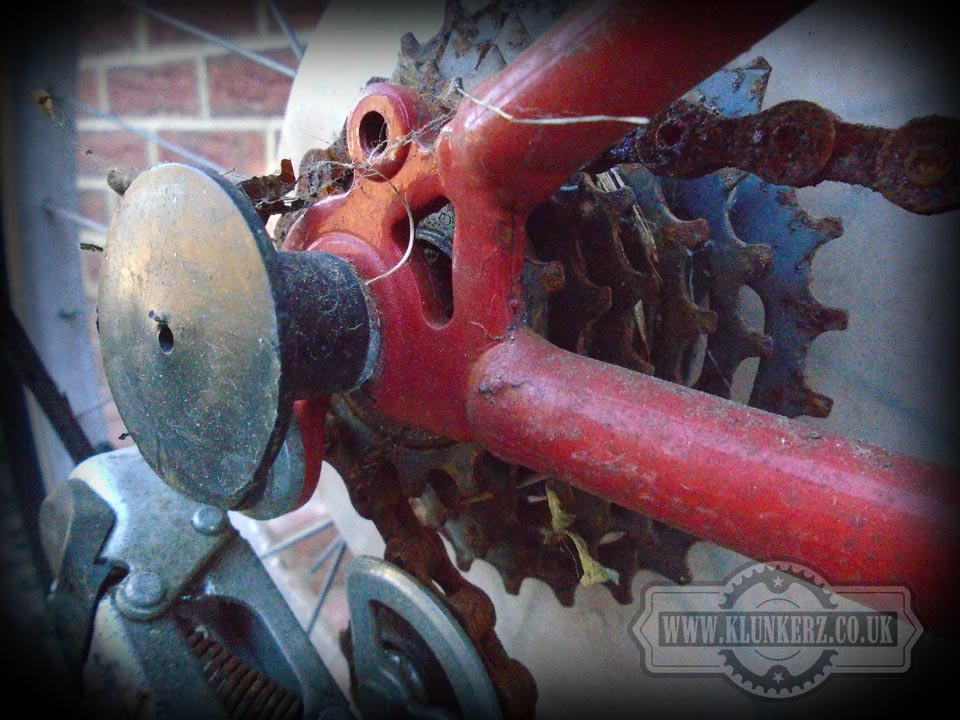 Seriously, I don't think that chain has seen any lubrication for a very long time, if at all, the damn thing was drier than a Nuns fanny! I quite like the fact that it's still got the little plastic protectors that came on the wheel nuts. I've not seen any of those since the BMX days of the eighties when everyone got their new BMX and put the nut protectors back on them after assembly. Pity I don't have the front ones, but I'm going to leave the back ones on it I think. 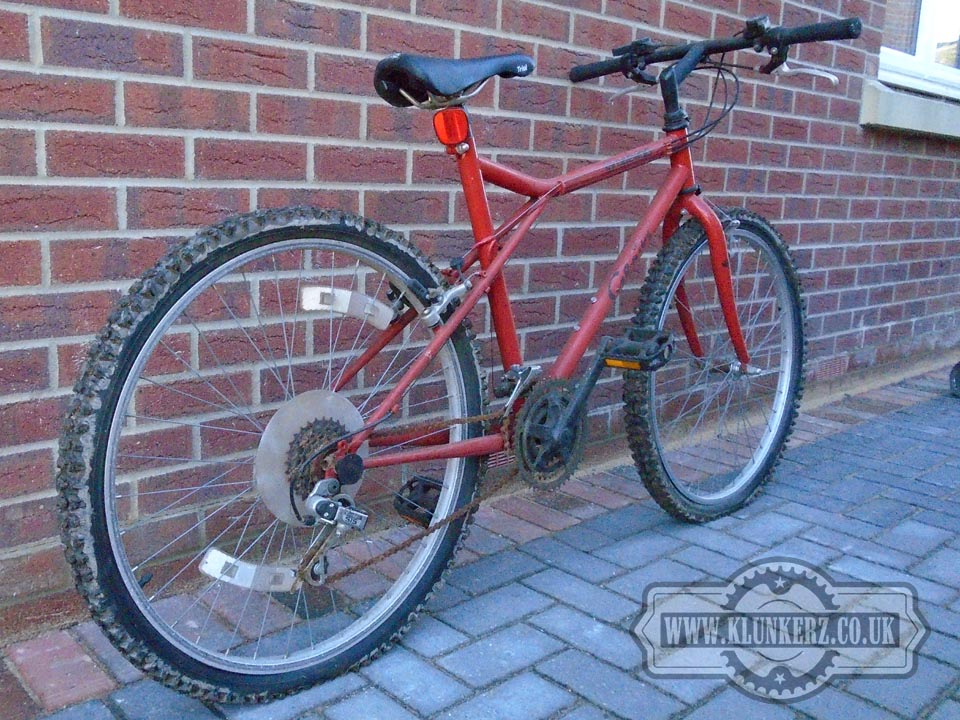 So plans for it? Well, not much really. I think my fettling plans will be limited to fitting a new chain, pumping up the tyres, and cleaning it! I would say that the tyres are amost new in condition, but are probably as old as the bike is. Speaking of that, I wonder how old the bike is? Also, where did they come from, I can't remember ever seeing them for sale anywhere. I wonder if they were part of some sort of promotion and came with a new car? I may well have a quick look into the history of Daewoo bicycles at some point, but most likely I'll just ride it! Although I would actually quite like to know how you would've got one when they were brand new 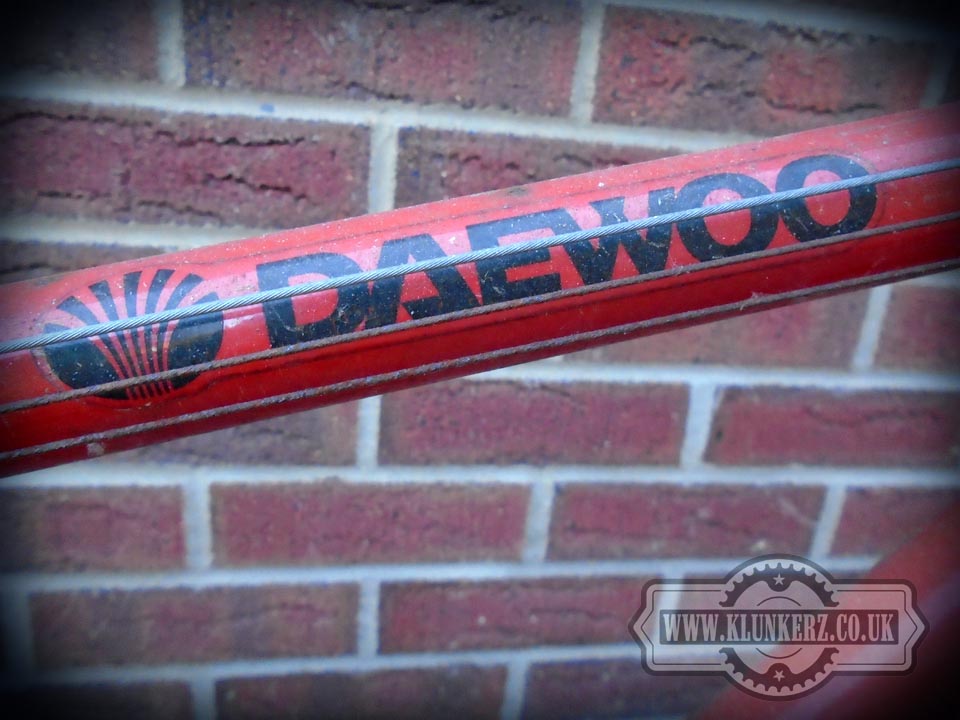 A different kind of bicycle company? That'll be the Daewoo!