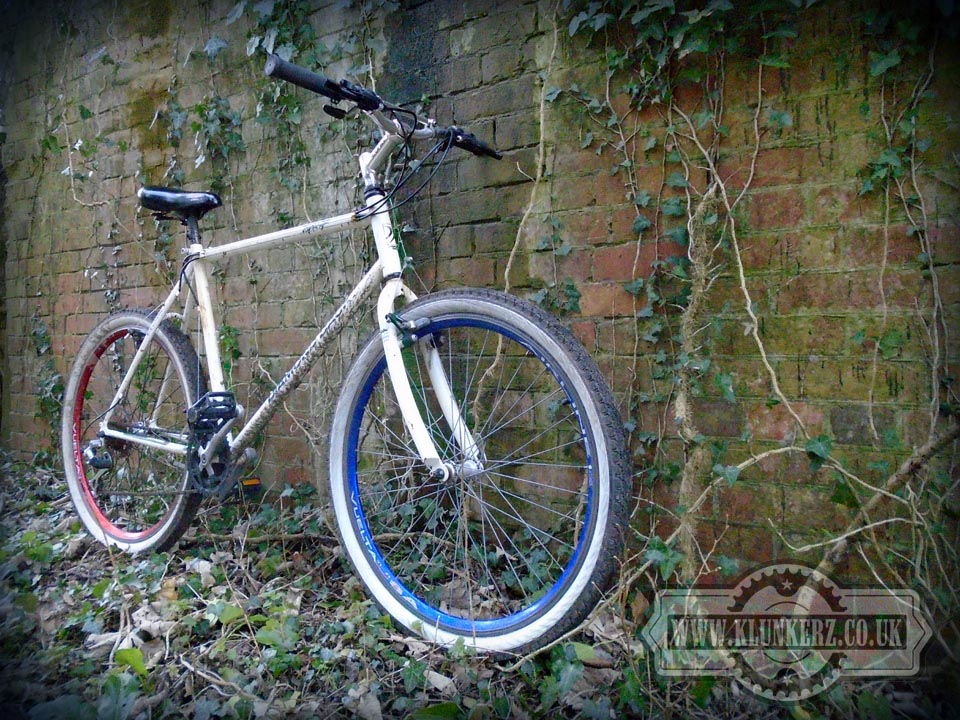 A good raid on my parts stash, and a day or so putting it all together and its finally done! This thing has fought me every step of the way, and several times I've thought to myself that I should just forget it. There are other bikes out there. I even have other bikes that I'd like to get to. But no, I wanted a Diamond Back when I was a kid, and this is my first ever Diamond Back, it was going to get done! 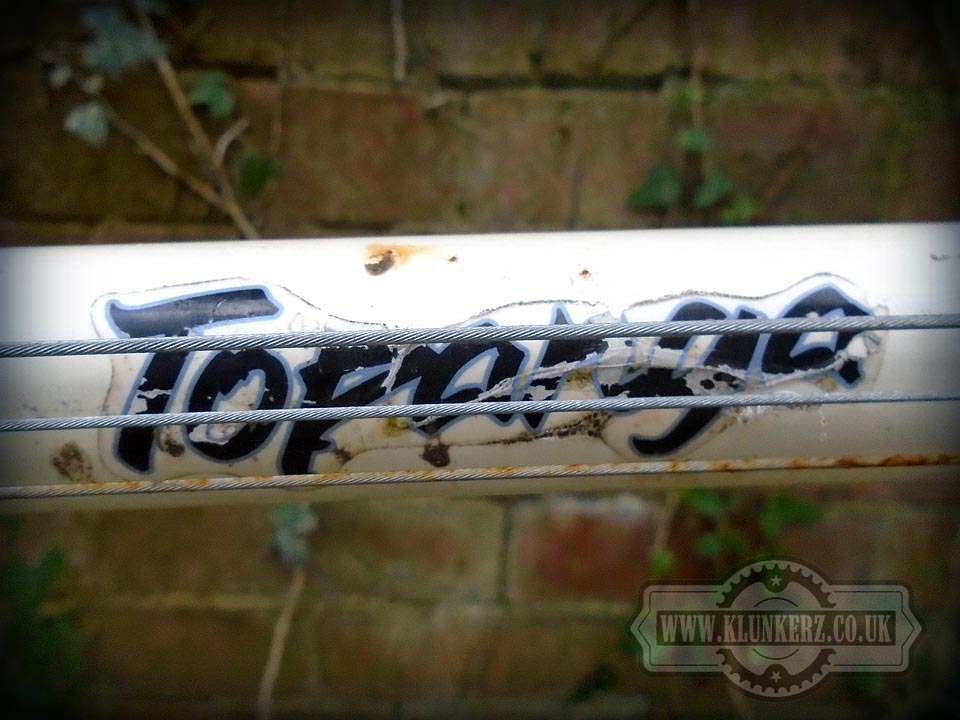 I tried for the most part to keep it 'period correct' and not to add too many things from the wrong era, and I think that with the exception of a couple of items, everything on it could've been put on it in the early nineties... Over 25 years ago!! I think that probably only the wheels and the brake/gear levers are incorrect for the decade. But they look cool to me, so I'm going to let that slide! 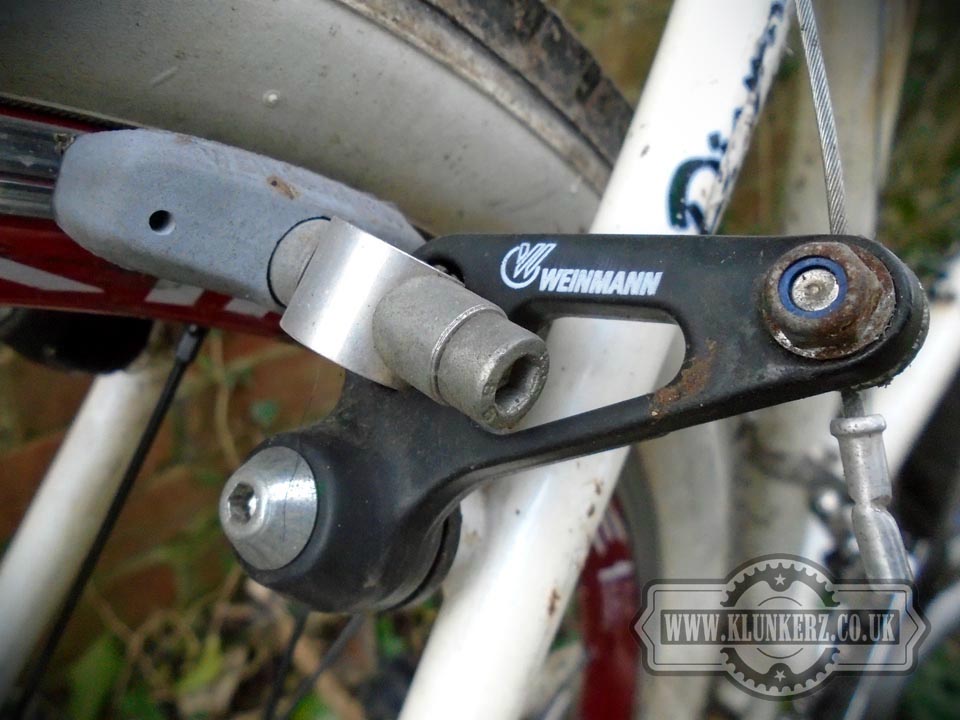 While I was going through my stash a long time ago I came across these Weinmann cantelever brakes. As I rule I never use these, and if I'm playing with a bike I'll usually ditch them if it has them and replace with V-brakes. I always think that the cantilever brakes just look a bit unsightly, and the V-brakes look better and supposedly give better braking performance. I don't know why I kept these Weinmann cantilever brakes, but as soon as I saw them I knew that they were going to go onto the Diamond Back. A quick blast of WD-40 and a good wipe over with a rag, and they looked pretty good, so on they went. Surprisingly after fitting them I stood back to look at it and thought to myself, yep, thats the right choice for that bike! 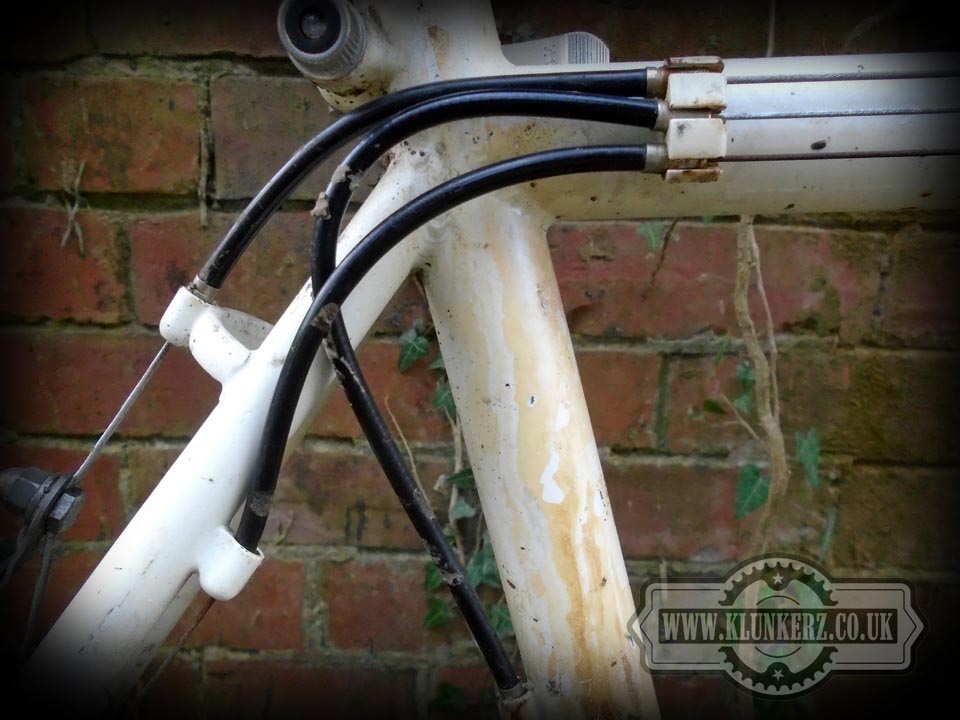 At the other end of that brake cable is the brake/gear lever assembly... 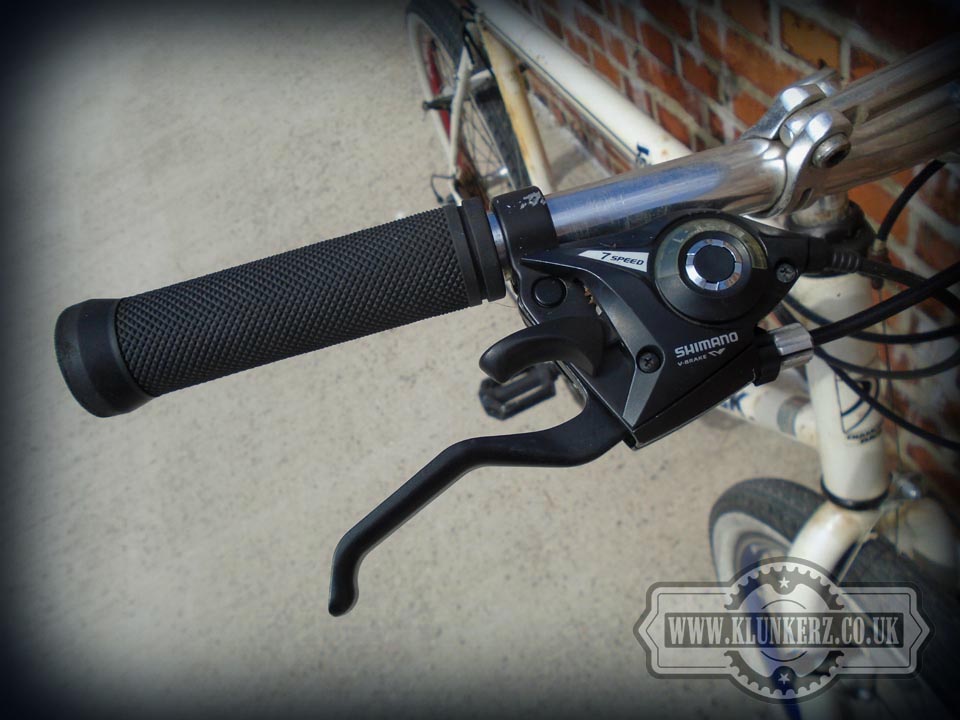 It's fair to say that I was a bit dubious about using this little assembly as its from a far newer machine. However I've always liked the compact little package of a combined brake and gear lever as it just looks a little bit tidier, and less cluttered on the handlebars than having seperate units. So thats why I deviated a little from the plan. I do have a couple of old combined units that would've been from about the right era, but the fact of the matter is that they just don't look quite as good as these do. Besides unless you're a purist it probably won't matter to you if these are a bit newer than the ones that are period correct, because let's face it, if you are a purist, then you're going to want seperate brake and gear levers. Because thats how it left the factory back in the early nineties. 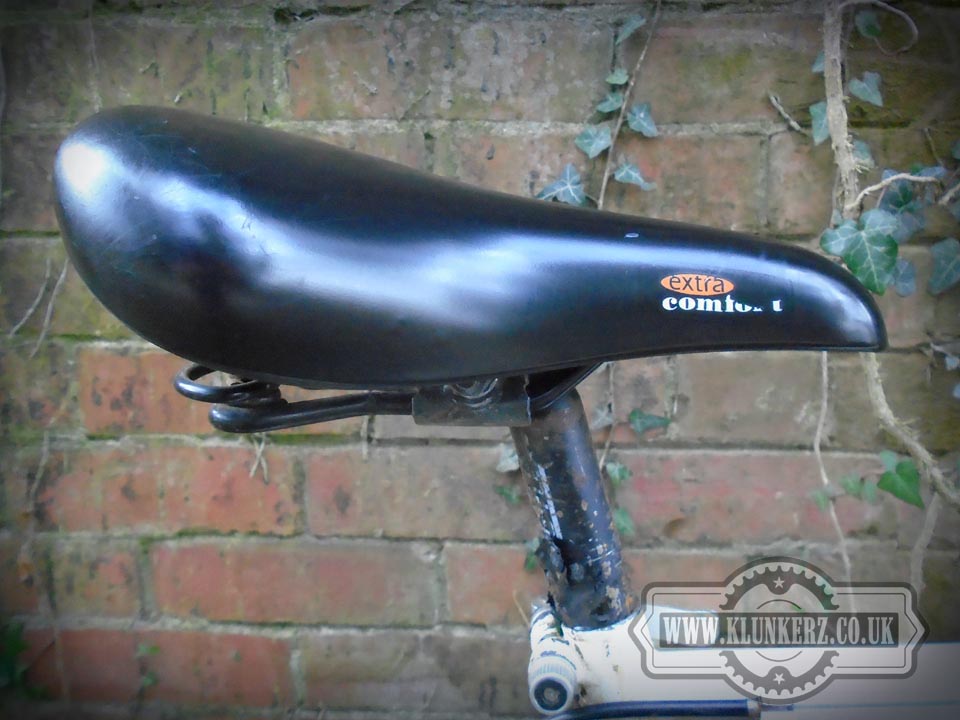 I've no idea where this saddle came from, but I liked the idea that it would provide me with extra comfort, or atleast, that's what it proclaims to do! Actually it's quite a nice shape, well padded, and even sprung. In short, it's quite a nice saddle and it is pretty comfortable. 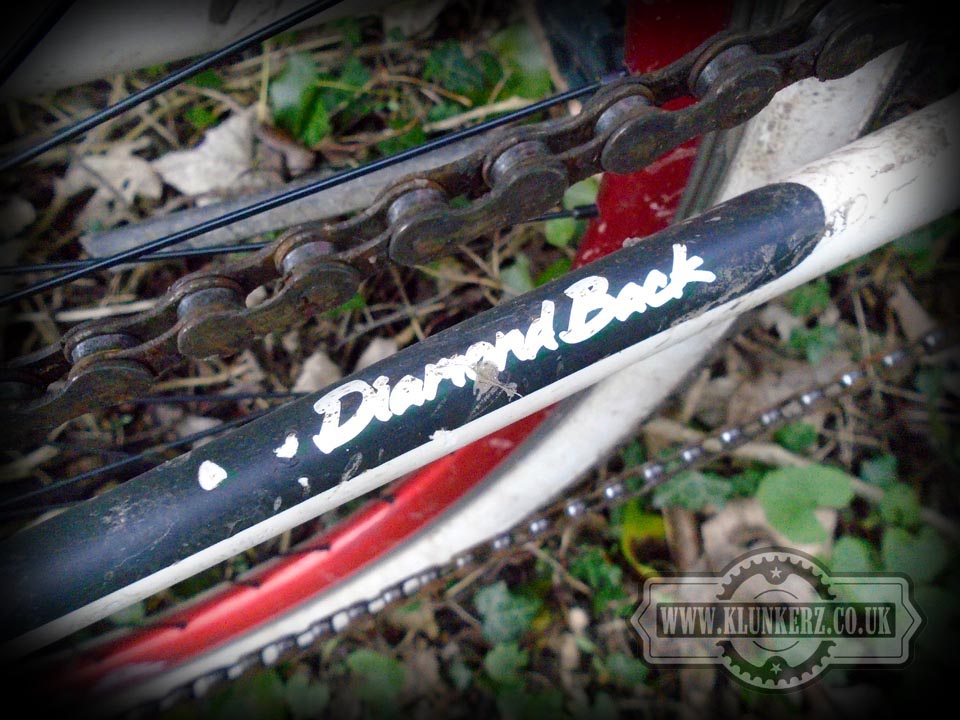 I was planning for fork out a whopping £4.99 in ASDA for a new chain, however I managed to find a good one in my stash, and so after giving it a good lube up, I popped it on. It's not perfect, but it's seviceable, and most importantly, it didn't cost me anything! 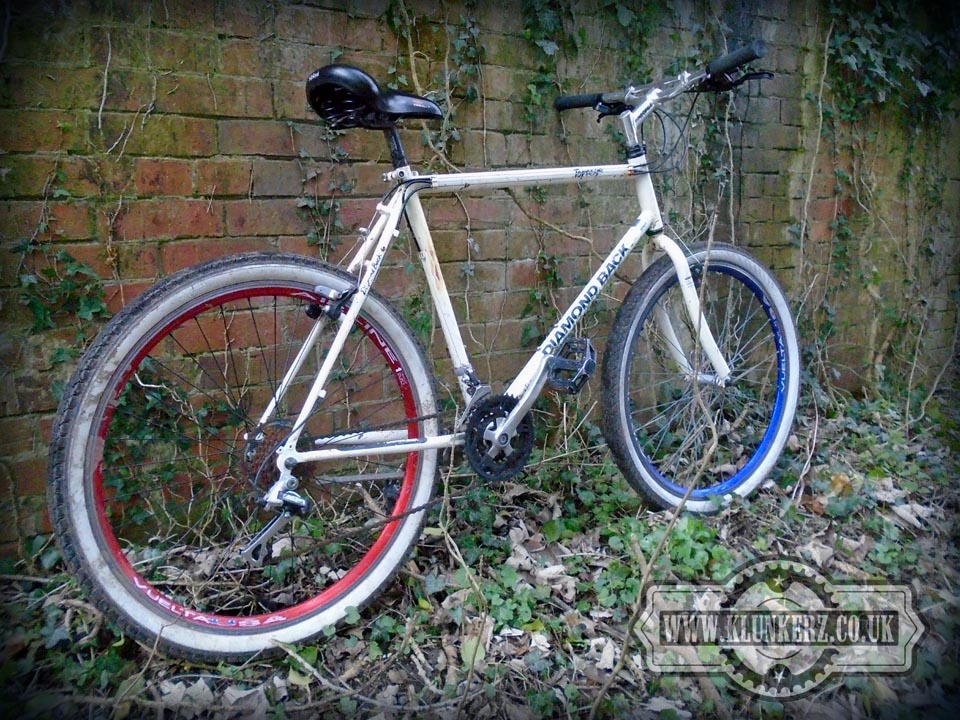 With my Diamond Back Topanga once again looking like something that can be ridden it was time to hit the trail! So, what's it like to ride? Well, I wish I could tell you that its absolutely beautiful to ride. I wish I could tell you that it's perfect, and exactly how I wanted it to be like. But it's not. In short, it's horrible! To me, to look at it, it's perfect, but the ride is a big dissappointment. After all the work I put into making it rideable again, and after all the struggling, I really feel that I should've given up way back when I couldn't get the seat post out! So what's wrong with it? The short answer is that I don't know. It is quite a heavy bike, but that doesn't really bother me, however riding it means that you seems to be putting in considerably more effort than usual to propel yourself along. But my feeling is that this isn't the problem. The big problem is that it's 'twitchy'. It's just not stable when you ride it. When you let go of the handlebars to go no-handed it wobbles about and wants to fall over, and if you're moving fast it's even worse when you let go of the handlebars! I've thought about this, and I think that the problem may well lie here... 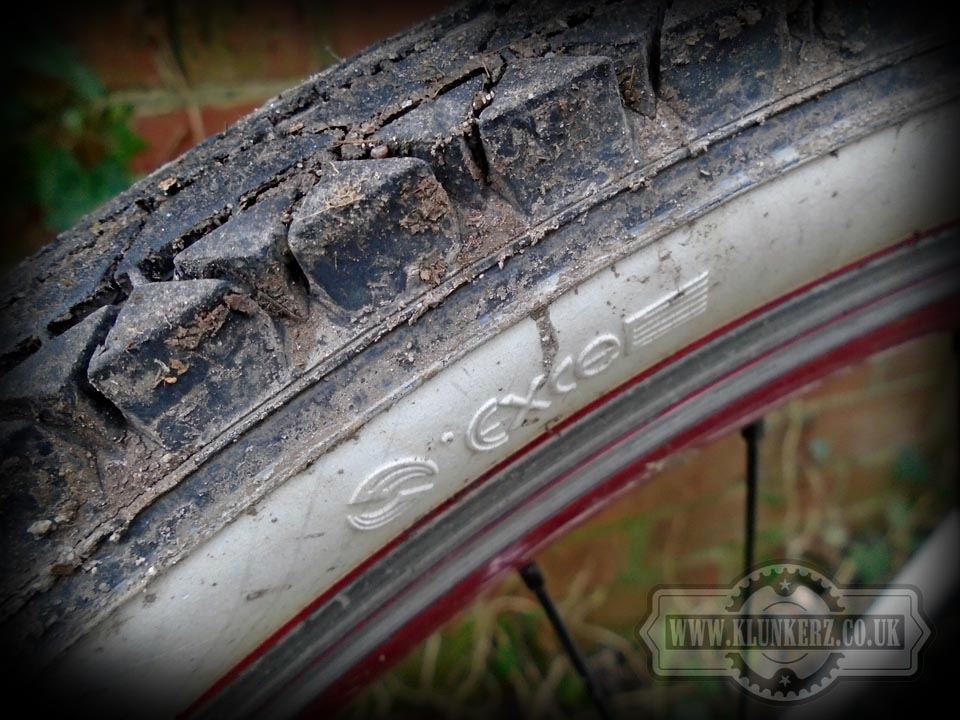 With the very square shouldered tyres. I wonder if the very flat tread pattern and square shoulders are whats causing the bike to be so 'twitchy'? But the funny thing is that I have these very tyres on more than one of my beach cruisers and they're all fine. I can go no-handed on them for miles on end without problem. On one of them I actually went no handed for 14 miles once!! Yep, 14 miles without touching the handlebars once... Oh the magic of a coaster brake! So it would be odd for the tyres to be fine on a Cruiser, but not on this. Unless the geometry of the beach cruiser frame and forks is totally different to the geometry of a mountain bike frame and forks. Which my guess is that it probably is. I'll have to put the two side by side to have a look! The other thing I noticed is that the front and back wheel on the Topanga are not completely in line with each other. The back wheel being off centre by about 3/4". I wonder if I was on normal rounded shouldered tyres this wouldn't matter so much, but because of the flat tread pattern and square shoulders of the tyres I'm using it just accentuates the problem, and makes it far more noticeable. I don't know, but I think that it might be worth my time putting on a normal set of mountain bike tyres and seeing how it goes on them. 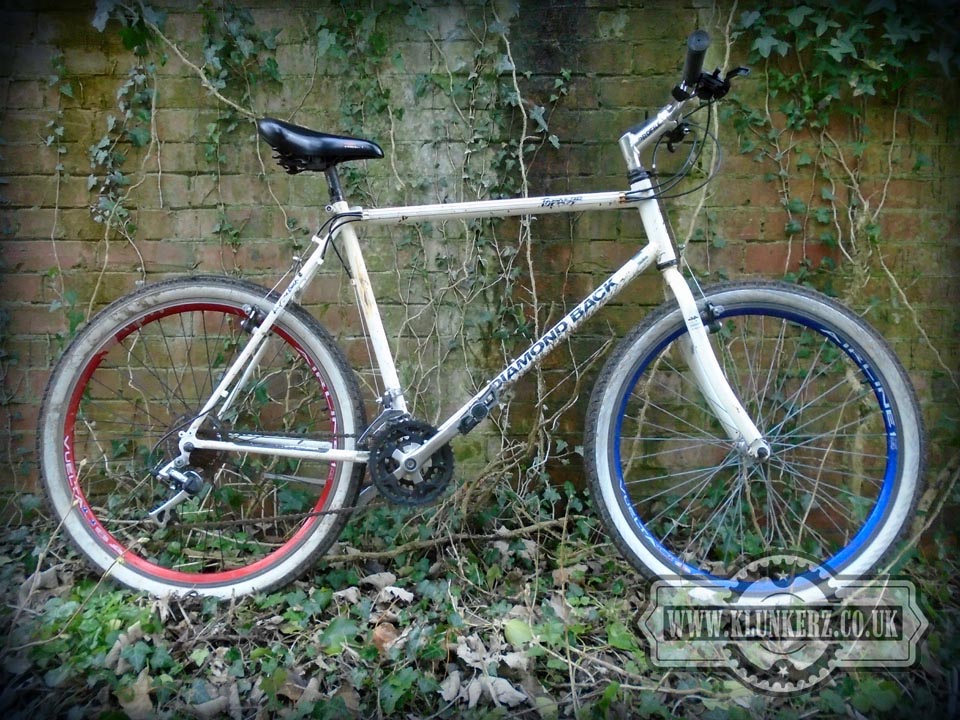 I probably should've given up way back when I couldn't get the seat post out, but I didn't, and I'm not giving up now either! I think at some point soon I'll try a different set of tyres, and maybe a different set of wheels too, just to see how that works out. If it makes it better, then I'll know what the problem is and how to solve it, If it makes no difference I don't know what I'll do. I wondered if perhaps the frame or forks were bent, but after having a good look this afternoon they would appear to be straght and in line, so really it has to be the tyres and/or wheels doesn't it? I don't know, all that effort and it's back to the drawing board to re-group, and re-think about the thing. I'm not done with this thing yet, and I think that with some tweaking it could still be a good bike, but perhaps I was a bit premature at the start of this post... It's finished... ISH!!