January 21, 2019
I had some errands to run today, one of which was a trip to the tip to dump the Christmas tree, amongst other things. I figured, that as I was going that way anyway I would go and get a few odds and ends from my garage that needed to go while I was about it. The journey to my garage was uneventful, but the journey back and to the tip took nearly 45 minutes, which was a good 40minutes longer than it took me to get to my garage! The road that leads to the tip also leads to various other places including BelongaClint, and the M3, so I'm sort of used to queuing along there, but even so, this piece of road is about half a mile long, so this was ridiculous, especially as there was a steady stream of traffic coming the other way. I wondered if perhaps there had been an incident on the motorway, but as I neared the part of the road that lead to the tip I could see the problem. This was laying in the road on my side. 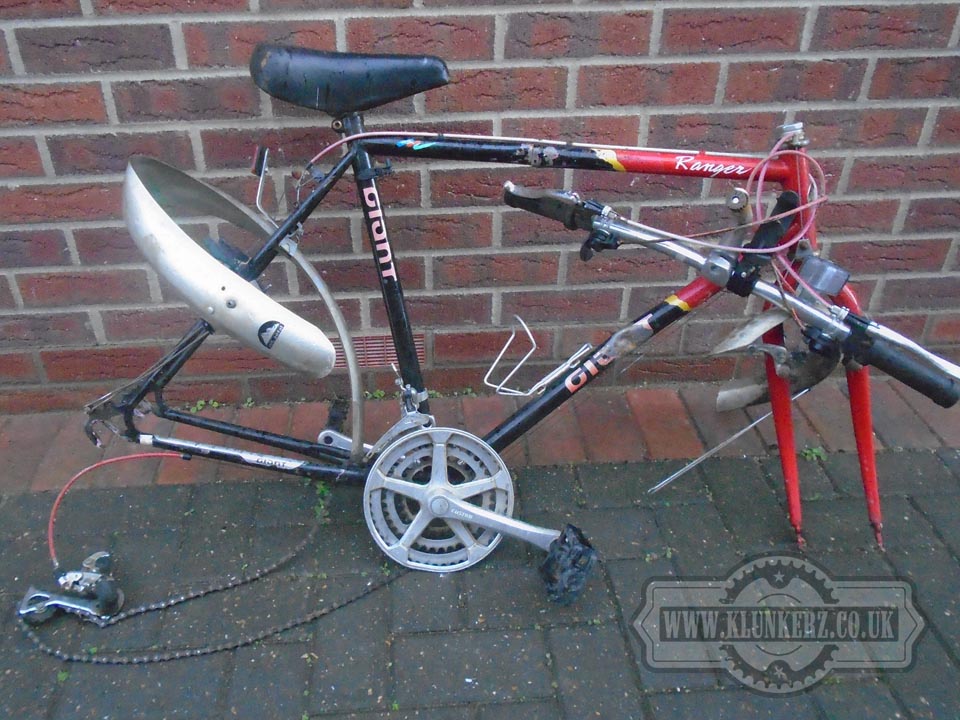 A Giant Ranger. We had all been queuing for over forty minutes because each of the 100 odd cars in front of me had waited for a break in the traffic, so that they could drive around it! I couldn't believe it, how hard would it have been for one of them to just take it off the road, and lean it against the wall by the pavement? I stopped the Scorpio, and got out. No sooner had I done this than the man in the car behind me started blaring his horn at me, I looked at him, waving his arms about and gesticulating at me. I walked to the front of my car, and picked the bike up, I figured as I was heading to the tip anyway I might as well take it with me, and so I popped the boot of the Scorpio open, and placed it inside. I closed the boot, and then, before heading off I thought I would see what the chap in his Nissan Micra wanted to chat about. As I approached his car he looked less and less angry, and started to roll up his window. Unfortunately for him what he didn't do was lock his door. I opened his door, and said, can I help you? He said that he didn't need any help, he was ok. So I said but I thought he was blowing his horn at me, waving to get my attention and stuff. He said it wasn't him, he didn't blow his horn. I lent in and pressed his horn button twice... BEEP! BEEP!! I said well that's funny, because the horn I heard sounded just like this one. But he continued to tell me it wasn't him. I said, well thats fair enough, and I wished him a very pleasant day, and thanked him for his patience while I cleared the bike frame from the road, then carefully closed his door. I got back into my car, quite pleased that I managed to not have a full on Victor Meldrew meltdown!

I arrived at the tip and before just dumping the Giant Frame I gave it a good looking over. It was quite damaged. My feeling is that it probably fell off a lorry that was taking away scrap to be recycled. 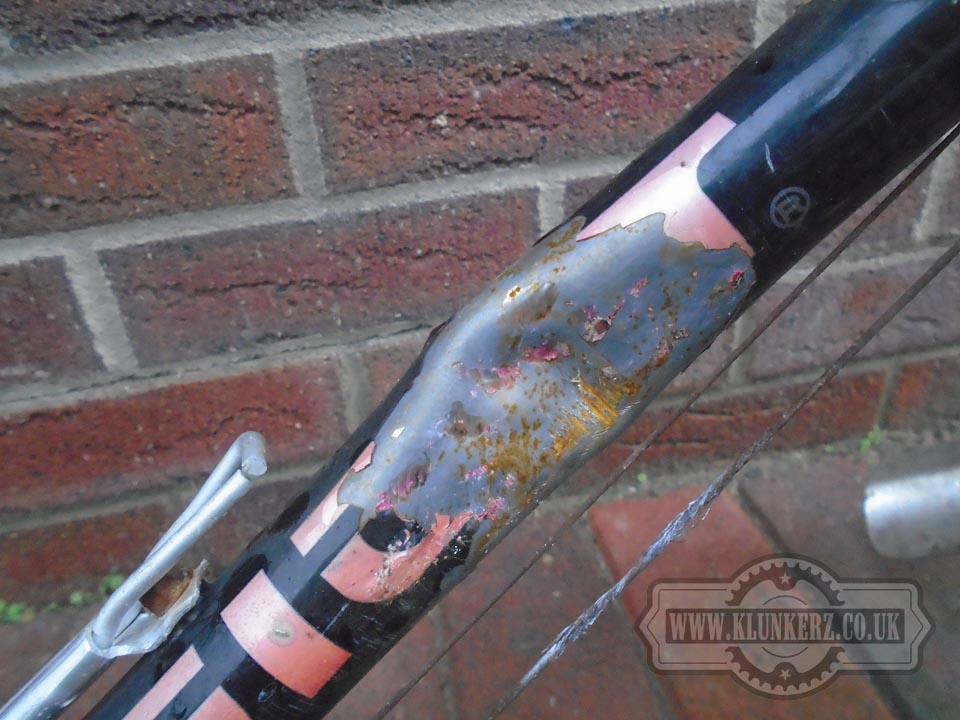 It was dented badly and even split in places. Really there would be no fixing that frame. But I thought if nothing else it would yield some parts for my stash, so I didn't chuck it in the metal bin just yet. I did however chuck some other stuff in there and while I was doing that of course I had to have a look, and there it was, laying on top of all the rubbish... 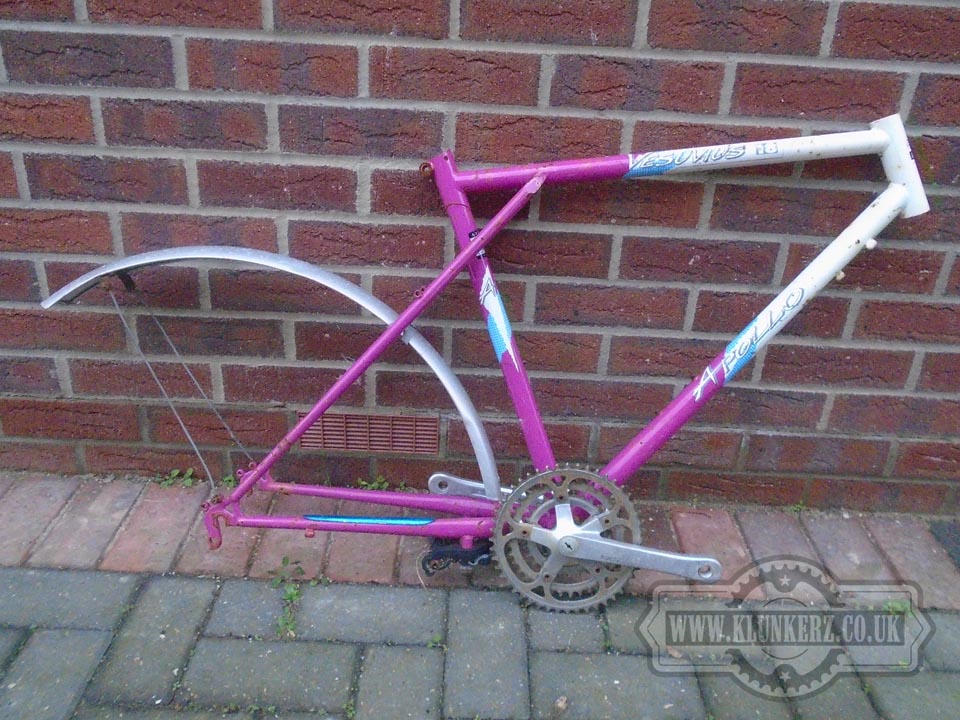 I couldn't reach it, but I could reach a paint roller with an extendable handle. I reached in with my new long hook, and got it just as one of the workers at the tip yelled, "Oi, what you doing in that bin?" I said I'm fishing, and I'm not in the bin, and pulled the frame out. As it was already in the bin he gave me the frame, and I headed off back to BelingaClint fairly sure that I could take the good bits from the damaged Giant frame and put them on the half decent Apollo frame.

I wasn't really after another frame, as I've already got a few that I am in the progress of turning into complete bikes, but I'm not one to look a gift horse in the mouth either. I figured I'd do this quick, and so I set about dismantling the Giant. Pretty soon I realised that it was only the frame that was damaged, and after pulling a suitable set of wheels from my stash I was looking at this. 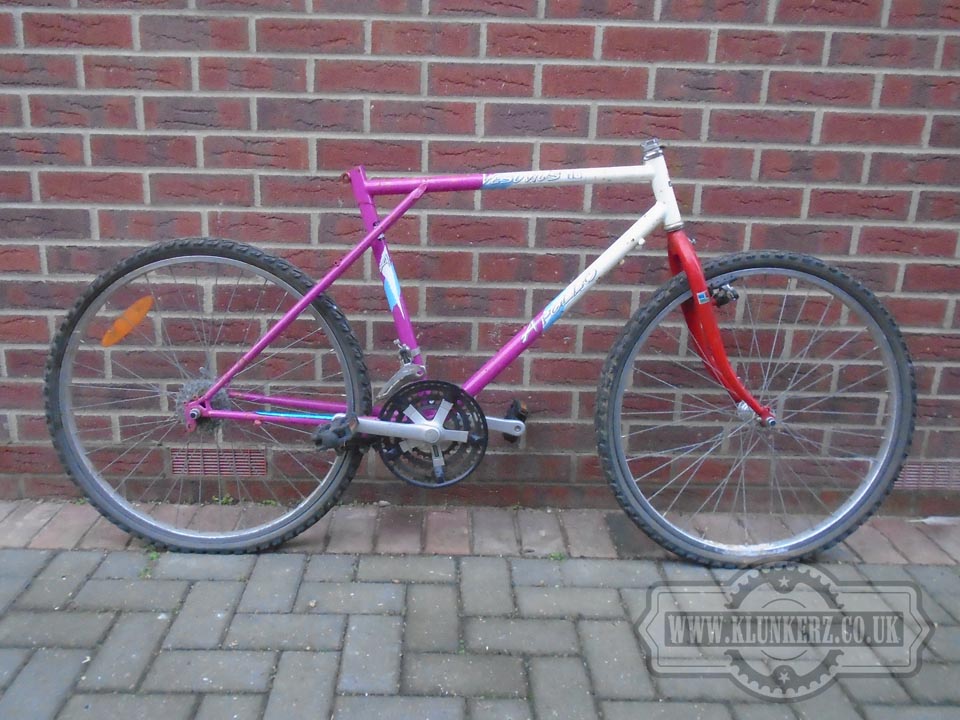 Pretty soon the handlebars, saddle, and pretty much everything else from the Giant had been transplanted on to the Apollo. 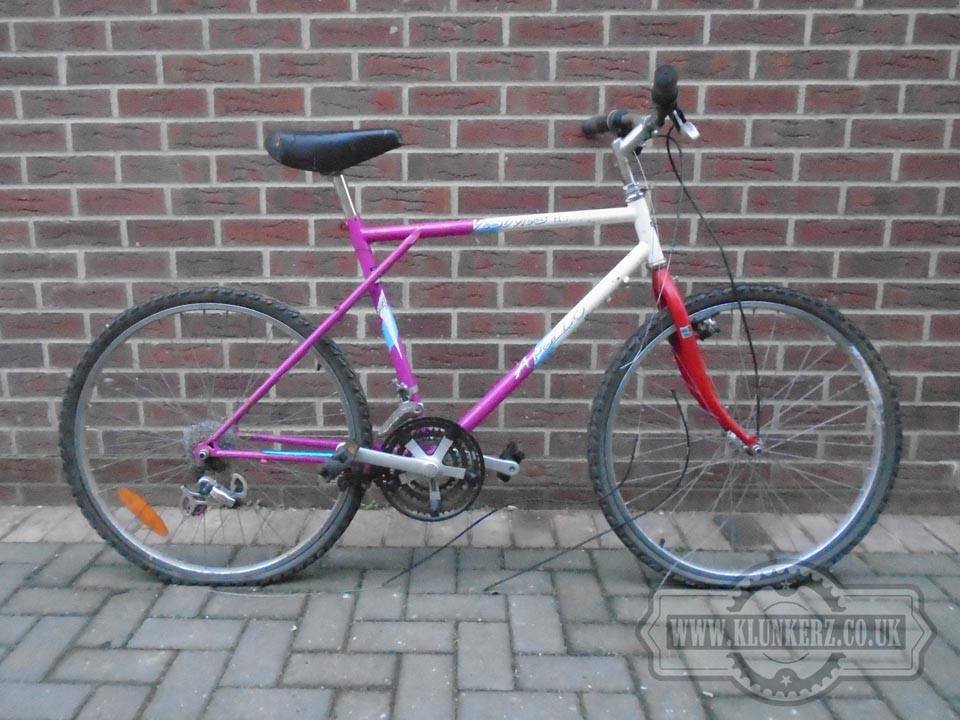 It wasn't even mid-day yet, and I was looking at just popping a chain on it, and running the cables. Before long I was thinking that it was done, but then I thought that I might as well take it a little further, as I still had the mudguards from the Giant, so they might as well go on too. 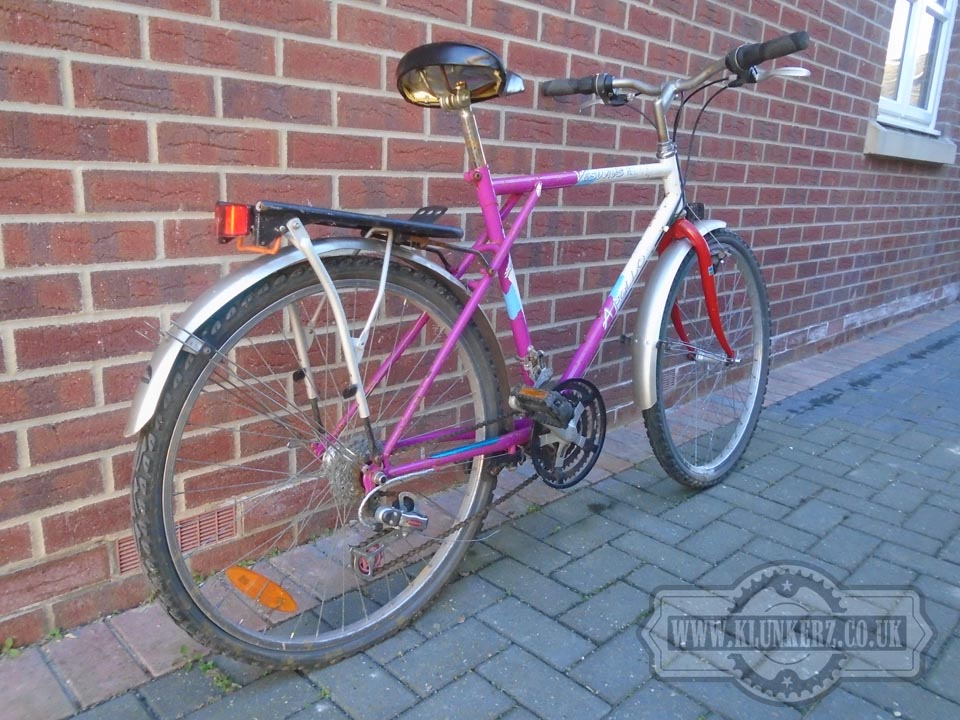 While I was about it, and I have no idea why, but I decided that I might as well fit it with a rack, which for me was quite an odd decision as usually thats the first thing I take off, which is why I have so many of them in my stash. If any of you guys reading this would like a free bike rack, let me know, I've got quite a few! 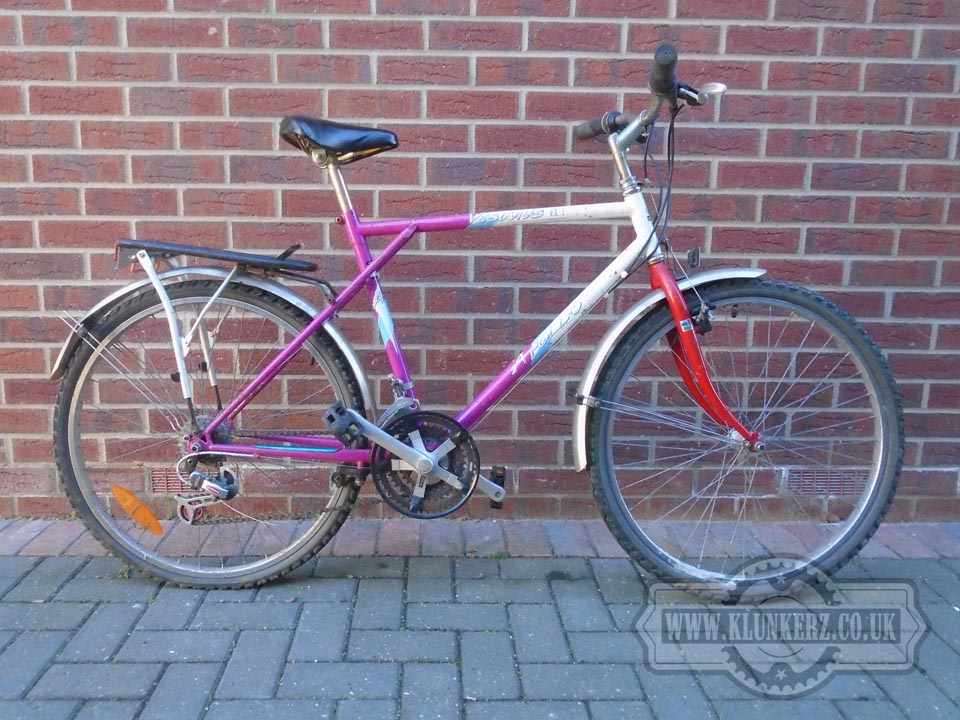 By lunchtime I had gone from two pretty much worthless frames, to one worthless frame and a worthless bike! It has to be said though that I was felling pretty chuffed with myself for putting this little thing together so quickly. I decided to take it for a quick test run around the block to see what it was like. 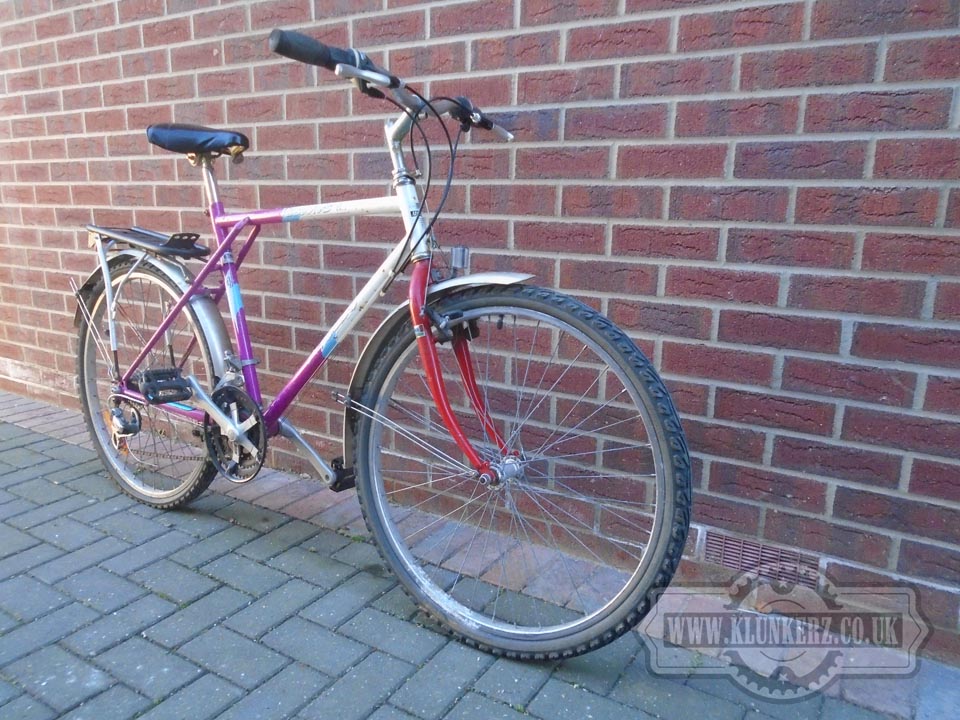 It was ok, nothing particularly memorable about it, but definitely ok. it does everything you would expect a bike to do, and it does it ok. the thing is, I don't know how old the Giant Ranger, or the Apollo Vesuvius are, but my guess is that they both came from the late eighties, or early nineties. But, and I know I've said this before, I find that even the cheap bikes from that era, ride better than so called half decent modern bikes. They just feel a bit sturdier, a bit better put together. Anyway, I was so pleased with it that I strapped the Giant frame on to the rack, and cycled off to the tip. I arrived at the metal bin, and started untying the Giant frame from the rack, the guy who was working on the metal bin said, "Back again?" I said, yeah, I love it here! he looked at my bike and said, "Thats not the frame you fished out of here earlier is it?" I told him that it was, and it's pretty damn good! I asked him what he thought I did with the frames I pick up. He told me that he thought I just sold them on as bare frames, he didn't realise that I turned any of them into complete bikes! So I told him that prety much every bike he sees me ride often started as just a frame. Of course, coming to the tip for a second time proved to be troublesome, as it meant I bought a bike that someone had brought in between me being their the first time, and me being there the second time, but still, I guess this gives me something new to ride, and for me to tell you about next time!