June 07, 2019
I don't like to ride in the rain. As I was getting ready for work this morning I looked out the window and it was tipping it down! I thought to myself, Ugh... Rain! I could've walked the half mile or so to work under an umberella, or even taken the car, but that would've meant that I didn't get time to go for a ride, and as I've ridden almost every day this year so far I wanted to continue that habit. I guess I could've worn some sort of waterproof clobber, but the trouble with that stuff is that I sweat while I'm wearing it, and so I end up soaking wet anyway! As I had a day of working outside as it was I figured that I might as well get wet, and stay wet! I headed out... 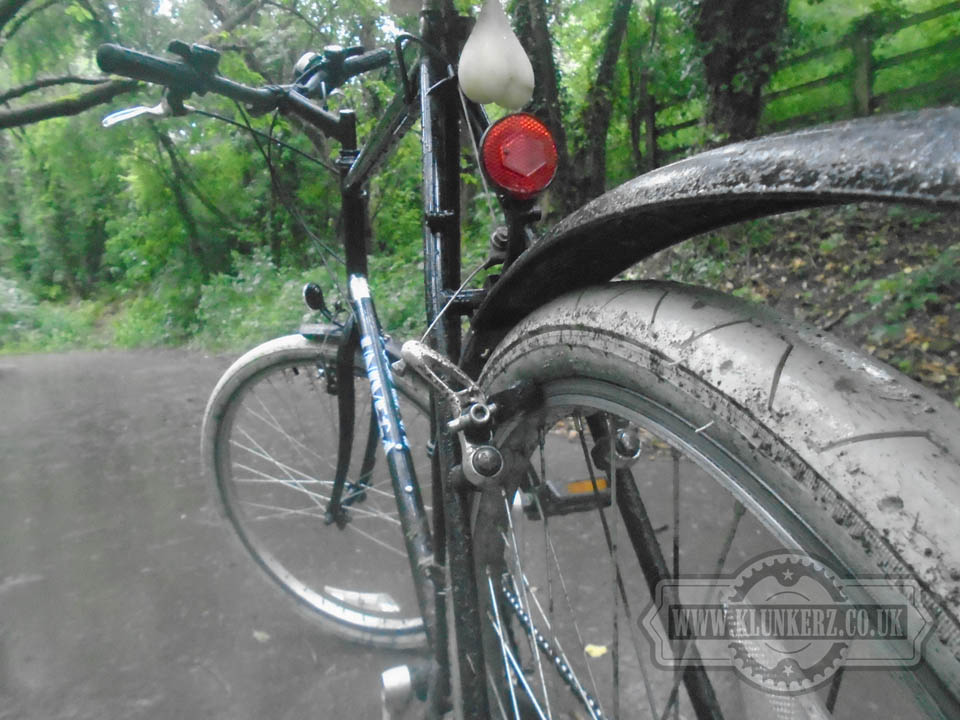 I thought that my best route would be my forty minute route as it was mostly paved, and therefore wouldn't be too muddy. As I was blazing along the cycleroute I thought that there were distict advantages to riding in the rain. Firstly there were not so many people about walking their dogs, secondly there wasn't too much pollen around to get up my beak, lastly, and probably most importantly, there were no damn flies about. Just lately almost every time I go out, despite wearing glasses I get a fly in my eye, nose, or mouth... Disgusting! 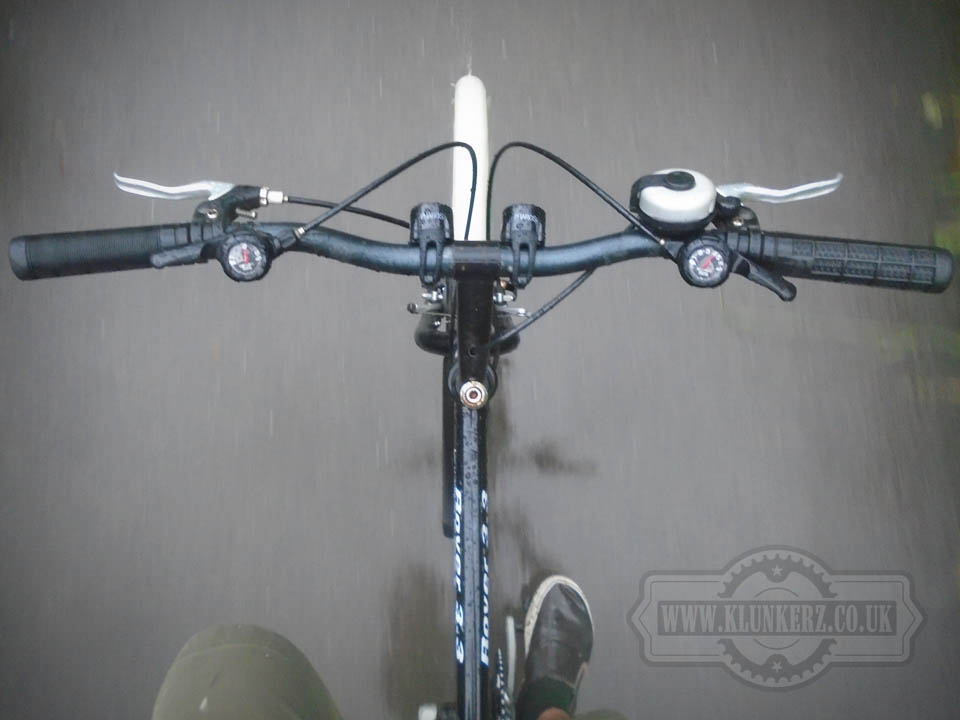 I doubt that I'll get to the point where I'm wishing it was raining while I'm out on my ride (unless we have some sort of plague of flies) but the break from chewing on those pesky little midges sure was a welcome relief! Although my protein levels are probably down today because of the lack of bugs in my diet!

The ride out despite being wet, was pretty uneventful, and before long I had reached the point where I turn around and double back towards work. On the way back however not ten minutes after riding along this piece of path for the first time today I was finding that I needed to stop. 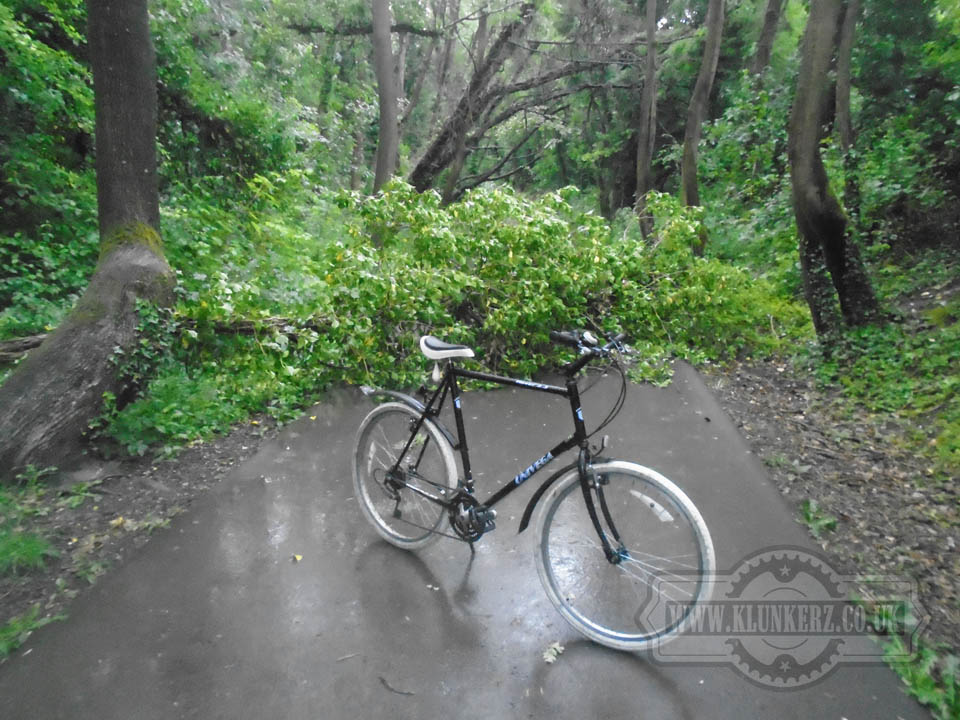 It wasn't particularly windy, but in the time it took me to ride the last quarter of a mile or so to the point where I turn around, and head for home again a large piece of tree had fallen across the footpath! I'm pretty glad it didn't fall when I came past it the first time! I had a go at moving it, but it was wedged in, and all I was managing to do was shake the water off the leaves on to my already wet and cold clothes. So I decided that I'd just carry my bike over it. That didn't exactly go according to plan either, and some how I managed to slip, or trip, and landed on my well cusioned ass in a muddy puddle! Great! I was wet before, but now I had the added benefit of a mud bath too, still it's supposed to be good for my complexion or something! 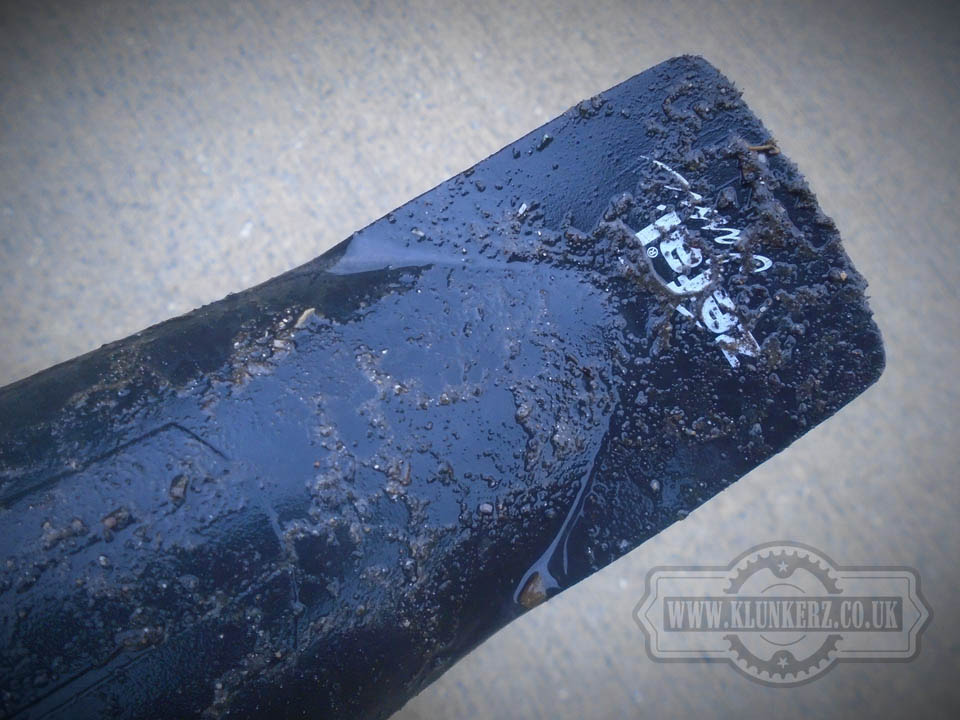 I picked up the Univega, and headed on, atleast I was on the right side of the tree now! When I arrived at work, soaking wet, I noticed that not only was I muddy on my bum from the puddle, but I also had a muddy streak up my back too. It's funny because I installed these Mt. Zéfal mudguards in the hope that I could ride with getting the muddy streak, but apparently not. I'm guessing that they keep the majority of the water and mud off me, but I still got a fair bit even though the rear one hangs directly above the trailing edge of the rear wheel. I would've thought that nothing would be spraying up behind me, but I'm oviously leaving a rooster tail behind me when I ride in the wet! Still, I probably shouln't complain, I mean I didn't exactly pay from them, I took them off a bike at the tip, and fitted them onto a bike I was buying in order to transplant them to my bike when I got home. So from a value for money point of view they are exceptional value, and like I say, they probably keep 80-90% of the water and mud off me, and that is quite beneficial. 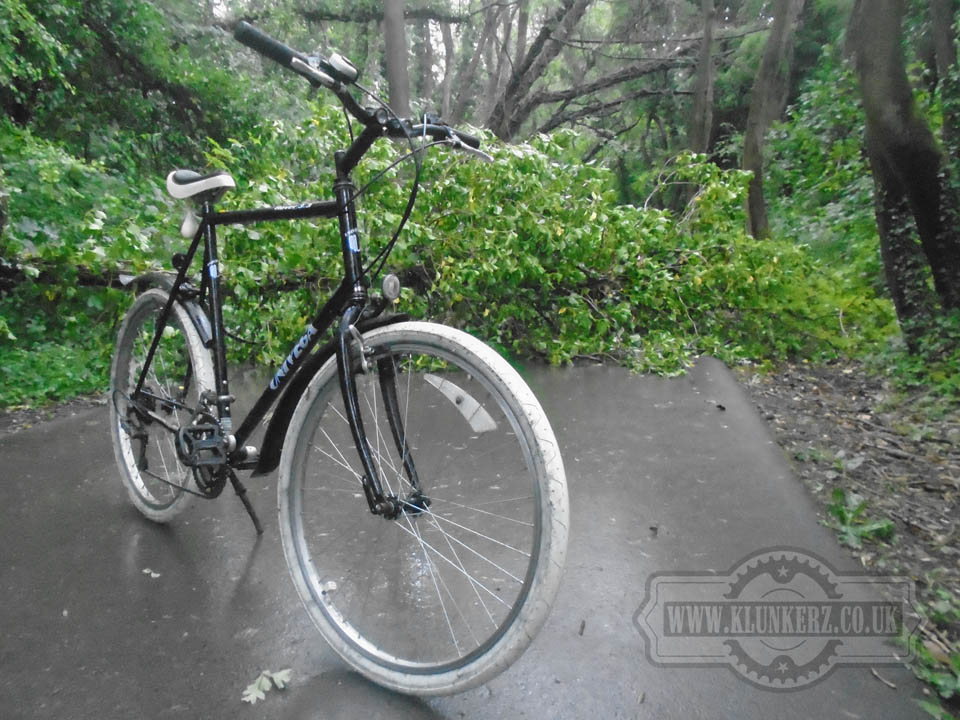 I suppose that the only way I could improve on that would be to fit full, and tyre hugging mudguards, and frankly I don't want to go down that route. Or atleast, not with this bike. Plus, when you're soaked to the bone anyway, does it really matter if you've got a bit of a muddy stripe up your bum and back anyway? Probably not!