July 29, 2019
I know nothing about Kona bikes, other than they must be pretty good because in all the years skip diving I've never found one at the tip... 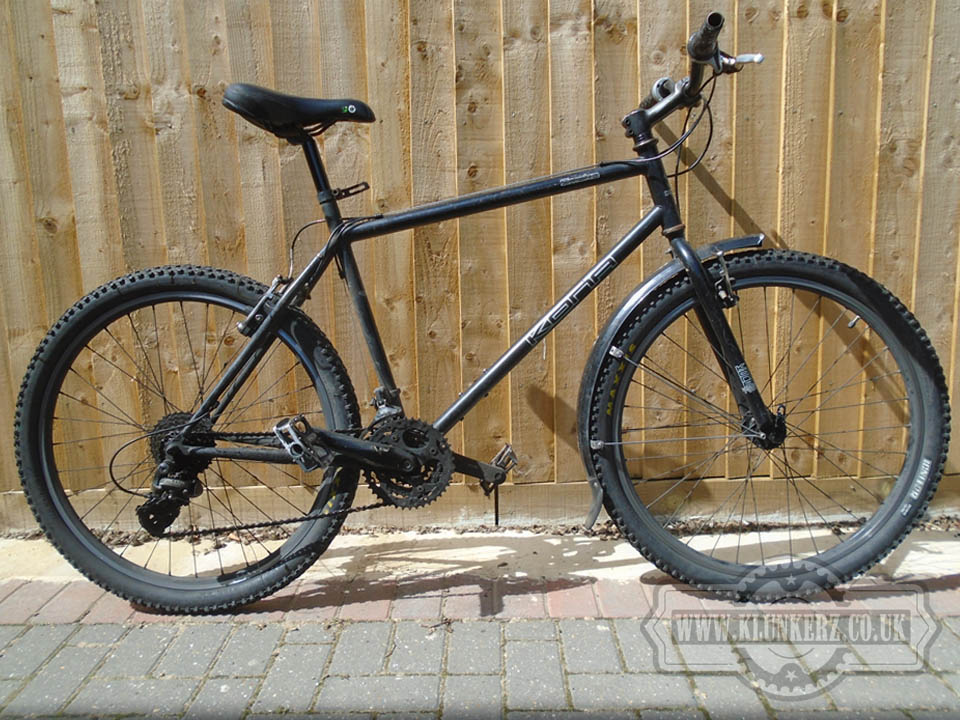 Until today! I grabbed it, along with a small selection of other bikes, and headed for BelongaClint. 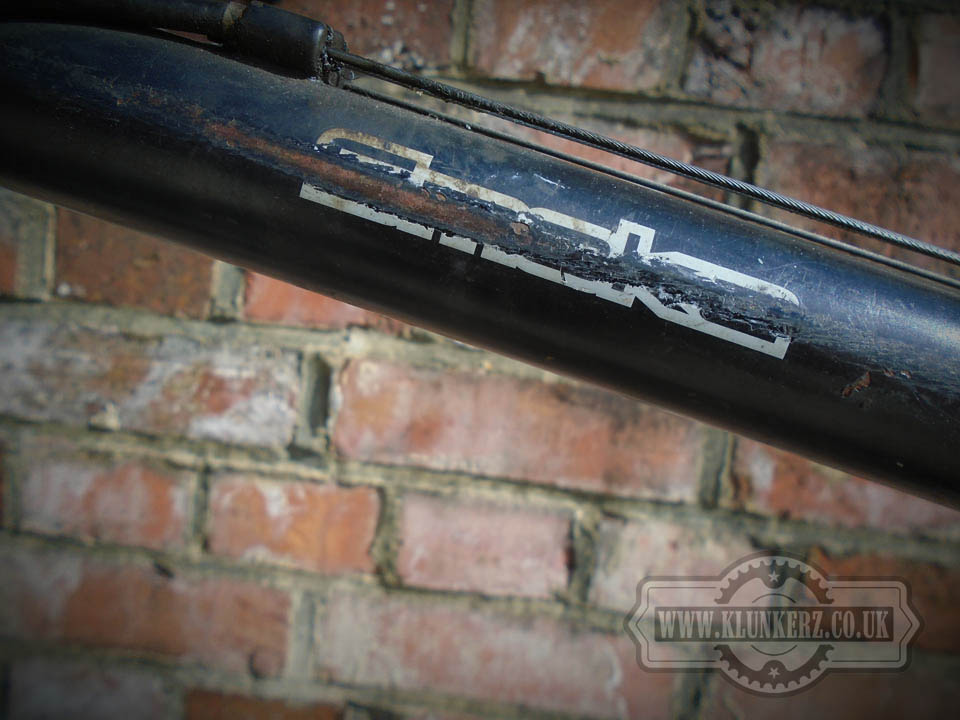 It's a Kona Smoke I believe, although it's a little difficult to read as the decal is worn off on both sides. I also think that it is ten to fifteen years old. Condition wise it's averagely average, and although I wasn't shopping for bikes for me, as I'd never had one before I grabbed it. However before grabbing it I gave it a quick look over to see if it was immediately obvious why it was there, it was... 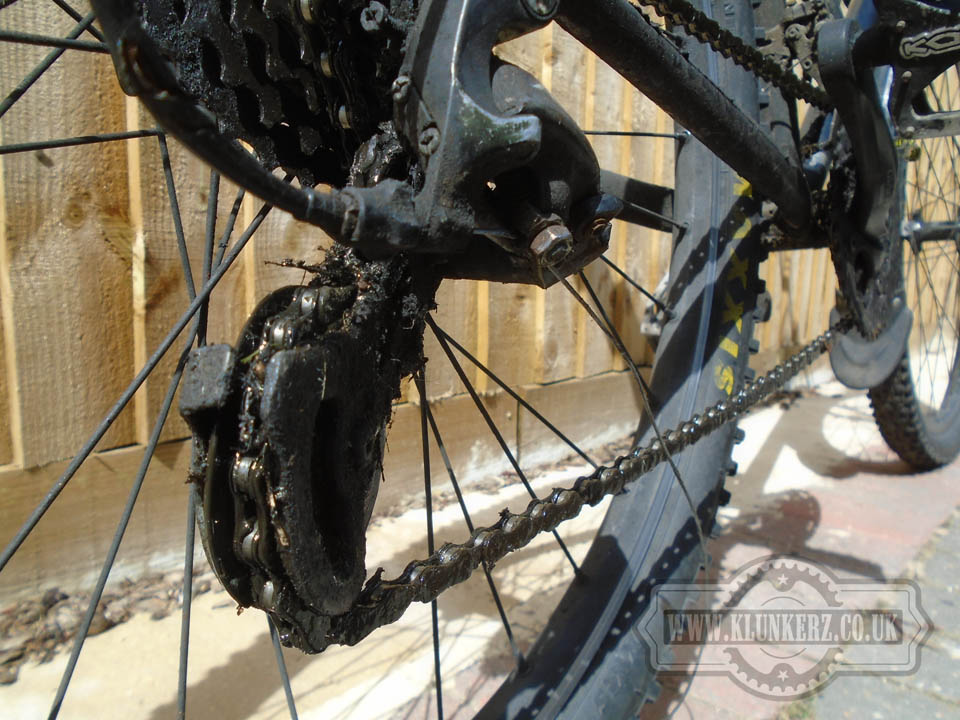 The rear derailleur is müllered! It looks like whoever owned this bike has got it caught on something while they were riding, and as a result its twisted, and the chain doesn't pass through it too easily. I had a quick look around to see if there was anything that could donate a rear derailleur. As luck would have it there was a broken Diamond Back frame that still had the derailleur attached. I grabbed that too! Having a pick up again is proving to be a pain in the bum as I can drag even more crap back to BelongaClint than I ever could with the car. I loaded it up with bikes and parts and headed for home. Once home the derailleur was quickly removed... 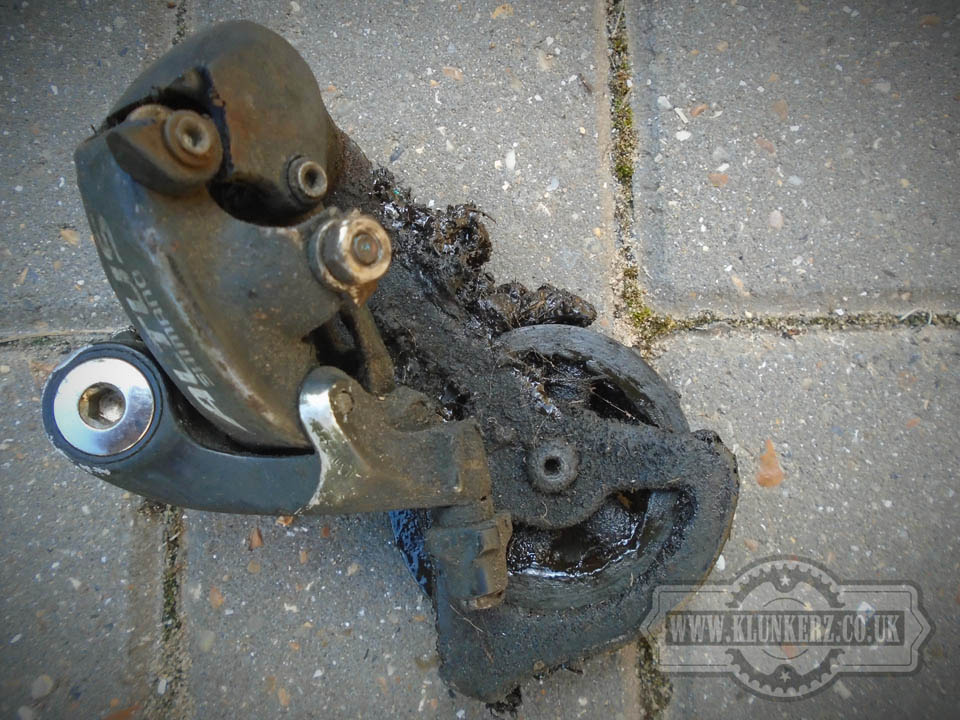 And dispatached to the bin, everything, and I mean everything on the drive train is caked in a sticky goo, which I'm guessing is actually some sort of very thick grease. It's pretty horrible, but carried on regardless.

Before long the new rear derailleur was on, the chain was back on, the remainder of the front mudgaurd was in the bin alongside the old derailleur, the brakes were re-connected, and everything had been checked for tightness. I was ready to ride it! So what was it like?

Dreadfull!! I was expecting it to be really nice, but it really wasn't. I don't think this is through any fault of the Konas manufacture, or design. But it's because whoever owned this bike has got every pennies worth out of it. In short, it is worn out! 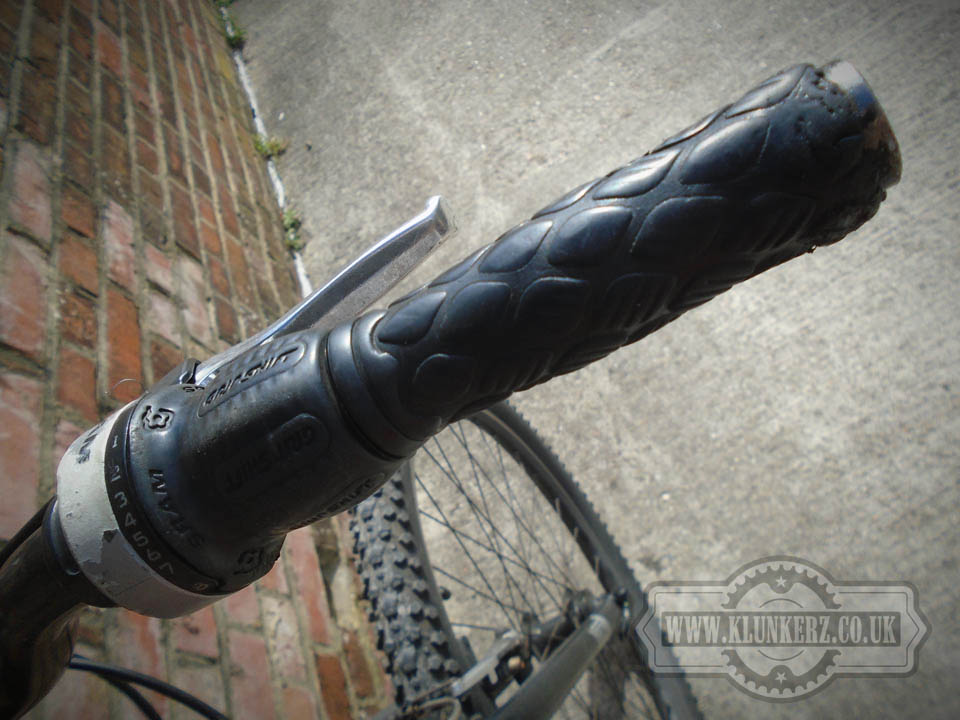 I reckon that this Kona has been thousands, if not tens of thousands of miles! Everything about it has loads of wear on it. The grips are quite smooth, and the grifter-shifters don't even click as you change gear anymore. 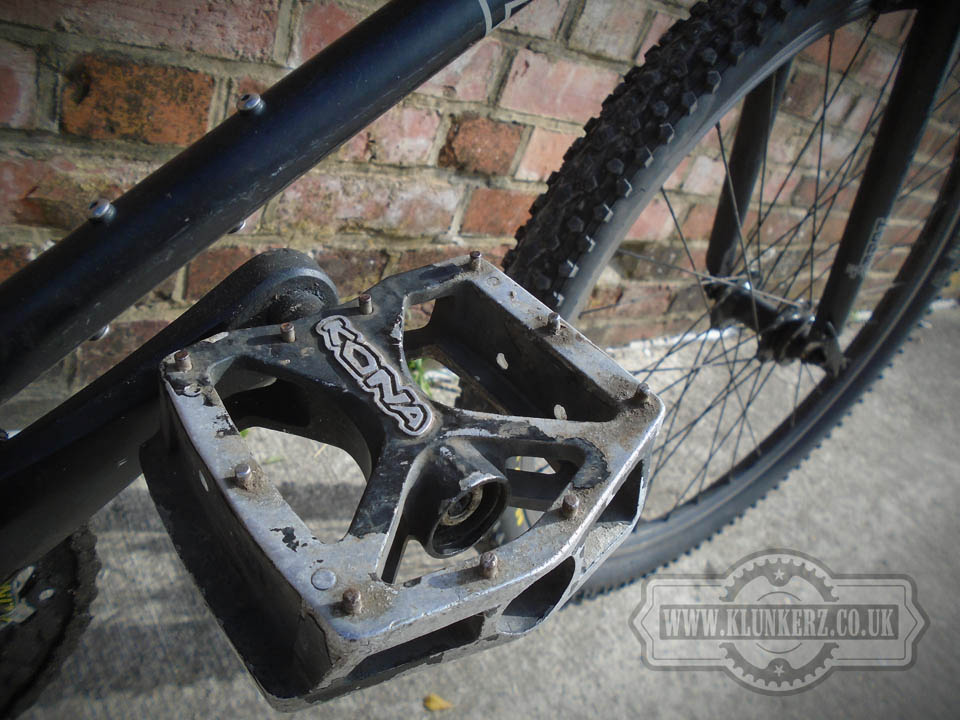 The pedals have no bearings in them, and the crank bearings grind and klunk as if the ball bearings have been removed and replaced with gravel. 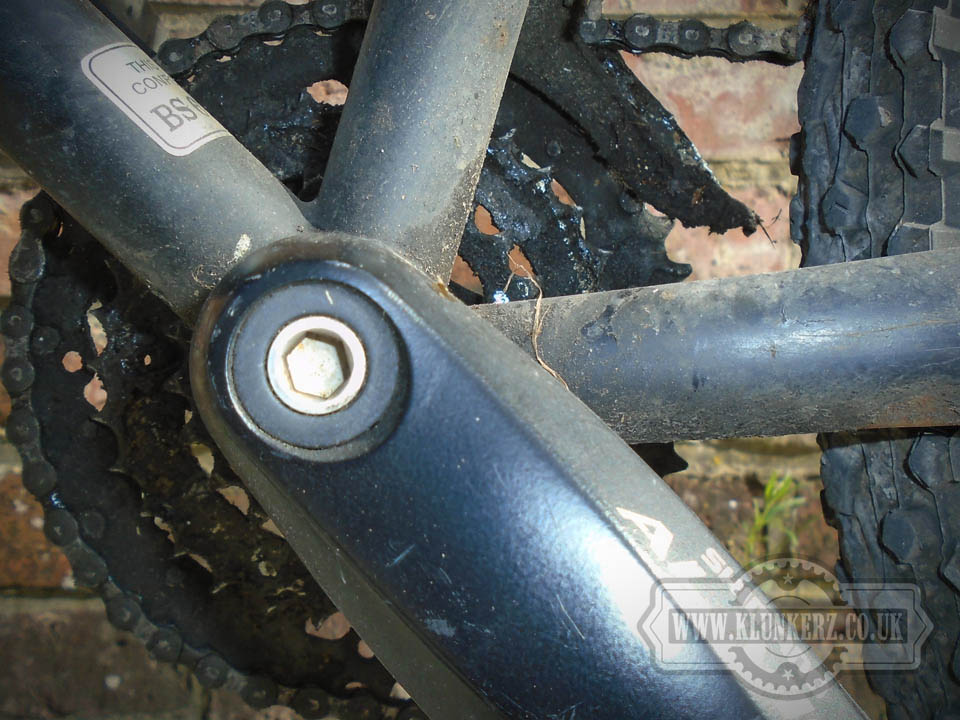 The crank its self is pretty worn too, the teeth no longer have their original profile, and instead come up to a point, which means when you're pedaling along the chain can't grip the crank, and slips off all of the time. I don't think I've ever seen a crank so worn before. Infact, I don't think I've ever seen a bike as worn out as this before. Nothing at all runs smoothly on this bike, and it isn't through lack of lubrication, because it's all greased up, it's just that it's all worn out!

So what are my plans for it now? 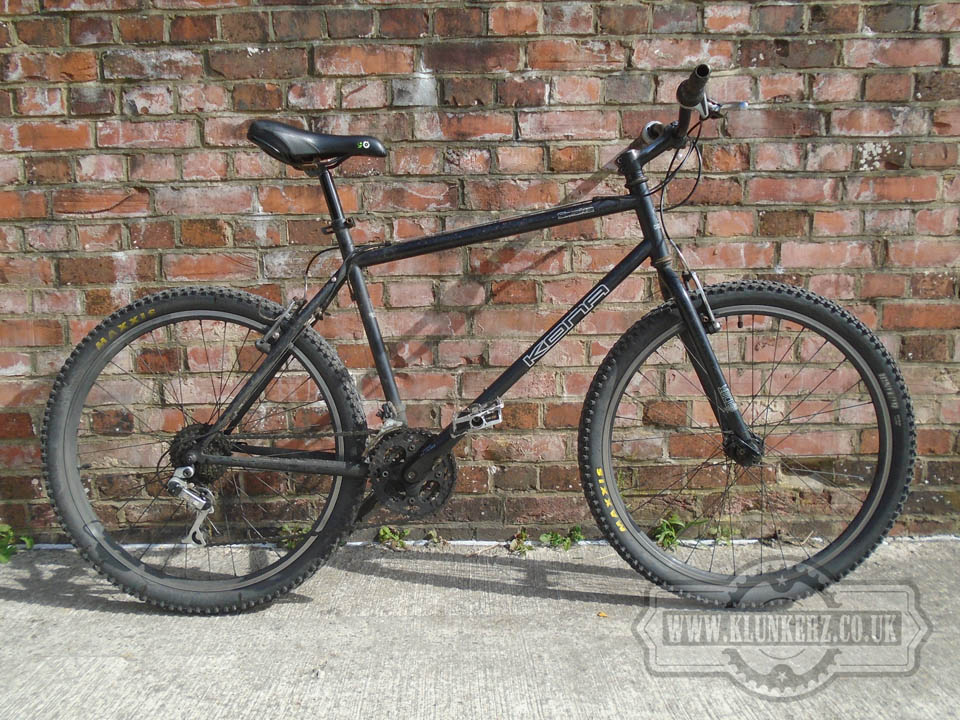 Well, orinally my plans were to fit a new derailleur, and put it up for grabs. But honestly who wants a bike that too worn out to use? I don't really want, or even need another project bike, but to my way of thinking this thing has obviously been loved and cherished in it's life. So much so that it's been ridden all the time, so to me it seems a little unfair to just dump it because it's worn out. So, to that end I'm going to have a good rummage through my parts stash, and pretty much replace everything thats attached to the frame and forks! Sure enough it wont be the Kona that was obviously great to ride when it left the factory all those years ago. But it's hardly that now either!