August 02, 2020
There is something about this bike that I like quite a lot. I can't decide if it's because although its a mountain bike, with the curved crossbar it gives a little bit of a nod to beach cruisers. Or the chunky front forks which seem to give this bike quite a distinctive look. But even as it sits in my shed my eye always seems to be drawn to it. 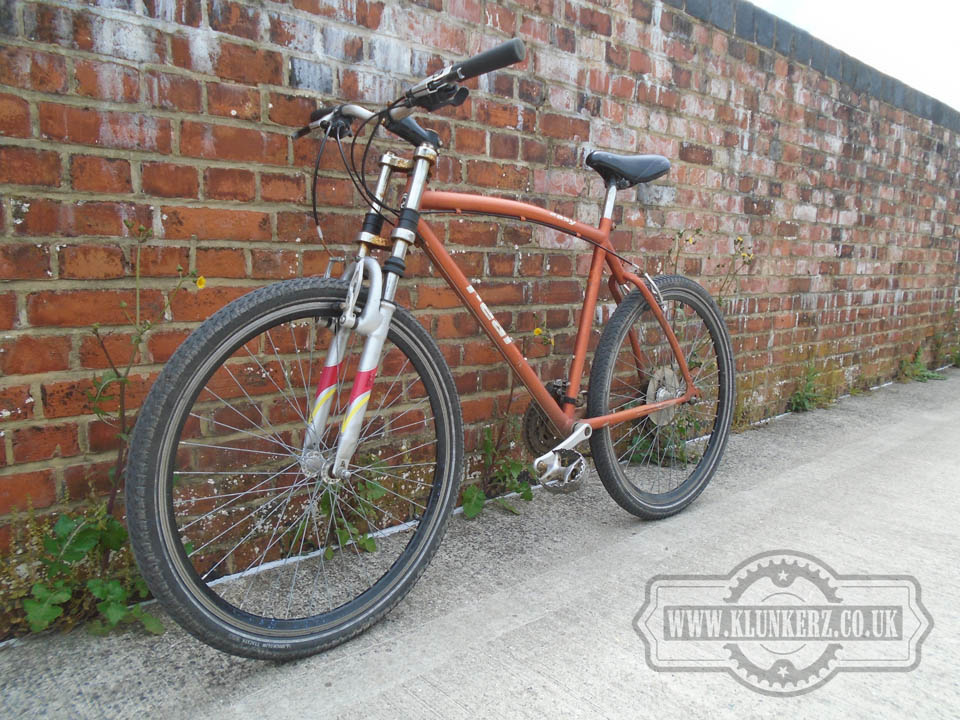 Several times I have toyed with the idea of selling it, just to free up some space, and put a little bit of cash in my back pocket. But at the end of the day, despite it being a cheap bike thrown togehter with cheap parts, I just can't bring myself to part with it. Although, having been out of work for four months now my feeling is that at some point it may have to go, but it will be one of the last ones to leave me I think.
But today, as the sky was less than sunny, and Mrs Clint was already out and about on my Bikini Hurricane beach cruiser I decided that I would head out on the Real Easy. I've been riding along the road a fair bit just lately as the cycleroute has been busy again. I'm not really a fan of riding on the road because firstly, it would appear that despite the campaigns that have been shown from time to time on the tellybox since the seventies, many car drivers don't know how much room to leave a cyclist when they pass them. Many giving me less than a foot of room between the edge of my handlebars, and their car body. Frankly this is nowhere near enough room, but there seems to be no way to educate these morons. The other reason I don't like riding on the road, as if the first one isn't enough is that since I have been riding on the road I've been getting a lot of punctures. The week before last I fixed 18 punctures in 16 bikes, which meant I had to buy five puncture repair kits from Poundland to have enough patches to go around. The worst bit about all of this though is that 12 of those bikes now have punctures again, and as my local Halfords don't seem to have any stock at all for bicycles I can only imagine that they're no longer going to cater for the cyclist. So in the morning I'll be back at Poundland buying another five puncture repair kits. Except not for the Real Easy, the Real Easy has Halfords version of Slime in the tubes, it does the same great job at fixing the punctures while you ride as Slime does, except it's orange in colour, and not green. 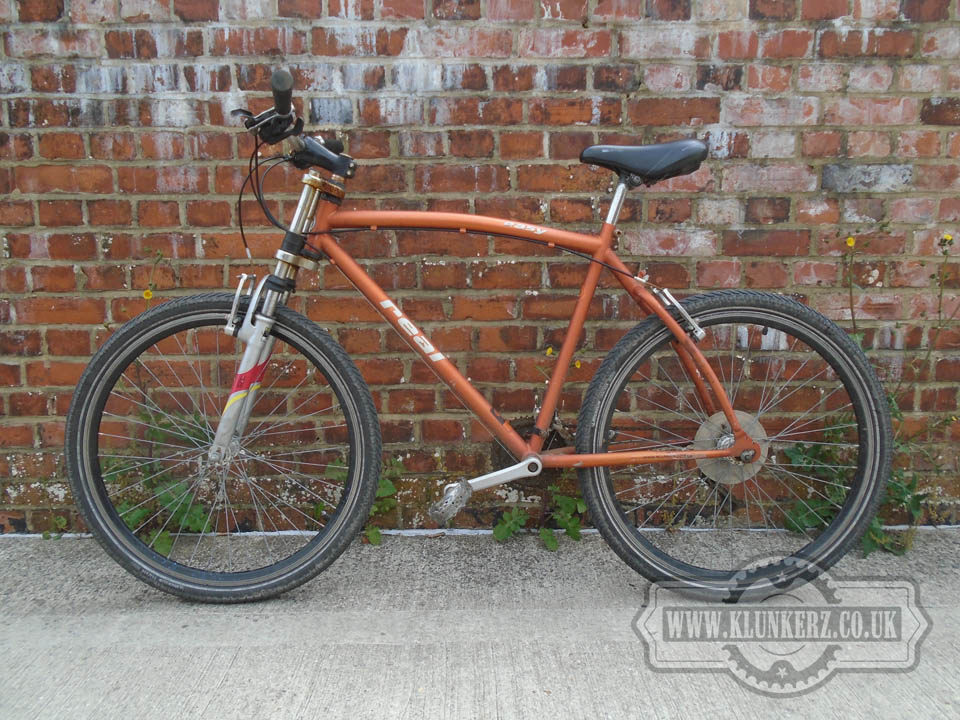 So off on my merry way I went this morning, comfortable in the knowledge that I won't be returning to BelongaClint pushing my bike with a flat tyre today. Sure enough the ride went well, and I managed to return home with both of my tyres still full of air, but better yet... 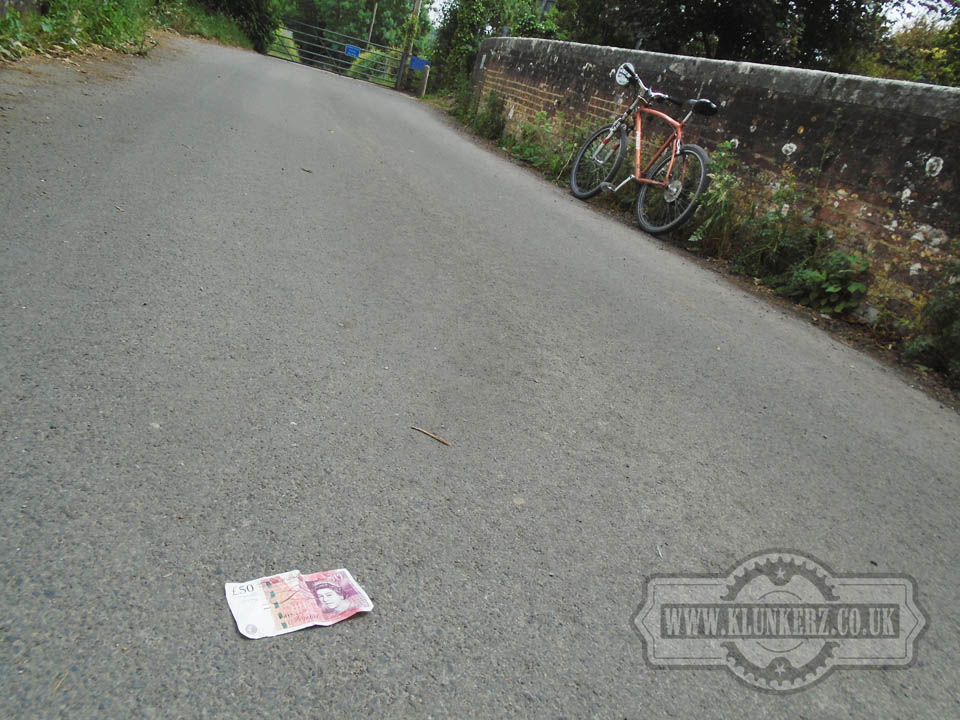 Lately on my rides I have noticed a fair amount of litter, far more than usual. Now there does seem to be more of the normal, crisp packet, newspaper, sweet wrappers, and drinks can/bottle type litter than usual. But added to that is the surgical mask, particle mask, and latex glove type litter. I've no idea why people can't just take their rubbish home with them, but I guess thats just the mindlessness, and selfishness of modern society.
Anyway, on my way home it was quite blustery, and I soon found myself racing with some rubbish that was being blown along in an almost tumbleweed type fashion. I was winning too, passing it fairly easily, and I don't know what made me look, but as I passed some of it I thought to myself, wait a minte, was that money? I carried on riding for a minute or so, but I couldn't shake the thought from my head that some of the rubbish blowing along was money. I headed back to where I thought I had seen the money thinking that even if it was money, it's probably blown far away from where I saw it by the time I got there. Sure enough, the rubbish had blown all over the road, but I scanned the road for a while trying to see if I could see anything that resembled money at all. Sadly there only seemed to be crisp packets and newspaper pages. But then, just as I was about to give up and get back on my bike and go home I saw something, and sure enough it did look like money, because it was money! Better yet, it was a £50 note!! Who throws one of those away? I jumped on it to stop it blowing any further, or worse still, over that wall on down onto the railway tracks, then it would be gone for good. I couldn't believe my luck, but having now found that I must admit I did look a little harder for another ten minutes to see if I could find any more. But none was to be found. I returned home to BelongaClint and informed Mrs Clint of my good fortune, she was very impressed, and better yet she told me that she already had a use for it. Guess who's buying dinner tonight!