It would seem that Mrs Clint has been paying far too much attention to my Bikini Hurricane. When we go out on our bikes it has become apparent that she expects, no, demands to ride my Bikini Hurricane, as in her words I've got more than enough other bikes to ride including another two beach cruisers, and a chopper type thing. Plus, if I was feeling so inclined I could actually build another two beach cruisers as well. I don't like to argue with Mrs Clint, especially when I think she would probably win. I realise that I could actually build her a beach cruiser from one of the two frames I have, but that will involve tracking down parts, and effort. Which as I seem to be spending a fair amount of time building bikes with my two little Monsters, effort on a bike for her worshipfulness seems to be a little more than I'm prepared to do at the moment. So, the search is on to buy her a beach cruiser of her own... 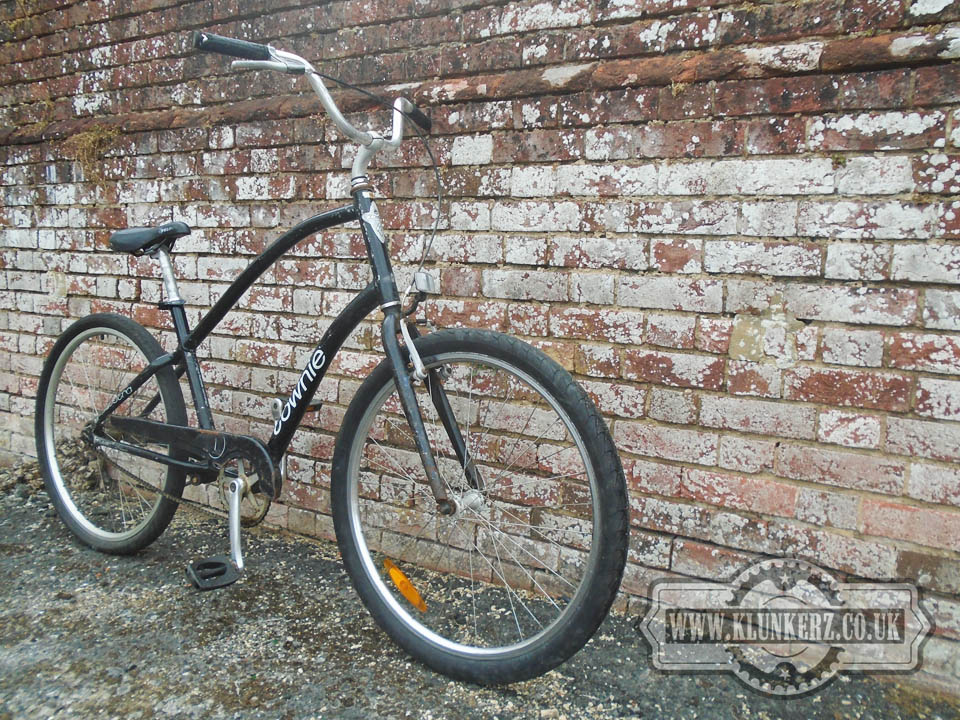 This isn't it apparently! I realise that this is more chopper looking than beach cruiser, but as it was single speed, and coaster braked I figured that it would at the very least give her worshipfulness the experience. Sadly she took one look at it and just said, NO, but you have it and I'll keep the white one! Well that ain't happenin'!

To be fair, when I bought this thing I was pretty sure that Mrs Clint wasn't going to care for it, but it was for sale close by, and, although a little bit more than I really wanted to pay it was still a good price. Besides, the fella who was selling it was going to use all the money he got for it to give to a charity that he raises money for, so I dug a bit deeper into my thin wallet, and hopefully helped him out a bit. 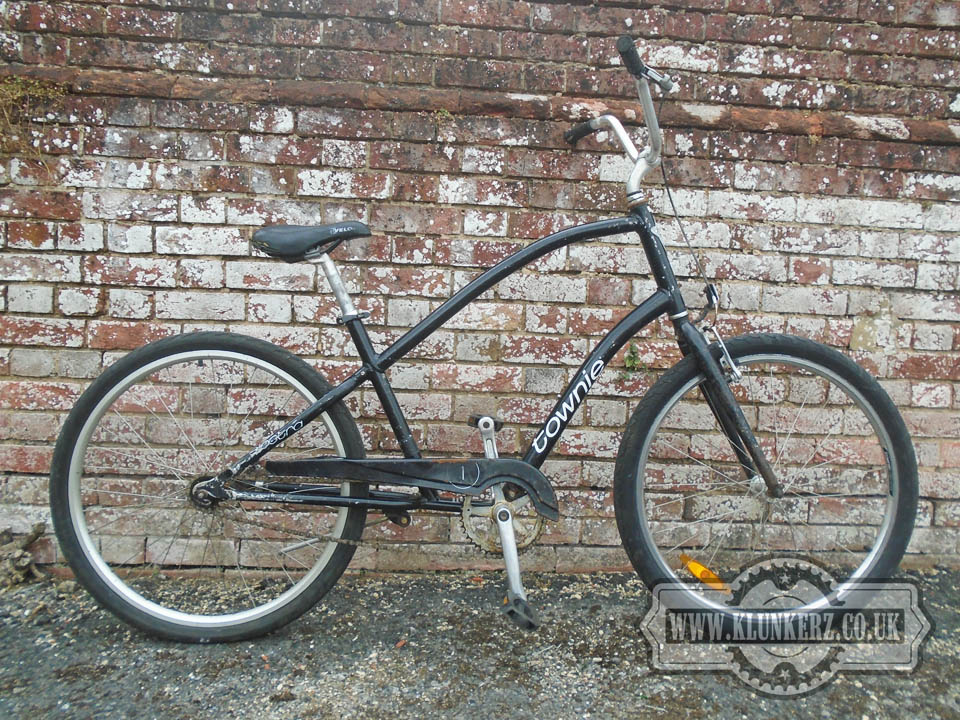 So with the Electra Townie already out of the question for Mrs Clints new ride I figured that I'd take it out for a spin, and probably add it to my ever growing collection.

I pedaled on, all the while wondering if I would get my money back on it if I put it back on fleabay? But also, creaping into the back of my mind I was wondering more and more if a good bike could be had here with a little tweaking! The trouble was the further I rode, the louder the voice telling me to sell it again was shouting. The main problem I think was the riding position, all of my weight, of which there is plenty felt like it was resting on my coccyx, and it felt like it was rubbing me raw from the inside out. I started to think that instead of completing my complete route I would just turn around, and head for home, but then I got some unwelcome relief! 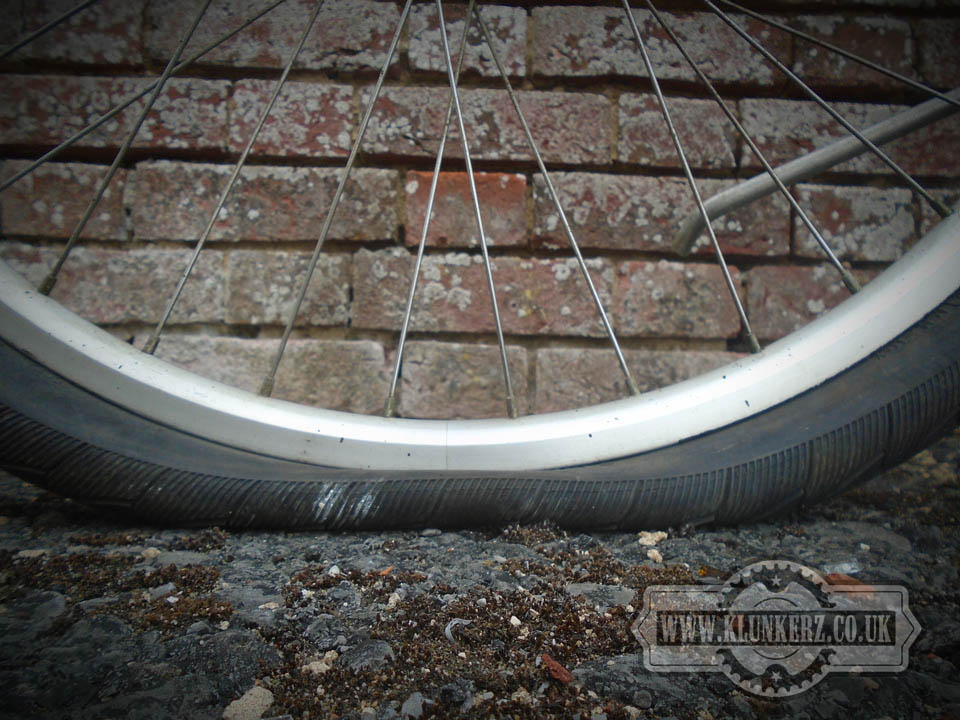 Another damn puncture! I don't know what it is about the roads around Winchester lately, but almost every time I head out I get a puncture. A couple of weeks back I found myself fixing 18 punctures on 16 bikes. Worse still, since fixing them 12 of those bikes have punctures again which I haven't fixed because I'm waiting for more repair patches to arrive!

Anyway, I was pretty ticked off by my latest puncture, because now I'd need to fix that one before putting the bike back on fleabay. I started the walk back to BelongaClint, going via Poundland to pick up yet another puncture repair kit. I wish they just sold the patches because I've got more than enough glue, tyre levers, and cheap low quality bike tools now!

I arrived home pushing the Townie feeling a little better, mainly because I'd not been riding it. So I set about mending the puncture ready to sell it again. The thing was, while I was mending it I was sat pretty close to my bike parts stash, and the more I thought about it, the more I thought I needed to atleast try a few things. 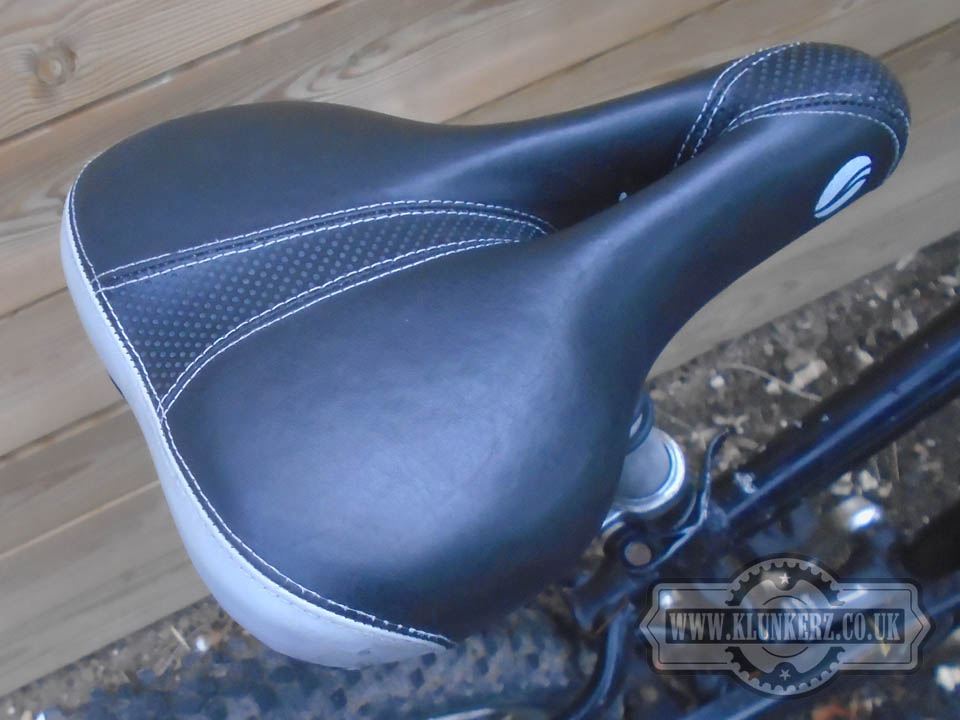 So, I dug out what I thought might be a more comfortable saddle, and put that on. 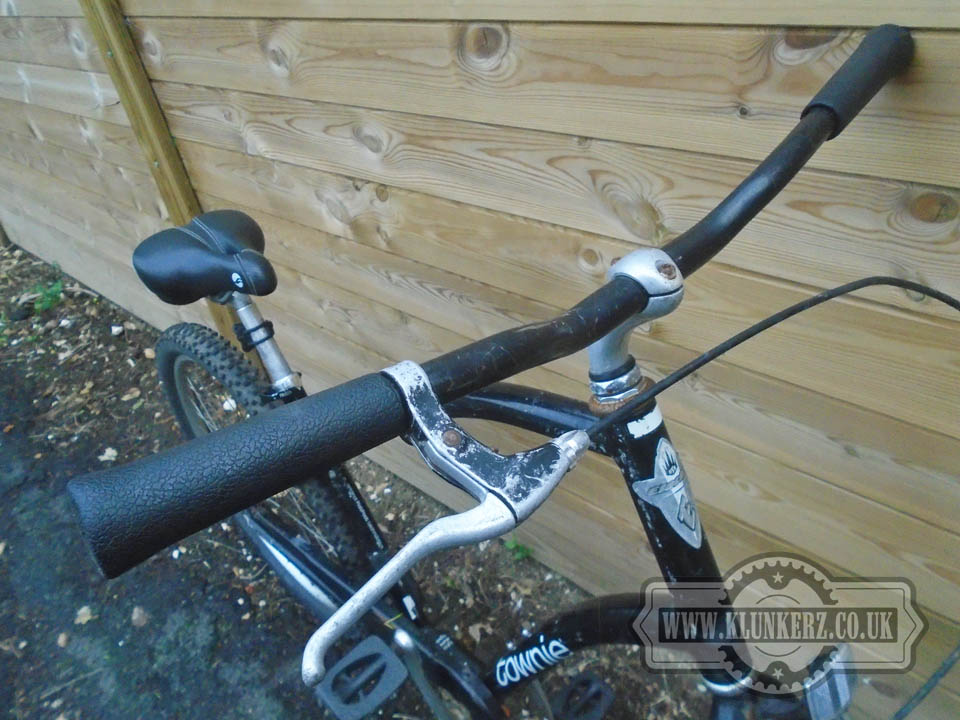 Then, because I thought the mini ape hangers were as much a part of the problem as anything, I found a set of flatter mountain bike handlebars, and a pair of grips that weren't sticky because the rubber was deteriorating and put them on too. 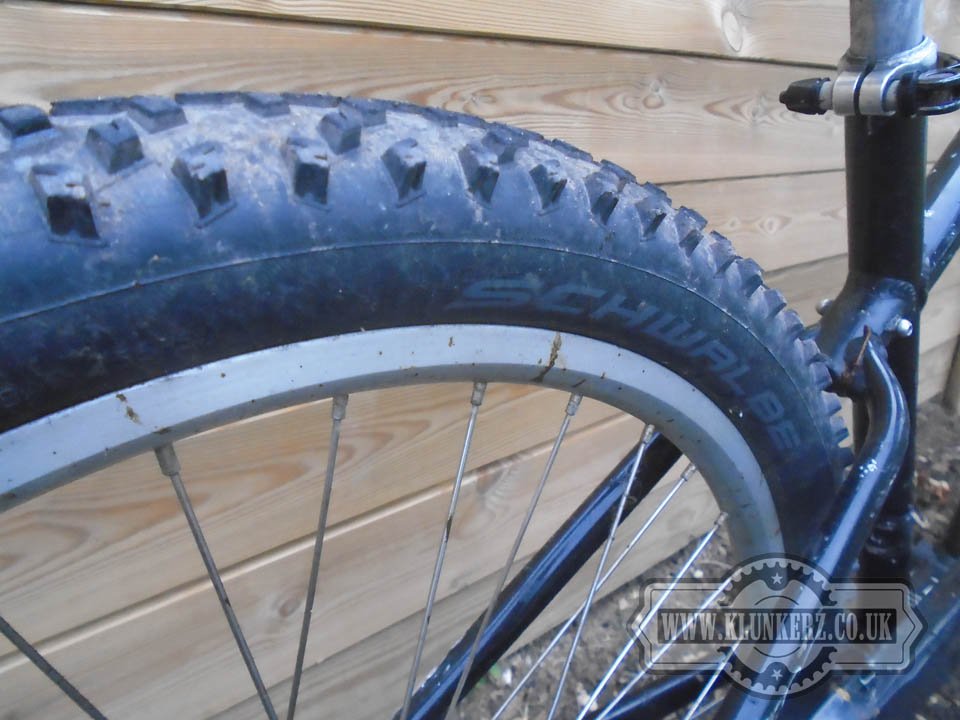 The next thing I knew was that despite there being nothing wrong with the rear tyre now that I'd fixed the puncture, I changed it anyway to something that was a little bit knobbly. 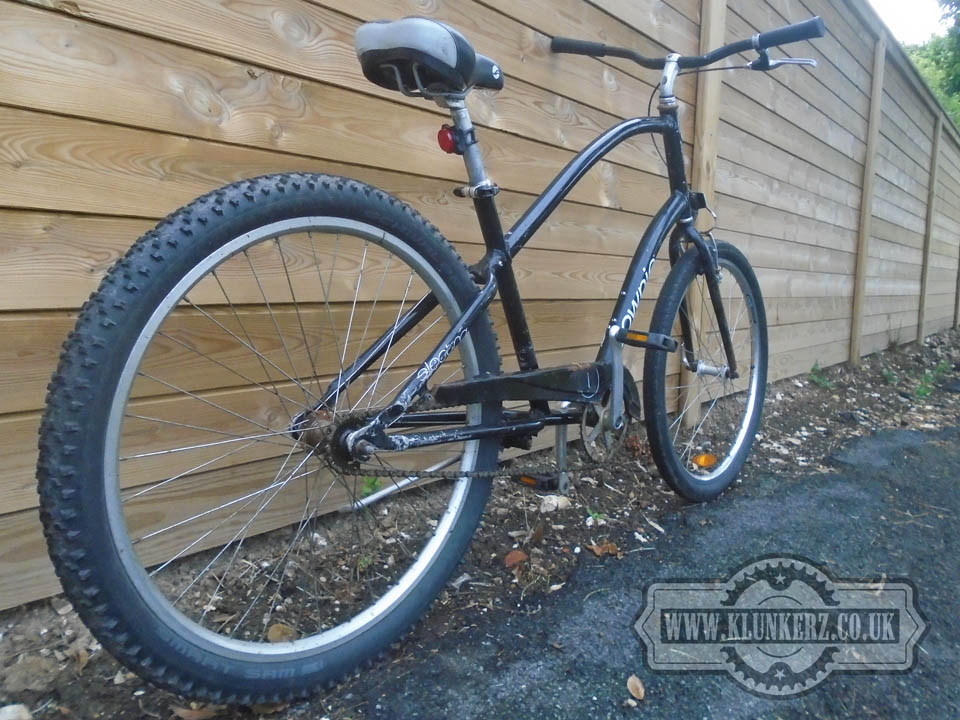 Then it was complete. I couldn't believe that it would be much better, if any better at all, but I thought I'd leave it for the day to give my bum a chance to recover. Then have another go on it the following day before putting it all back to stock and chucking it back up for sale.

The following day arrived, and I thought the first thing I'd do is punish myself by taking the Townie for a ride. I headed out, fully expecting to ride it for ten minutes or so, then come home and put it on the bay. But I didn't, I did my normal test cycle route which stays quite close to home, but is still a fifteen minute ride, and it was pretty good. Actually, it was far far better than I ever expected. The posture is a little wierd with my feet pedalling away infront of me rather than directly beneath me, but with the change of bars, and the different saddle I was actually pretty comfortable. With my little test route completed I pressed on, and decided to take on my normal cycle route. Forty minutes later with that almost complete I was still feeling pretty good and even comfortable, and so instead of heading back towards BelongaClint I headed away from it. I rode, and rode, and rode, and before long I had been out cycling on this thing for over two and a half hours. Despite still feeling OK, and still feeling fairly comfortable I headed for home.

When I got home I've got to admit that I was thankful that I got that puncture, because without that I would never have changed anything on this bike, and I would've sold it without ever realising just how good it could be to ride. So now atleast when Mrs Clint has nicked my Bikini Hurricane I can take this thing out for a bit of a spin. I can't say that I'll keep it long term as I think that if push came to shove and I had to sell it or a beach cruiser, then it would be the beach cruiser that I'd keep. But, I thnk that while I've got the space to store it, and I'm not completely out of folding stuff in my wallet this little beauty is going nowhere. Infact I am so happy with it I planned to go out on it today, but guess what... It's got another damn puncture!