You may well be asking yourself, what the heck is this junk? Don't worry, you're not alone, I've been thinking that ever since I got this thing today! You may be aware that I'm not the biggest fan of bikes with suspension, as a rule I like both my forks and my frame to be ridged. I'm no down hill superstar, or off road rider, and so for me suspension is just not needed on my bike. The thing is, that I believe that for most people out there suspension is really not needed on their bikes either, it's just adding weight for the sake of adding weight in my opinion.

However, about a year ago I thought that for a change, at some point I should grab myself a full suspension bike, and see if they're as bad as I think. 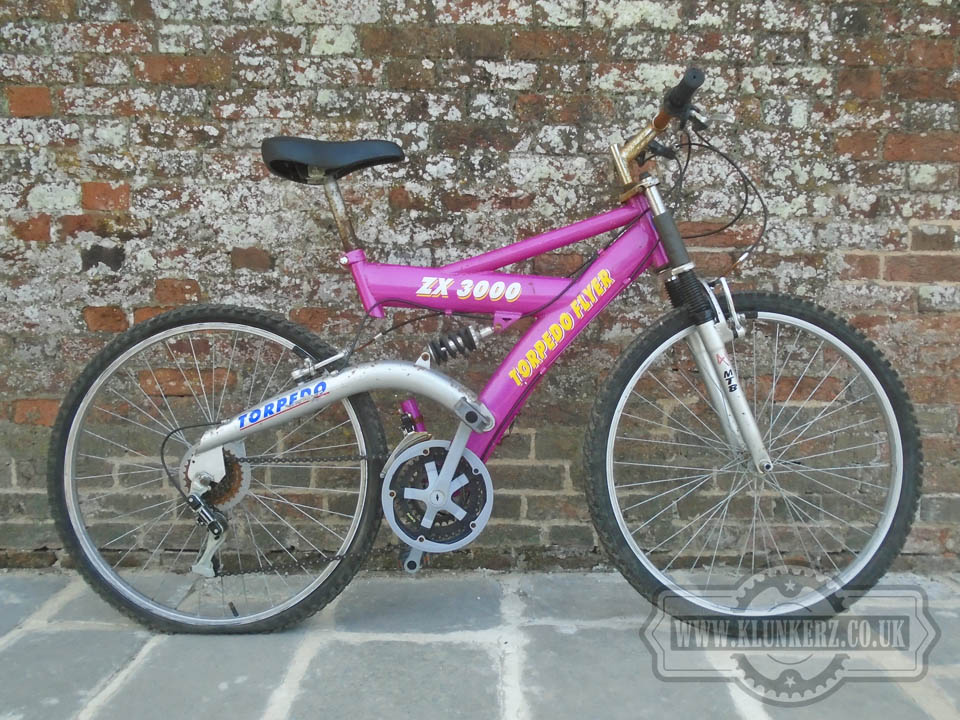 This morning, as I wandered home from dropping my littlest Monster off at school I passed a skip, and in this skip were several bikes, and some frames. Most of the bikes looked like they would be best used as spares, but near the top was this Torpedo Flyer full suspension mountain bike, better yet, it was almost complete, just missing the seat post and saddle. So I asked the guy loading the skip if I could have some of the bikes, and he said I could have them all, as long as I took them now. I dragged them all out of the skip, walked home with the Torpedo Flyer, and came back with my trusty Nissan Navara for the rest.

When I got home I took a saddle and seatpost from one of the bike frames and fitted it to the Torpedo Flyer, and then started to asses what I had got. The bike its self is in pretty good shape, infact I would say that it has barely been ridden, apart from that, the back wheel had a small buckle, though not enough to stop the wheel roatating, and a flat tyre. I pumped up the tyre, which five minutes later was flat once again! Of course, why wouldn't it already have a puncture? No matter, due to my pucture repair marathon a few weeks back I checked the tyre for anything poking into it, and once I was satisfied there was nothing in it, I fitted the new tube, and put it all back together.

Then, once some new wind had been fitted in the flat tyre I was ready for my ride. Man alive this thing is heavy, honestly I've had lighter motorbikes! But never mind, I thought I'd just keep going, but then the first problem showed up pretty quickly. 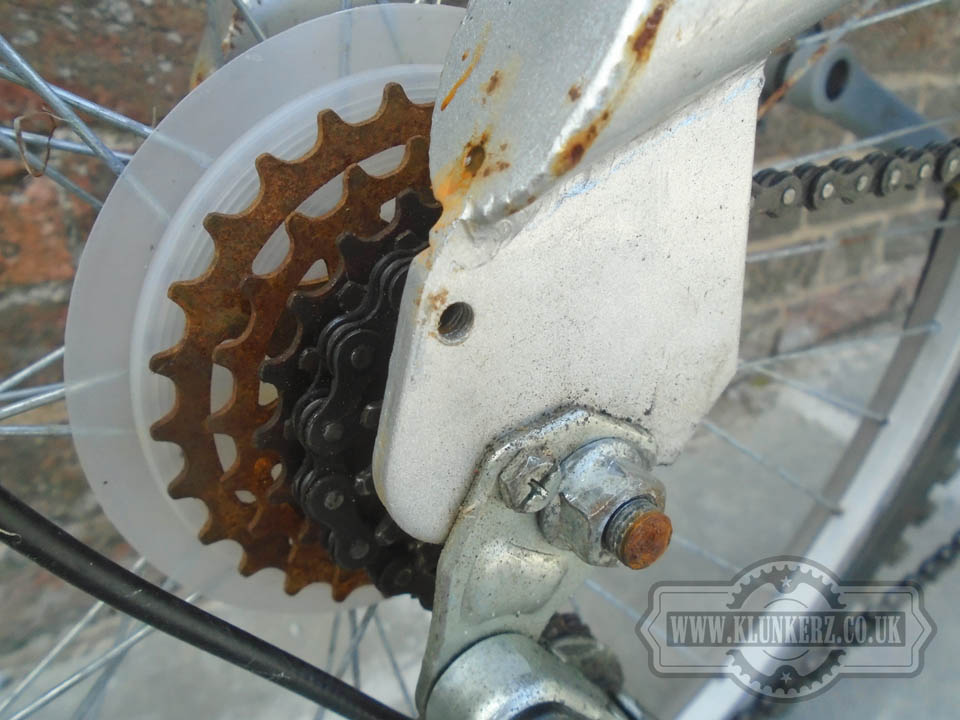 On the flat it was great awful really, but at best OK, but when I came to an uphill stretch the block started to turn. I figured that this was probably OK, it was only doing it because it had probably only been ridden by someone lighter than me, if it had been ridden at all. So I carried on pedalling thinking that I was just tightening the block onto the wheel with my weight. But the further I pedalled the more it slipped until I had to get off and walk. I thought that if I walked up the rest of the hill I could atleast ride it on the down hill and flat section hopefully as I wouldn't be putting as much weight on the pedals.

At the top of the hill I mounted up again, and coasted down the otherside and eventually onto a flat piece of road. I gently pedalled, and as I wasn't putting too much of my weight on the pedals I was managing to propel myself along a bit. This is where the second problem raised its head... 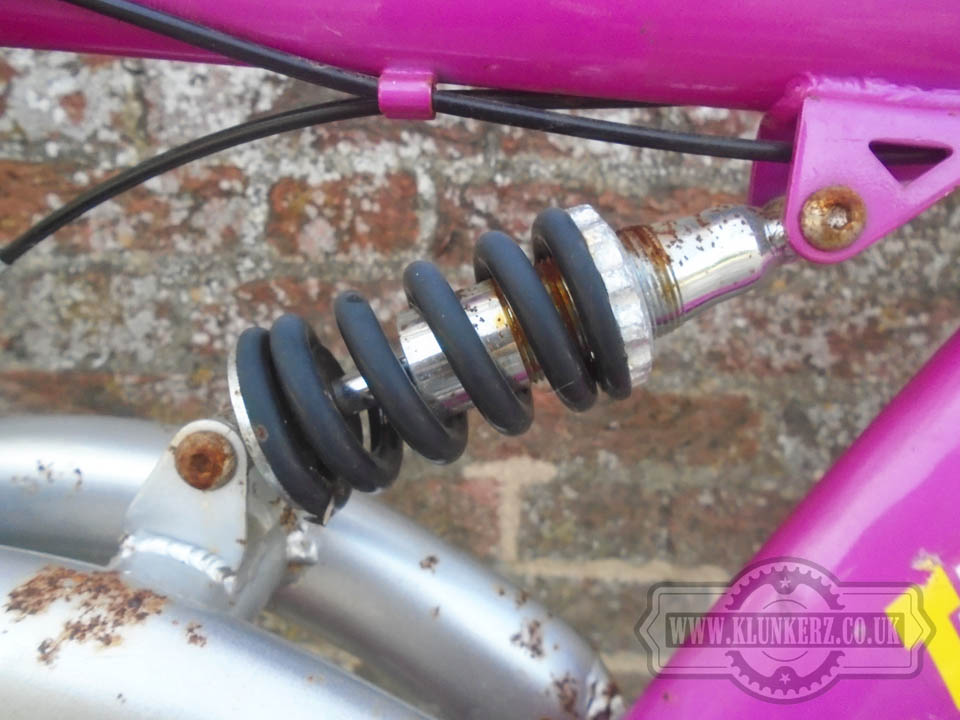 It's bouncy! Any bump in the road isn't soaked up by the suspension, but instead it makes the bike bounce. I felt like I was riding along in a giant bouncy castle! Not great, but I figured that if I tightend the nut on the rear suspension the spring would be more compressed so it would become stiffer, and possibly rectify the bouncy castle situation. 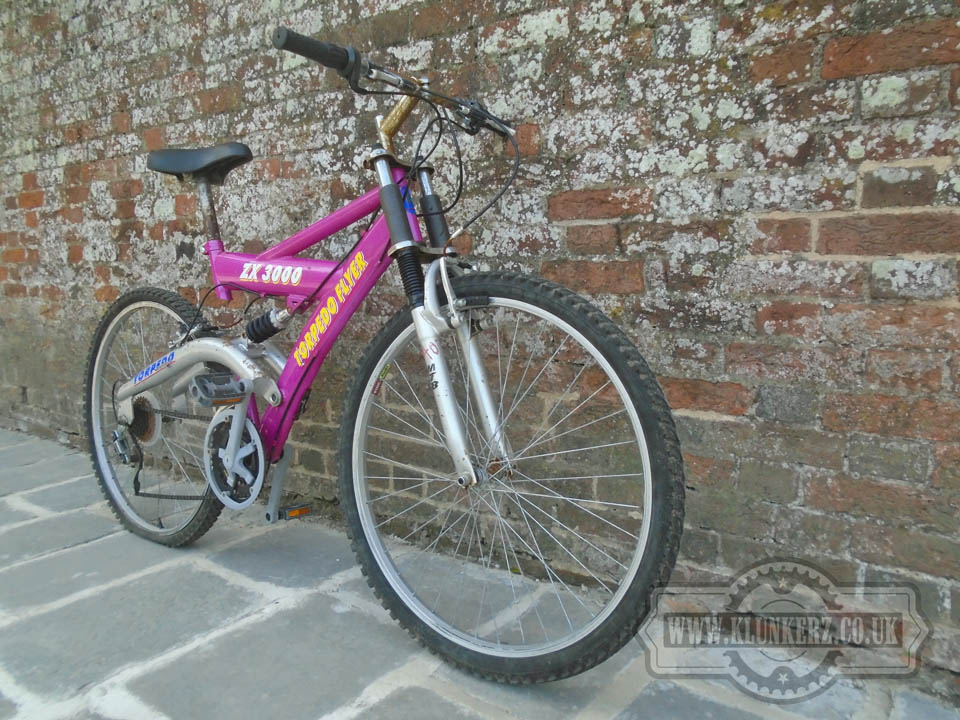 Up front despite the suspesnion forks I had no such worries. The reason for this is that they seem to be stuck solid. I've not looked into it yet, but I guess they're rusted together, and so I have dowsed them in WD-40, and I am hoping for the best.

Then, just half a mile into my test ride, another annoying little problem occurred. I got a flamin puncture! As I'm sure you can imagine I was furious, so furious that I nearly tossed the damn thing into another skip that I passed on the way back to BelongaClint, but I didn't. 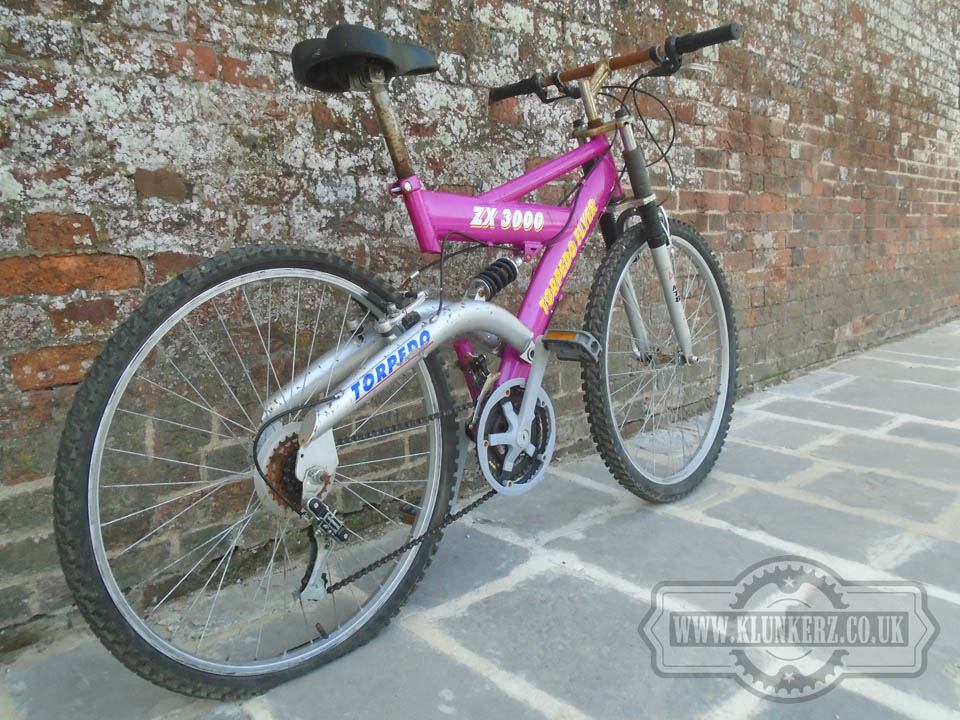 What I have decided to do instead of flinging it back into a skip is to maybe fettle it a bit, see if it can be made better, or even good in any way. I've had full suspension bikes before when I've picked them up as part of a joblot of bikes, but I never ride them, I either break them up for spares, or just sell them on. The last one I had that I told you about was the MuddyFox Recoil... Possibly. and that was waaay back on September 11, 2017... Just over three years ago now... Phew, time flies when you're having fun! Anyway, I rode that junk just once, before selling it on, and that was more than enough for me! But as for this one, well, despite every fibre in my body telling me to get rid of it and move on, like I do with every full suspension bike I get. I have decided that this time I'll stick with it, ride it, fettle it, ride it some more, and see if I can make it into something I actually want to ride, rather than something I'd rather put back into the next skip I pass. So for the next month I will be taking this thing for a regular ride, and try to find out just how good (or bad) it really is. But first of all, let's fix that damn puncture!