Despite the little voices in my head telling me to get rid of the Torpedo Flyer, I still have it. I fixed the puncture, and looked at the block and decided that all was OK there, and it probably was just tightening its self up with my weight, and so, once again headed out to try it out. 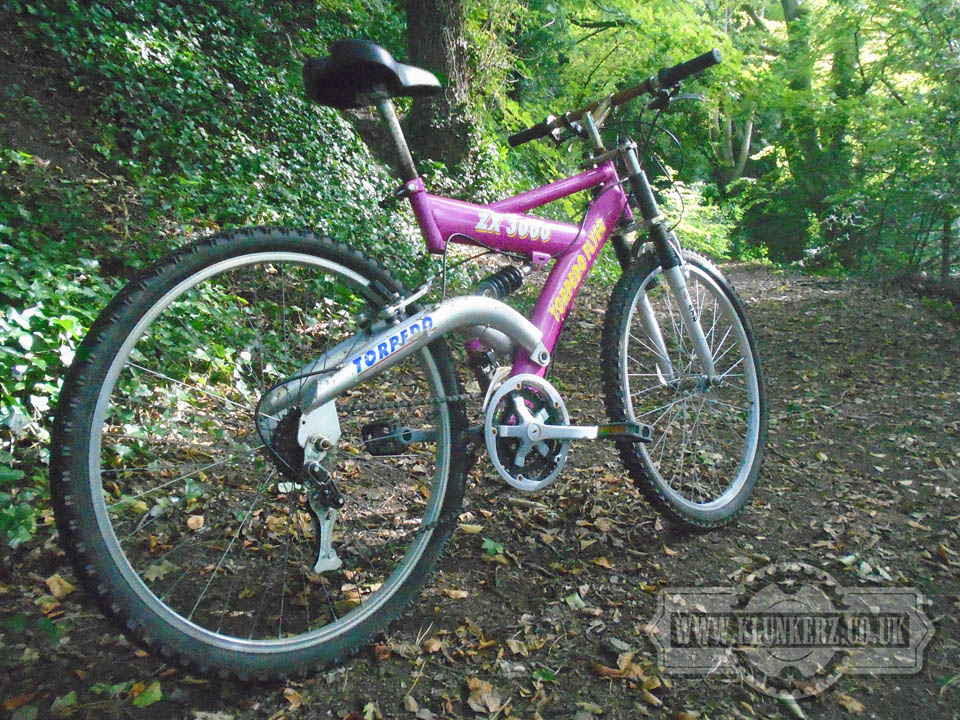 As it turns out, that wasn't what was happening at all, after about ten minutes of riding I was walking back to BelongaClint as the block was spinning pretty much freely on the wheel as I tried to pedal along. The problem would appear to be that I have stripped the thread on the wheel somehow, and so that is obviously knackered, and fit for nothing more than the bin. Once back home, and after digging through my stash looking for a wheel I soon found that I had nothing suitable that I could just pop straight on, this one having a six speed block, and mine all seem to be either five, or seven speeds. I suppose that really I could've just swapped one over, but that seemed to be more effort than this thing is worth, and so a wheel was borrowed from a different bike, and flung onto the Torpedo Flyer. I figured it wouldn't matter too much as this thing is a very temporary addition to the collection. 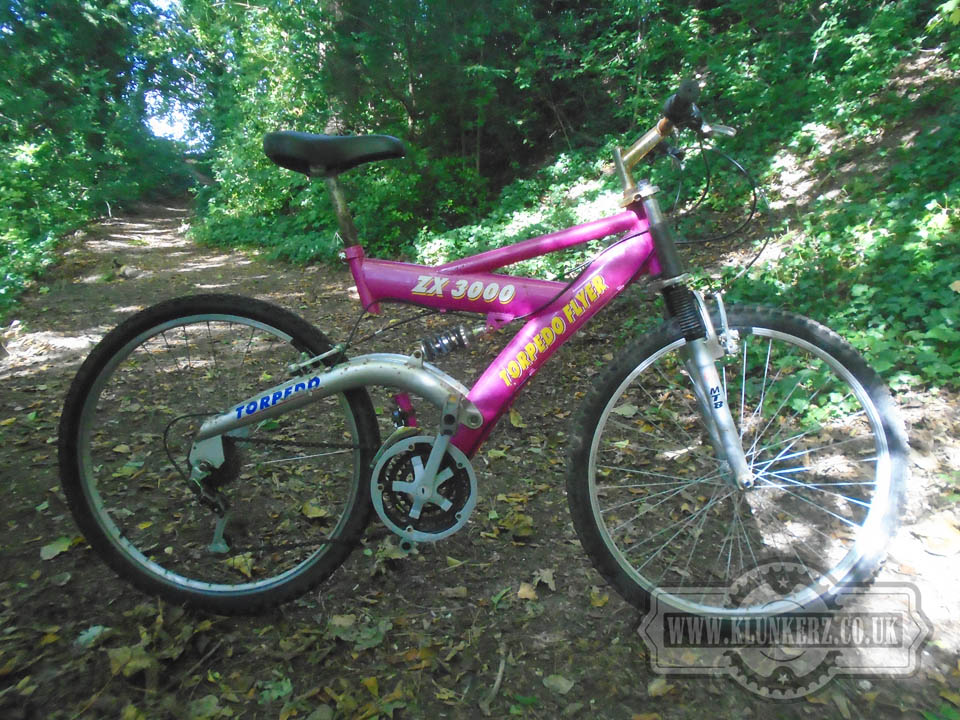 Off I went once more for a bit of a ride in the woods. I have tightend the nut on the rear spring, and compressed it some more, but to be honest there is very little difference to be felt from how it perfoms. I guess it is marginally better, so I think I may well tighten it a little more before my next outing on the damn thing, but my feeling is that I'm always going to feel like I'm riding the horse in the Buckeroo game! As for the front suspension, I have been giving it a liberal coating of WD-40 this week, and the good news is, as I bumped down some steps it is now free. I'm unsure if this is a good thing or not. But to be fair to it, it hasn't appeared to add to the bouncyness of the bike, although having said that if I lean over the handlebars as I'm riding along and put my weight over the forks they compress to their full extent. So steep uphills, that are hard enough already, also come with the (possibly) added benefit of the front suspension forks acting like ridged forks. I'm guessing that a 51 year old 18 stone man is not the demographic that the manufacturer had in mind when they designed this bike, despite the frame being big enough for me to ride fairly comfortably (bouncyness aside) It's probably aimed more at a light little teenager, although they'd need some proper leg muscles to propel themselves along.

Anyhoo, despite all this little niggles another propblem reared it's ugly head when I collected my youngest Monster from school on Friday. As I stood there amoungst the other parents outside the school fence one of the teachers came over and asked me if I thought that my bike was an appropriate bike to be stood outside a school on? I couldn't really see the problem, so I said why, because of the pink? No she said, because of the name. I looked down, and looked back at her and said Torpedo Flyer? Am I missing something here? She laughed and said, you might want to look at it from this side. I looked at the other side... 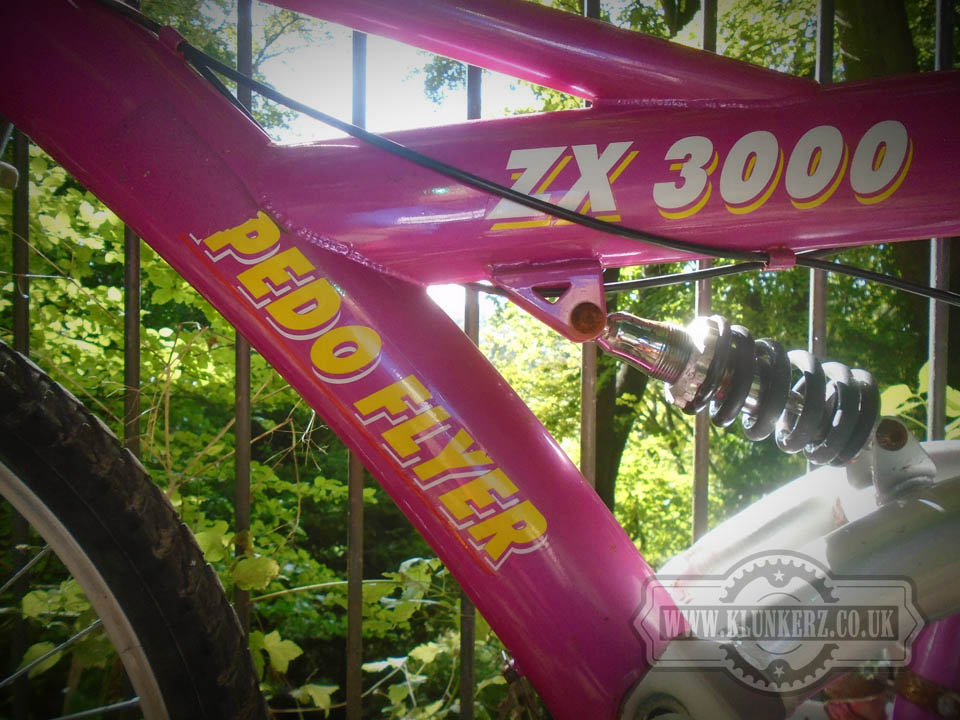 Oh dear! I could see exactly what she was talking about, worse than that it looks like the sticker has been half peeled off for a good whle, and no doubt it must've been like that when I collected it! Worse still, I've been out and about on this thing several times in the last ten days with Pedo Flyer down one side of the bike. How I didn't notice that I'll never know. Anyway, once back home a sticker-ectomy occured, and now I have a plain pink and silver bike, or atleast on once side I do. 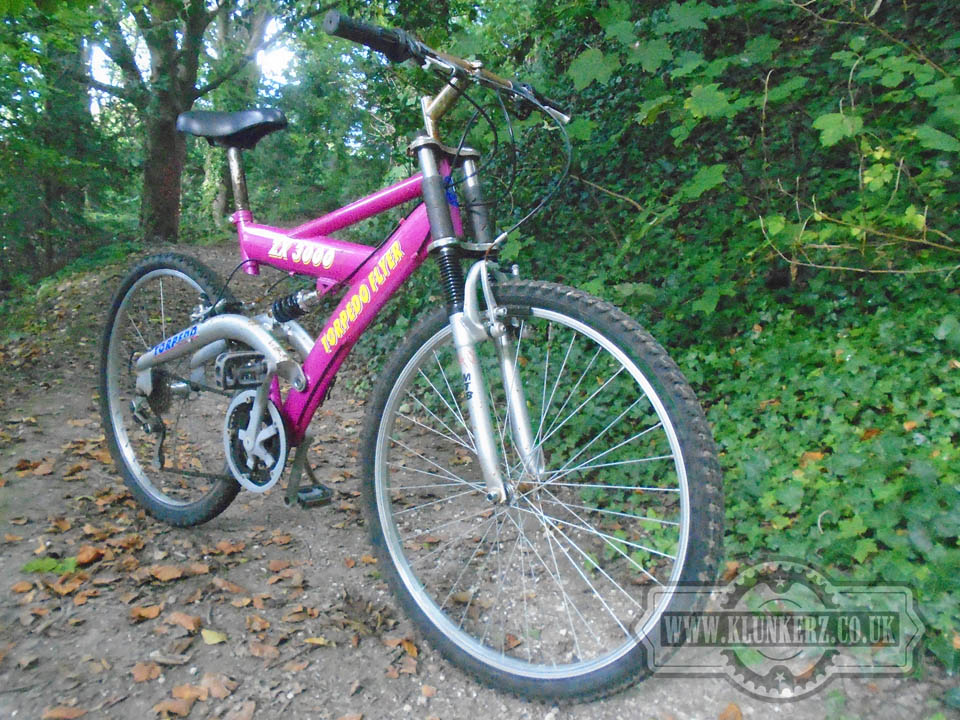 So this brings me up to date on this junk, so where do I go from here? Well, I'm thinking that what I need to do now is probably de-sticker the whole thing for a start. Then maybe as the front forks are now working to an extent, change the flatbars to something a little more sit up and beg in order that I'm putting less weight over the forks as I ride along. Hopefully this will give the front forks a little more travel because they won't be half compressed by my weight before we even ride anywhere. Tighten, and compress that rear spring a little more in the hope that it will be less bouncy. Lastly change the bearings in the bottom brakcet as they sound like I've got it filled with gravel rather than nice round ball bearings.

Then and only then it might become a nice bike to ride... It won't obviously but I like to try and look on the bright side.