So another week of faffing with the Torpedo Flyer, has it improved it at all? Well, maybe, changing out the bearings in the bottom bracket has actually improved things a little. The pedals now rotate quite nicely, and I don't feel like I'm trying to crush gravel as I'm riding along. 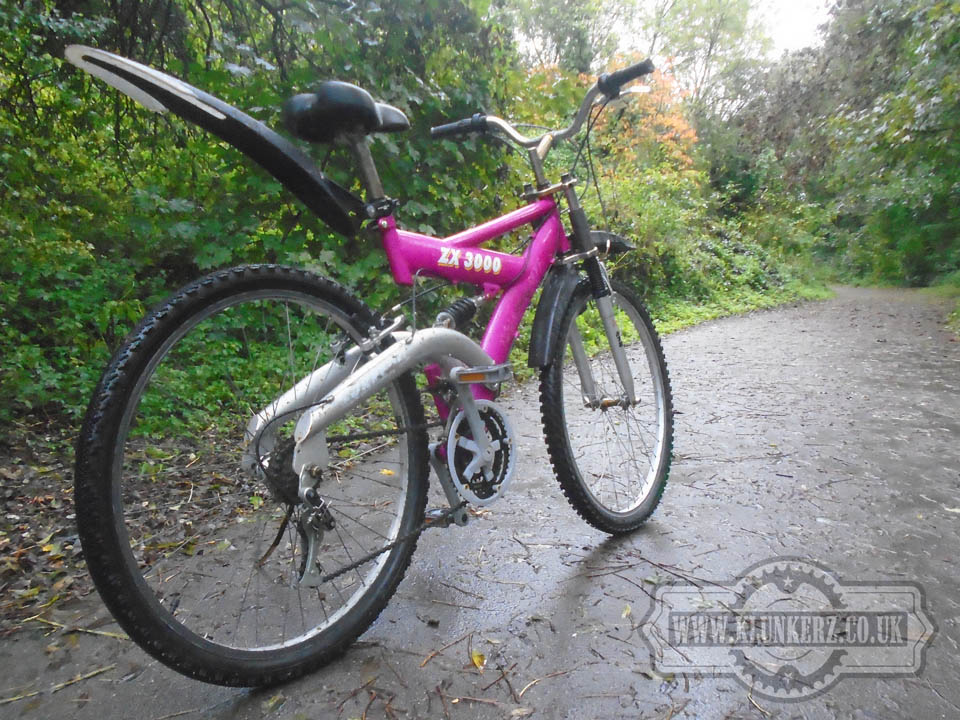 I have also tightened up the spring on the rear suspension a little bit more, this has made it much less bouncy, and although I no longer feel like I'm trying to ride a bucking bronco, it's still not exactly what I'd call ideal. 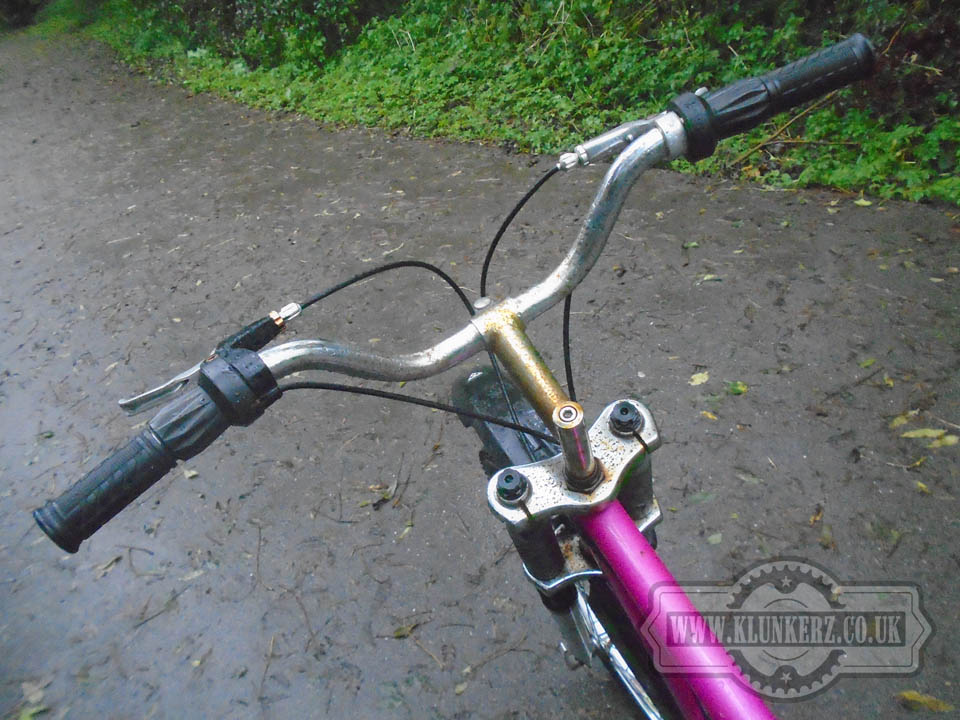 Changing the handlebars is probably what has made the most difference though. I have fitted a set of bars with about a four or five inch rise on them. What this means is that I am sitting more upright on the bike, and therefore I guess I'm putting less weight over the front of the bike. So with less of my bulk pushing down on the front forks they are now not as compressed as they were, and I think they are only compressed about 20% when I sit on it, rather than the (atleast) 50% they were compressed when my lardy frame was riding this last week. Admittedly this is still not ideal, but frankly unless I fit a set of ape hangers, and have them angled towards the back of the bike this will be the best I can do. 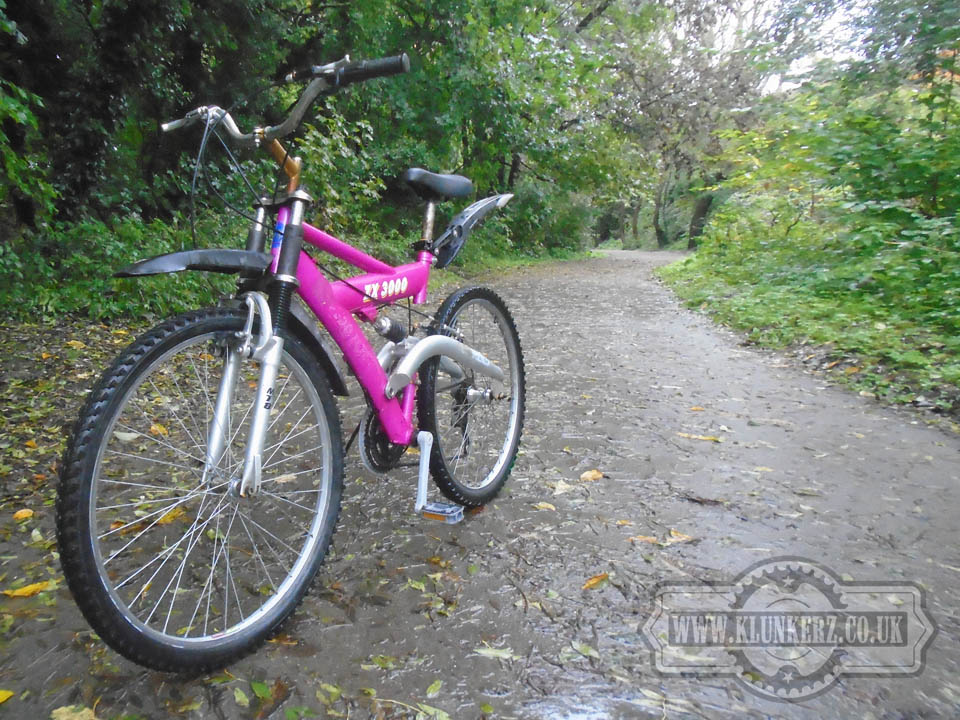 Ofcourse, this does mean that with less of my weight over the front this can only mean that more of my weight is over the back, and I think this is why its still a little bouncy when I ride. The good news, if you look hard enough to find it is that there is still about 10mm of adjustment to be had on the rear spring, and so a little more tightening is probably in order. The other small change I made this week was to add mudguards. I realise that this probably hasn't made much of a difference to the way the bike rides. But this week it's kinda rained alot, and there's only so much fun to be had riding in the rain with the water and mud combination spraying in my face and up my bum!  But anyway, after my latest round of fettling you may well be wondering what it's like to ride? Well todays ride wasn't the greatest, for a start it was widdling it down, so I wasn't exactly in the best frame of mind when I set out. But once out, and reaccustomed to riding the buck-a-roo again I started to get into it a little. Frankly I think the rain was actually a benefit, as for the first time in a really long time my regular cycle route wasn't far too poepley, infact I guess I probably only passed 10 people in total, it was pretty good. Better than that, despite the mudguards being a little bit on the ugly side they did actually keep most of the water from the road from spraying all over me.

I'm not sure if I've somehow brainwashed myself into thinking that this is actually good to ride, but I think I even nearly enjoyed it today. I've got to say that in comparrison to the Falcon Long Beach the Toprpedo Flyer probably is easier to ride, but this isn't to say that I prefer it. My feeling is that in the right enviroment the Long Beach would be great, and I still doubt that if I took the Torpedo Flyer, and tried to ride it down the side of some mountain like some sort of a downhill king this thing would be less than acceptable. Infact I reckon trying to ride it down some rough terrain downhill fast this would be down right dreadful, and most likely break.

So where am I going from here? Well I'm not really sure to be honest. Everything seems to be functioning as well as its going to function, the only fettling I can really do from here would be to further tighten the rear spring, which is what I intend to do, but outside that I think it may well be as good as it's going to be. I remember thinking when I first rode this thing was that I'd never be able to ride this thing far. So far I have been doing my normal little route that I tend to do when I'm testing a bike, but each time I've ridden it a little further. So although I doubt that I'd ever want to spend the whole day riding this thing, I think it may well be getting to the point where I could spend an hour or two on it, but that being said why would I want to? It's not like I've got nothing better to ride, and even against bikes like my Magna Fugitive the Torpedo Flyer would still be a poor choice. Still, I guess I'll try and fettle it a little further and try to make it as good to ride as it possibly can be over the next two weeks or so. Updates as they occur.