Over the last week or so I have been slowly tinkering away at the Schwinn. When I last spoke about it I was torn between leaving it as it is, with all its lovely patina etc, or tearing it right down, getting the frame blasted and re-painted, and building it back up. In my mind this would be fine if I was planning to fit all new parts to what would now be a new looking frame. My feeling was that if I just put the old parts back on it they would look quite out of place, and pretty second hand. Checking on my fun fund I found it at an all time low, so for me I thought that possibly the patina look is going to be the way forward. 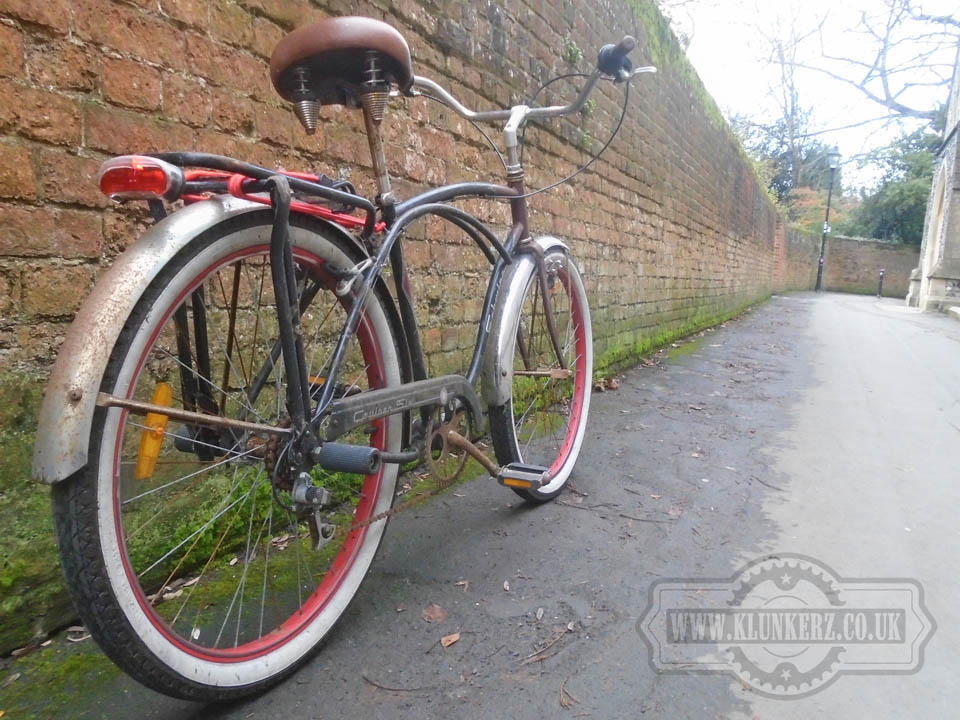 However, the deciding factor was rummaging through my parts stash and coming across this bike rack. 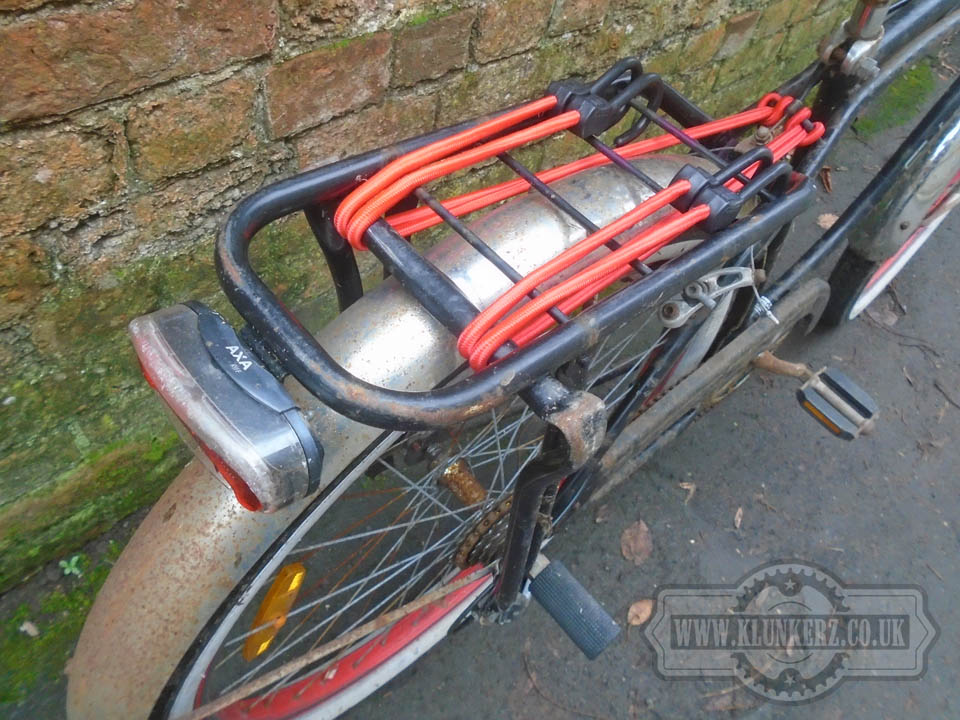 I'm not sure where it came from, or what it came off, but it's a little bit scruffy looking, a little bit old looking, and a little bit broken so I think it suits this bike perfectly. Thankfully the broken bit is confined to the stand that is built into it, the part that holds the stand up while the bike is in use has broken off. Unfortunately this is the same bit that holds the bike up when the stand is in use, therefore the stand does not work very well at all. I thought about removing it completely, but I sort of think that it adds to the look of the thing, and possibly also to it's strength while it's tied up.

In my previous post about this bike I spoke about the stunt pegs on the rear wheel. I couldn't figure out why anyone would put stunt pegs onto a beach cruiser, my feeling was that I was going to take them off, and just replace them with regular old acorn style wheel nuts. But the more I thought about it, the more I wondered if they may well have been used not for stunting, but for carrying a passenger. This was confirmed for me by various other people who had commented on various posts that I had put on various farcebook groups, so thanks guys for the information. Several people went further and commented that with the addition of a rack it might make for a good way to transport one of my two little Monsters home from school. They could put their feet on the pegs, and park their bum on the rack. This sounded like a good idea to me, but I felt that the rack would need to be pretty sturdy, luckily for me, this rack is very sturdy, and so once it was on there and all bolted up I thought that I should try it. I tried it first with my youngest Monster, who despite being the youngest may well be nearly as heavy as the oldest. She was a little bit apprehensive at first, but pretty soon we were blezzing along the street at a fair old rate. When we reached BelongaClint she jumped off and declared that it was pretty good, and I could collect her from school on it the following day. Then came the oldest Monster, she is far more cautious than my youngest one, and was quite nervous about getting on, but eventually she got on, and we rode off down the street. Upon returning to BelongaClint, she also thought it was a pretty good ride, but I felt that she is in no hurry to try it again. 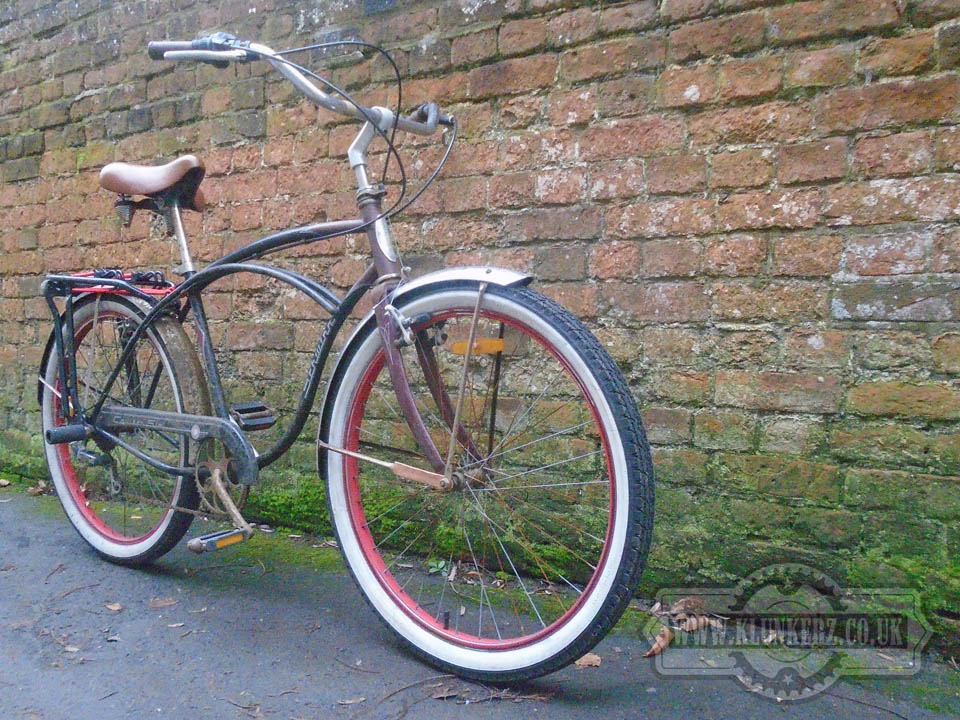 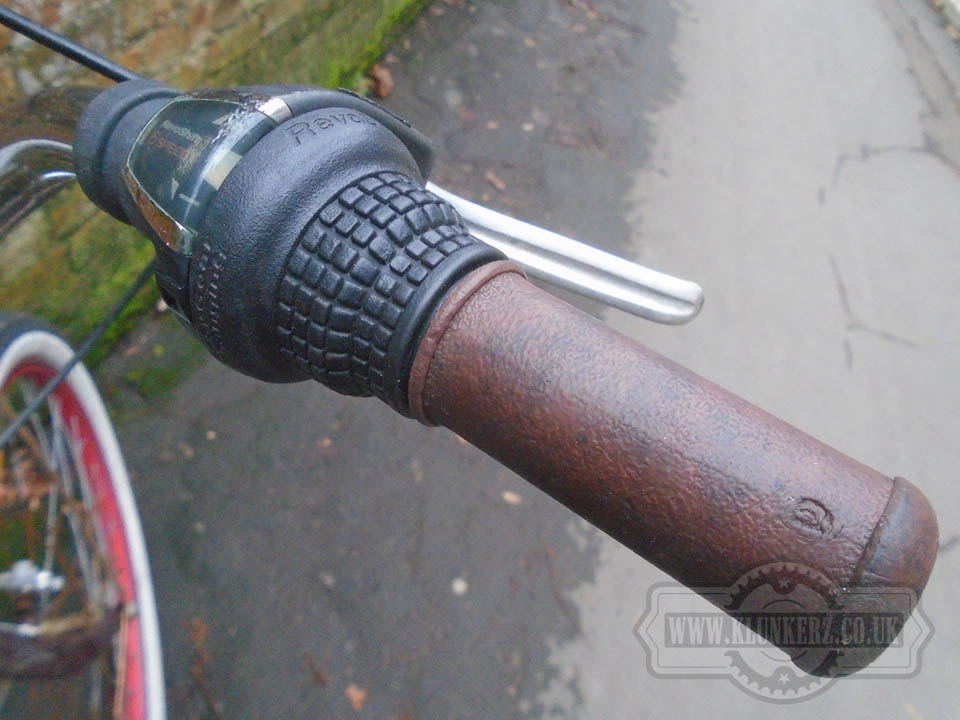 Other improvements, if you can call them that was to fit the  'grifter-shifter' from the Bikini Hurricane to the Schwinn so that despite not being my preferred choice of shifter, atleast it works. My feeling is that at some point I'll track down an old friction shifter and fit that instead. 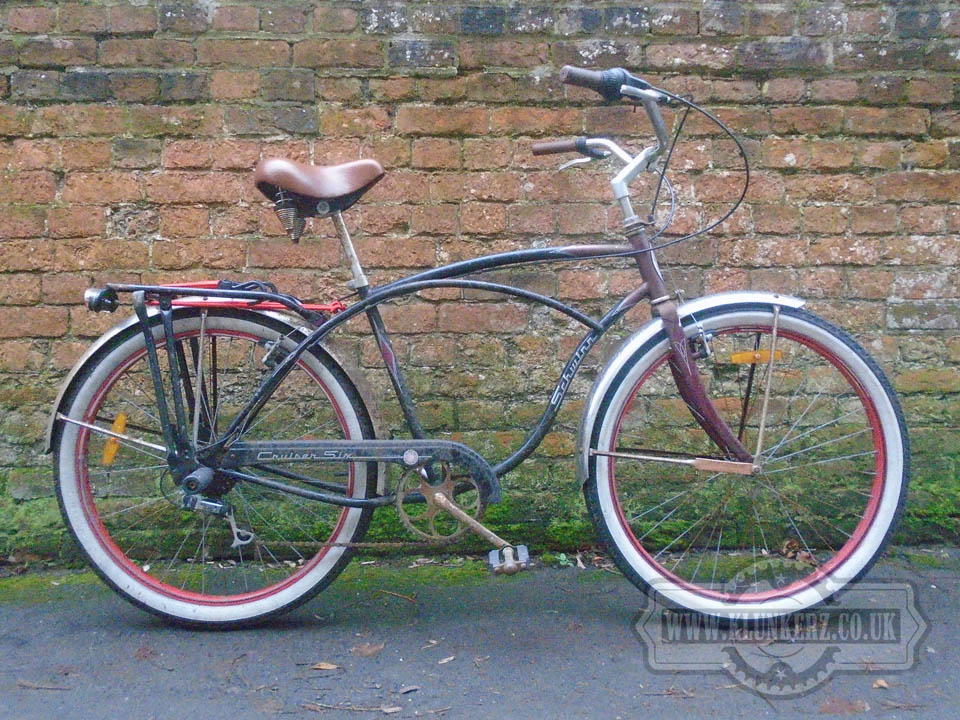 Also, while I was swapping out the wheels from the Hurricane, and replacing them with the five spoke aluminium wheels from the Falcon I bought the other week, I figured that I might as well put the Hurricane Wheels straight onto the Schwinn. The only problem was that as I had expected the bearings on the rear wheel were worn right out. They were so bad that the bearing cage had actually broken up. So a set of new bearings, and some grease, and they were ready for action in their new home on the Schwinn. To be honest I think I prefer the red rims these wheels have over the silver rims the original wheels had.

I think that the more I do to this, the more I like how it looks. Right now I think I want to change the saddle for something older looking, so another rummage through my stash is in order, and perhaps change the mudguards as they're chrome, and very rusty. I think they're OK, but as I have the white ones from the Bikini Hurricane kicking around that aren't quite so rusty I might just pop them on. Although, they are a bit dented, I wonder what looks better rust, or dents? I don't know, I'll have to give it some more thought. So for now I think I'll just ride it and enjoy it as it is for a bit.