Further fettling, if you can call it that has been happening to the Cruiser Six. I'm pretty sure that the worn and patina'd look is the way forwards for this little machine. The other day while I was out and about on it I had left it parked in the town, locked to a railing. When I arrived back I found an elderly man looking at it. As I started to unlock it he commented that it was exactly like the one he used to use to deliver newspapers back home in Oregon in the early sixties. He went on to say that it was good to see that a 60 year old bike was still being used and enjoyed, even if it was a little on the rough side. I laughed and said that it was far worse than it looked, as it was probably only a 25 year old bike! He looked at it and said really, why does it look so rough then? I told him that my feeling is that it was someones commuter bike, and by the look of things they didn't really care about it, so it was left out in all weathers. I went on to say that I think it had the been abandonned in a back yard for years too prior to my getting my grubbly little hands on it. He asked me if I wouldn't mind if he took a few photos of it. I said that I didn't mind at all, but I felt that the town centre probably wasn't the best location for it, so if he wanted me to move it to somewhere else, then that would be fine as I wasn't all that busy. He found a location nearby, and I rode my bike along the road to lean it against the wall for him.

When he got there he fumbled about in his bag and produced an Olympus Trip 35. I said to him that I was quite into old cameras myself, and hadn't seen one of those for years. He said that he bought it brand new when he came to live in the UK in the early seventies, and that he was probably the last person using film. I rummaged about in my bag and said, No you're not, as I produced my 1963 Kodak Retinette from my bag.

We had a little chat about old bikes and old cameras before I had to go because I think that my littlest Monster who was with me was starting to get a bit fidgety, but he promised me that he'd send me some shots of my bike once he had developed the film. 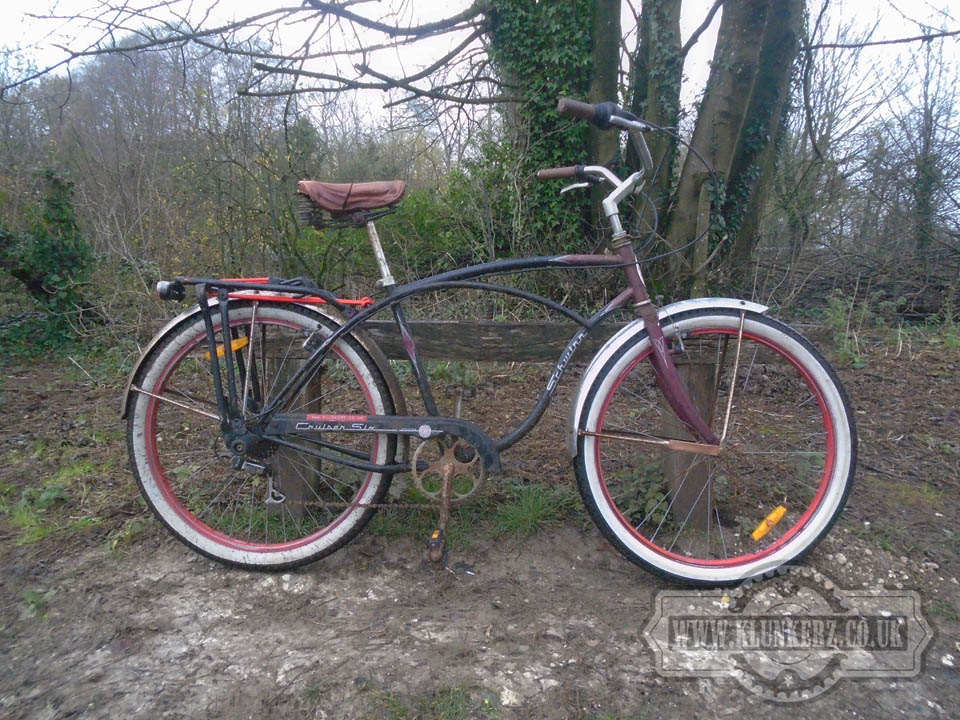 Then my littlest Monster and I were off on our little bike ride. She thought it was funny that the old guy was more interested in my rusty old Beach Cruiser than her less rusty Mountain bike, even though her bike was probably older than mine it was probably in better condition. I said that this was probably because he associated with the rusty old Beach Cruiser, as he had owned one when he was a young boy, and it probably took him back to his youth back home in America. She looked at her Giant Rincon and said, so when I'm old, do you think I'll think about when I was a child if I see someone out on a bike like mine? 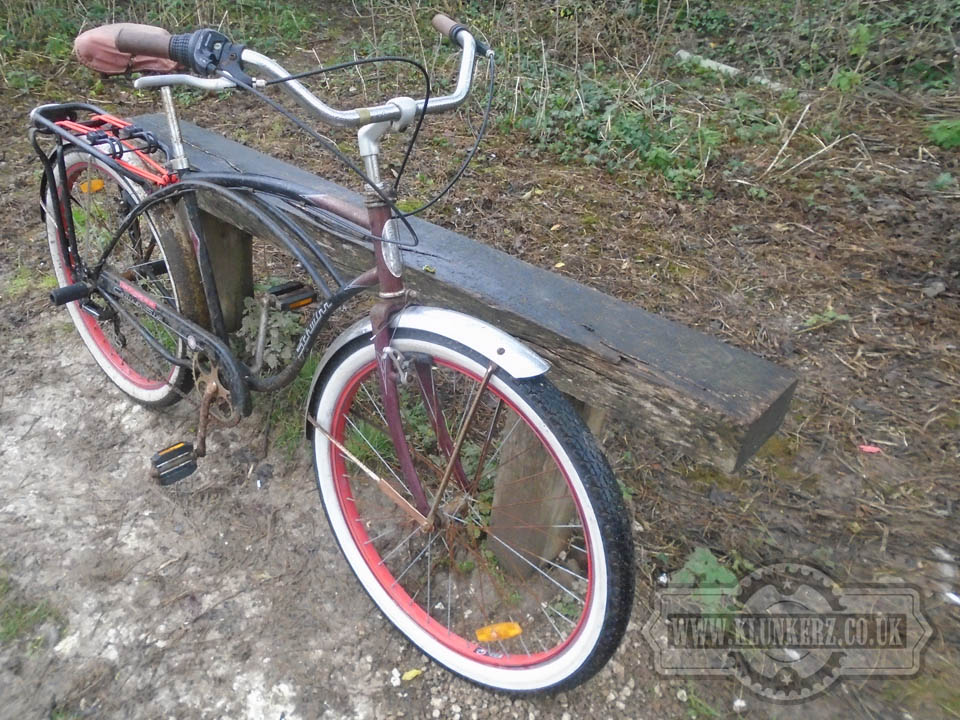 I looked at her Giant that she uses for school and said probably, especially if you happen to see one complete with a rack and mudguards! But my feeling is that you will almost certainly be taken back to your childhood if you should happen to come across someone with a Raleigh Mustang like you built for yourself, because my feeling is that you will think more about that bike than you'll ever think about your Giant Rincon. She thought about that for a second, and said that she wished she still had it. I've not told her that it's up in our loft. I don't know why I put it up there, but it's up there with the first bike her older Sister built for herself too. But I did tell her that if she liked, she would be very welcome to have the Raleigh Mustang with the 20" frame that I have in my collection. She said that she would think about it, as she feels that the 20" frame might be a little big for her right now. Perhaps over the Christmas break we'll have a look at it. 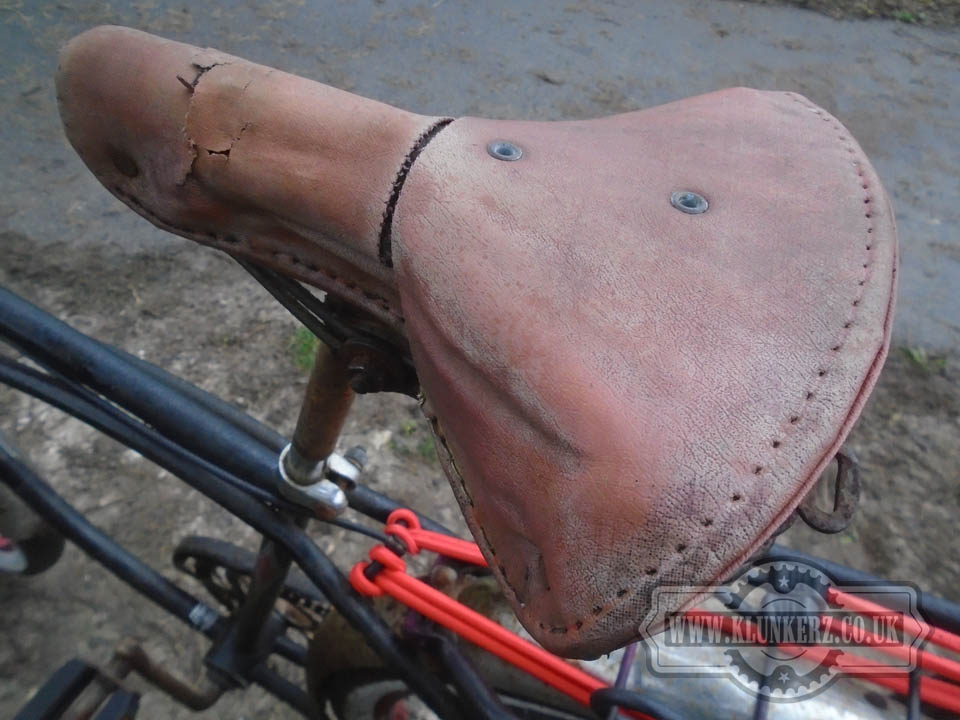 New saddle she said, man that thing looks like it's got dermatitis covering its arthritis! I told her that it felt like it does too! She asked me why I had fitted such an awful seat, and what was wrong with the one that I had orignally fitted. I said that the one that I had originally fitted was in almost every way better than what I've got now. But it just looked too new for the bike, it didn't match the patina. So I changed it for this one which looks old, and weathered so that it matches the looks of the bike. It's even almost as comfortable as the newer looking one that I had on it before. However, I'm not sure that this one is staying. The problem is that when I put it on, before heading out to town and our little ride, it looked OK. But during our ride the stitching came undone where the back half of the saddle meets the front half, and the material on the front half has started to split while I was riding it. My feeling is that both the thread used to stitch it together, and the material have rotted. I must admit that I am a bit dissappointed about this as it's the only old weathered saddle that I have. Apart from that I'm back to either the saddle I chucked on originally, or various BMX, Racer, or Mountain bike saddles, none of which will go with the look I am after. 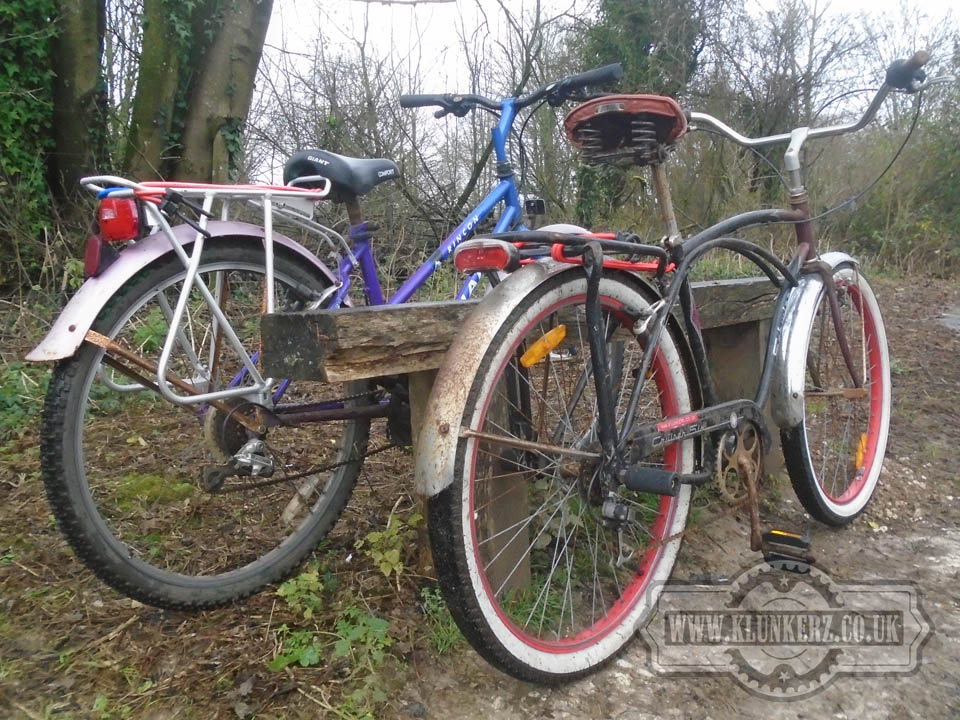 I thought about browsing fleabay for another one, but my feeling is that if I managed to find another one I'd have the same problem, due to its age it'll probably come apart once I start to use it. That being said, perhaps I should browse fleabay to see if anyone still makes this style of saddle. Then perhaps buy one and artificially try to age it to match the looks of the bike. I don't know, I'm going to have to give it a bit more thought, although I am concerned that my Gentlemans vegetables might at some point get pinched in the springs that lurk just beneath the big split where it's come unstitched. So maybe it might be worth doing a little bit of duct tape maintenance to this saddle before my next ride.

Other things that I think are due for change are the mudguards. The more I think about it, the more I think that slightly rusted, and slightly dented painted mudguards are better than very rusty chrome mudguards. I think that the thing that finally made my mind up was looking at my littlest Monsters Giant Rincon parked next to my Schwinn Cruiser Six. I liked the way they have that little bit at the trailing edge that is flared out a bit. I'm fairly sure that the original mudguards from the Bikini Hurricane had that feature too. Although, what I don't like about them is that they are white in colour, so perhaps if I do fit them I go over them with some rattlecan black paint first. I don't know, perhaps I should try them just as they are first, but time will tell, and as ever, updates as they occur.