Since buying this junk I really have been wondering just what kind of idiot would want to restore a Daewoo Genius? I can't be the only one surely? I've asked around in my cycling friends and have been met with pretty much the same response, why? Well, I dunno, but I think that partly it is because I really like the bikes from the cheaper end of the spectrum. For one thing they are cheap to get in the first place, and for another, they're generally built in a more heavy duty fashion, so they tend to be less fragile than the cheap stuff that is built for lightness. In my opinion at least where bikes are concerned if it's cheap you want then it's got to be heavy. If it's light you want then you're going to need to dig deeper, as it's going to be expensive. If you want it to be both cheap and light, then it's going to be rubbish. So cheap and heavy is the way forward for me, actually, it's a pretty good description of me too, especially with Mince Pie season in full swing! 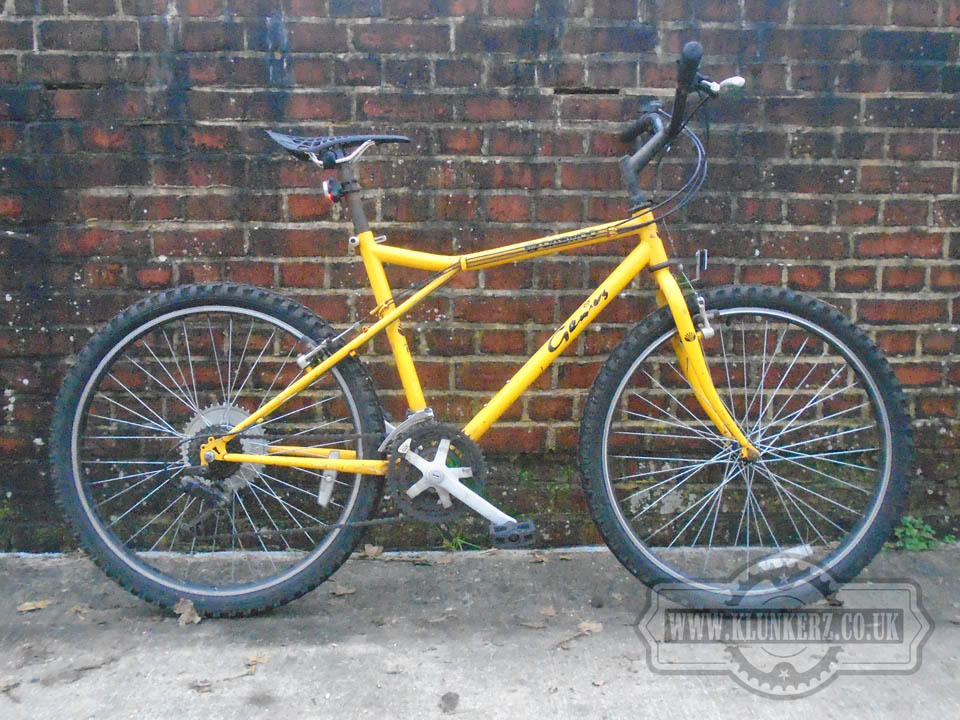 But why the Daewoo? Well, like I said before, and even the last time I had one of these Daewoo Genius' it's the frame that draws me in, I know thats it's not as beautifully curvy as say a beach cruiser. But I like the quirky little kick up at the rear of the crossbar, and the way the seat stays cross the seat tube to meet the cross bar, I find the whole design quite interesting. But having given this a little more thought over the two or three weeks that I have been riding it, I think it's more than that. I think that one of the things about it that really appeals to me is that even from a cheap bike perspective, this really is scraping the bottom of the barrel, much like bikes like the Univega, and the Magna you expect them to be utterly rubbish, and when they're not it's a really nice surprise!

So the Daewoo is going to join my little collection of bikes, perhaps not forever, but atleast for the foreseable future. I plan to tinker with it for a while yet, and try to make it the best bike it can be, atleast for me, other peoples opinions may vary! You may be wondering where exactly I'm going with this, well to be honest I'm not really sure, but I've had a good dig through my stash, and there's nothing in there that I really want to use on it. So I've been casually browsing fleabay, and I've even made my first purchase. I wasn't really looking for a saddle for this bike, I was after one for the Schwinn Cruuiser Six, but this turned up... 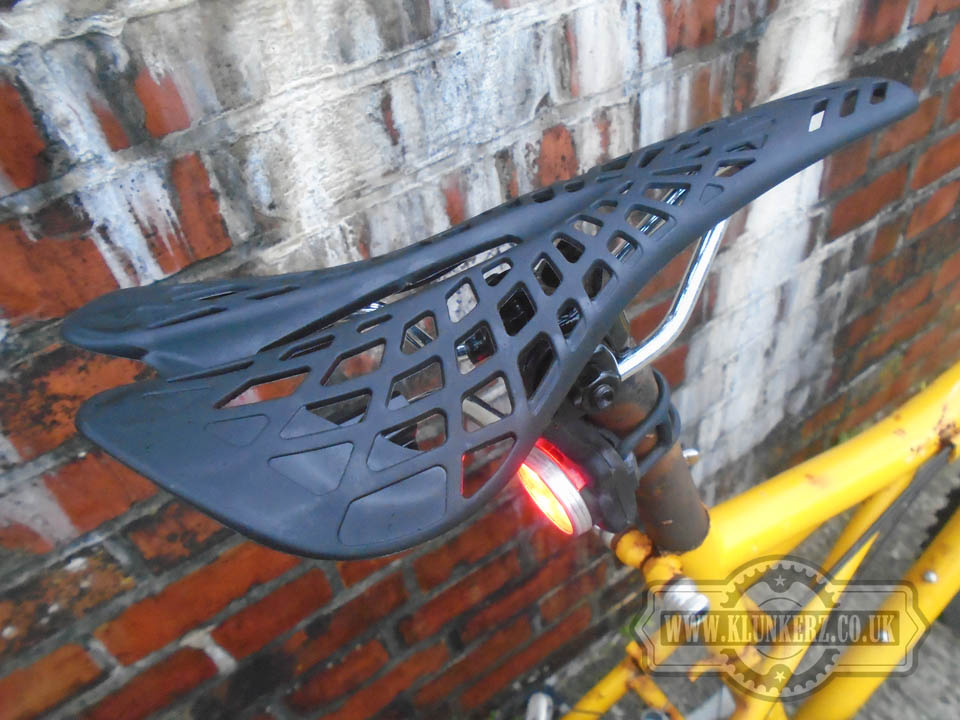 Allegedly a brand new super light racing saddle. Well as the auction was ending, and it had no bidders on it I thought I'd open the bidding and won it for just 99p with free shipping. It must've cost them more to ship it than I paid for it, but as the little parcel had no stamps and was franked by a machine I'm guessing that somebodys workplace paid to ship it to me. Anyway, it arrived a couple of days ago, and upon inspecting it, it really is light. I think the saddle clamp that holds it to the seatpost is heavier than the rest of the saddle. Now, I'll be honest, I wasn't looking for a light weight saddle, and this is probably more suited to some lovely light weight Racing Bike that is being ridden by an athletic lycra clad person, rather than an old crappy steel Mountain Bike ridden by a fat middle aged pie-eater, but I thought I'd pop it on today, and give it a go. 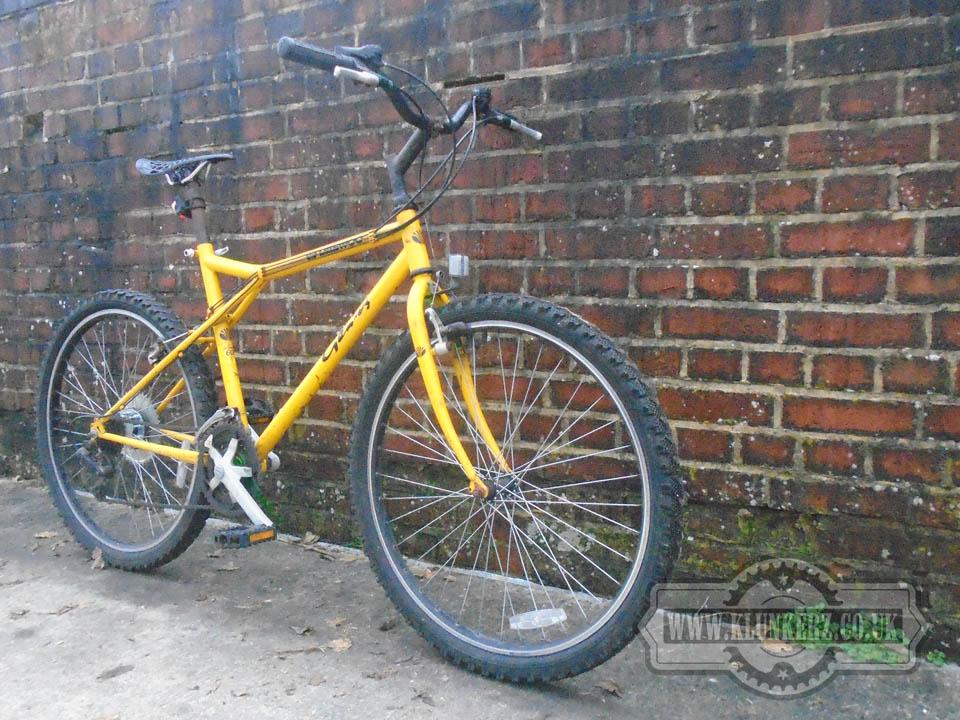 To be fair, I was expecting it to be absolutely horrible, and I fully expected that by the time I returned back to BelongaClint I would feel like I had become one with the bike, and we would be joined forever, by a saddle that was lodged deep into my bum. But no, well, not at first anyway. To begin with it really wasn't too bad at all, but by about a mile or so into my ride I had to stop and make sure that it wasn't already inside my bum! The good news is that it wasn't, but it was a bit uncomfortable, however I pressed on, and a couple of miles later I was starting to get into the groove, or perhaps the saddle was, but whatever, it was starting to get a little more comfortable to ride on. An hour or so later and I was back outside my house, and it didn't really feel too bad at all. I'm thinking that much like the hard plastic saddle on the Univega, the more I ride it, the more I will be able to tolerate it. So it's going to stay... Atleast for now. Besides, unlike the saddle that was on it, when it rains it doesn't soak up all the water like a sponge, then release it all on my bum when I ride it. So it can't be all bad! 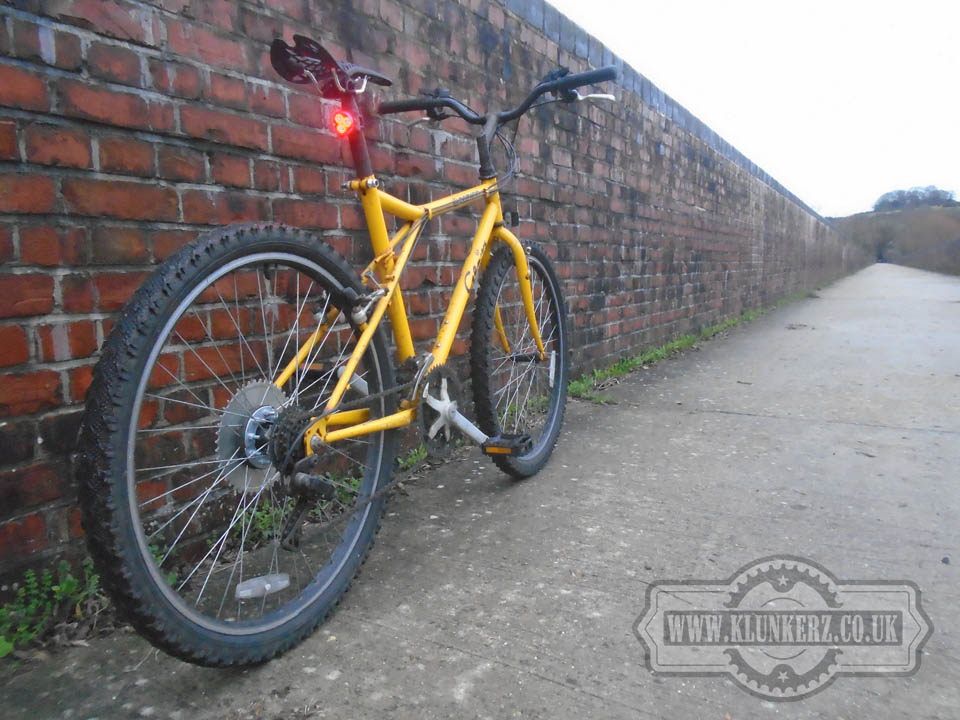 So that's my first little modification done on it, even if it was more by chance than judgement. As for where I'm planning to go from here, well, my fleabay watchlist is filled with bit's and pieces of bike that really have no place being on this particular bike. Part of me, the sensible part, is saying not to go mad and spend out on lightweight parts that have no place being on a bike made from gas pipe that is being ridden by a heavy middle aged man. But then there's the idiot inside me, and in me, the idiot shouts the loudest! The idiot wants me to spend the money, buy the good (expensive, well for me atleast) parts that are light and shiny, then strip the whole thing and re-paint it! I've really got to get hold of the idiot and gag him! But for now perhpas I'll let the idiot run with it for a while, see what we'll build. Only time will tell, but hopefully a better bike will emerge from what is already a bike that really isn't too bad to start with. But for now we'll have to wait and see how my auction bids go, and what direction the Daewoo Genius takes.