Okay folks, now then, it's been pretty bleak out there on my bike just lately, despite being over a month past the Winter solstice, it still seems quite dark while I'm out and about on my bikes. The days have definately lengthened dring the last month or so, but the sky always seems to be some sort of shade of grey, and not the blue, peppered with white fluffy clouds that I crave so much. 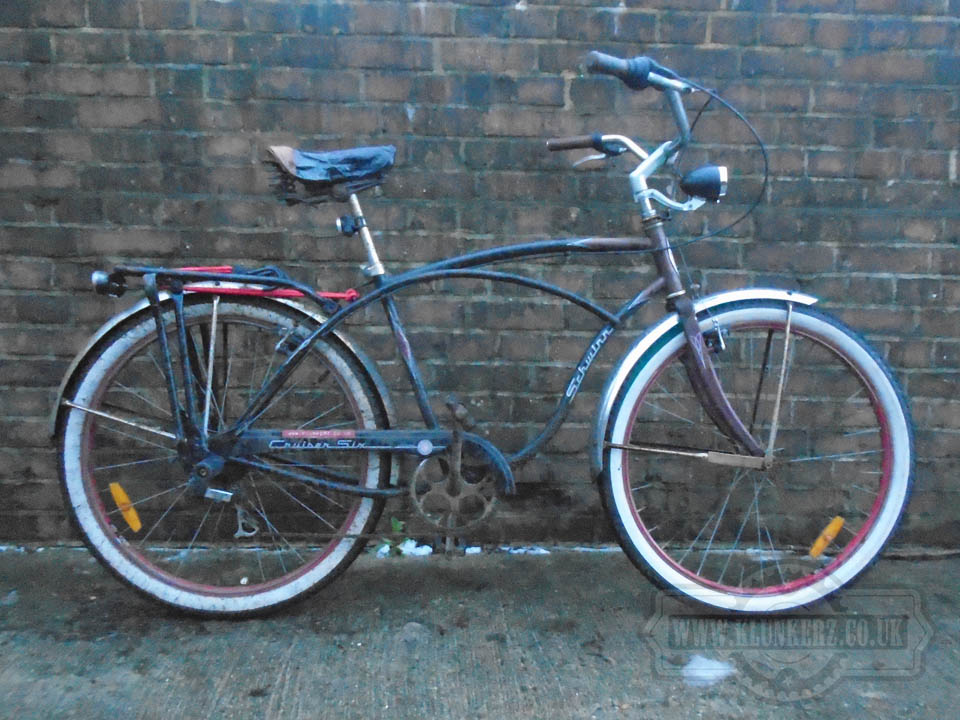 Since it's been a bit gloomy I have been riding with my lights on pretty much all of the time. The trouble is that finding a front light that looks like it belongs on the front of the Cruiser Six has been a bit of a challenge. I've been keeping an eye out on fleabay for some sort of old, slightly rusty metal headlamp that I could take apart, and fit an LED light and batteries inside. The problem has been that the lights that I've been finding have either been too rusty, or too expensive. I dug through my stash and the best that I could find was an old Dynamo set up, and I thought about fitting that, but I just didn't fancy using the little Dynamo generator, I've always hated the fact that when I stopped, so did my lights. I decided that I'd hit fleabay again, and this time look for anything new or old that I thought might fit the bill. 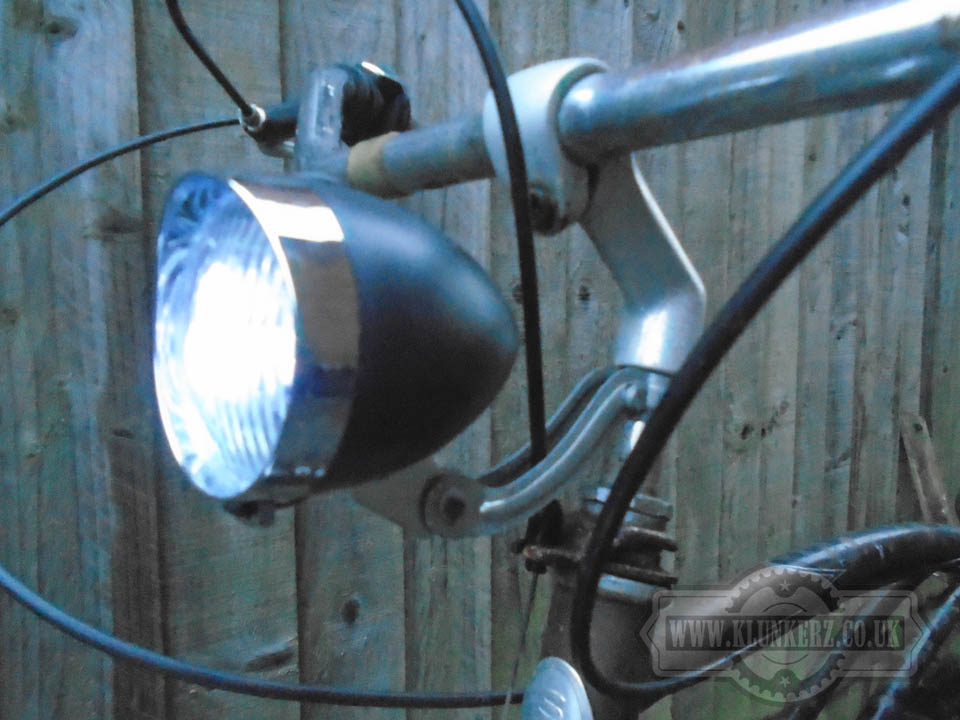 Putting in cheapest first I soon came across several of these small, old style bullet headlights. I thought that they looked the part, and as they are already fitted with LED's they'd be good and bright too. The trouble is, that most of them were located in China, land of the Coronavirus. I carried on looking until I got to a listing for the same headlight listed from a seller in Macclesfield. It was a good £3 more expensive than the Chinese sellers, but I figured that despite this, I'd have the one from an English seller. I clicked the Buy It Now, sat back, and waited for the postman to hammer on my door.

Several days later my postman did indeed hammer on the door... Like the Gestapo! I went to collect my parcels from him, and amoung them was my new front light, all the way from Maccle... China! It even still had the import documents attached to it. This thing has never been to Macclesfield in its life! I was quite irritated by this, not only because I'd paid an extra £3 over one that came straight from China, but because I thought that by buying one from a UK seller I would, in a very very small way be helping the UK economy, and not filling Chinas pockets. The other thing is, and I know this is a rediculous thing to say because it's everywhere, but I didn't want to import any more Coronavirus than we already have. Having had several friends in Hospital suffering from it, and even having having one that has died from it, it doesn't look good, and like everyone else I'm trying to avoid it.

So, respirator and gloves on, alcohol wipes at the ready I opened the box outside in my garden. My neighbours must think I'm an idiot, I'm stood in my garden dressed in PPE like I'm about to dismatle a bomb, not open a little box from China! Anyway, open it I did, and gave everything a good wipe down with the alcohol wipes before putting the packaging straight into the bin.

This first thing I noticed was that the light is completely plastic, even the chrome bit! I was a bit dissappointed by this as I was hoping to sand through the paint that I thought was convering the body of the light a little bit, and maybe sand through a bit of the chrome in order to speed up the rusting process, and make the light match the patina of the bike. But obviously thats not going to happen now, and so I took the light mounting bracket from my old Dynamo set up, and used it to mount my new front light. 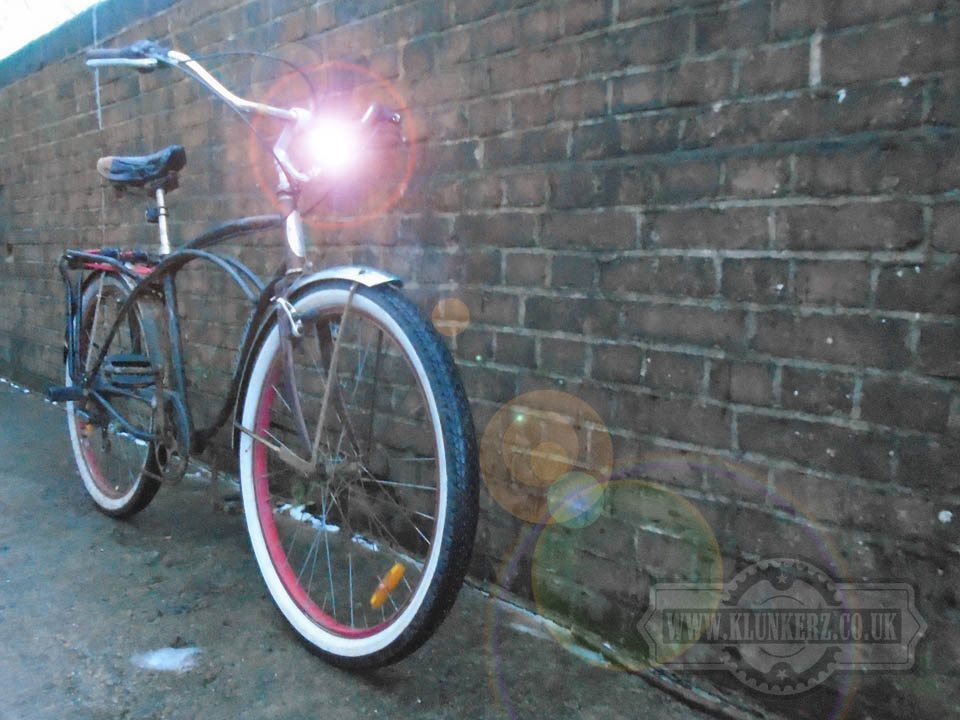 I'll be honest, I thought it looked pretty good, but better still, it's pretty bright, although it only does on or off, no flashing or pulsing mode. However full time on is better than nothing, so I'm pretty happy with that.

With my new light mounted I decided that I'd turn my attention to my seat which is coming apart at the seems. I have been trying to track down a new one that looks like this old one looked when it was new. But much like the headlight I couldn't find anything that fitted the bill quite right. I found some new ones that looked quite close, but they just looked a bit cheap to me, so for now I'm going to stick with the old one. 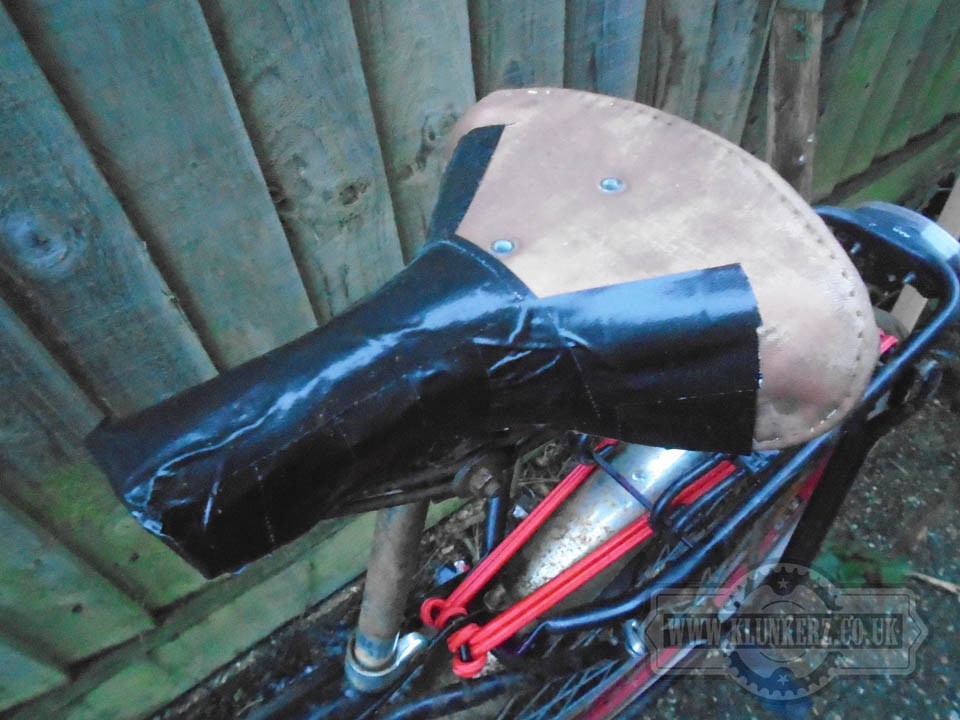 Now, readers of my other blog of babble may well already know about just how good military grade duct tape can be. Sadly however Mrs Clint appears to have lost my little stash of military grade duct tape, and so I am having to resort to Toolstations duct tape instead. I'll be honest, off the roll it just doesn't quite feel the same, it feels thinner, and less adhesive that the military stuff, but it's all I'm allowed to have at the moment, so it'll have to do. 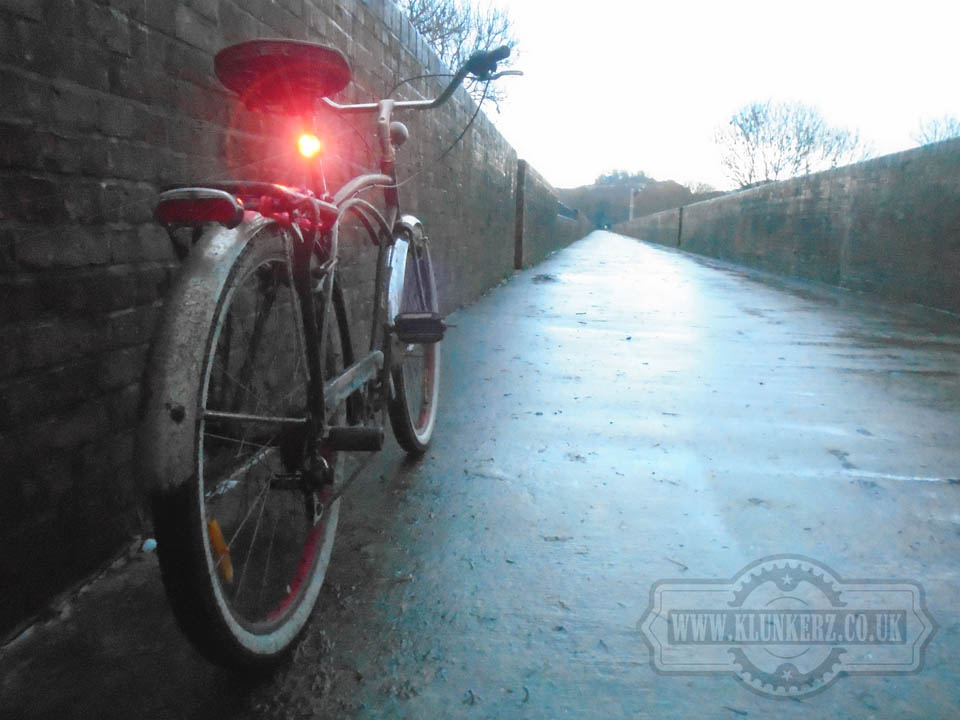 I took the saddle off a couple of days back and left it to thoroughly dry out on the heater for a couple of days before trying to apply the duct tape. Once I thought it was dry enough I carefully wrapped it with a couple of layers of tape pulling it tight, and smoothing it down because nothing points at bad engineering more than creases in your duct tape. I then popped it back on the heater in the hope that it might somehow make it look better, and the glue to adhere more. After another day or so on the heater I took the saddle back out, and fitted it back on the Cruiser Six. To be fair I've not got a lot of confidence in the Toolstation duct tape, but with the saddle back on it was time for a test ride.

So far so good, with three or four miles on the newly taped together saddle it all seems to be holding together OK. I wondered if my weight bouncing up and down on the saddle would either strech the tape to it's limits and it would tear, or it would just pull the glue off it, and then let the tape bumch up under my ass as I rode along. But so far it's all good. I think the secret to longevity for my duct tape repair is going to be keeping the saddle dry as I think once water gets into it, then it will almost certainly bunch up as I ride along. So I have liberated a carrier bag to leave over the saddle while the bike isn't in use. I'm not sure how much I've prolonged the life of the saddle for with my duct tape repair, but if it can hold together until I find a replacement that'll be fine. Of course, if I find it's replacement, and it's still holding together then I'll keep the duct taped saddle on there until it falls apart, it's pretty comfy!

So a pretty successful test ride of my new light, and repaired saddle... Almost! About a mile from BelongaClint I got that sinking feeling, and I noticed that it was becoming harder and harder to pedal. I looked down, and the back tyre was looking a little bit squashy! I wondered how much further I could ride until it was too flat to ride, and so I pressed on. I managed to get about half a mile from home before I could feel the rim start to bounce on the road and I had to get off and walk. 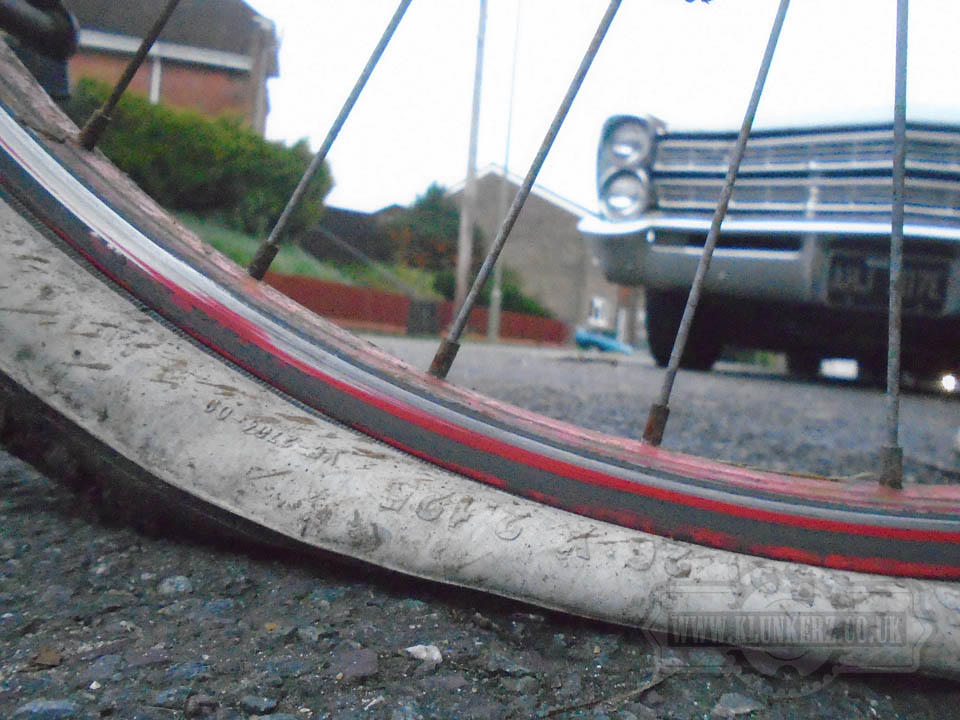 So one month into the year and I've had my first puncture, fingers crossed that this isn't the start of another spate of punctures like I had last Summer!