With the Kona Smoke gone I sat back and wondered what might be next on the hit list. I'll admit that the Huffy Cherokee didn't really want to be it, but as I've not ridden it, or even touched it in ages I thought that maybe it was time to say goodbye. 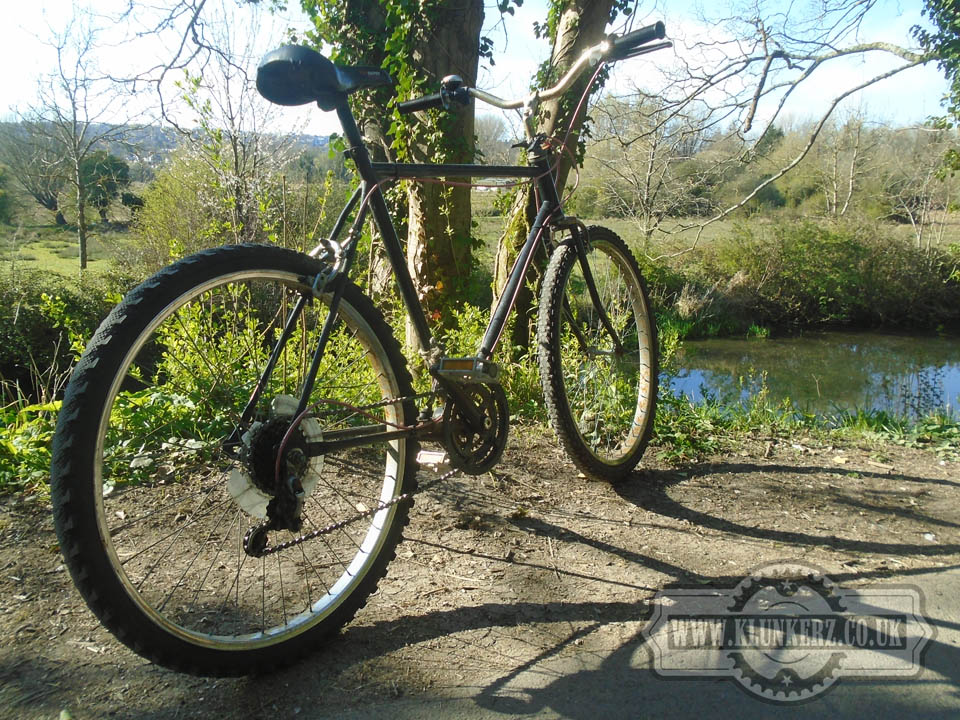 Besides, it has been pointed out to me lately by one of my cycling friends that I have a fair amount of bikes in my collection that are very similar, the Huffy Cherokee being very similar to the Magna Fugitive. Although to me they seem quite different, but I can kind of see what he was saying. 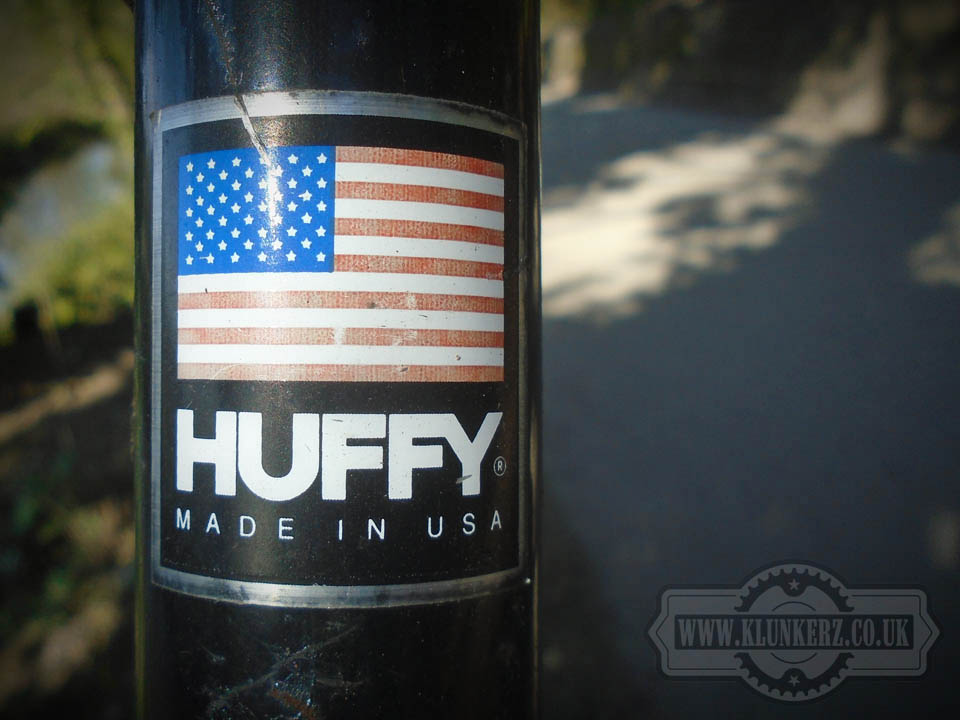 Anyway, I don't know what it is that attracts me to Huffy bikes, with the exception to the Huffy Sweet Thunder that my Cousin had when we were kids I don't really have any sentimental attachement to them from my childhood, and as we always had Raleigh bikes I have no real idea as to why I like the Huffys. But something draws me to them, and I find that when I come across one at the tip or whatever, I have a real need to buy it, and once I've got it, I want to hang on to it. Strange! 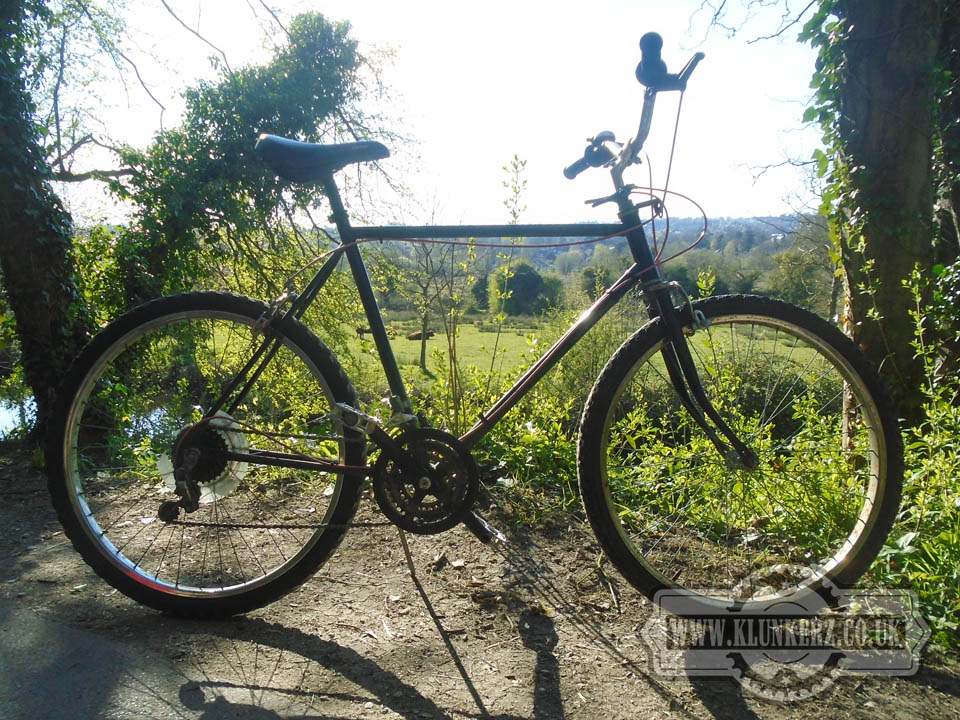 So parting with the Huffy Cherokee was not high on my list of priorities, but the culling must continue, and so I dug it out of my collection to take it for a spin. As I rode along I couldn't quite make my mind up as to what I was trying to do, was I trying to convince myself to sell it, or to keep it? I decided to try and think about what I'd need to do to make me want to keep it, how could it be improved? 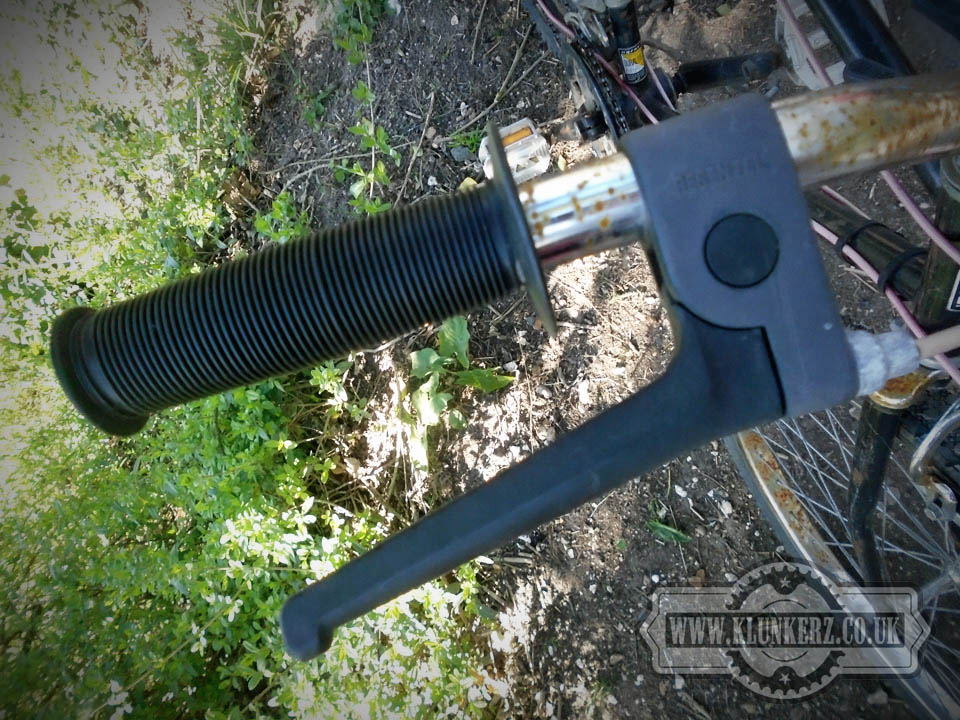 I remember thinking, two years ago when I got this thing from the tip that these cheap, nasty, plastic brake levers needed to go, yet here they still are two years later. I'll admit that I'm not short on brake levers, but I didn't seem to have anything in my stash that I thought would suit this bike. But man alive I should've replaced them, if for no other reason than they are damn ugly! 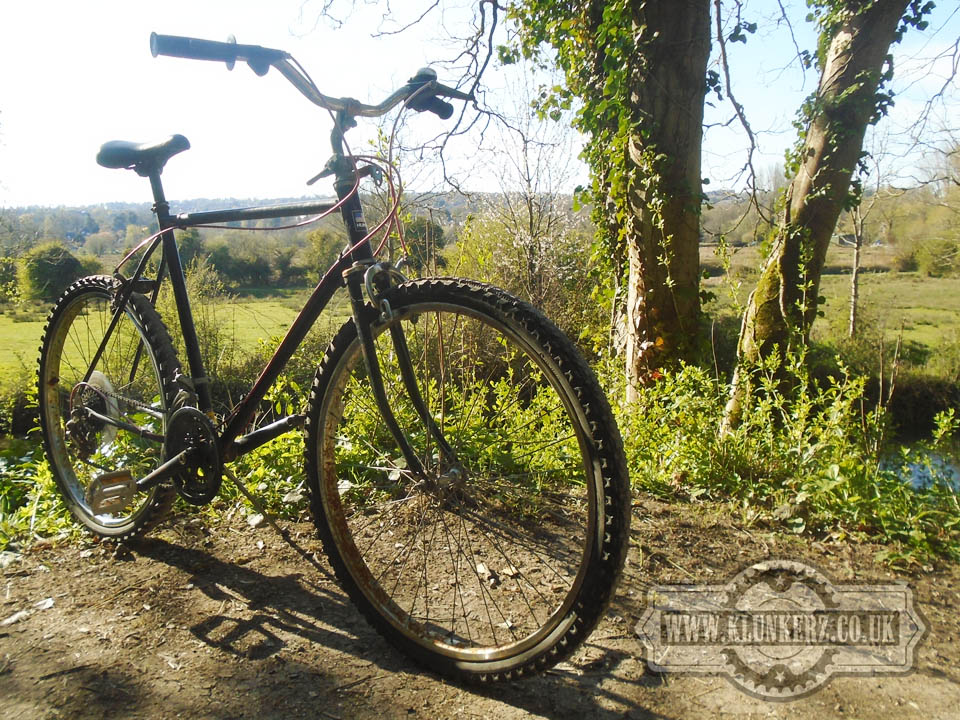 Actually, now that I was thinking about it I decided that everything to do with the brakes on this bike needed replacement, from the levers to the calipers. Not becuase it doesn't work, but because it was just not as good looking as it could be. The cables should be red, but they've faded to pink, and the calipers are just big clunky ugly things! Much like the brakes the gears could do with a freshen up too. The levers are stem mounted in a racing bike style, and have two big plastic levers connected to yet more faded red cables to the derailleur mechanism. I also thought that while I was at it, maybe I should change the steel wheels to aluminium wheels. 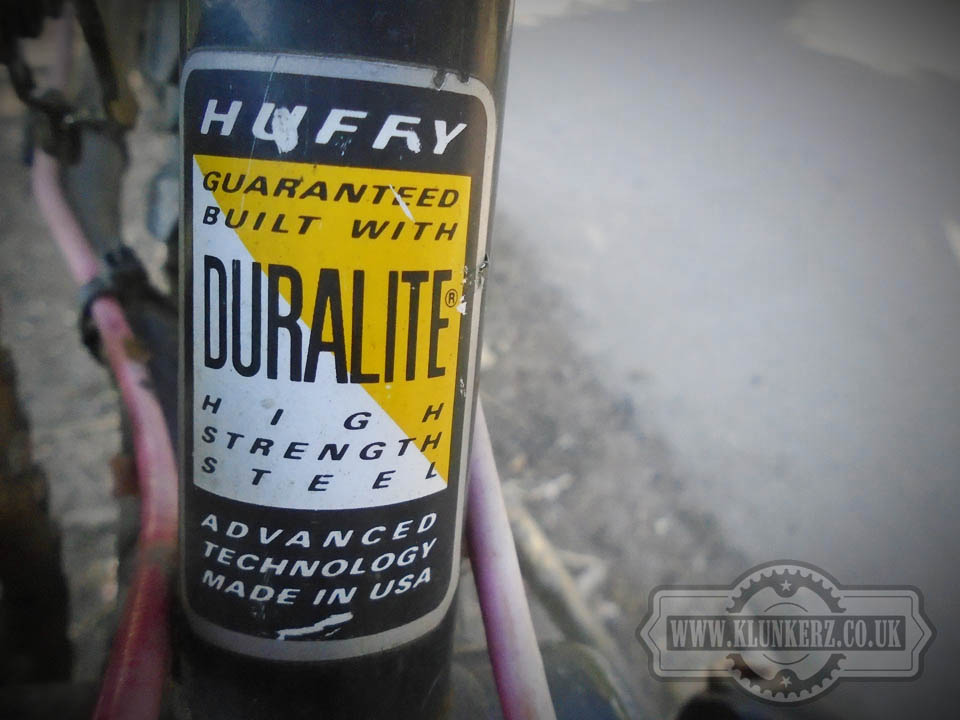 Because despite the frame being made of Duralite, whatever that is, lite it is not! That being said, in my experience the steel wheels are probably over half the weight of the bike. As I rode along the path formulating a plan of attack that would mean I was keeping the Cherokee I came across a young fella who was also out riding, and enjoying the Spring weather.

He seemed to be struggling a little, but as I passed him I looked at his bike... HUFFY! I looked at him and said, Heyyyyy, nice bike! Hey looked back at me and said, no it isn't, it's the worst bike I've ever owned! So I enquired what was wrong with it, because it looked pretty good to me.  The problem was that he didn't seem to be getting on with the coaster brake, and several times he had come off it because he had pedalled backwards to change gear, which of course activated the coaster brake. He went on to say that he wanted a retro mountain bike, and because this one was close, and the first one he'd seen he bought it for the sum of £50! But now he was going to put it back up for sale and try and buy something else instead. That was when I said it, I asked him if he would like to try my bike for a bit, it's a Huffy too, and is more like a mountain bike with regular derailleur gears, and levers on the handlebars that operated the brakes. I then foolishly said that if we ride to the Viaduct on each others bikes, then if he preferred it when we got there then he could keep my Huffy Cherokee, and I would keep his Huffy Chesapeake if he liked. we stopped, and swapped. 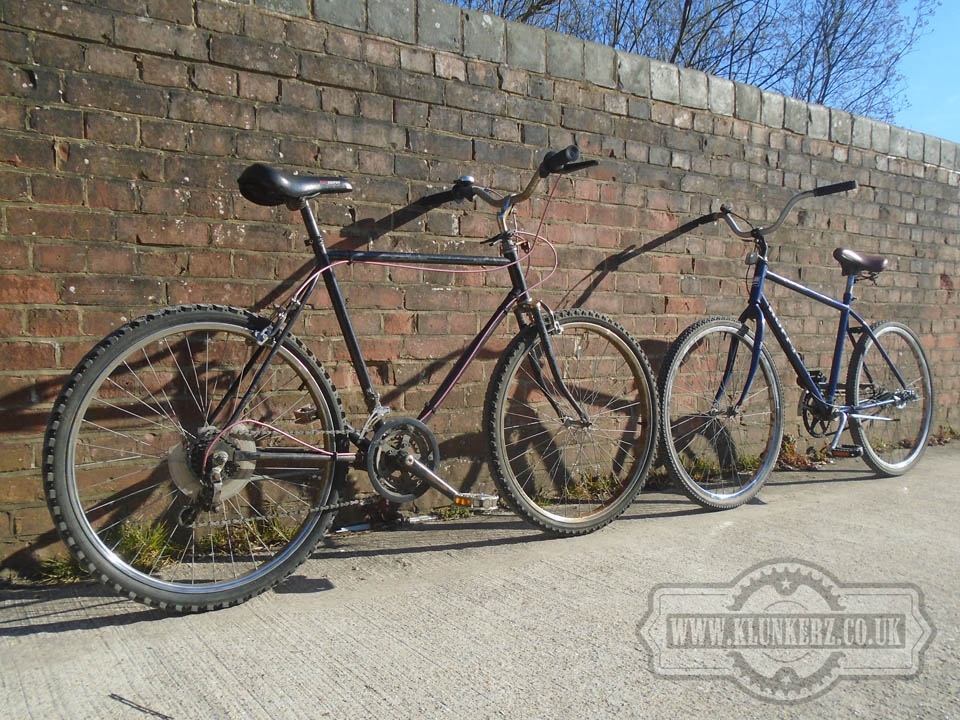 Then we rode on, I wondered what I had done in offering my Huffy for swap. I was undecided on if I should keep it or not when I left BelongaClint, but I was sort of on the side of keeping it when I met this fella, now the decision was out of my hands! I wondered what he was thinking, he didn't say much, just rode quietly along the cyclepath. About ten minutes later we had arrived at the far side of the Viaduct, and I told him that this is where I turn round and head for home. I asked him what he thought of my Huffy? "I think I'll keep it." He said, "are you happy with that one?" He asked. I'll be honest I was fairly happy with it, but the think the Cherokee is marginally older, and possibly slightly better looking, but it was too late as I'd already said he could keep it if he preferred it. So I told him that it works for me as long as he was happy with my bike I was happy with his. We shook hands, and he continued to cycle along the cyclepath, and I turned around and headed for home.

I watched him ride away on my Cherokee while I rode back across the viaduct, and wondered if I had done the right thing. I was undecided over what I was going to do with the Cherokee, but I had sort of got into the frame of mind that I'd keep it for a bit longer. I wasn't selling it because I was bored of it. I was selling it to raise funds, now that it's gone, I've not raised any funds, and I've still got a bike that I should probably sell. I don't know, this bicycle selling malarky is harder than it looks! So what will become of my new Huffy Chesapeake? Well in all honesty really I should sell it before I start to get into it and enjoy is, but I think we all know that selling it probably isn't going to happen for a while!