Other than to ride this a couple of times I've done nothing to it. When I got it I had in mind a little project thats been burning away at the back of my mind forever and a day, but after my first ride I started to sort of fall in love a bit with this thing. I felt it was just too nice to ride and look at to start messing about with. 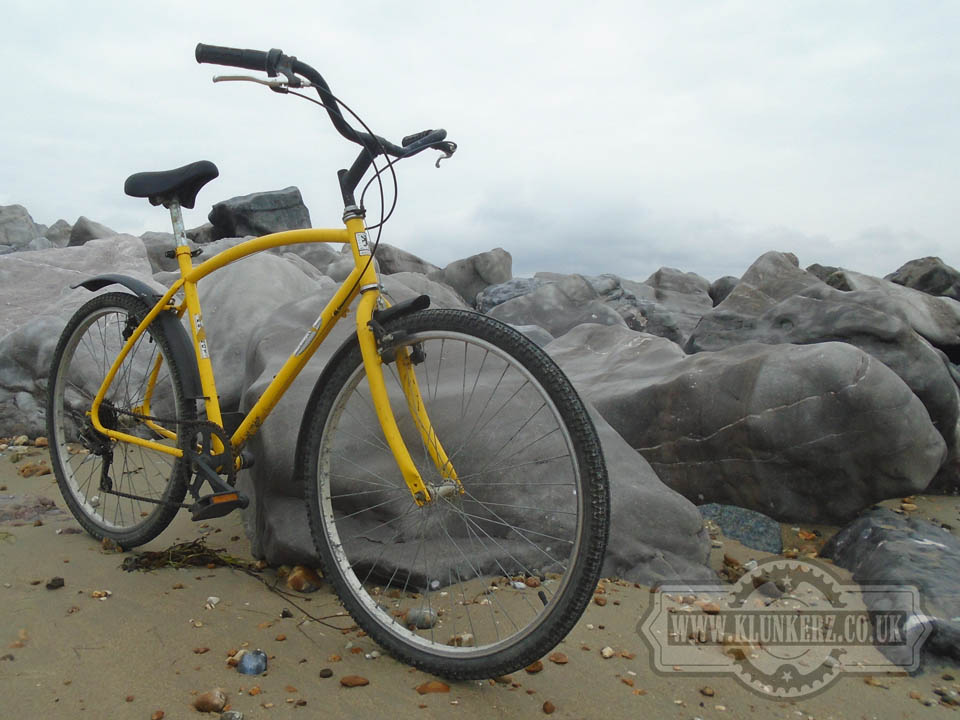 I rode it a couple more times trying to form some sort of plan of attack for what I was going to do with this thing, but the truth was that I felt that I might make it worse if I start to fiddle with it. So, after raiding my stash for upgrades I never got around to putting them on. Oddly, for me atleast, I just like it as it is. The trouble with liking it as it is was that as I didn't fiddle with it, I never felt the need to take it for a test ride. This meant that I hardly ever rode it, it just sat there, dormant in my collection like a great many of my bikes have done this Summer. 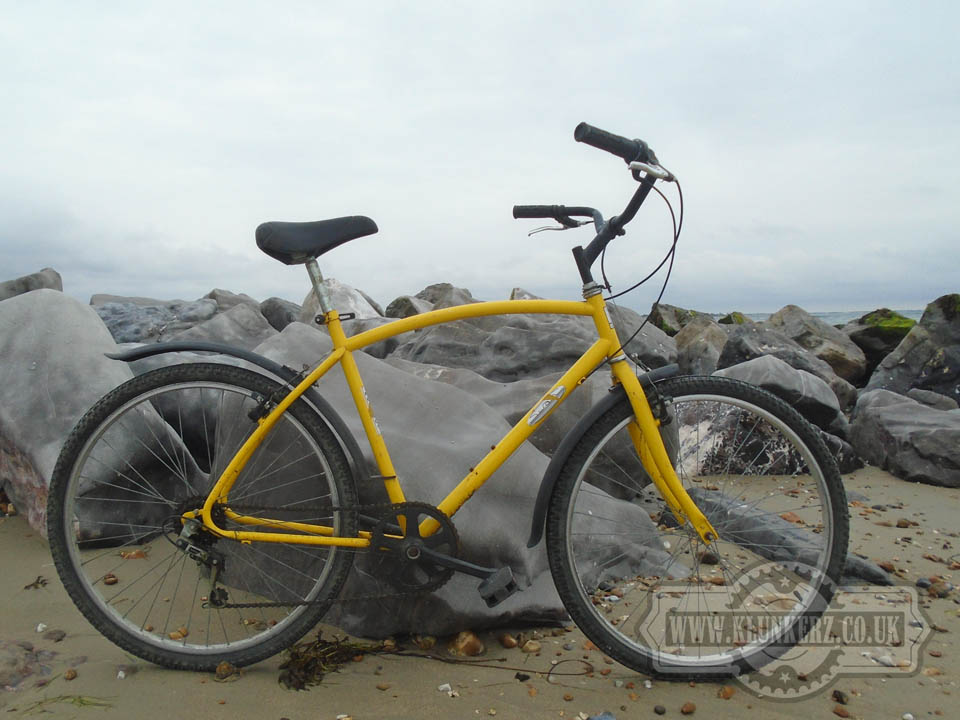 So, when I decided to take the Apollo Retro to the Beach for a cruise, and my friend didn't have a bike to ride I gave this a quick dust off, loaded it into the Navara, and we set off. I thought what we would do was to ride along the beach path until it just turned to sand and we could ride no more. Then we'd turn around, swap bikes, ride back to the truck and stop for Fish 'n' Chips on the way. That sounded good to me, I like Fish 'n' Chips! So with this and the Apollo unloaded we set off. The ride was pretty good and to be fair as I followed my friend along the beach path the view wasn't too bad either! 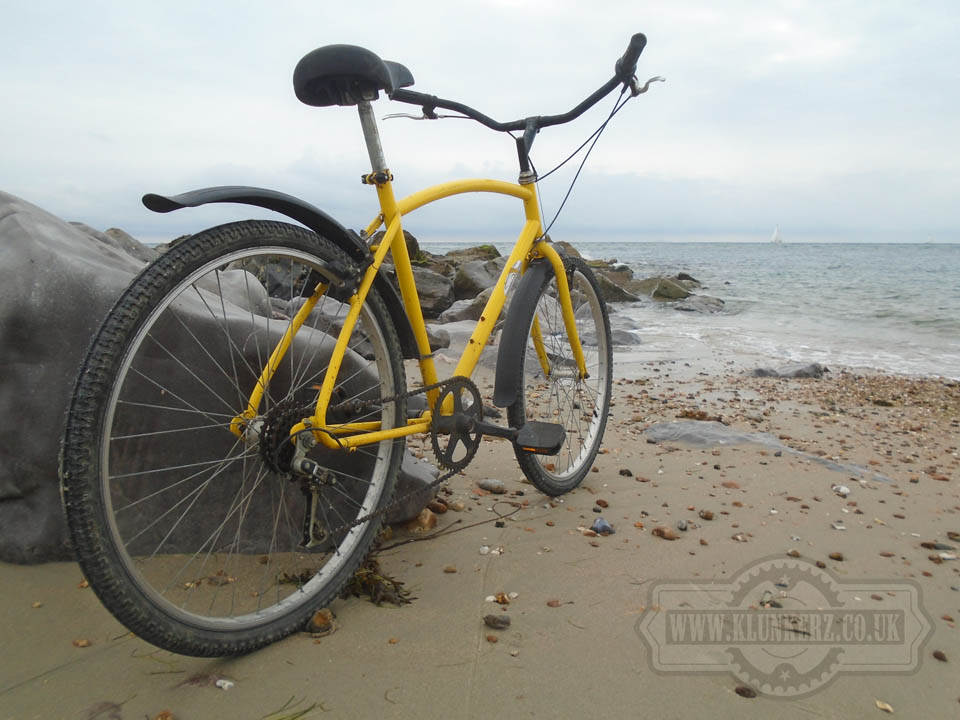 About half an hour or so later we'd pretty much run out of beach path, and were trying to pedal along the slightly compacted sand and gravel on the top of the beach. Pretty soon it became apparent that this wasn't going to work as the tyres were just too narrow to stay on top of the sandy gravely terrain, and we were starting to dig into it a bit, which is no fun to ride on. We stopped, swapped bikes, and headed back towards the chip shop. 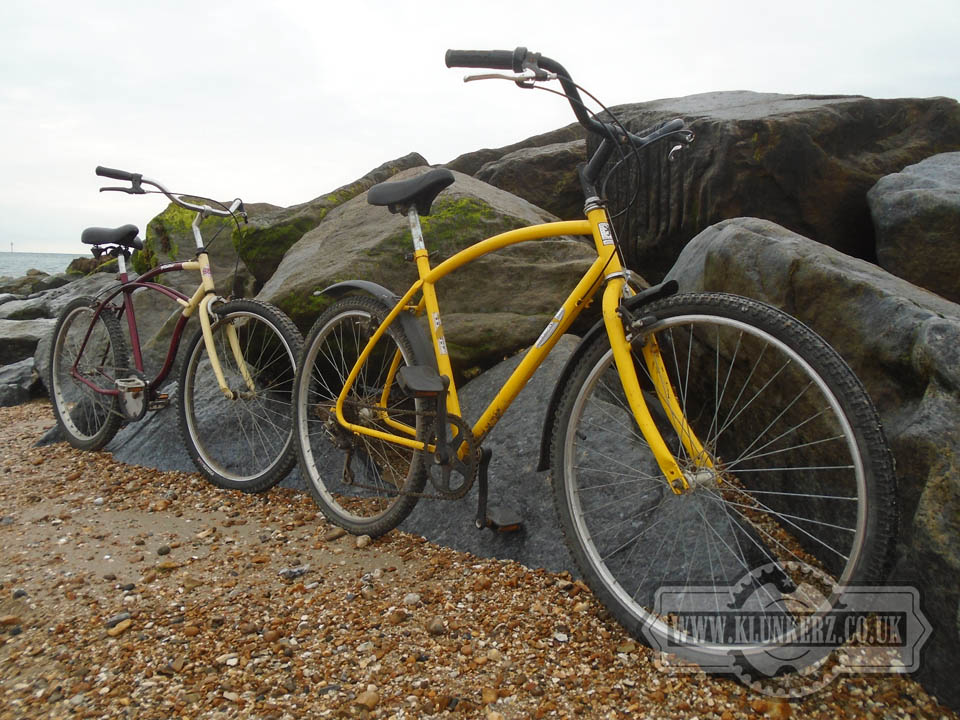 Within about 100 yards I remembered why I've not messed with this thing, it is so nice to ride, it's almost perfect, almost! I still hate that 'Grifter-shifter', and the only reason that I've not changed it was that I don't have anything better in my stash. The other thing is that the saddle isn't quite as sweet as I remember it to be. That being said this might be because since I last rode this I have managed to lose a few pounds, and therefore my lardy arse isn't quite as padded as it once was. But I managed the thirty minute ride back to the chip shop without too much discomfort. Perhaps if I'm going to be hanging out at chip shops again I should keep the saddle on it as my lardy arse will soon be padded out again! Although I've got to say that I hope not! So what are my plans for it from here? Well, I remember when I got this thing I thought that I'd be happy to keep this long term, and maybe forever. I still feel like this, I feel that this could quite happily sit in my collection along with the likes of the GT Dyno Glide, Bikini Hurricane, Magna Fugitive, Univega Rover, and all the rest of the junk that I like. So perhaps, if I'm going to keep it I should actually stop being a tight ass, and just go and fork out for a decent friction type shifter, and saddle. Then once I've done that maybe I should just ride it a bit more, and enjoy it for the lovely little machine that it is. Of course, once I start to change things that might open the flood gates to changing other parts, but we shall see, as ever time will tell. But for now I'm thinking it's time to put a few more miles on this bike before Autumn comes and Winter starts to set in.