I remember saying back when I got this thing that I thought that I would be quite happy to keep this long term, and maybe forever. To be honest, I still feel like this, I really think that this could quite happily sit in my collection along with the likes of the GT Dyno Glide, Bikini Hurricane, Magna Fugitive, Univega Rover, and all the rest of the junk that I like. However, sadly it has left me... Sort of. 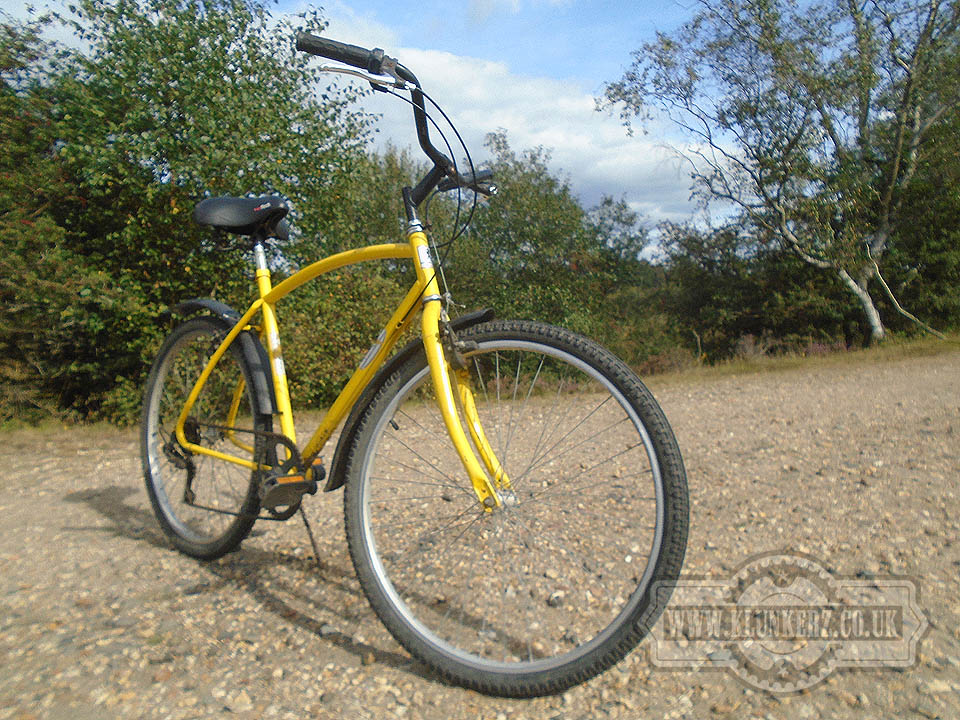 The thing is, for some time now I have been trying to convince a friend who my wife always refers to as my girlfriend to come out riding. As much as I enjoy the tranquility of solitute while I ride along sometimes its just nice to have a little bit of company, especially if I've trundled off to the the New Forest, or the beach or something to go for a ride. So 'girlfriend' and I have been riding a little bit lately, she's been struggling a bit this year, so I thought that getting her out in the fresh air might help her a little bit, and hopefully it is doing the trick. However, there was a problem, although she does have a bike that her husband got for her she didn't enjoy riding it, so seeing as I had a few bikes hanging around I figured she might as well try one of them, the one she gelled with was the Peugeot Swan 20. However, like me the last time I rode it, she didn't feel that the saddle was all that comfy, and asked me if I had a big ass saddle for her big ass. I dug through my parts stash, and voilà, one big ass saddle for one big ass... 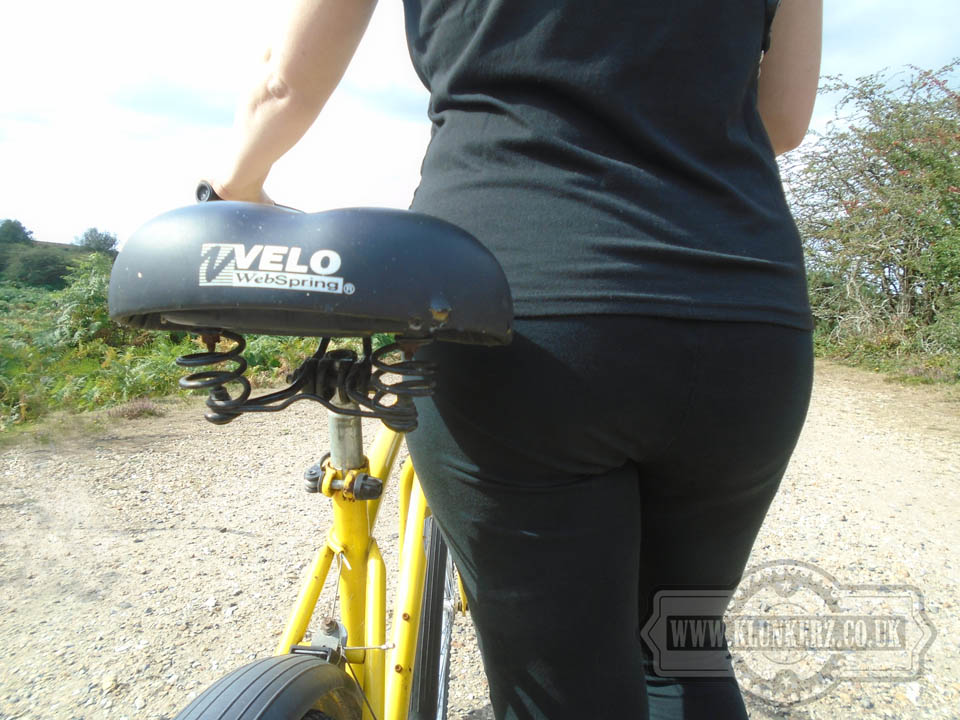 Hmm... I dunno, that doesn't look like that big of an ass to me... Umm... Anyway with the new saddle fitted we headed out for a ride in the New Forest. The route we decided to take was from the Burbrush car park along the Castleman’s Corkscrew track to the Old Station Tea Rooms at Holmsley. 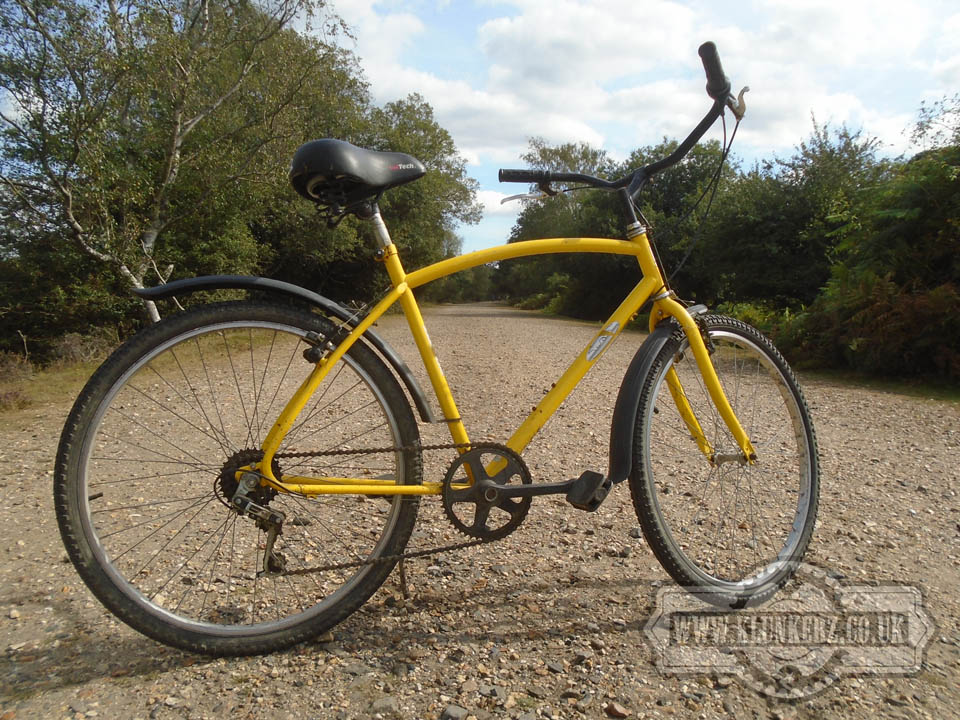 The Castleman’s Corkscrew was the name given to one of Hampshire’s oldest railway lines which ran from Brockenhurst to Ringwood and on to Wimborne. Completed in 1847 the line was promoted by Wimborne solicitor, Charles Castleman. The ‘Corkscrew’ referred to the circuitous route the line followed. Long stretches of the track bed have been retained as walking and cycling routes and the almost four mile ride along it to the Old Station Tea Rooms was quite a pleasant and easy ride. The route is on a slight incline, however the ride to the tea rooms was pretty much down hill all the way, 'girlfriend' lead the way, and I followed so that I could make sure that her new saddle was working the way it should. Incase you're wondering, it was, and before long we had arrived at our place to eat. The food at the Old Station Tea Rooms was quite pleasant, and not badly priced either, we had kind of a light(ish) lunch before hitting the track and heading back to the Mighty Navara to head for home. Despite being slightly up hill all the way back to the Burbrush car park it wasn't a hard ride at all, and before long we were loading the bikes into the back of the truck ready to head for home, and collect our little Monsters from school. 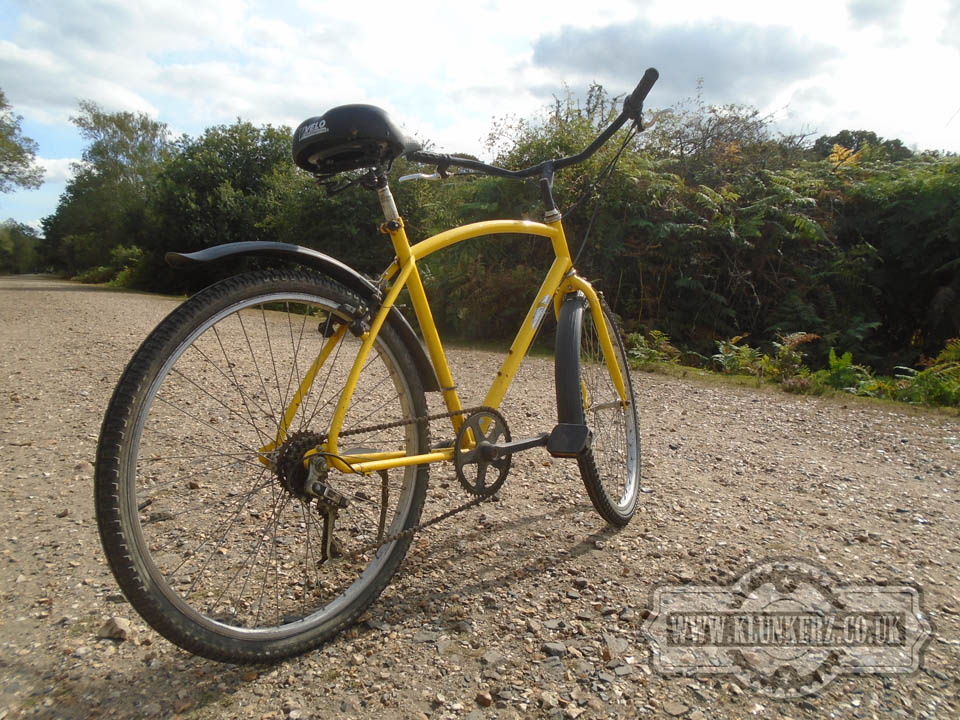 Once back home, and with Mrs Clints words of wisdom ringing in my ears about how I needed to get rid of some of my bikes I figured that if 'girlfriend' liked it, and promised to keep riding with me, then she could keep the Peugeot Swan 20 for herself. She agreed, but only on the condition that she would like to be only a fair weather cyclist, and I wasn't to expect her to come out riding with me if the weather was bleak! That didn't sound like a very unreasonable demand to me, especially as I've been a bit of a fair weather cyclist myself just lately, and so I agreed.

So with bike and 'girlfriend' dropped off I headed off to pick up my own little Monster before heading back to BelongaClint for a nice cup of tea. Arriving home her worshipfulness asked me where I had been, and I explained that I had been out cycling with 'girlfriend' for the day, and I had managed to get rid of yet another bike from our back yard. I figured that as this would be one less bike in our back yard she would be delighted, but no. She growled at me "Have you given her one?" I said, what? Outside in the New Forest? I realised that it was sunny and all that, but still a little bit chilly for that kind of malarky! I did however let her have a bike. It was clearly the wrong time for any kind of humorous comments, appropriate or otherwise from me, and her worshipfulness just growled at me before retrurning to her computer screen and work. If you do happen to be a long term reader of my words of wisdom, and you're wondering why Mrs Clint hasn't murdered me yet I've got to tell you, you're not alone. I've wondered it myself. The trouble is my mouth tends to say things before my brain has fully thought things through, and it's often only later when I'm thinking about my day, or writing this stuff that I think to myself, Ooh, probably shouldn't have said that! But that being said she knew what I was like, and how my mouth speaks before my brain thinks long before we got together so she's only got herself to blame.

So I guess that probably wraps things up for me and the Peugeot Swan 20, I really did like that bike, but hopefully I'll get to see it from time to time, and possibly even get a ride.

Now then, I'd like to talk about something other than my cycling adventures for this final part of the story. Some of you may well have been enjoying (or otherwise) my words of wisdom since I started writing this drivel way back on July the 18th, 2017, thats over four years of irregular posts for nothing, for free, and I intend to keep it that way. However, I am, just this once going to put my begging cap on, not for me, but for 'girlfriend'. The thing is, and I do feel feel a little bit cheeky posting this but she and her husband have been desperately trying for a sibling for their six year old daughter for almost as long as I have been writing my blog. Sadly due to blocked fallopian tubes IVF is their only chance, natural conception is out of the question. They have just been through their first round of IVF which has exhausted all of their savings, and sadly failed. But they are desperate to try again, and so they have set up fundraising page. I know that for a great many of us cash is a bit tight right now, but if anyone can help even if it's just a couple of quid I know that they would be would be eternally grateful. If you are in a position to help fund their IVF treatment the link is below...

I'm sorry that this is not my usual drivel, but she and I were talking the other day and she said that her fund raising page isn't seeing a lot of traffic, so I just thought I'd try and help out if I can. Anyhoo, thanks for reading to the end of my post, have a great day. Normal service will be resumed soon.