December 06, 2017 was the last time I owned a Kalkhoff, and that particular one was a Kalkhoff Weltmeister which some little scumbag decided they needed more than me, and so helped themselves to it from my back yard. Since then I've been casually browsing t'internet looking for another one until I bought myself a Steyr-Puch racing bike which I thought would be a good bike to start to build the Kalkhoffs replacement, and pretty quickly I turned it from a neglected early 1970's racing bike into the 'spirit of the Kalkhoff.' About a month ago or so I was thinking that since putting the Steyr-Puch Clubman  together that if I ever did find another Kalkhoff Weltmeister, then I would just buy that, and sell this. However, I really wasn't sure that was the case anymore, I thought that the Puch easily rode as well as the Kalkhoff did, and infact it could even be better, and as I was probably enjoying riding it just as much, perhaps it was time to call off the search for another Kalkhoff. I had been casually browsing fleabay atleast once a week looking for a Kalkhoff, but since finishing the Puch it had been atleast six weeks since I last looked, and knowing my luck I'd probably missed one. The thing was I wasn't really sure I cared about finding myself another  Kalkhoff Weltmeister any more. I had the Steyr-Puch Clubman instead, and it was just epic, and it still is. The trouble is typing the little update on the Puch planted a little seed in my crazy little brain, and as 'girlfriend' was after a bike, and I'd given her one, I figured that maybe it wouldn't hurt to have a quick browse on fleabay, just to y'know, see what was out there. Sadly, not a single Kalkhoff Weltmeister to be found, however there was this... 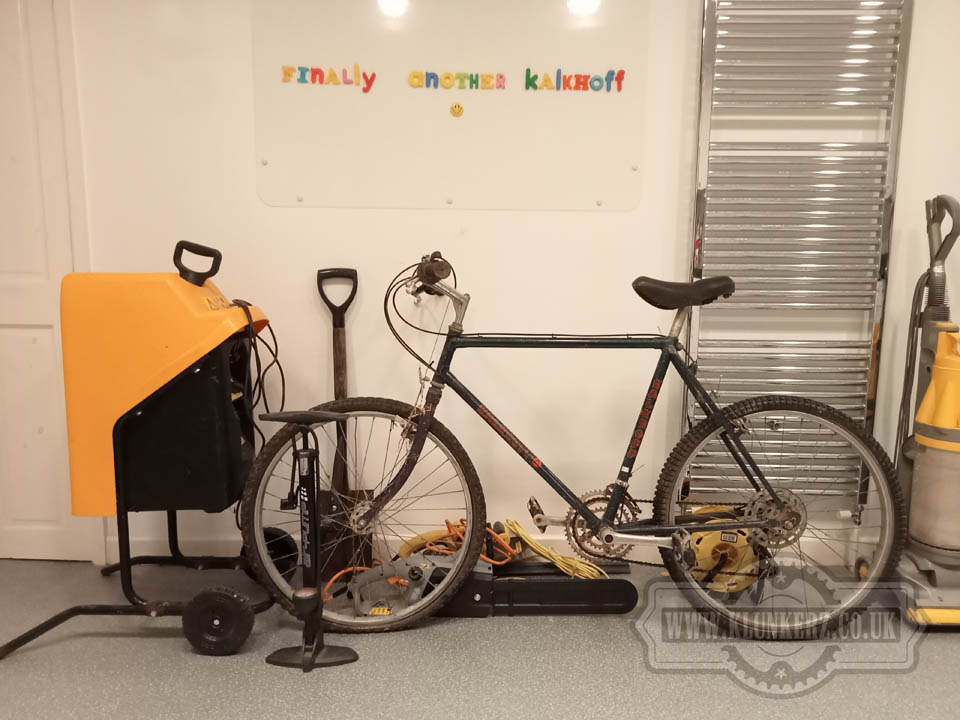 A Kalkhoff... Erm, 'something' mountain bike from I guess the late eighties, or early nineties. If anyone happens to know the model name of the bike please do feel free to let me know, I've been trying to find out for a couple of weeks now through no end of Google-fu, and as yet I've come up with nothing.

Anyway, the trouble was that it was a good 120 miles from BelongaClint in Wales. Still I thought that as I had some work to do at my secret hideouot in Wales coming up I could probably pick it up on the way there, even though it meant adding another 40 miles or so to the journey. I figured that as I wouldn't be going there with her worshipfulness it probably wouldn't matter too much, so I put my bid in, and waited until the auction ended. By some miracle when the auction ended I had won it, for a whole penny! I think this is my first bike that I've bought for just 1p, and frankly I was delighted! I sent the seller a message to arrange collection of it, and genuinely thought that they would get back to me saying they weren't letting it go for that. But a message came back with their address and contact details, so a couple of weeks later I went to Wales and collected it. It was as described, and I was still chuffed to nuts with my purchase, and as I felt it was a little bit cheeky to just give her a penny for her bike I gave her £10 instead, after all I'd have had to have paid that at the very least if I'd got the bike from my local tip. With the Kalkhoff loaded into the back of the Navara I was off to my secret hideout in Wales, and I reckon I was grinning like an idiot all the way there with the thought that I'd finally got myself another Kalkhoff. 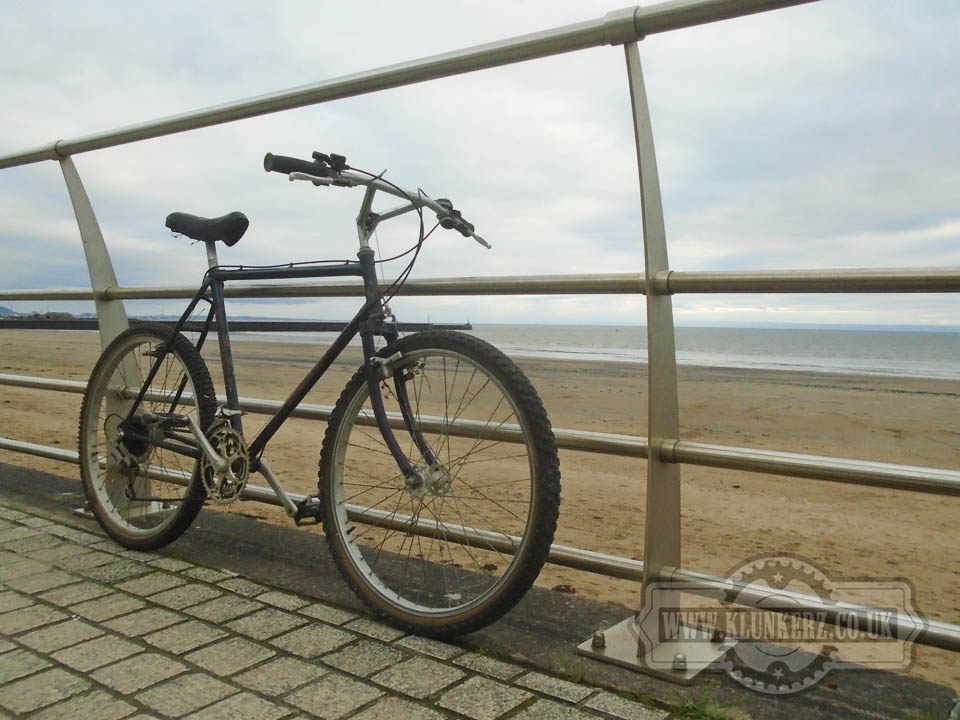 With the bike and tools for the job unloaded into the kitchen of the secret hideout (Mrs Clint wasn't there so I could get away with it!) I sat there for a while just looking at it, it was pretty clear that it hadn't had a good ride for a good few years, but I had an itch to scratch. I gave it a good looking over to make sure everything was tight, gave the parts that should move a squirt of WD-40, installed some new wind into the tyres, and I was ready to roll. 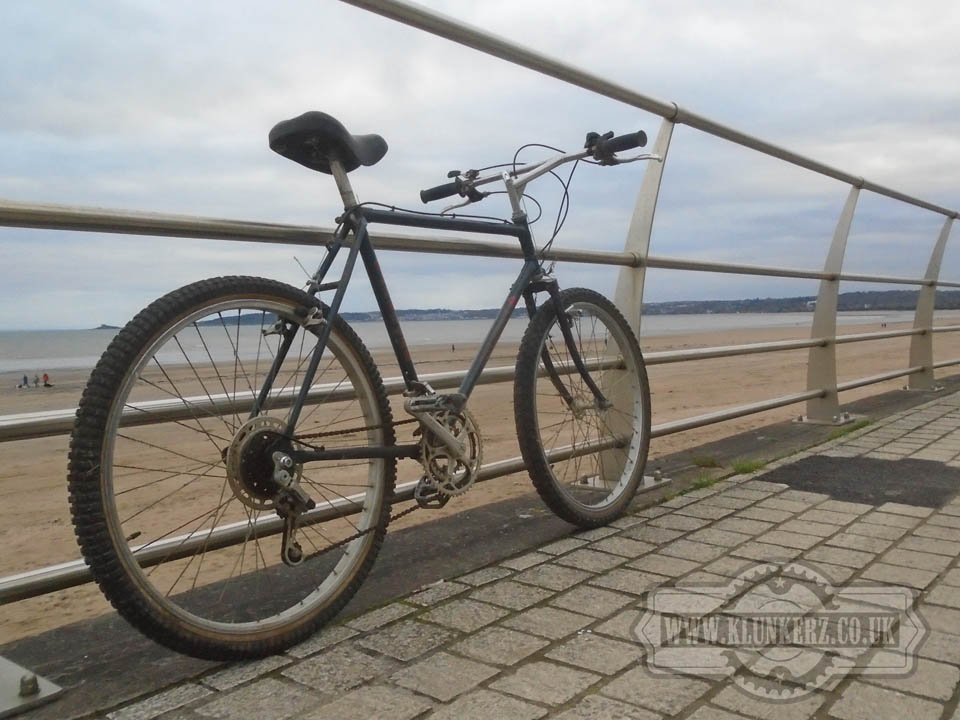 I headed out, the Kalkhoff creaked and groaned a little bit at first as the WD-40 worked it's way into all the moving parts, but pretty soon I was cruising along the beach path, wind, and airbourne particles of sand in my face. As a rule I don't keep a bike at my secret hideout in Wales, so the last time I rode along this beach path must've been 15 years ago or so when I lived there, but even so, despite the developments that have happened along the path, it felt like I'd never been away. It was just great, and reminded me just how much I loved living by the sea, and how much I still really do miss that. 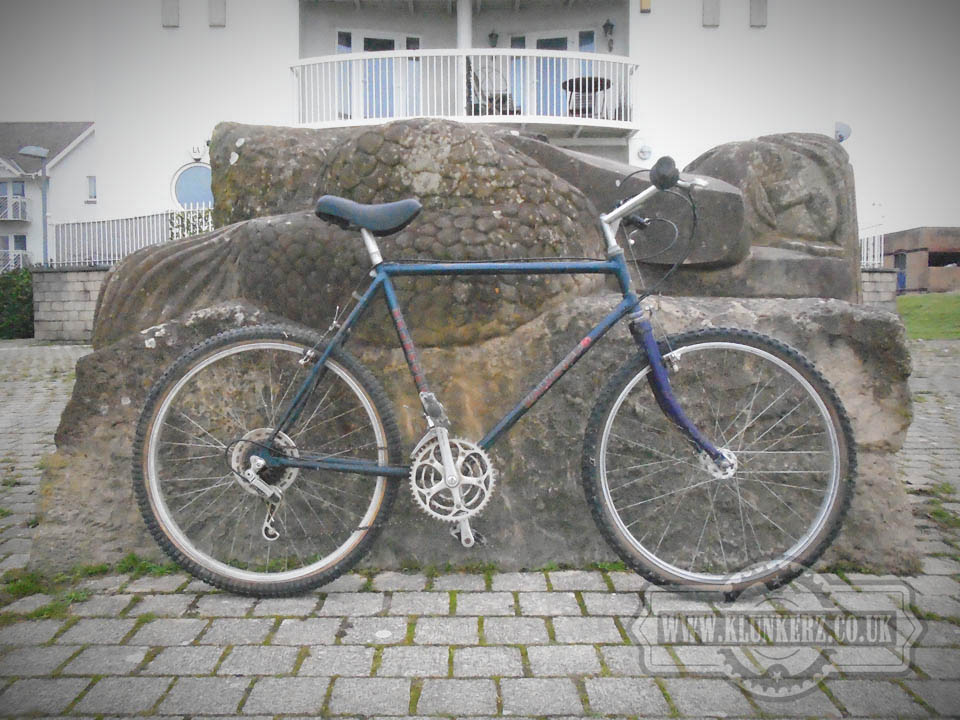 With the first test ride completed I was more than just a little bit happy with my latest bike project purchase, even happier as the tyres managed to stay full of air for the whole ride,and even now, are still hard. So where do we go from here? Well, despite the tyres holding air they are quite old, perished, and the rubber its self is quite hard, so they are scheduled for replacement, as are the grips. Also, despite the copious amount of WD-40 I've squirted on the shifter mechanisms, they don't move, and as they're a mis-matched pair they're getting changed too along with the wires which I feel is more likely to be the problem. Once that is done I shall slowly tinker with it replacing rusty, or worn parts until it's either as good as it can be, or someone steals it from my back yard. Hopefully it'll be the first one, because finally I've got another Kalkhoff under my bum, and I am chuffed to nuts! Lets ride!