Okay folks, to be frank, I've got way too many bikes, the problem is that I see bikes I would like to own, buy them, and then don't sell them again. When I swapped this Huffy Chesapeake back in April I thought to myself that it was OK, atleast it was on par with the Huffy Cherokee that I was toying with selling, so at some point soon I'd probably put this up for grabs. But here we are eight months later and I've still got it, and to be fair, I'm not sure it's going anywhere. 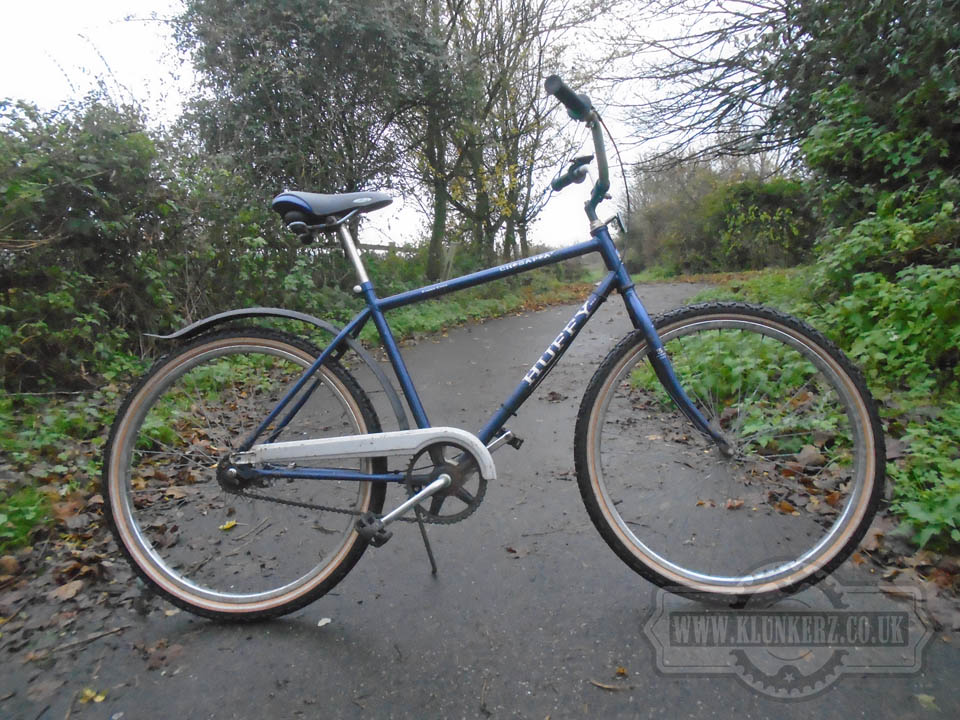 I remember when I got it there were a couple of things I wanted to change. The saddle was one of them as I felt that the next time it rained the cracked foam saddle on it would act like a sponge and soak up water only to let it back out again the minute I rode it. Sure enough that is what happened, and I arrived to meet her worshipfulness in town one day for lunch looking like I'd wet myself. Not only was this not a good look, it wasn't exactly comfy either. I can only imagine what the attractive young waitress thought when she saw me stood there in my beige shorts with a very suspect looking damp patch in my crotch. The grips I changed first of all because I had a pair, and trying to ride with grips that feel like they're doing their best to turn into some sort of handlebar bogey was not the best. 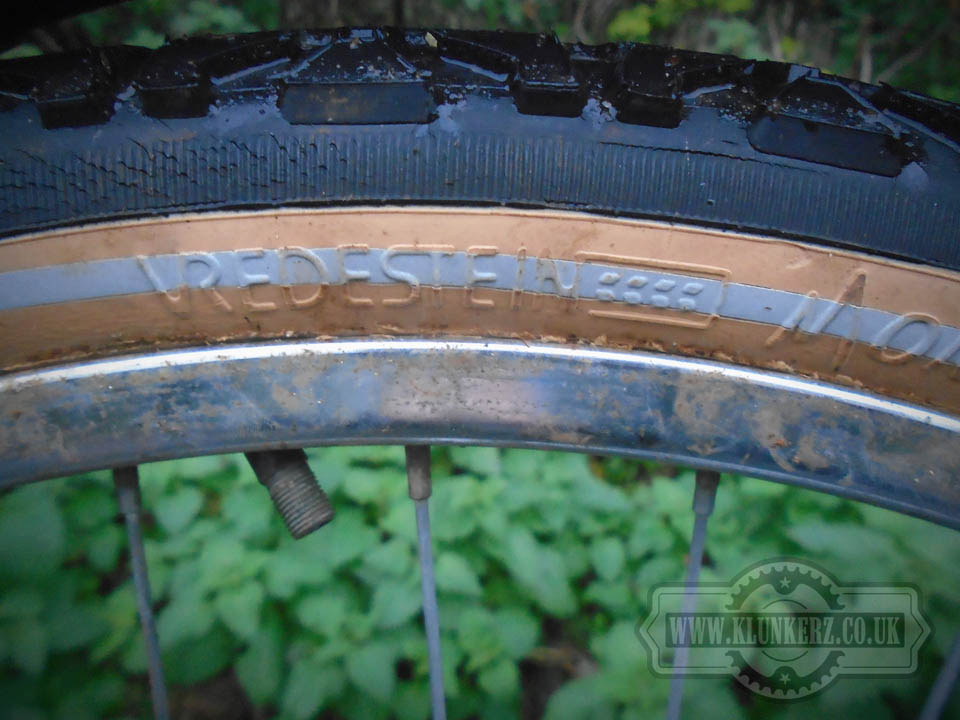 Then there was the tyres, and to be fair I was on the fence a little over whether or not I should change them. The problem was that although the tyres were a little crazed on the sidewalls, they appeared to me as if they were possibly the original tyres that came on the bike. In the end I thought to myself that I'd probably keep them on the Chesapeake until I changed the wheels for something with aluminium rims on it. However as I was dumping my shredded Buddliea at the tip the other day I came across a fella who was just about to lob what looked like a pair of brand new Vredestein tyres into the skip. I stopped him and asked him if I could have them, and he gave them to me. Indeed they do appear to be brand new, but my guess is that they've been hangning in his shed for a very very long time. But I figured they were possibly better than the tyres I was running on the Chesapeake, and so once home I set about popping them on. Having removed the old tyres I think my theory of them being on this since the bike was new is correct, the tyres themselves had stuck to the rims, and the inner tubes were stuck to the tyres. I carefully prized them all apart and it would appear that this bike has never had a puncture! Well, it's my bike now, so thats almost certainly gonna change! But while I was popping the new tyres on I couldn't help feeling that they're not going to last very long, the rubber, although softer than the tyres on the Kalkhoff, is still quite hard, and as I pumped them up they made craking sounds, almost like the sound a crisp packet makes. Still, they were free, and so really what am I losing? 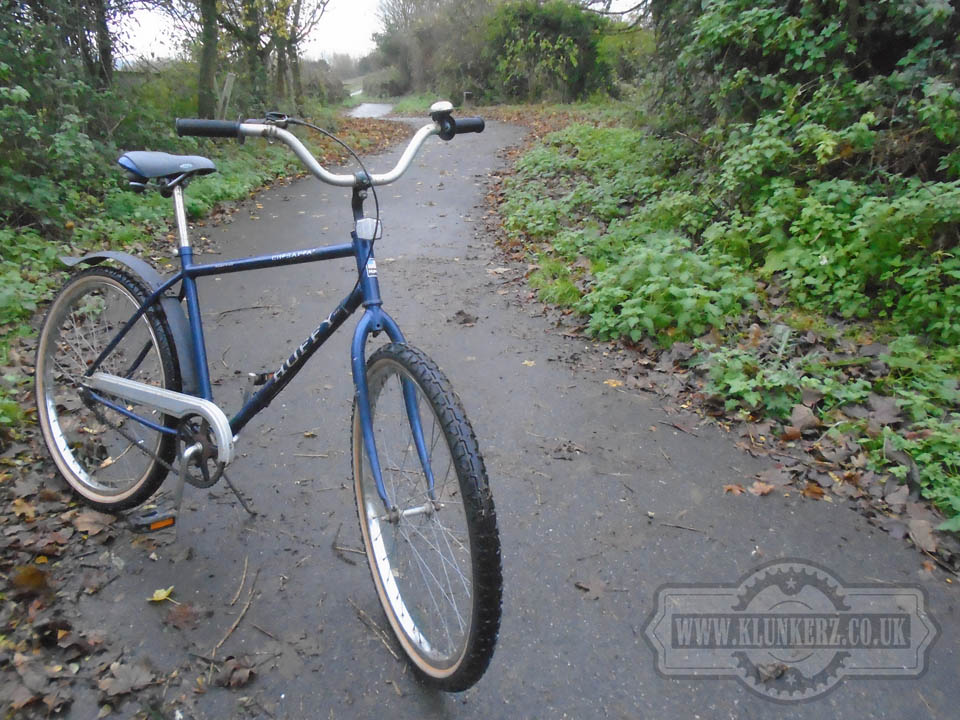 I clipped on a rear mudguard in a bid not to have a brown stripe up my bum, and hit the trail. I wouldn't say that this is exactly a fast bike, although down hill with the wind behind it I think it might be good, however out on the cycleroute the tyres seemed to be quite nice. Despite it being a bit damp under foot, erm, tyre, and the rubber on the tyres being quite hard they seemd to offer more than enough grip for my slow pace. I also quite like how they look, they're a little larger than the standard ones, and despite being knobbly I'm not buzzing along like an old Land Rover.

With my test ride complete I headed back home only to find my Dad stood at my gate looking at my collection of bikes. "how many bikes do you think you've got?" He said. I said I dunno, forty of fifty maybe? "Nope" he said, "106". Hmm, and this doesn't include the ones I've got in my garages, or at work. I really need to have a culling in the new year. I know that I've got quite a few that I've collected for spares, but then I've also got quite a few from buying job lots of bikes because there's one in the lot that I like, so they've got to go. Added to that there's a few of what I call 'my bikes' that I've not ridden in ages because they've been replaced with other bikes, so some of them need to go too. But I can tell you what won't be going, this little Huffy Chesapeake. I think this is going to hang around in my collection for a good while yet.