The X-rated Mesh, what can I tell you about this bike? Well after riding it for the best part of ten months I can tell you that it is extremely heavy. I honestly believe that this thing is probably indistructable. I think that it may well be the heaviest bike I've ever owned, and because it's a single speed I find that when I'm going out for a ride on it, I do a lot of walking while pushing it instead of riding. There are hills in the city where I live that I can ride up on pretty much every bike I've got... Except this one. 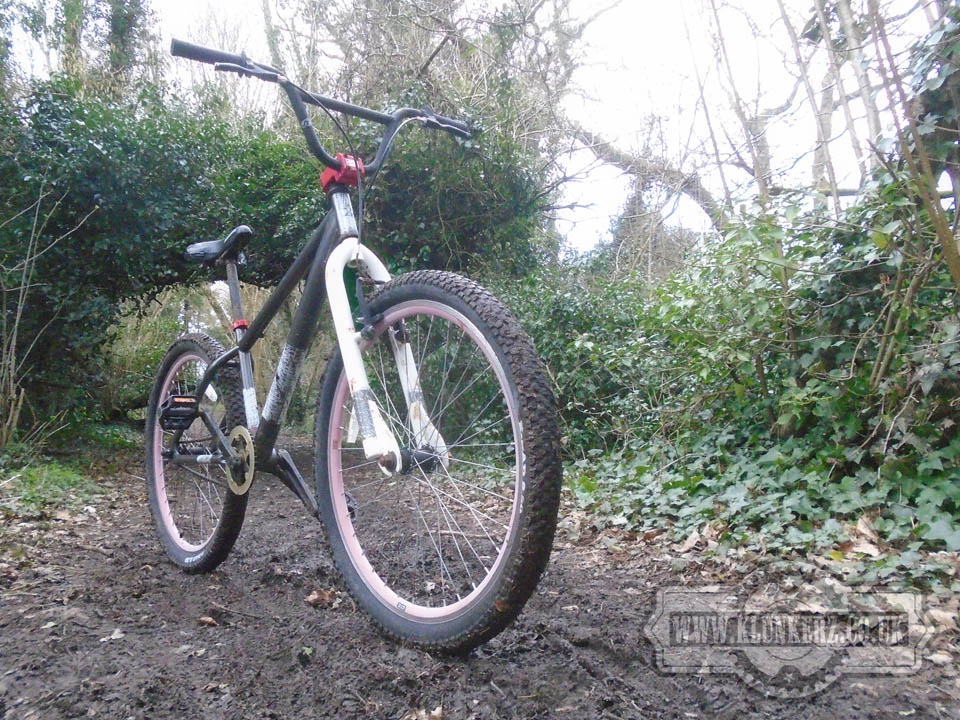 But despite how heavy, and cumbersome this thing is I actually quite like it, infact, I love it. When I ride this bike, and I ride it fairly often, I do feel like I've had to really work for my ride. When I got this thing I found that after about a mile or so my legs were aching, my arms were aching, and everything else was a bit sore. I felt like this bike was abusing me. Normally I can be out on my bike for ages, even all day, but on this, an hour or so was more than enough. But now, after riding it a couple of times a month for the best part of ten months I can manage about a three hour ride, and can now get quite far from home. Yesterday, because I was feeling adventurous I decided to really try and push myself, and go for what would be a three hour, and fairly easy ride on pretty much any of my mountain bikes. I set off at about 10:00hrs and rode across town in the traffic (which I hate) to the other side of town to ride along a gloopy muddy trail. To be honest, I didn't realise just how gloopy and muddy it would be, I must be going mad, because it's pretty muddy even on the best of days in the Summer months, why I thought it would be OK in the middle of February I'll never know. But anyway, from my house to the other side of town is pretty much uphill all the way, so as ever with this bike there was a fair amount of walking while pushing the bike. I think I am getting better, as I am now managing to get further and further up the hills before  jumping off and walking. However, unlike the other bikes I ride, even the single speed ones, with this, I'm pretty soon out of the saddle, and pedalling while standing up. 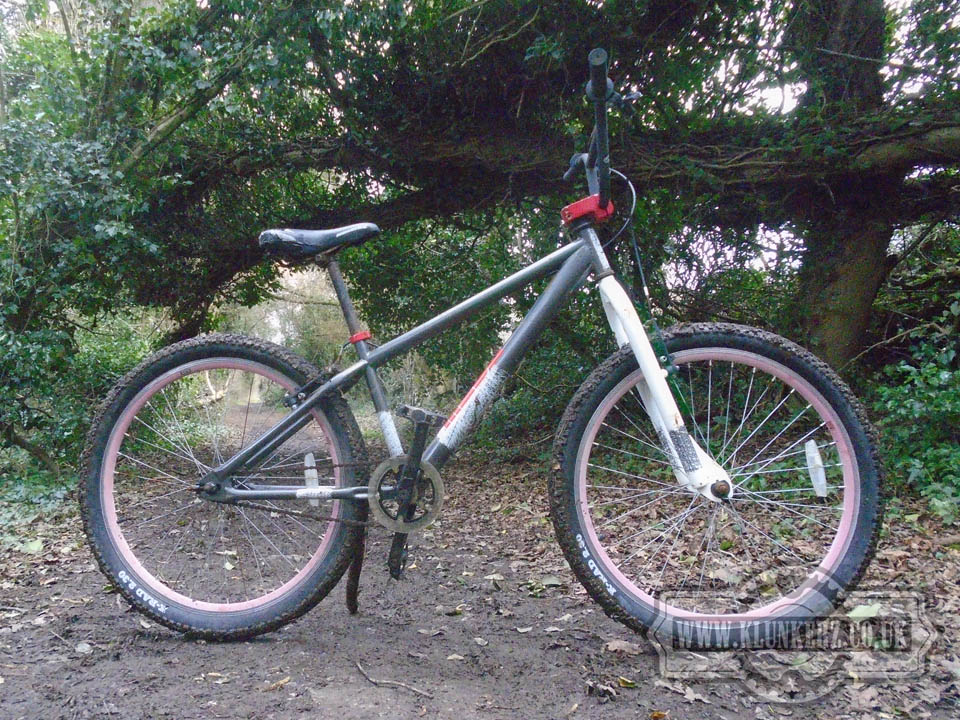 After what seemed to be ages I reached the trail I was hoping to ride along before turning back home. I'm not really sure where this bike is at home, but it's not the road, and not a muddy trail either as pedalling along this relatively flat track was pretty hard going. In places the mud was very thick, and pretty deep, so to keep going meant that really I needed to stand up in order to use all my weight. But what this meant was that the back wheel would spin, and I would be sliding around all over the place. Despite this I did manage to complete my ride along the muddy trail without coming off, or even getting too muddy. Or atleast, until I started to head for home, the long down hills of tarmac, whilst being lovely to coast along it did mean that I was shedding the mud my tyres had picked up, and I was catching most of it on me.

It's odd, because I do find myself wondering, evey time I go out on this thing, how my friends who ride regular sized BMXs all the time do it? I mean several of them only ride BMX bikes, thats it, I see them, middle aged Men and Women scooting about town on their BMXs, and they love it, they won't even entertain the thought of having another bike, for a few of them, it's BMX... Or nothing! Is that hardcore, stubborn, or just plain old stoopid? Time will no doubt tell, but kudos to them. Anyhoo, just over four hours after leaving BelongaClint I was pulling back into my drive, and frankly I was feeling pretty tired, and achy, like I said before, this thing wears me out and leaves me feeling pretty used and abused. So does this mean it's the end of my little BMX type adventure? Umm, NO, I obviously enjoy being punished because despite how this thing leaves me feeling, I flippin' love it! So much so that after being out on it for over four hours when I got home, and her Worshipfulness sent me into town on an errand I could've taken any other bike, but did I? Nope, I took the Mesh, and I even went a way that would involve flights of steps just so that I could ride it down them. It was epic! Well, it probably wasn't if you're a kid who rides BMX type stuff often, but to me, a middle aged fat man in his fifties it felt pretty epic!

So what now? Well, when I got this thing I did speak about changing a few parts and maybe upgrading it a little. I felt that it could do with a longer seatpost, possibly with a layback, and some more BMX looking handlebars. I consulted my stash and dug out some bars, I had a few to choose from, and as good as the ones are that I chose I might well change them again yet. As for the seatpost, well I didn't have anything that would work, and certainly not any layback type posts. So I just kept riding it as-is, and thinking that I really need to change that seatpost every single time I took it out. Only to completely forget about getting one when I got home. So tonight, as I sit here babbling on I have hit fleabay, and bought my first ever layback seatpost. I realise that with the extra length, and the layback posistion this will put a lot more leverage on the seatpost when my luxurious old ass is perched on the saddle. So I splashed out and bought a heavy duty one made of cro-moly instead of what I'd normally buy, a cheap as possible steel one. So with any luck it'll be able to withstand my weight... Fingers crossed! I must admit I am quite concerned that despite it being heavy duty, and cro-moly with my bum perched in the saddle it may well still be beyond its safe working load as it'll probably be at it's fullest extension in the Mesh's frame. To be honest I'm still a bit concerned that I might bend the seatpost. I wonder if it might be worth actually welding a length of gas pipe inside the seatpost to add a little strength. I know this will also add weight, but this thing is so heavy already I'm not sure I'll notice it.

Lastly, I think that at some point I might like to try out my skills with an aerosol can or two and give it a lick of paint. I'm not sure I just want a single colour either, infact, I know I don't. Going back to when I was a kid, and missing out on the whole BMX thing, my Dad wouldn't let me paint my Raleigh Chopper, as it would be worth something someday if it was left as it left the factory. (My dad took that immaculate Chopper to the tip when it got too small for me) But anyway, my friend had a Grifter, and I'm not sure if his Dad was the Banksy of the eighties, but in their garage was a spectacular selection of aerosol paints. my friends Dad painted the Grifter, and pretty much used every colour he had atleast once. It looked pretty damn funky, and to be fair, I wanted to do the same thing to my Chopper, but wasn't allowed. So that's probably going to be the look I'll be eventually going for on this Mesh (If my Dad lets me

) I've got a pretty big selection of aerosol paints myself now. Hopefully it'll turn out as cool as my minds eye still sees my friends Grifter, and when the warmer (less windy) weather arrives perhaps we shall see. Until then, let's ride!