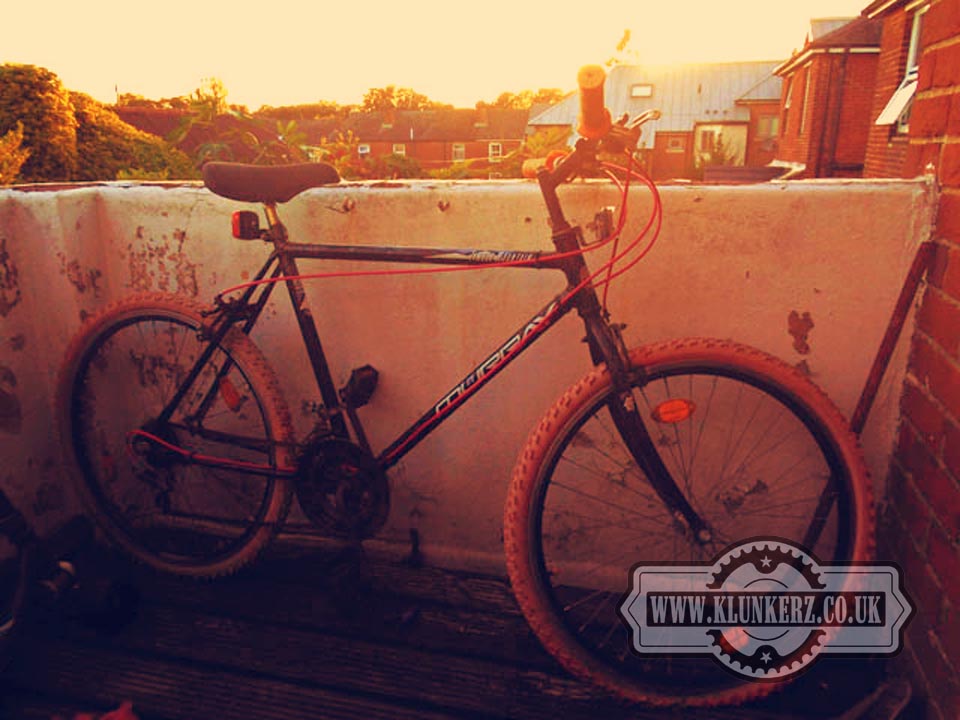 A Murray Timber Mountain! I've had this bike for a long time now after rescuing it from a skip. I had even started fixing it up, but then lost interest and left it on the balcony of BelongaClint to deteriorate further! It's very VERY similar bike to the Magne Fugitve, infact I wouldn't be surprised if they were made in the same factory. So after riding the Fugitive around for a month or so I have decided to build this Murray MTB in a similar road going style. The Timber Mountian is kind of a project so lets have a look at it. 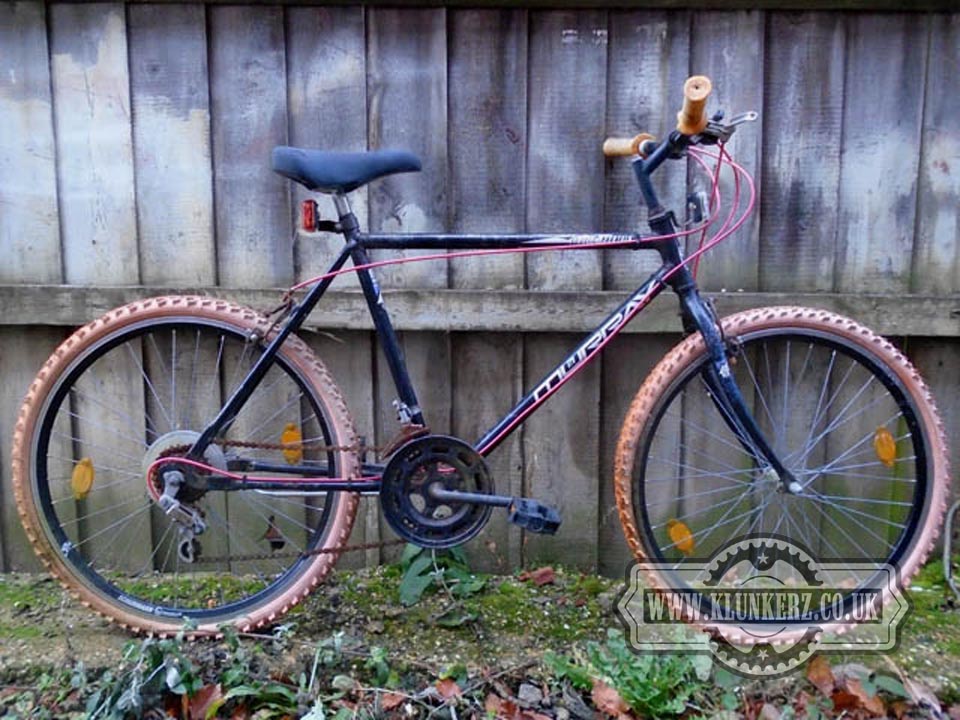 This is easily as bad a bike as the Magna Fugitive was, however like the Magna I picked it up because I thought that nobody else would want it, and I couldn't let it just go in the skip. I really believe that they were probably made alongside one another in a factory in Taiwan despite having a sticker on it that said 'Proudly Made In The U.S.A.' When I picked it up originally the wheels were rusty, and the tyres were ruined so I put on another set of wheels and new Orange tyres. 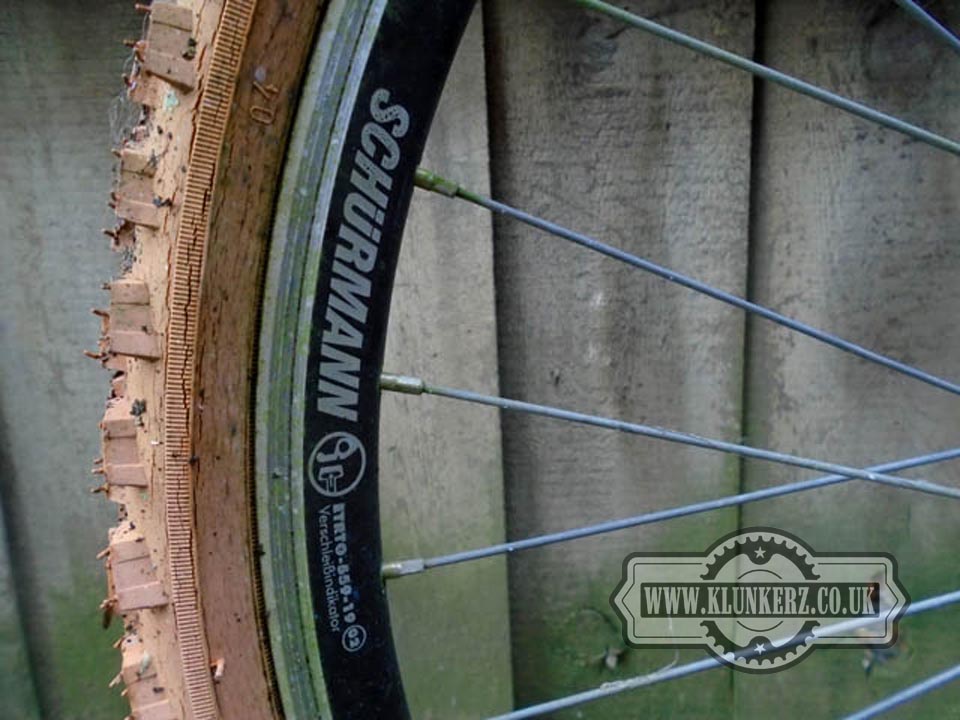 I also added new Orange grips and some Shimano Brake lever/Shifters that I had in my spares box. 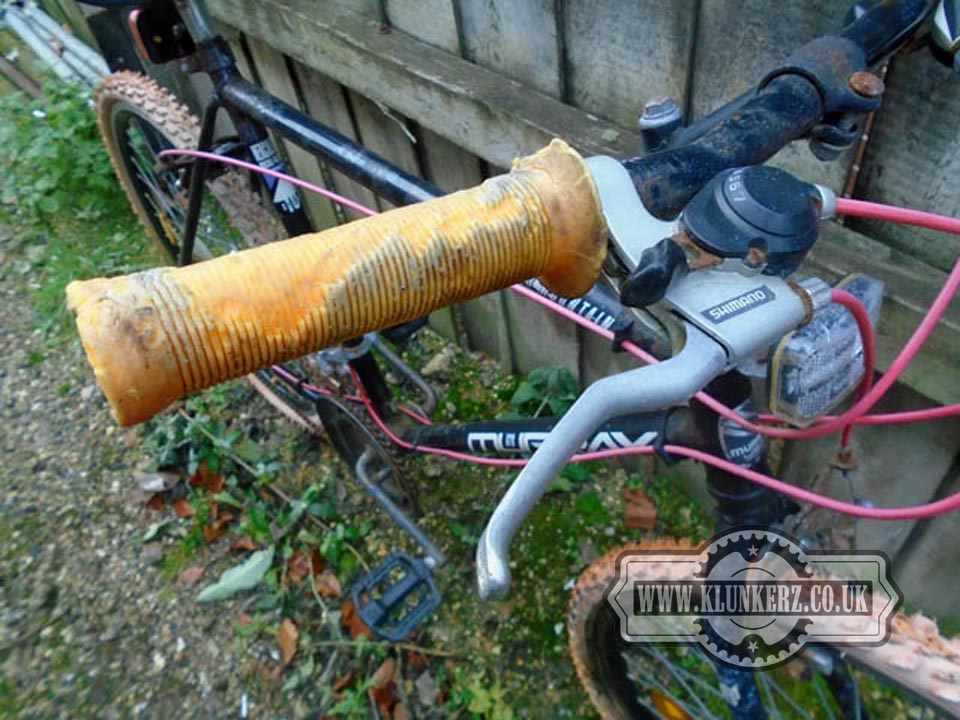 I got it all working, then never rode it. It's just been sitting on my balcony for five years! So, the tyres went flat, and perished, and the grips have turned into a gooey rubbery mess that just falls apart whenever you touch them! So, what shall I do with it now? Well, it really needs completely doing again, and with my enthusiasm renewed by the Magna, I've decided to get this back on the road again and ride it! 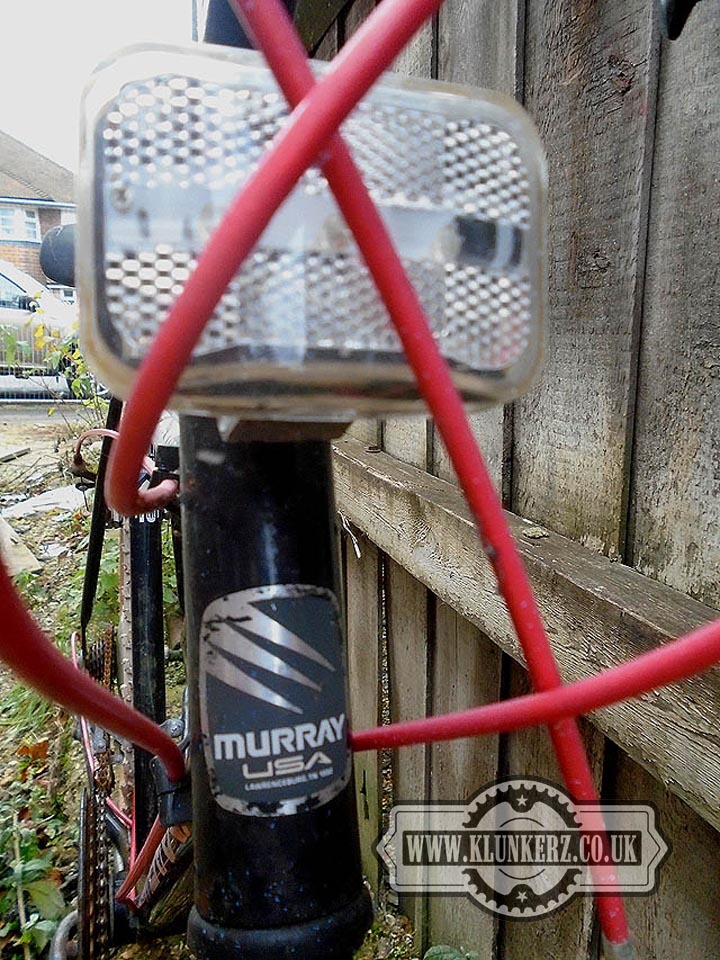 Make no mistake the Magna wasn't a particularly good bike when I got it, and it probably wasn't a very good bike when it was new, but after I'd fettled it a bit I had got it to the point where I really enjoyed riding it, so I'll take what I learned from the Magna, and use it on the Murray, and build another crap bike that's  hopefully good to ride! I had some bits kicking about and I figured they would be better on a bike, than in the shed! So without further ado, some pictures! 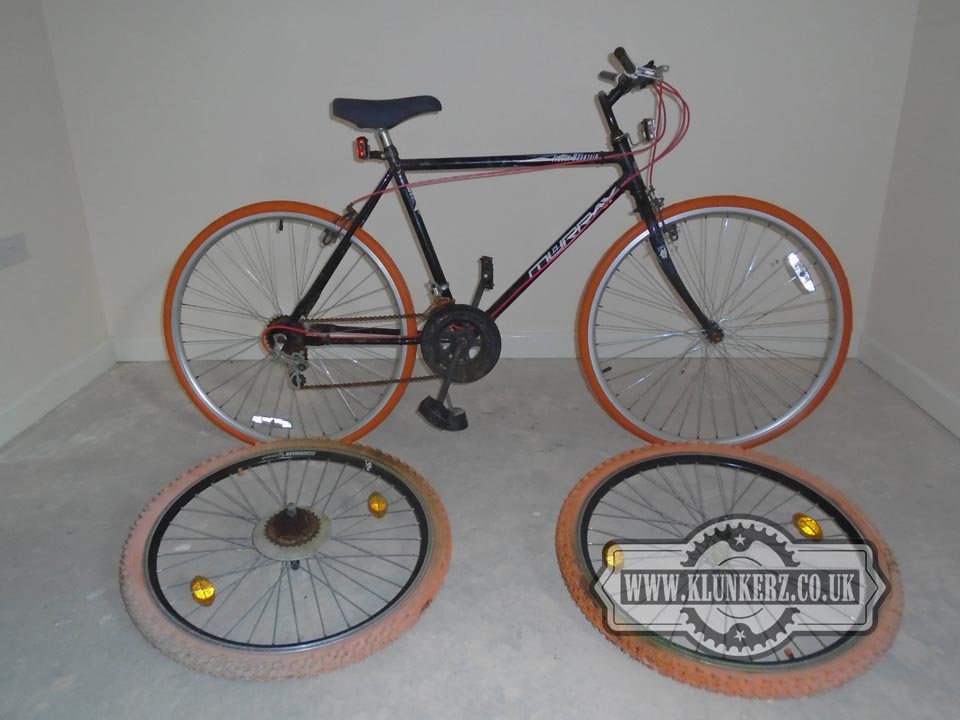 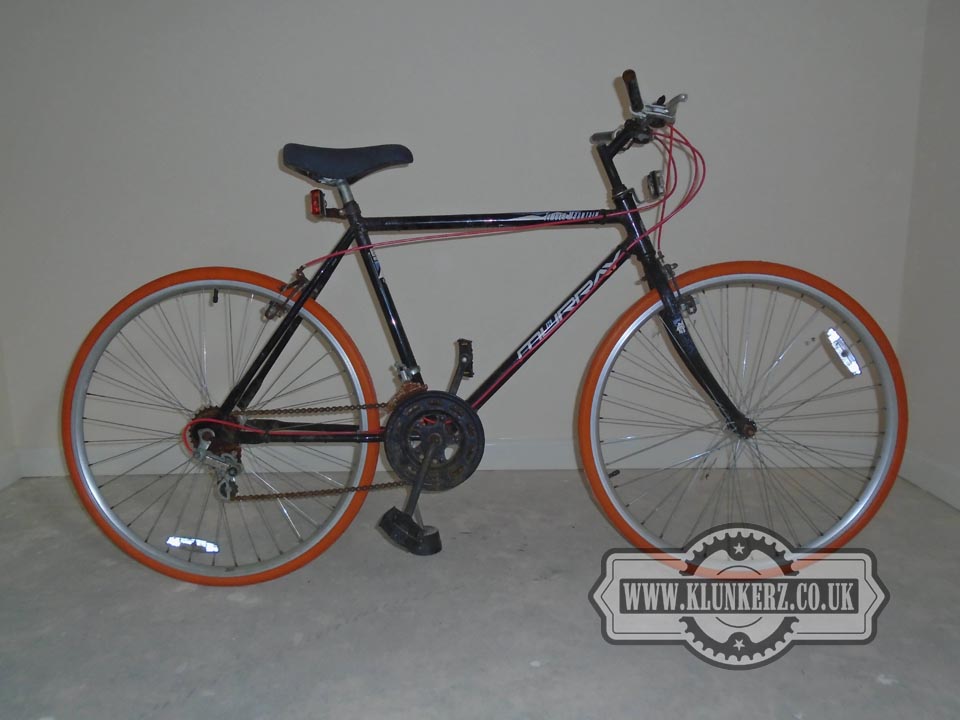 As no doubt you can see I have removed the 26" wheels with faded orange tyres on them, and replaced them with 700c wheels, also with orange tyres! Personally I think it looks all the better for it! 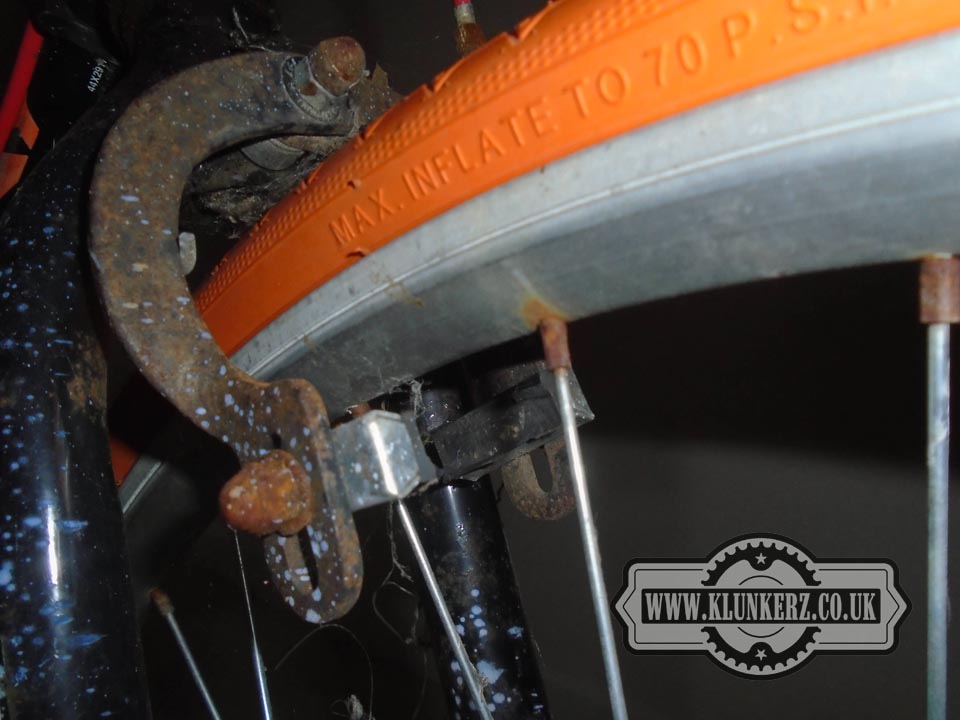 Hmm, those brakes are probably going to feel a bit notchy though, if they stop me at all! The thing is, this looks fantastic in my opinion, the larger 700C wheels and orange tyres suit the bike completely, but, I've rummaged through my stash, I've rummaged through friends stash, and I can't find any brakes that will work with the 700c wheels, and a frame designed for 26" wheels. Therefore I have admitted defeat, and dug out a pair of 26" wheels and tyres from my stash, and bolted them to it instead. 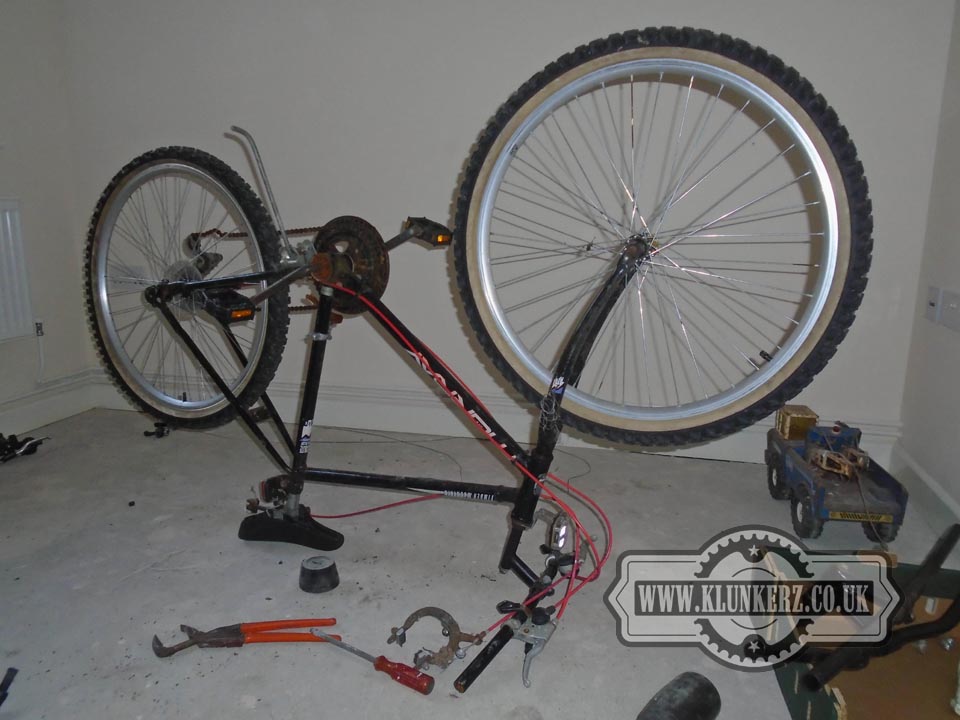 I know, and I agree, I've let myself down badly there, and like my school reports always said, "Could do better, must try harder!" But the fact is that once it is finished, it won't be worth anything to anyone, and I'll probably try to sell it because I've just got no room to store them all. Therefore the plan is to build it up, make it rideable, then sell it. It's pretty solid, and very similar to the Magna Fugitive so I reckon it will give a similar ride, and I'm actually looking forward to riding it. However I still have a few jobs to do, mainly make the brakes and gears work as all of the wires have corroded in the outter cables and nothing moves sadly. I think I have some used brake and gear cables in my stash so I'll put them on, although unfortunately this means that the cables won't be red like they are now, and were originally. I'll probably put some new calipers on it too if I can find some as the ones on it are really rusty.