September 21, 2017
A good long time ago I managed to buy myself an old Raleigh Mustang frame. The plan was to just start building it back up inot a rideable bicycle. So I've dug it out for a better look. 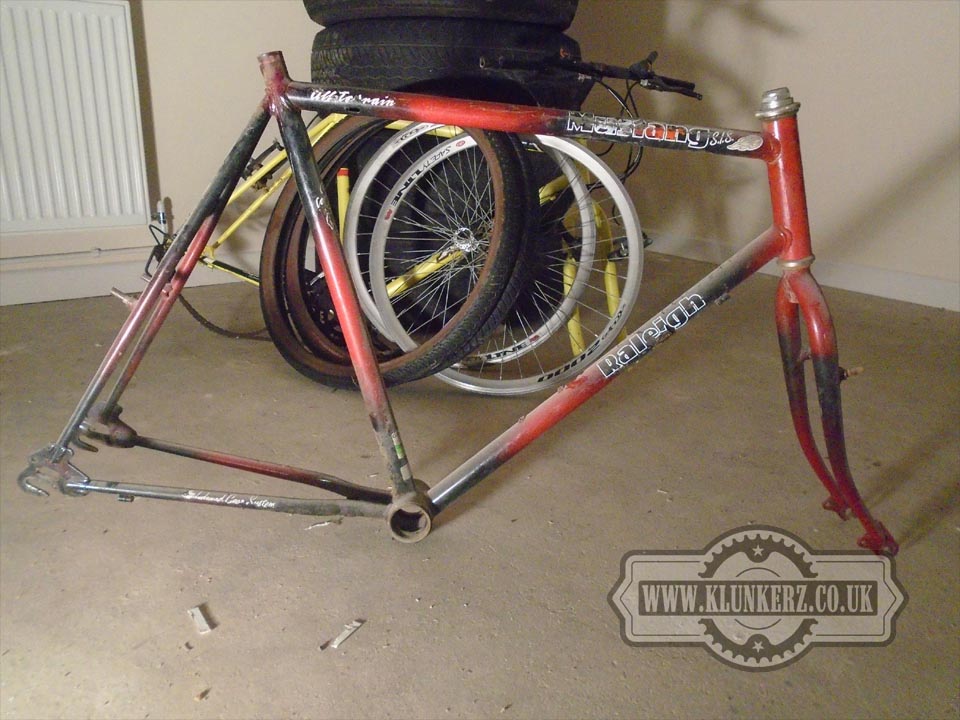 I'm not really planning to do a resto on this, I just want to bolt it together, and ride it. I like that it's un-resotored, you only get that patina once! Besides if I restore it then I'm into buying new parts as just bolting old parts back onto it will make them look tired. But, as no doubt you've noticed it is painted maroon and black, which I think looks quite good, and is definately in keeping with the age and style of the bike. But for a long time I have been thinking about painting it white with a rattle can, and then painting it blue where it is currently painted black, if this make sense? So just white where its red, and blue where it's black. Of course should I go for the white and blue paintjob I will then need a set of Raleigh Mustang decals to finish the look off. I wonder where I could find new old stock Raleigh Mustang decals? 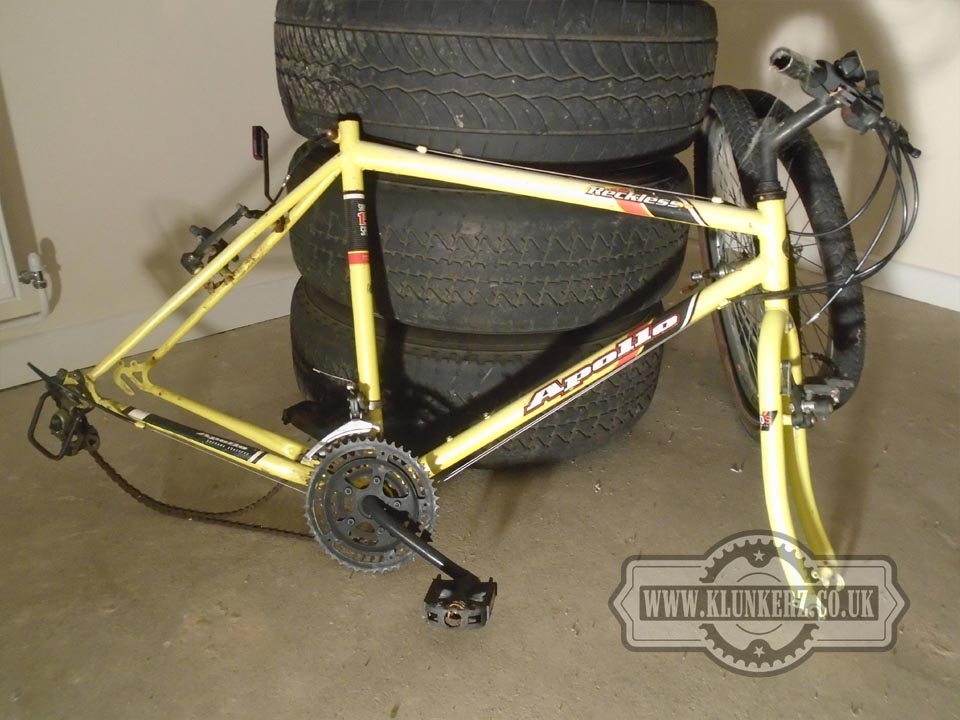 Now some weeks back the cylcing gods descended on my workplace and showered me with gifts, the above Apollo Reckless frame being one of them. This I have decided will donate a great many of its parts to the Raleigh Mustang project. So I've dug through my spares bin and soon had a pair of wheels and tyres for it too, and before long sitting infront of me was this sight... 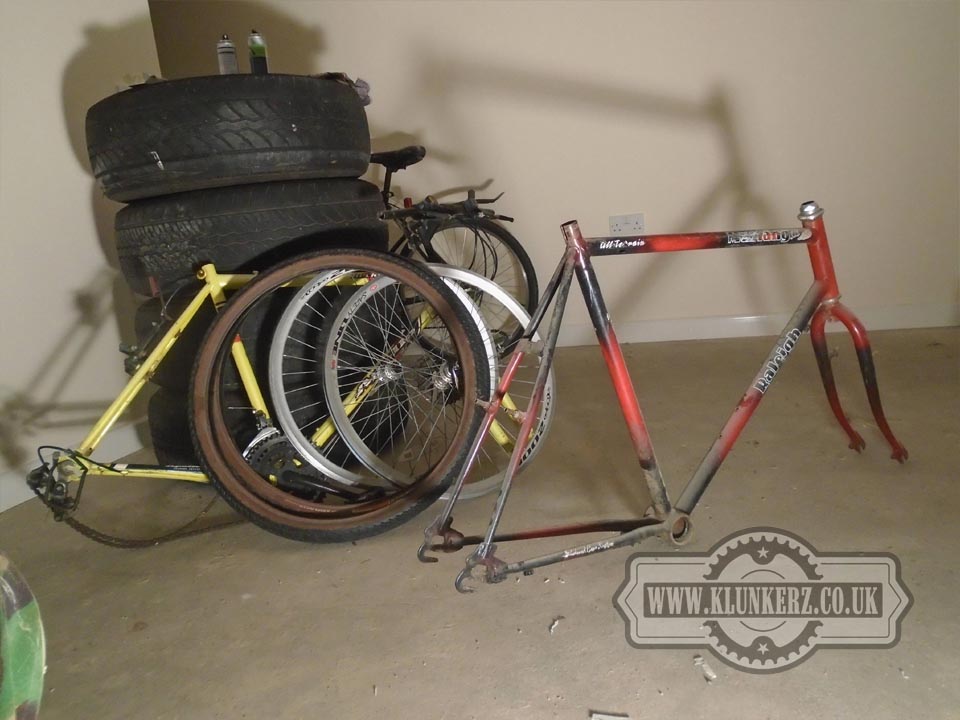 One 23" Raleigh Mustang frame, one 21" Apollo Reckless frame with acillaries, one rear Rigida rear wheel with 8 cogs (so it looks like this will have 24 gears when it's done, I'll still probably only use 3 though!) one Rigida front wheel, one pair of tyres, and no innner tubes, great! Still, a good start never the less. I sat for a bit looking at it all, and wondering if I have completely lost the plot by stripping one bike frame down to build another, talk about robbing Peter to pay Paul! But the thing is the Apollo Reckless even if it was built into a complete and rideable mountain bike probably wouldn't be worth anything. Niether for that matter will the Raleigh Mustang. But the difference is that I want a Raleigh Mustang in my collection, so that was that decision made! The next thing I knew I was looking at this. 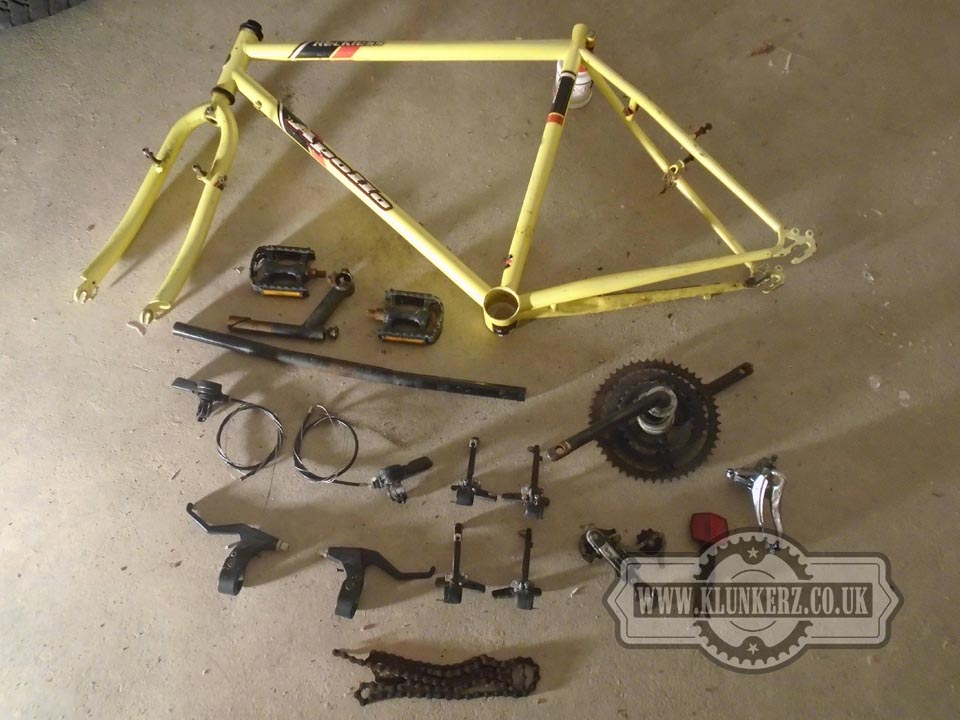 One stripped Apollo Reckless frame! Good! The thing is, the reality of stripping the Reckless is that I will probably only use the crank on the Mustang as this will give me a three speed single piece crank, which I need. The rest of the parts are quite low budget, and they will probably get swapped onto other bikes that will donate their better quality parts to the Mustang therefore hopefully giving me a bike that rides like the Raleigh Euro, and Massif that I have in my collection which both feel like they're built from quality parts! I know, I know, I should probably just keep the Raleigh Massif, or the Raleigh Euro and ride one of those instead of faffing around with the Mustang. But let's face it, if I did that, what would I write about then? 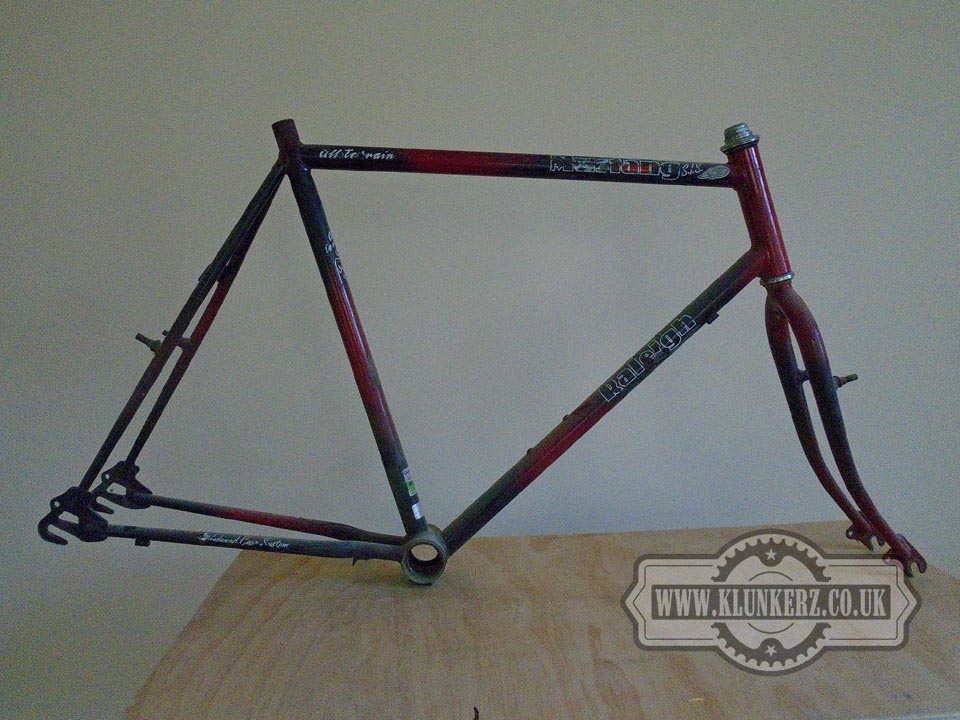 Anyhoo, I think I've made my mind up as to the direction this restoration should take, and that is that I should it leave it as it is, and not paint it white and blue? Ofcourse by tomorrow I will have probably re-thought the whole thing, so anything could happen! What I do know is that I will not be rushing this build because I want it to be just right, and that will mean sourcing the correct parts, or atleast, that correct parts as far as I'm concerend. Updates as they occur!