October 19, 2017
After a fair amount of more swearing, and abusing the seatpost with my stilsons today I figured that this was getting me nowhere, and I needed to consult the wisdom of the internet as I had no idea how I was ever going to get this damn thing out. The internet gave me several options, such as getting it drilled out, or using a hacksaw blade to cut a slot in it and then fold it in on itself. But then there was this other option, probably the most dangerous one of all, and that was to mix up some caustic soda solution, and try to dissolve the seatpot out, without dissolving myself in the process. After a little thought I figured that I might as well give it that a go. 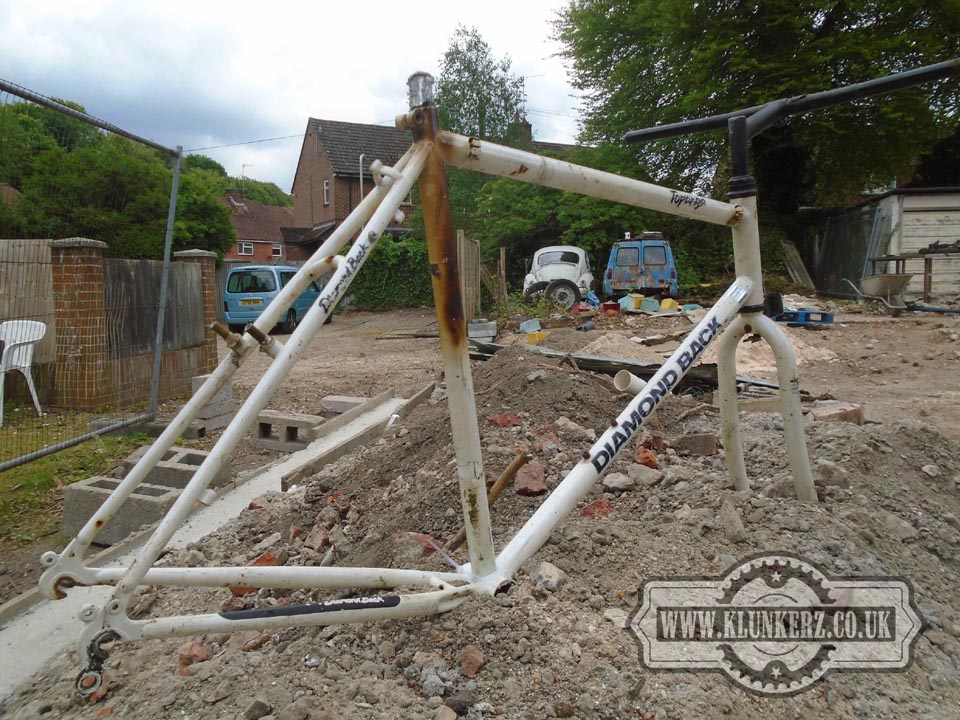 Now, before I go on I DO NOT recommend that you try this. Caustic Soda is some pretty nasty stuff, and not really to be played with!! So, now thats the warning out of the way... I started to strip the frame, and much like the seatpost, it wasn't going to be easy, and put up quite a fight. In the end, after struggling and swearing for most of the morning trying to get the crank out, I relented, and took it to the very nice young fella in Halfords. Who I might add also struggled to remove it, but it has to be said that having the correct tools, and the knowledge on how to use them put him in with a better chance than me, and after a little while it was out. Next stop, Homebase. It has to be said that there's no place like Homebase, and before long I was stood infront of a shelf featuring loads of very nasty chemicals. I picked up the heavy duty, high concentrate, extra strong caustic soda, and headed for the till. Once back at BelongaClint I decided to watch a tutorial on youtube about how I should go about dissolving this seatpost without causing myself any damage. I was fairly sure I knew what to do... Step 1. mix caustic soda into water. Step 2. pour mix into seat tube. Step 3. stand well back and wait! But I wanted to see what the reaction was going to be like so that I knew what to expect when I did it. Before too long I was sitting there, watching a ginger man dissolving a seatpost... This one. 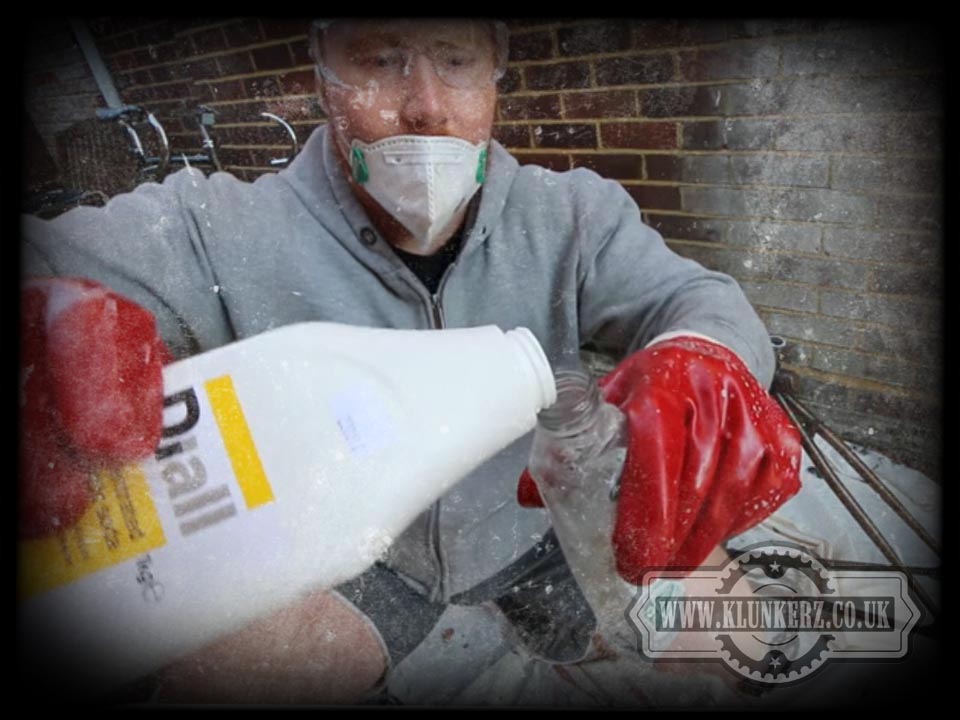 Now the thing that struck me about this whole video is the lengths that the Ginger man had gone to in order to protect himself from something that is, lets be honest, pretty nasty stuff! Gloves, check, Goggles, check, Mask, check! Wait a minute, mask? What flamin' good is it doing him wearing it like that? Ginger man if you are out there reading my words of mindless babble, next time you're doing something like this you might want to wear the mask so it covers your nose also. As, like your mouth, you breathe through that too! Anyway video watched and I headed off to try it for myself! 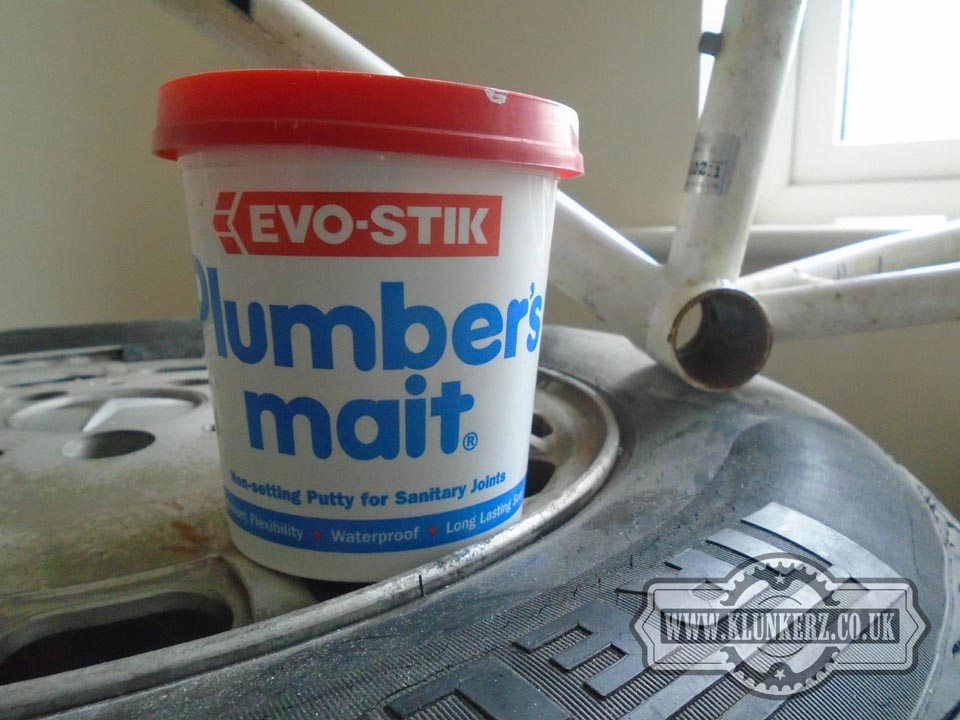 So then, out with the Plumbers Mait to plug the hole at the bottom of the seat tube, and then, outside to stand the thing in the dirt. 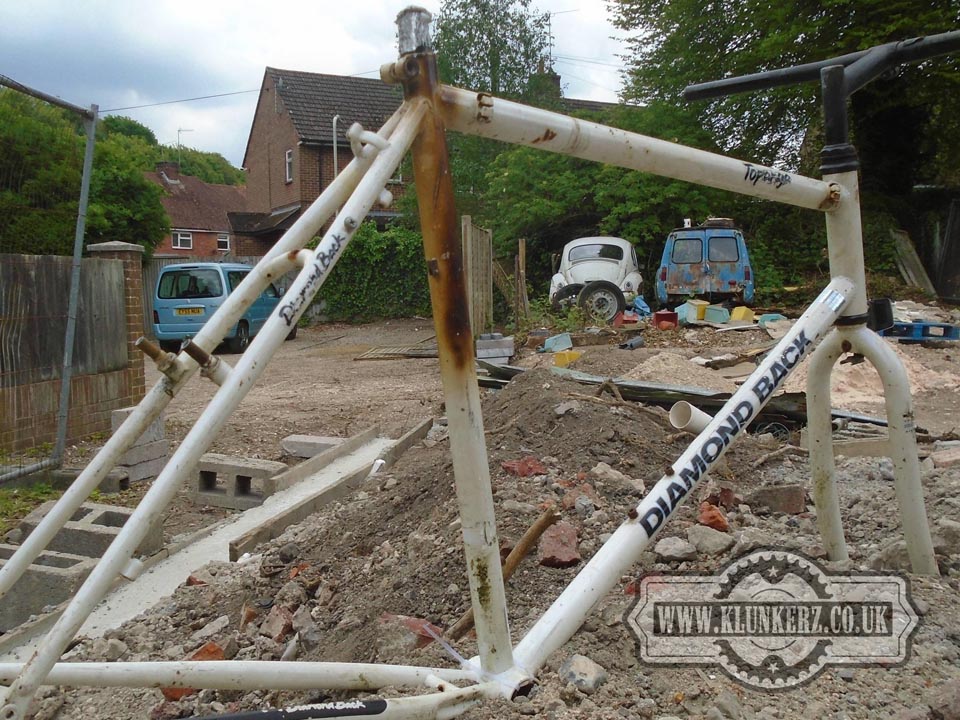 Right then, bike firmly held by the soft dirt around the bottom of the frame. Let's mix up the caustic soda. I read the instructions for using the caustic soda, and it suggested for most things the ratio you were looking for is one cap full for five litres of water. However this was mostly for cleaning, and unblocking the drain, nowhere on the packet did it give a ratio for dissolving aluminium seatposts out of a steel frame! I decided that I'd probably need it a bit stronger. I put on my safety goggles, and then put about 300ml of water into a jam jar, followed by five cap fulls of caustic soda! I can't stress this enough, you need to add the caustic soda to the water, and not, NOT the water to the caustic soda! I gave it stir with a stick. By the time I picked up the jam jar that stuff was hot, really hot, and steaming! 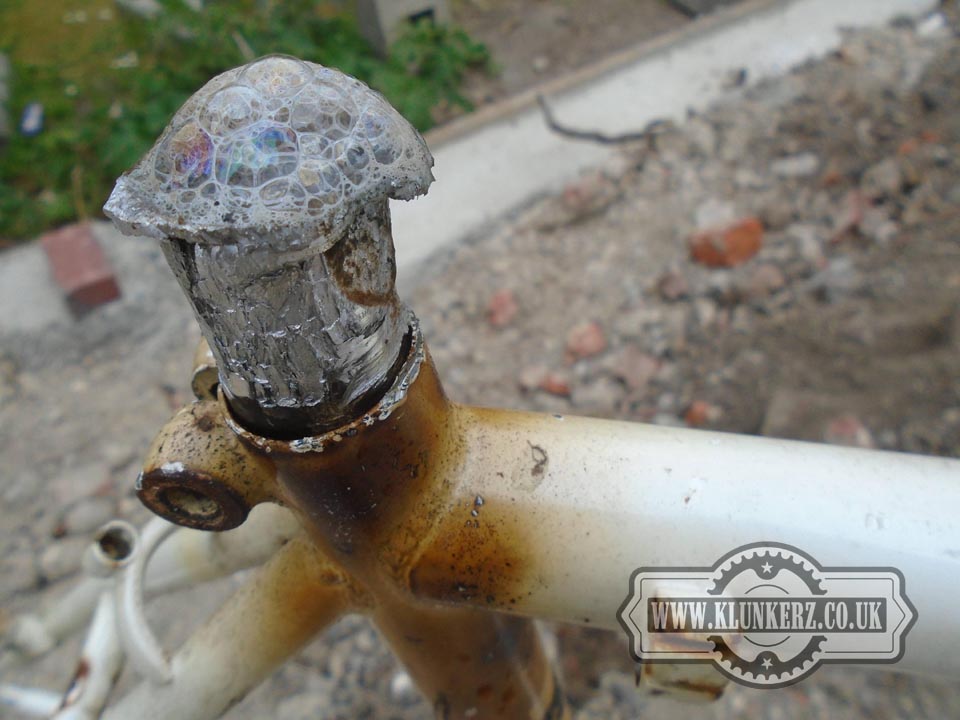 I left it to do it's thing for the afternoon. Later this afternoon I figured that I'd return to my frame to see how it was going. 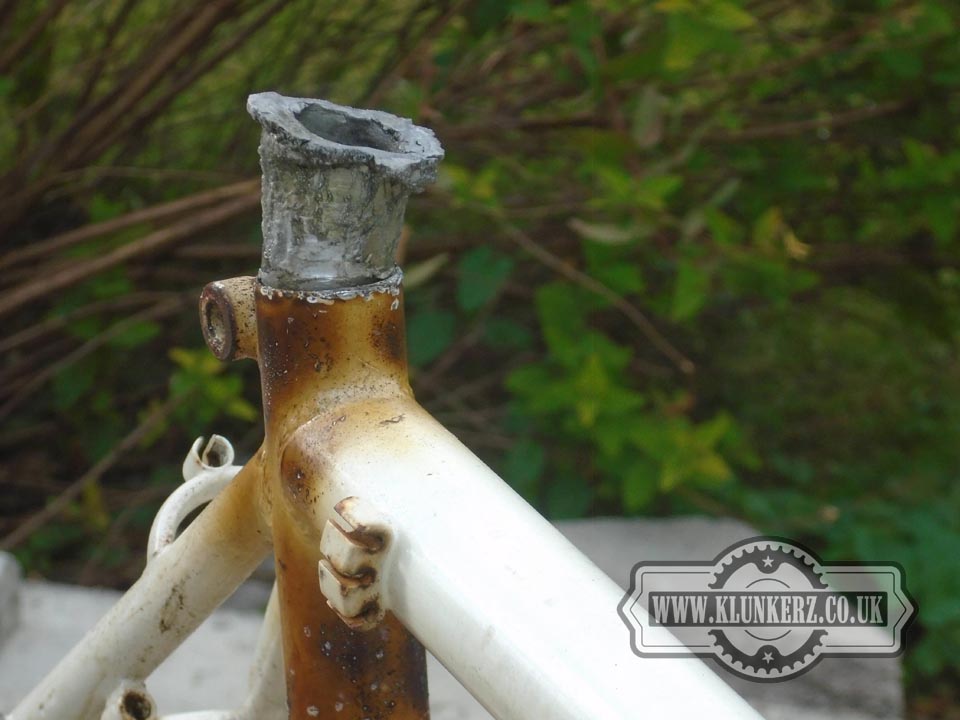 For the most part the bubbling and fizzing had stopped, and the level was quite low, and the seat post was looking, if nothing else, quite clean! I decided to empty out what was left in there, and put in a fresh batch. What came out was a dark grey liquid, which I'm guessing was caused by the particles of aluminium suspended in the caustic soda mix. I put on my googles, and mixed up a fresh batch. In it went... This time the fizzing was much louder, you could actually hear it fizzing from about fifteen feet away! Also... 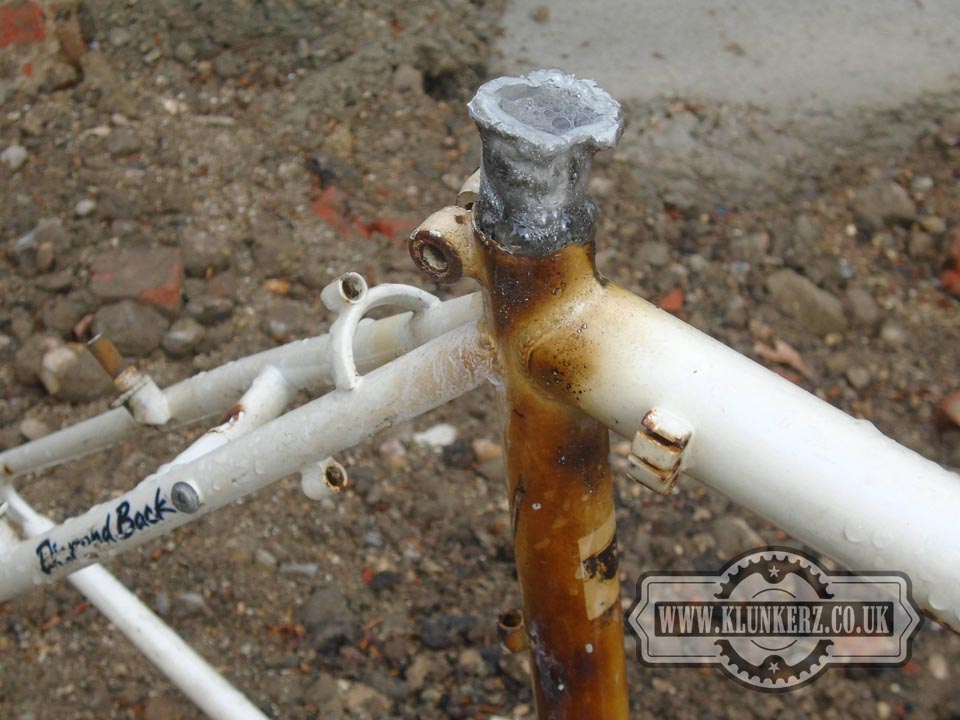 Unlike the first time when it just quietly bubbled away this time, like Cresta soda in the seventies, it's frothy man! It bubbled over in a grey froth that ran down the seat tube removing some of the paint as it did so! I watched it erupting for about an hour until it grew too bored off the bubbling to watch any more, but even as I left I could still here it fizzing away! come tomorrow I wonder how much, if any, of the seatpost will be left at all! As a matter of fact, the way it was frothing, and fizzing away I wonder if there will be any of the frame left at all! 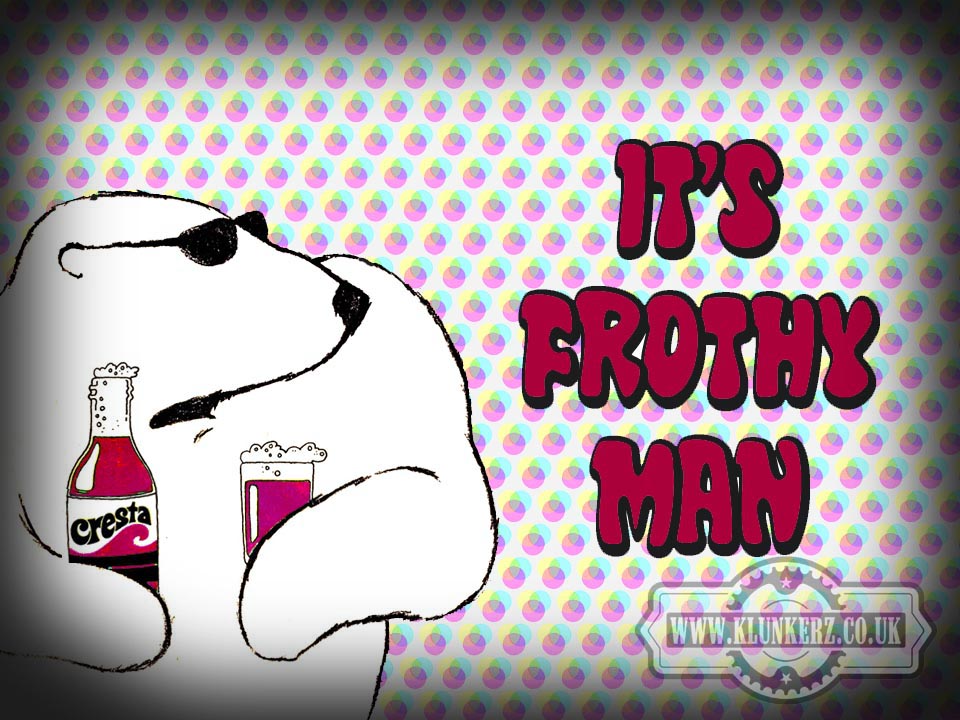