October 24, 2017
For a little while now I've been thinking about this thing of beauty... 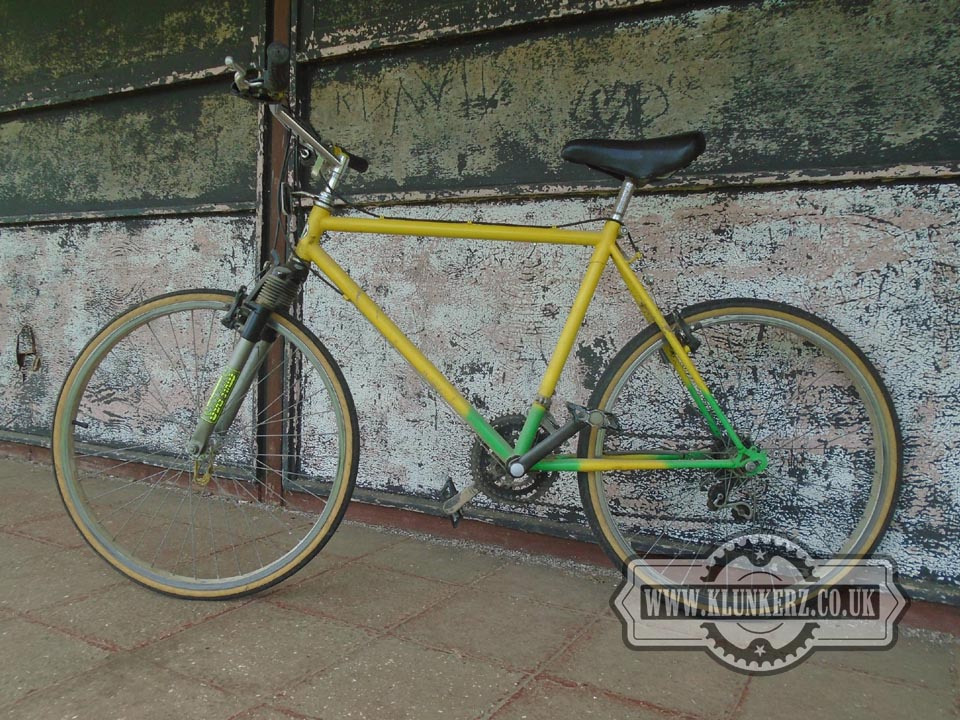 I know what your thinking, you're probably wondering why we are looking at this thing for! Well, to put it quite simply, I've had it a long time, about 32 years I think! It was the first bike I ever bought brand new. I worked all through the summer holidays when I was at school, and saved as much as possible in order to buy this bike for myself! This bike has never spent a night under the stars! When I'm not out riding it, it lives inside the house, and always has done! 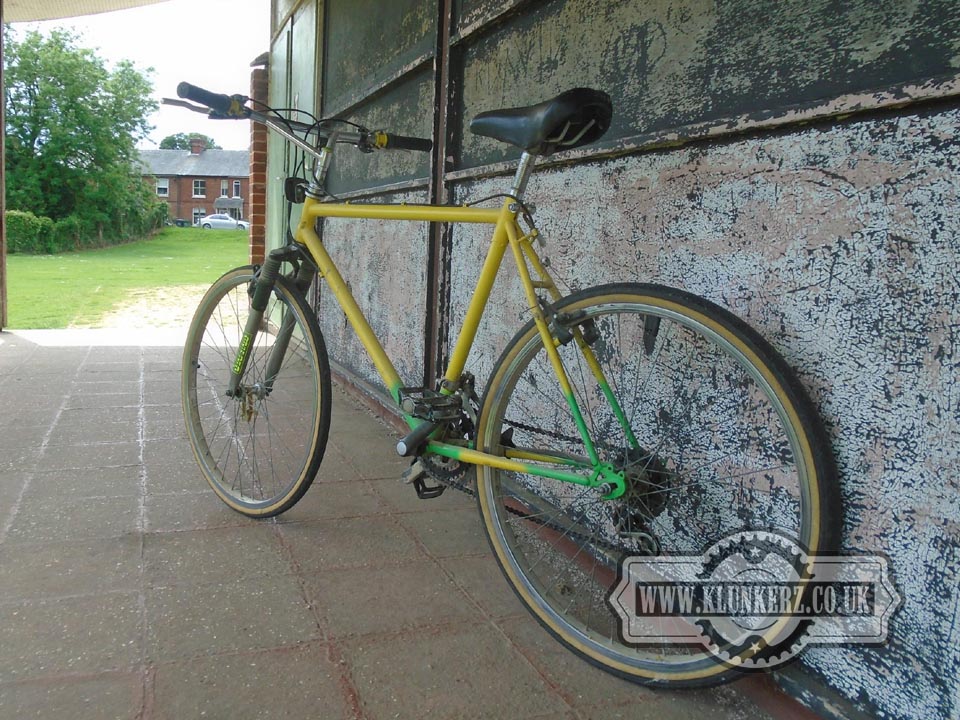 So what is it? Well it started off as a Puch Mountain Cougar, and its had the odd modification or two! Firstly, the paint is the effort of a 17 year old with aerosols! Probably not the first effort I made, but it was one of my early paint jobs. It was originally silver, and after about a year of ownership I decided that I might like it if it was yellow and green instead! 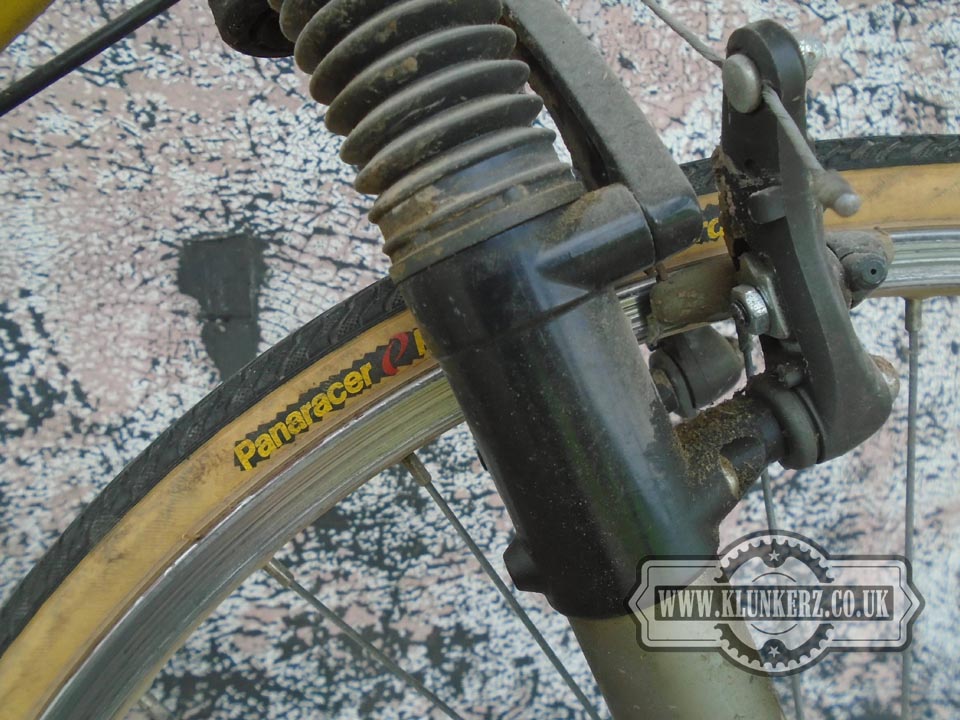 The front suspension, it was originally ridged like most bikes were at the time. This is the result of the following years summer holidays efforts, and as I remember the front forks were a bit more than the whole bike cost me in the first place! 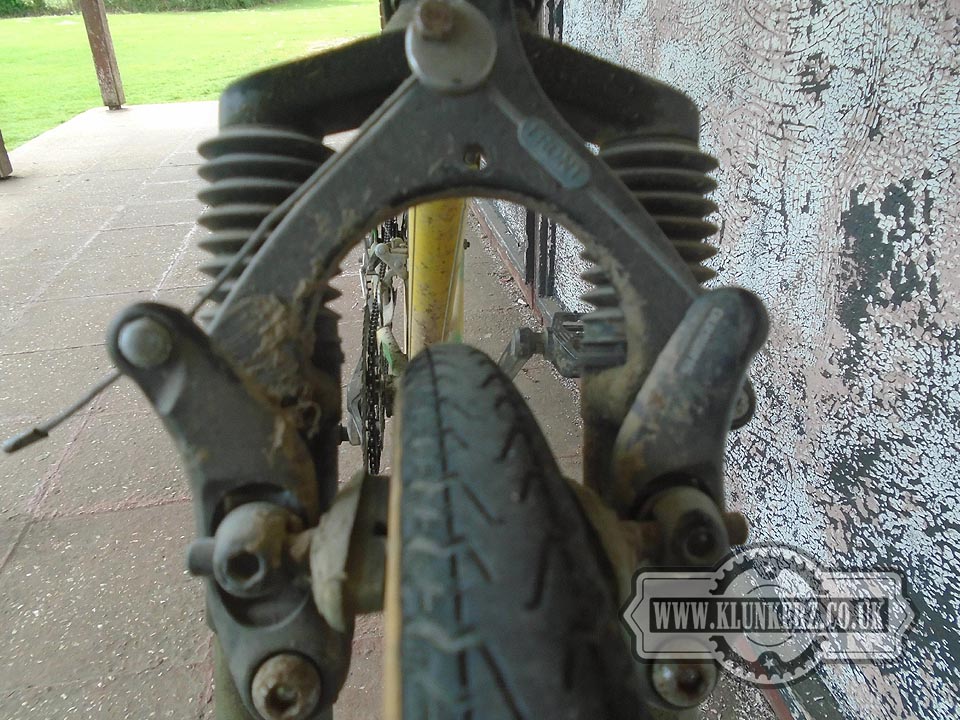 Brakes were upgraded as a birthday present from my Brother who was working part time at Halfords at the time. They were a massive upgrade from the cheapo pressed steel ones the bike originally came with! 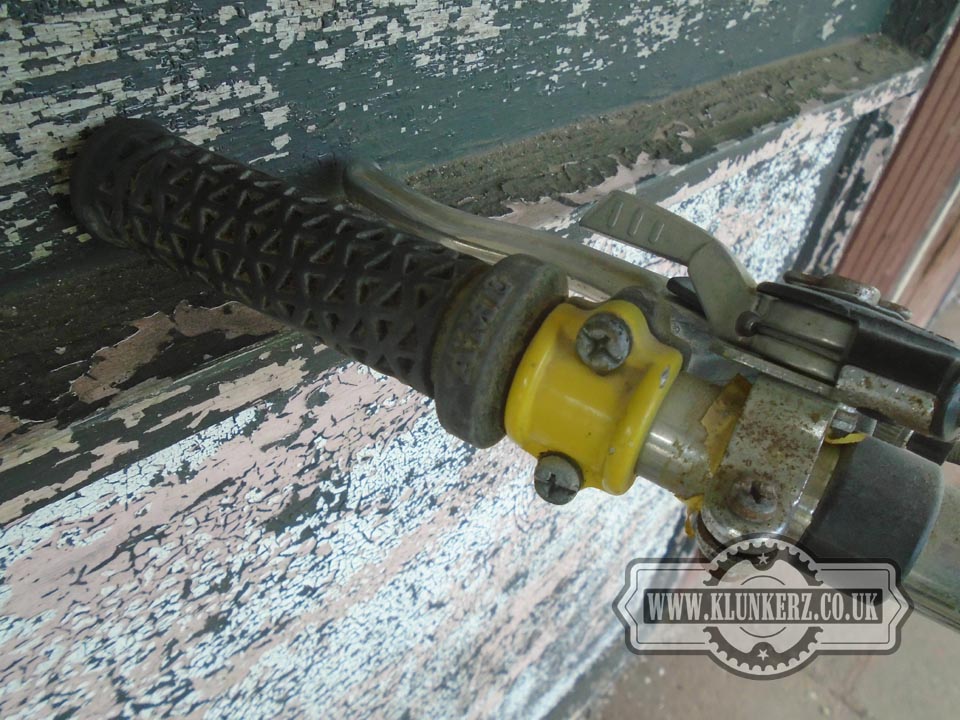 Ame grips that have lasted forever and are still comfy to this day, and upgraded shifter levers, aluminium, not cheapo plastic! 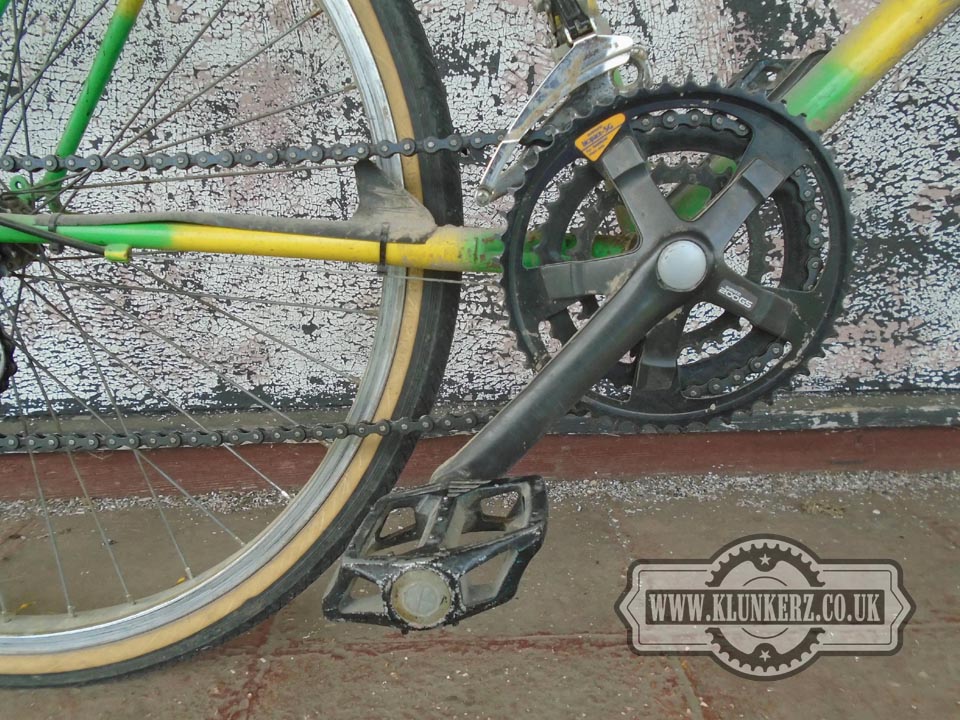 Shimano Biopace crank with Victor pedals, super strong aluminium wheels to replace the steel ones that I used to replace on an almost monthly basis! Panararcer tyres, that were only fitted last year! 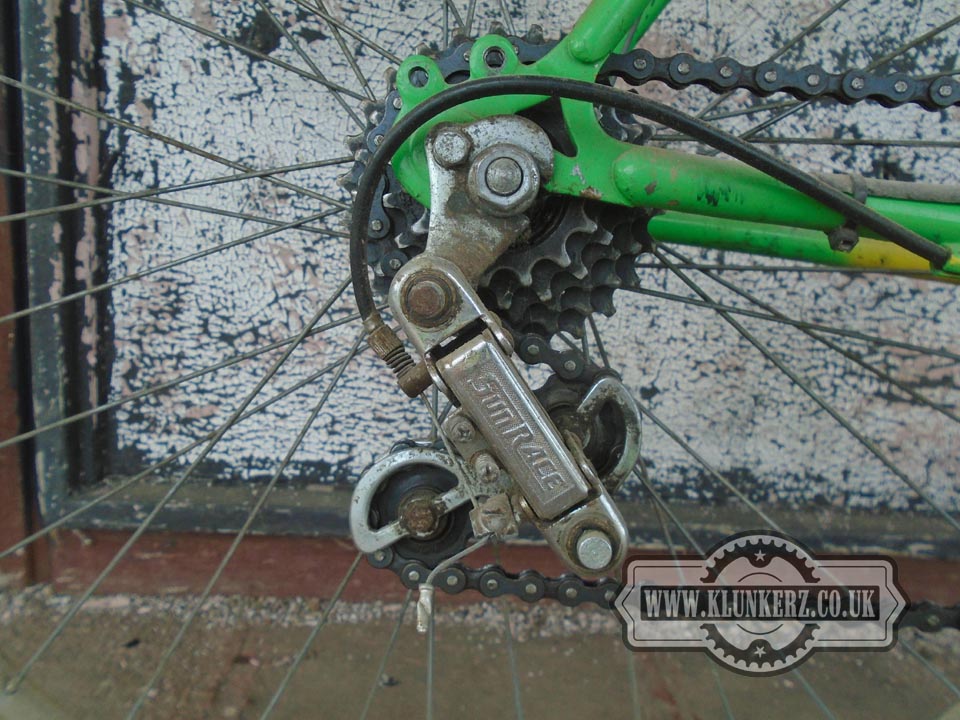 Sun Race rear derailieur mech, yep over the years this got many upgrades, and as much as I like it, I'm now wondering about putting it back to a more standard looking machine. Not completely stock, but a good strip down, keeping most of the upgraded parts, but maybe ugrading a few of of them, like having a few more gears for instance. Also, going back to a ridged front fork, and then a repaint in Silver again, and hopefully track down some original style decals for it! 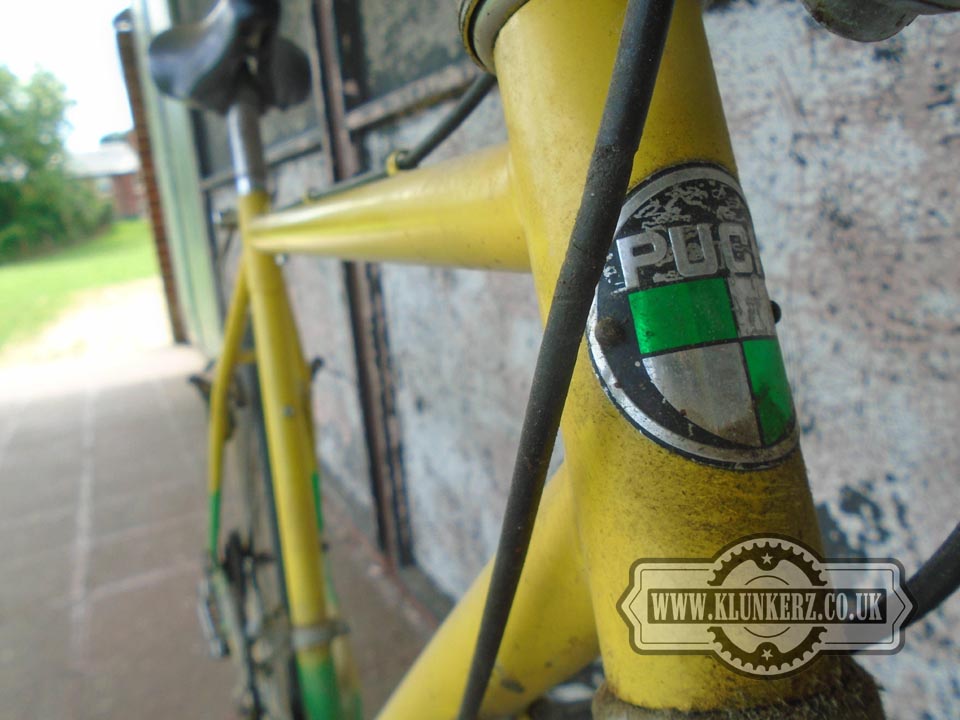 But all of this is in the future! For today I think that I'll just take it out for a bit of a spin at some point as its dry, and to remind myself of how it rides, as it was always very pleasant to ride. It is ofcourse a steel framed bike, and with that does come a certain amount of inherent weight, but it's not stupidly heavy, it never felt like it was made from gas pipe. Even though it only has fifteen gears you can blezz along at a fair old rate, and it's comfortable. The seat, although ripped is quite supportive. The frame although not quite as big as I like these days still fits me perfectly, and I love the old style mountain bike bars, welded solidly to the stem with a big V from the stem to the bars! Its comfy, it's good, and it's mine! However, I'm still not really sure that the skinny Panaracer tyres suit it particularly well. I like that they're road tyres, and they're quite grippy, but they will be one of the things that gets swapped out for something a little fatter... Infact, at this point in time i am thinking about swapping them with another bike I am fiddling with at the moment. I know they're skinny, and they're road tyres, but pretty much all of my riding is done on the road, so I figured I'd pop them on this Carrera I currently have, see how it looks, and see how it rides! Then see where we go from there! 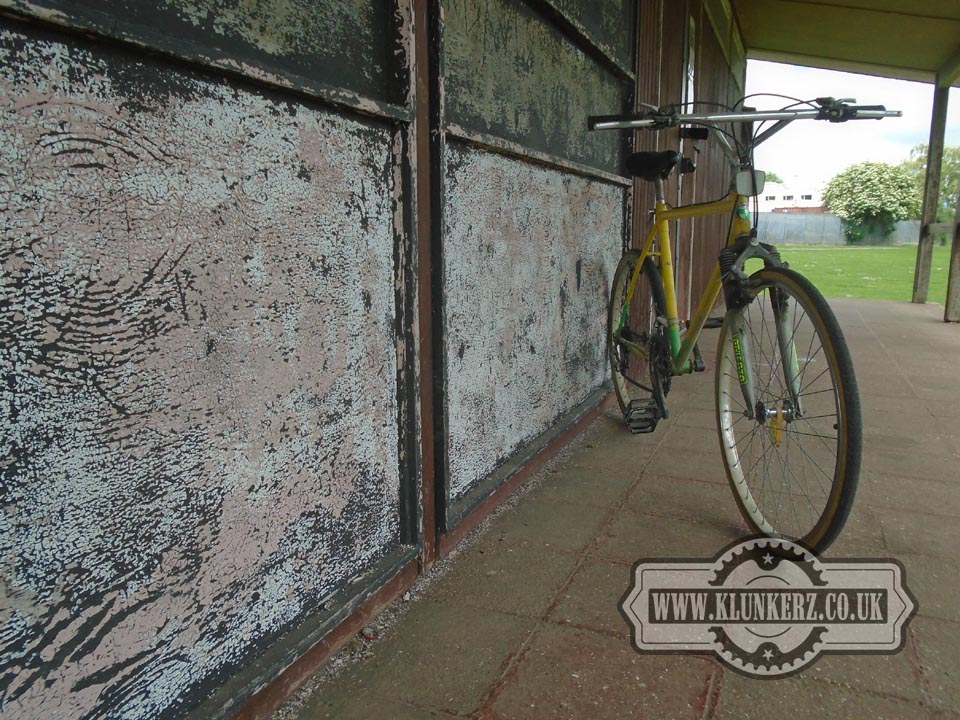 Anyhoo, as ever, updates as they occur. The way I see it, it will either be good or it wont, and if it isn't I'll just swap some other tyres onto it. As ever, only time will tell.