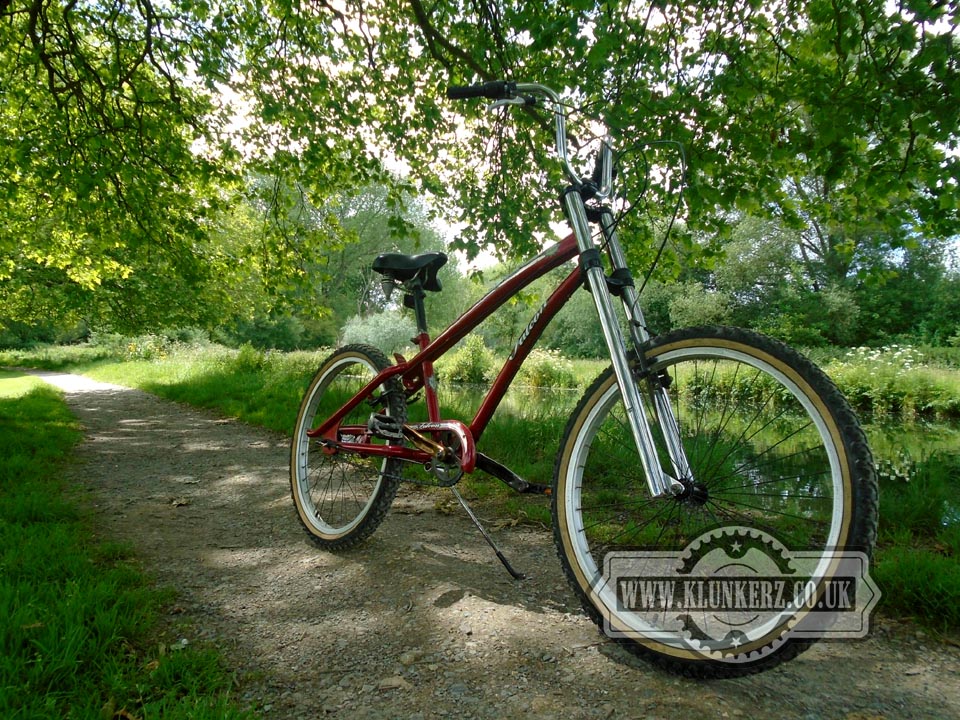 After fiddling around with my two autojumble finds I thought I would take the Falcon Long Beach out for a good run to see what it was really like as I've only really riden about a mile or two on it so far. So what is it really like? HARD! It looks so so cool, but for all this coolness there is indeed a price to pay! Lets start with the handlebars. 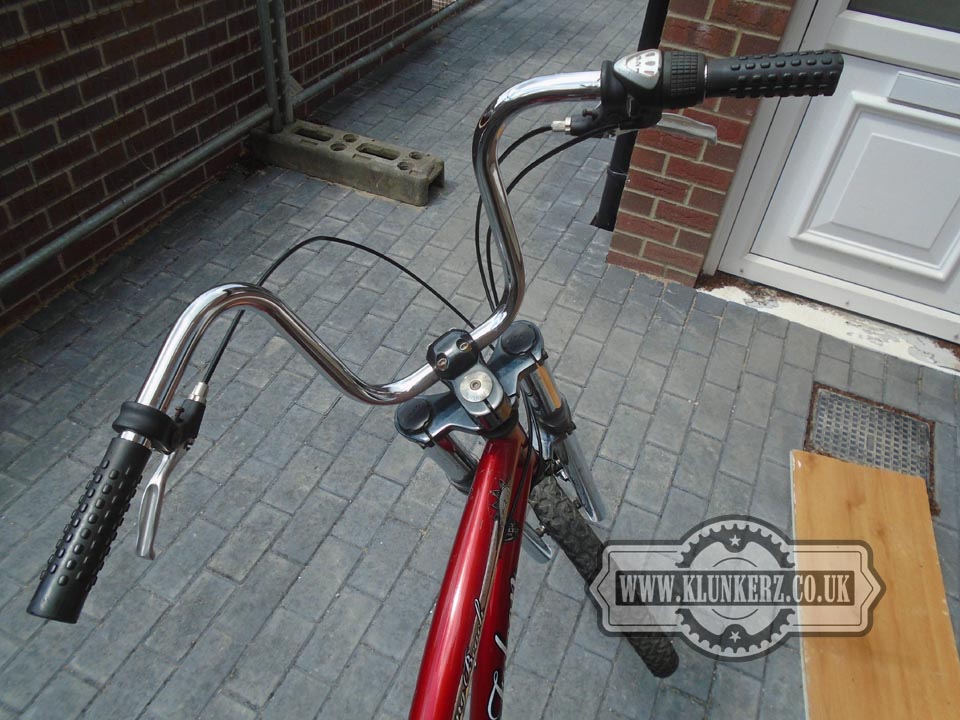 I don't know what it is, but no matter what I did with those ape hangers, I couldn't get them into a position where they were comfortable to ride with. 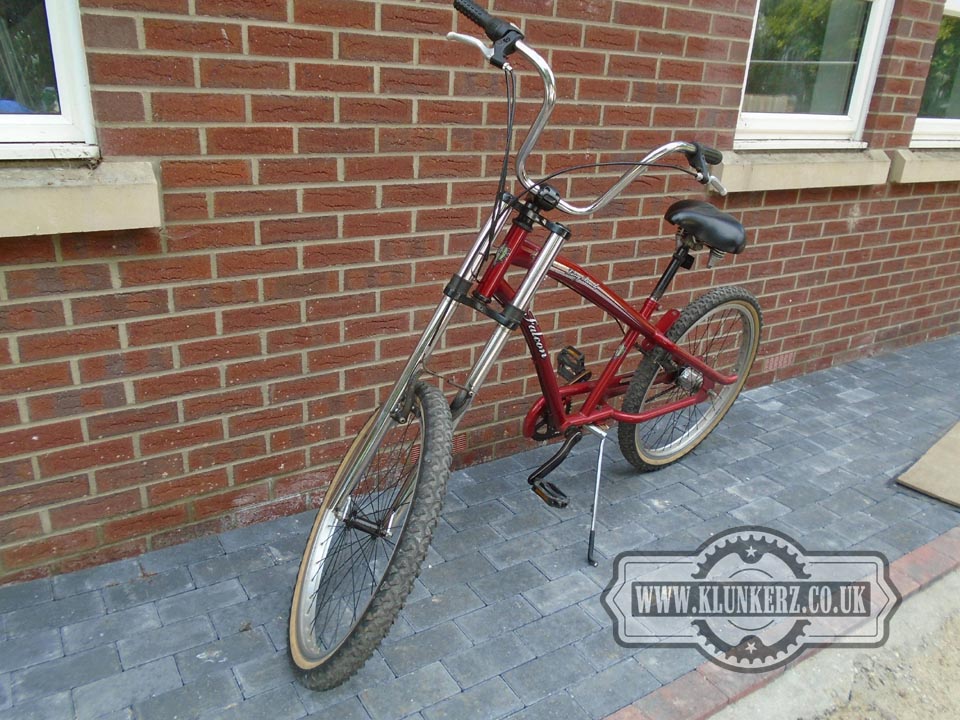 My feeling is that the problem is that the bit that you grip is curved back towards you, and as it's just below shoulder height it's not the best position for your hands and arms to be in. I need bars where the grips poke straight out the side, but they still need to be quite tall. My solution was to dig through my parts stash, and find a set of BMX handlebars and pop them on. Unfortunately none of  the handle bars I had fitted because they all flared a little in the middle where they connect to the stem, and therefore were too wide to fit. No matter, a quick trip to the tip yielded me this... 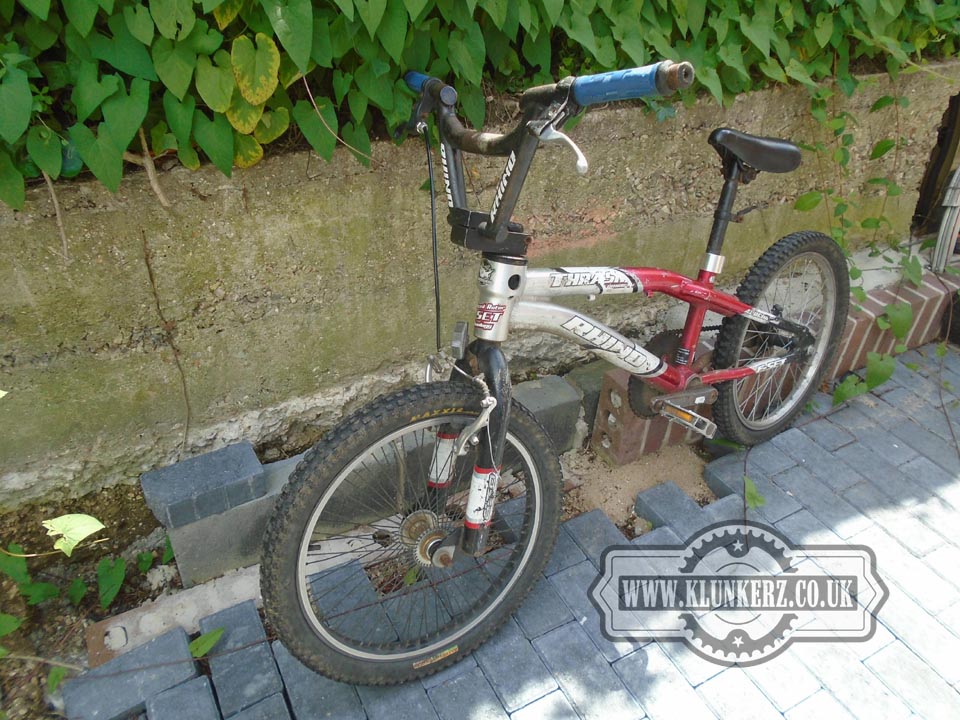 A Rhino Thrash... It just occured to me that a huge percentage of the bikes I get from the tip are brands that I've never heard of, although I think that a lot of the bikes are all made in the same factory and just sent off to different factories to have different manufacturers stickers put on them! Anyway, pretty soon the bars were removed, and fitted to the Long Beach... 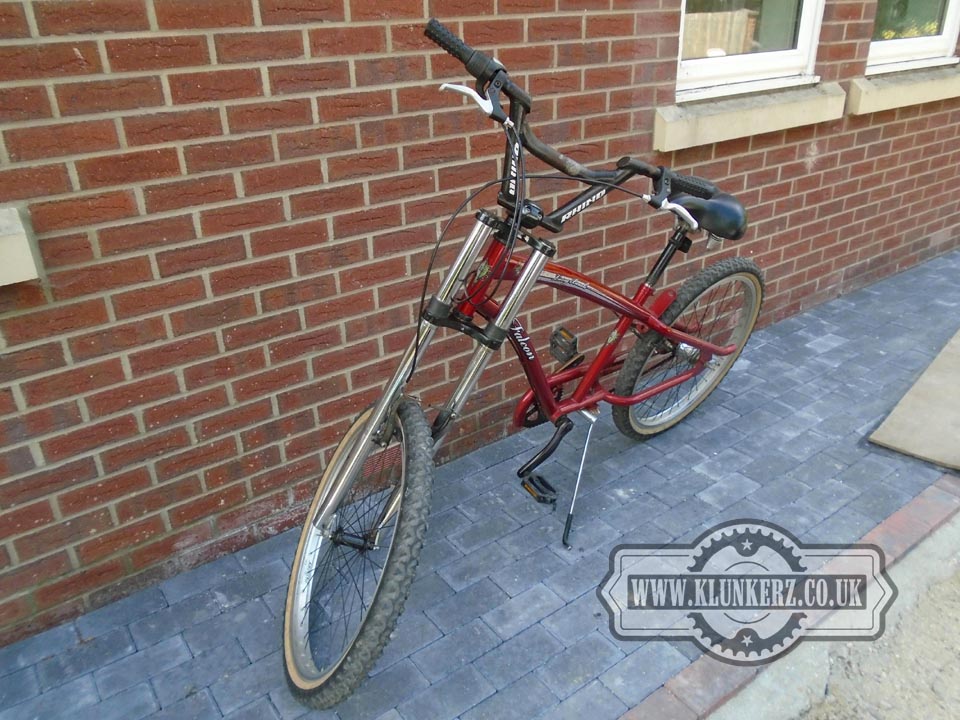 My feeling is that from an aesthetic point of view they're not quite as pretty, but this may be due to the fact that they have not got a great amount of paint on them, and have some rust. But, from a comfort point of view... A++! 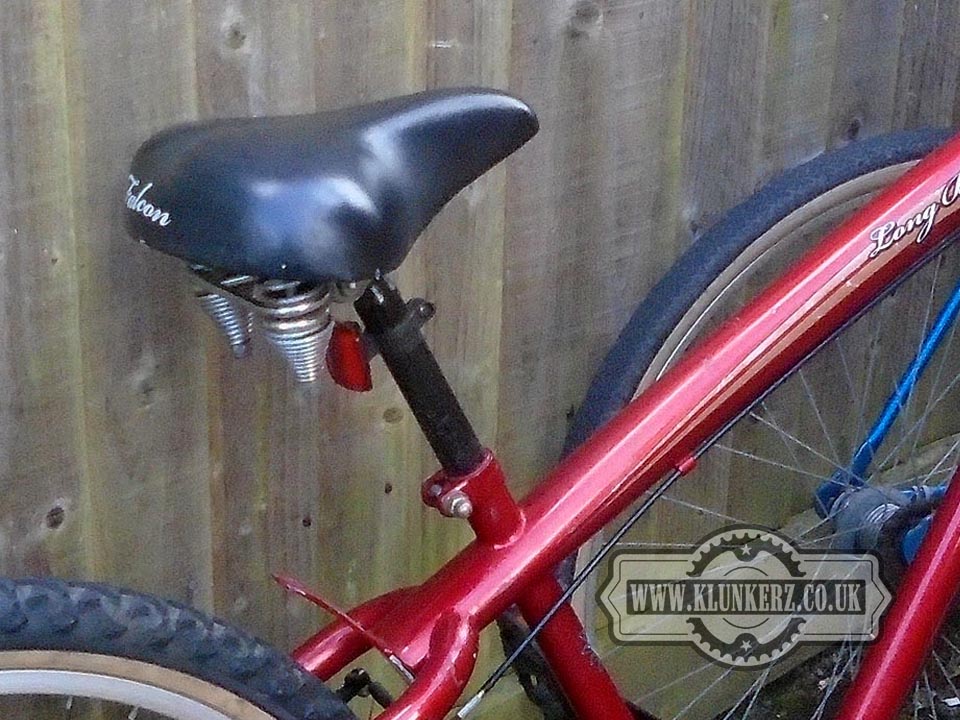 Now then, the Saddle... Now this is ample for even the most luxurious of bottoms, but not comfy, or atleast, not comfy when you've been riding for an hour or so! However, I am not sure if this is completely down to the saddle, or more likely down to the fact that due to my two little monsters high toilet paper useage, Mrs Clint has furnished our bathroom with a toilet paper that makes IZAL look damn right luxurious! (I came home one day and there was so much toilet paper rolled out around the bathroom and hall I was expecting a Labrador to come bounding out at any moment chasing a roll!) Needless to say I feel like I have been abused with the rough end of a Pineapple! So the seat may well actually be fine, I'll let you know next week as I've been out this evening and bought the softest toilet paper known to man, and I don't even care that it was almost a pound a roll, my bottom needs it, and deserves it! I've suffered enough! I've also hidden it from everyone else, if anyone is going to feel like they're wiping their bottom on a Koala, then frankly it's gong to be me, and it's going to be lovely! Anyway, the seat post, I reckon this could be better. I reckon that if I was to find an old school BMX layback seatpost, this would put the seat in a better riding position! Well, for me atleast! I searched through my stash for an old BMX layback but I didn't have one. However I was able to do something with that saddle! 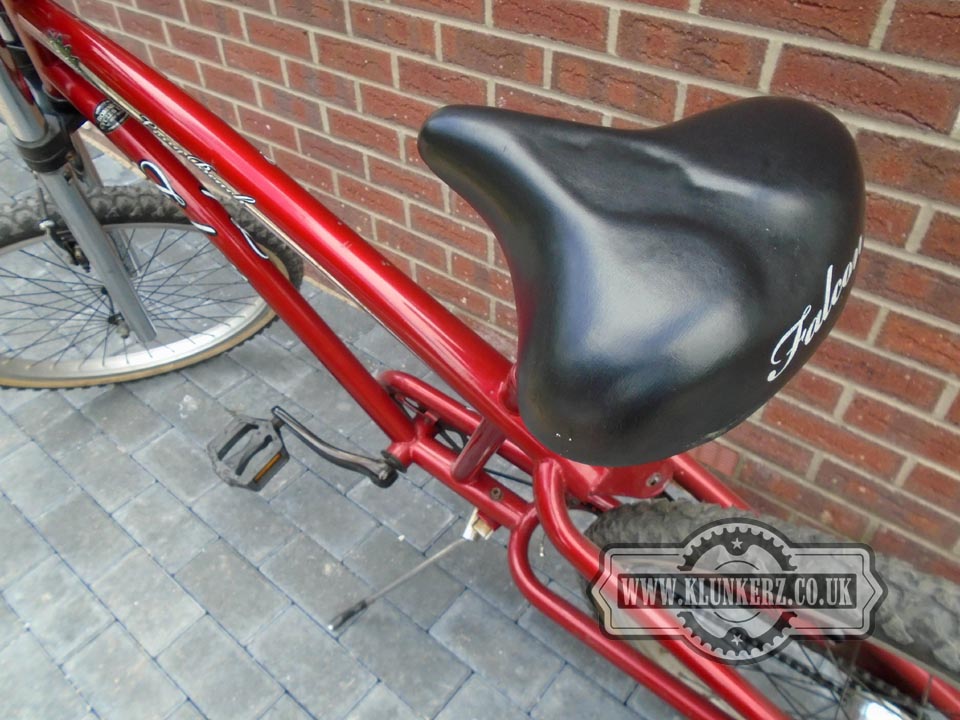 Look at it, that thing has no right to give me any discomfort, its huge, it's padded, it's like the Parker Knoll of saddles. I should be wafting along in the lap of luxury. But I'm not! Oddly, I think that apart from Izal abuse, it may well be the size of the saddle that is causing the problem. However my feeling is that if I put a normal size sized saddle on it, then it will look ridiculous! Therefore, while I was at the tip shopping for BMX bikes, I found a bigish Gel Saddle on a Gary Fisher bike... Which I then liberated! 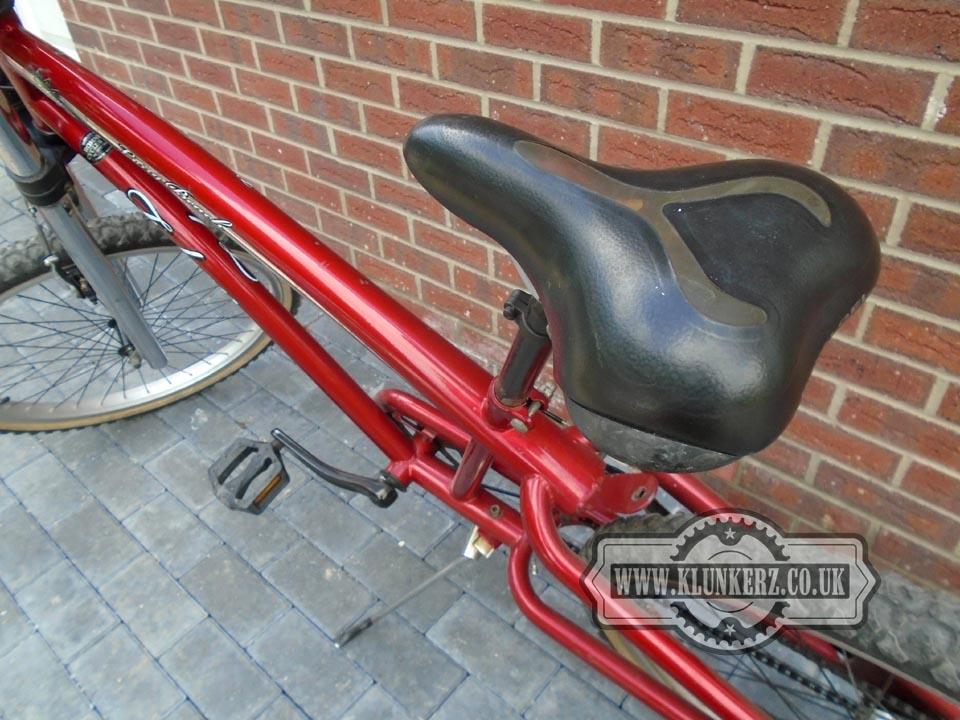 New slightly smaller Gel saddle on, and off we went again. I didn't go too far, but already it feels so much better. I'm not sure if its the handlebars, or the saddle, thats made the difference, but it's definately better. My guess is that it's a combination of the two. This bike is never going to be brilliant to ride because of it's size, weight, and style, but thats not what it's about, it's about cruising about on the flat, and at that, it is pretty good. 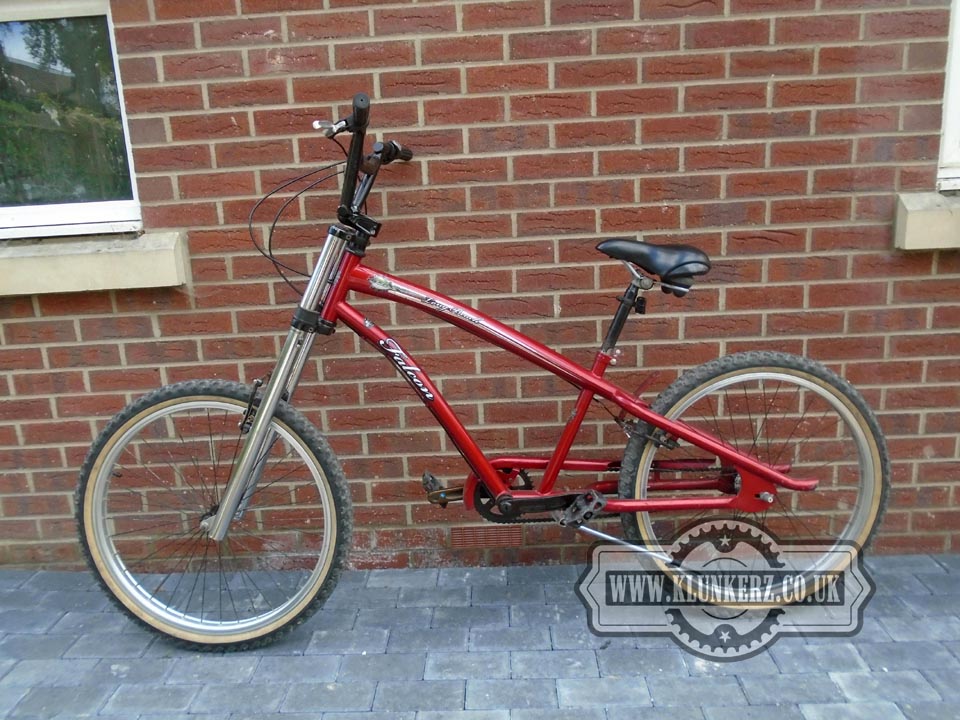 I'm still not completely sold on it though, and I don't really know if theres a future for it in my collection or not, but what I do know is that I'm going to ride it about until the end of the year, and make my decision on it when the spring comes. To look at it in profile I'm not sure if it looks better or not, but nevermind, for now while the big golden orb is out, let's ride! 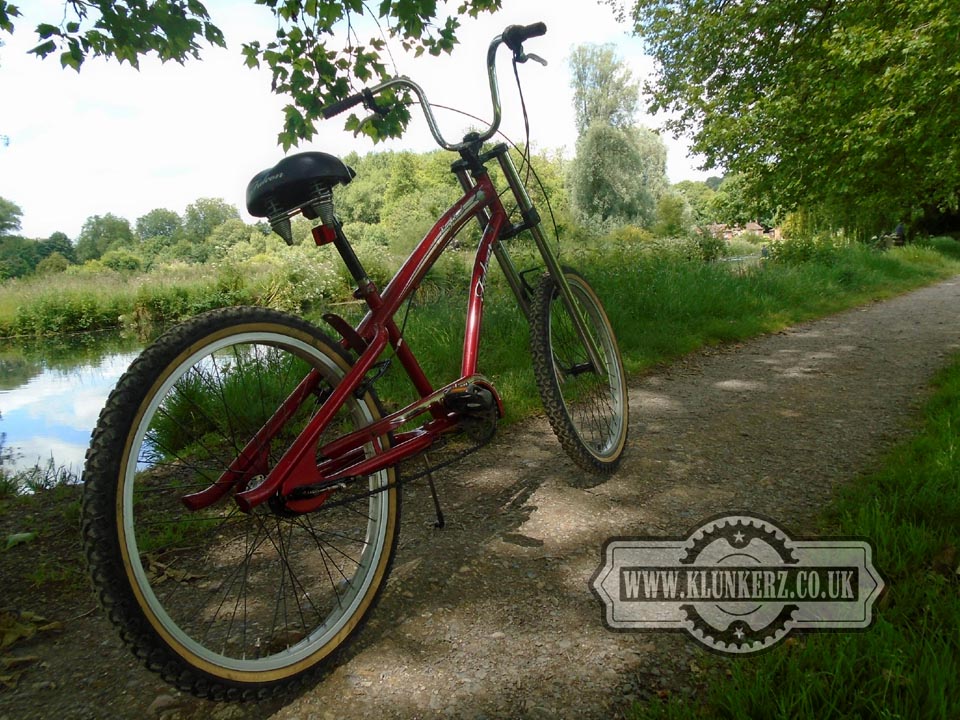 Other than that, I may well lose the knobbly tyres, get something fatter out back and skinnier up front and that would be awesome! You get a lot of looks on this bike, and due to it's heavyness I'm sure I'm getting far more excercise that I would be on a normal mountain bike or something! So hopefully it's doing me some good, as frankly I've been slacking with my excercise programme lately! I'm really wondering if I should take out one of my other cruisers to see how that compares to the Long Beach... Maybe I'll give it a few days and wait until after I've fully recovered from IZAL abuse! 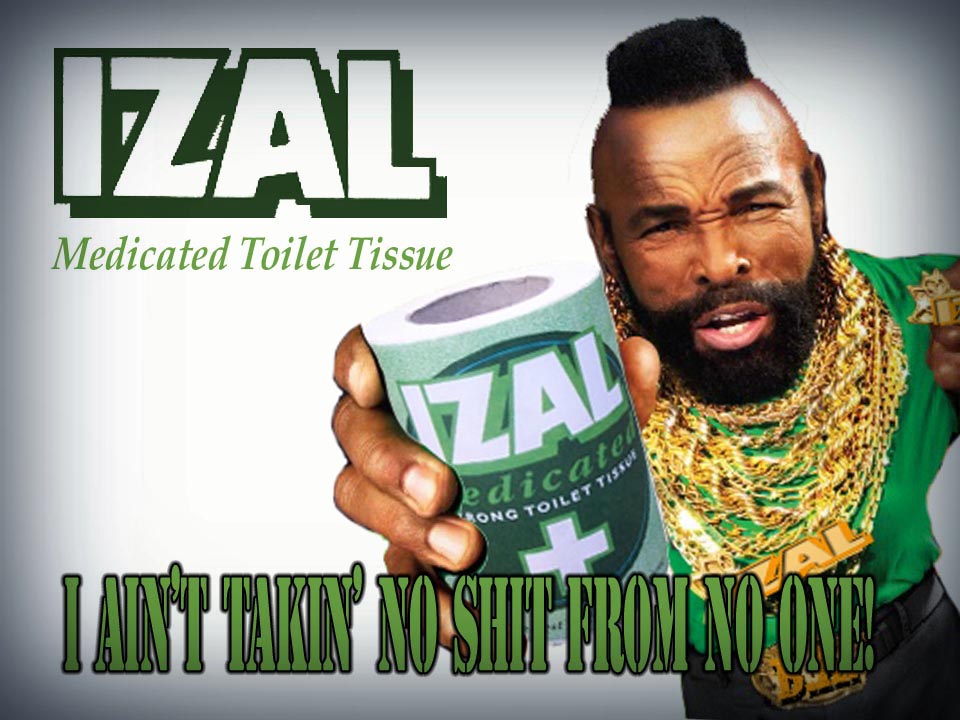