January 31, 2018
When we left my last update on the Diamond Back Topanga, (Episode 51) I was waffling on about it needing a set of wheels, and having some built for it at Halfords. Well, I finally got around to dropping them off at Halfords for them to turn one of them into a complete rear wheel for the Topanga. The reason that I needed them to do this for me was quite simple. I had found two wheels that were the same in style, and manufacture, but different in colour. Also, they were both front wheels! I was initially unsure about having two different colour wheels on my bike as this is something that I knew would set off my OCD alarm. But as there was really no other option because I could only find one red one, and one blue one. In the end I thought, screw it, let's do it! 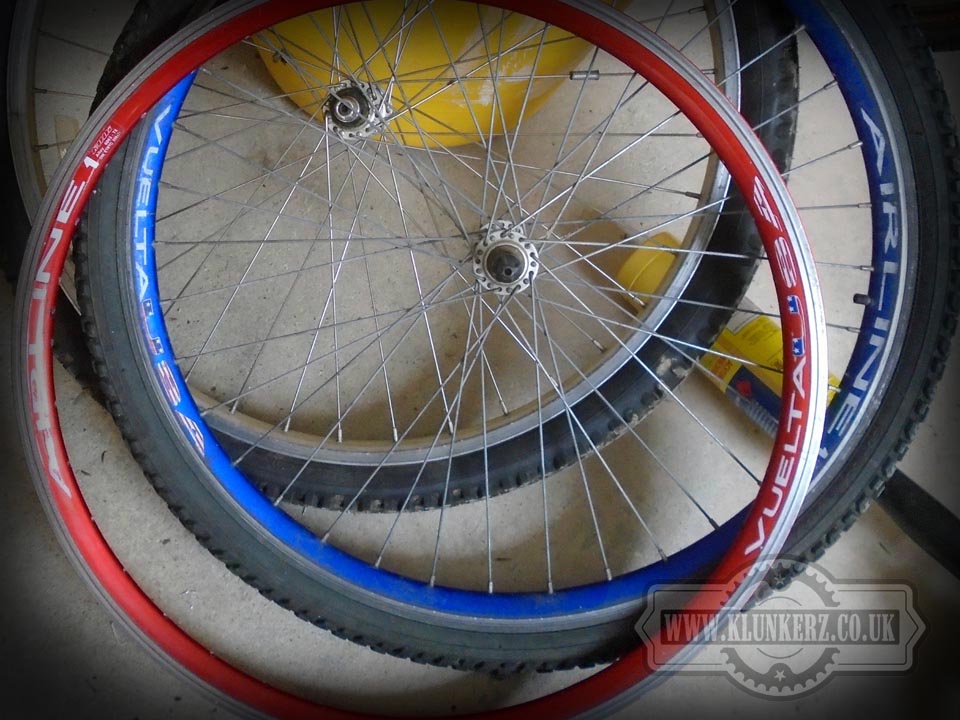 I removed all the spokes from the red wheel, and took both the red rim, the blue front wheel, and a complete, but buckled rear wheel up to Halfords and let them get on with it. A week or so went by and they called me up to tell me that my wheels were ready to collect. I headed to Halfords thinking that I would also, while I was there buy a couple of white tyres to put on my wheels. Sadly for me they had no white tyres in the size I needed. So they relieved me of just over £40 for the wheels and I headed back to BelongaClint to eagerly fit them to the Diamond Back. On the way home, and as I was passing I decided to call in to see a friend of mine, a BMX fanatic who has a parts stash that would rival most cycle shops. I wasn't looking for anything, but I wanted to show him my wheels and ask him what he thought. He liked them, and as his OCD level isn't anywhere near as high as mine, he thought that the red and blue would look great together. Hmm, I still have my reservations but ok. Anyway, I asked him if he knew of anywhere I could get me some 26" white tyres right now. He didn't, but he said that he thought he might have some old 26" white wall Beach Cruiser tyres in his stash, and I could have them if I liked for free! I wasn't about to turn that offer down, and we headed out to his workshop to try and find them. Before too long we were stood infront of a pile of bicycle tyres of all sizes, and colours which stood about four feet tall! Luckily for me you could see the Beach Cruiser tyres poking out near the top. We grabbed them, went back inside for a cup of tea as it was chilly out, Tea drunk and digestives eaten, I headed back to Belonga Clint to get the tyres on the wheels, and the wheels on the bike! 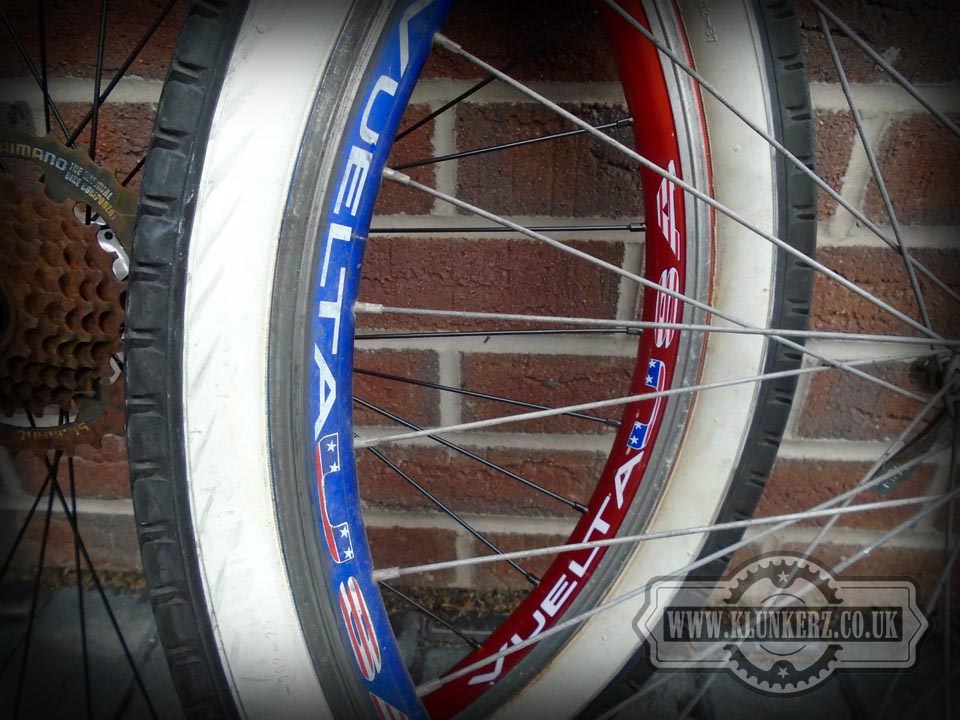 Tyres on, and although not quite what I had in mind, I must say that I quite like the white wall look, and I am wondering whether completely white tyres would have been too much. They're not new tyres, but they've not had much use, and besides, you can't complain at the price! I quite like these, and I have the same tyres on one of my Beach Cruisers. I like the shape of them, they're not rounded like normal bicycle tyres, they're sort of square walled and the tread section is quite flat. But they handle quite well on my Cruiser. Anyway within about half an hour I was looking at this... 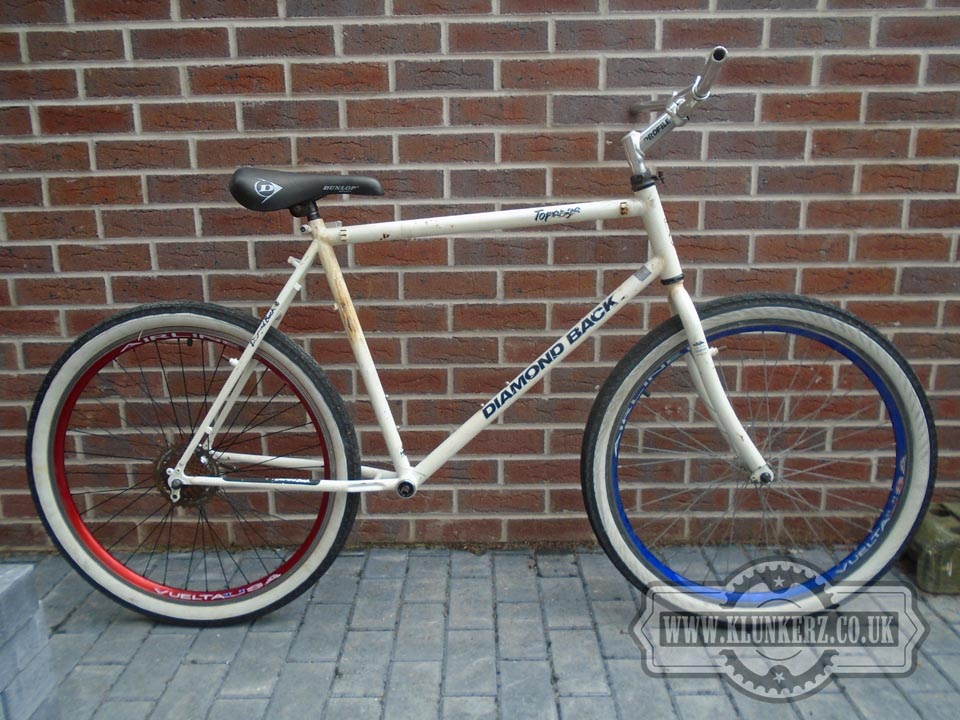 I must admit that my OCD alarm hasn't gone off, and actually, I quite like it, it's very Red, White, and Blue! Actually, as it didn't set off my OCD alarm I'm starting to wonder if I should fit it with one Red tyre on the rear, and a Blue one on the front, although I do like the white walls! So this is currently where I am at. I now need to work out what chainset I'll use, what gear and brake levers, and what brakes I'll use. Then get a new chain, and new cables put all together and see what its like! 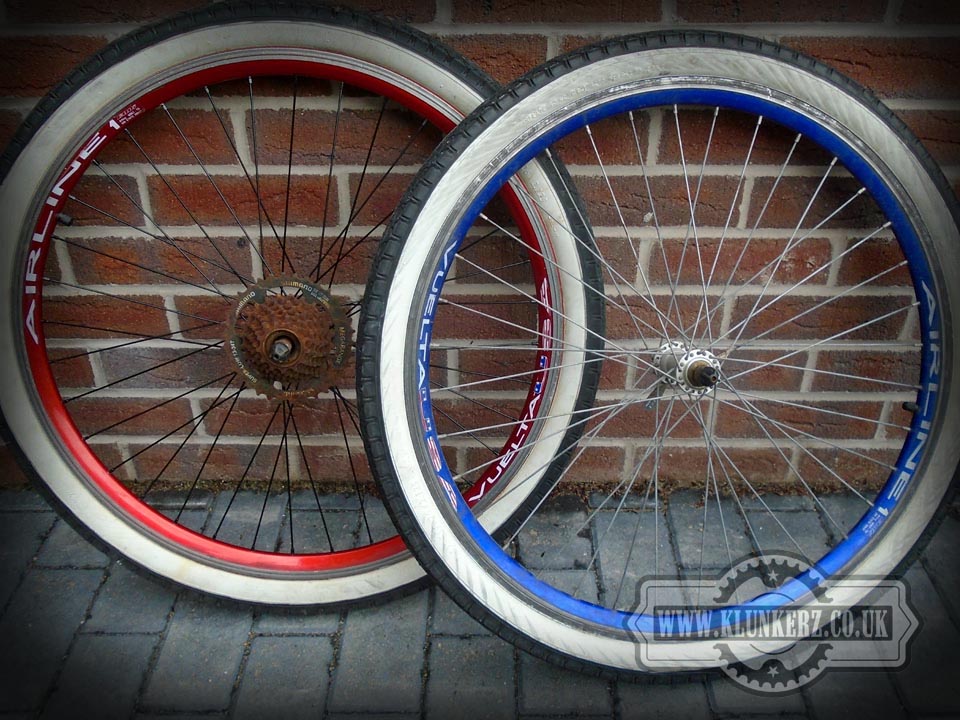 Red and Blue wheels together with White wall tyres, who'd have thought it would look so good! I am itching to ride this thing now. It has put up a fight pretty much the whole time, but hopefully once it's all together it'll be great, but only time will tell... Hopefully by the weekend I'll have gone through my stash, found suitable bits for it, and it will be ready to ride... Can't wait!