April 11, 2018
Modern society is wasteful. A case in point is this rather splendid Emmelle Classic 300 mountain bike... 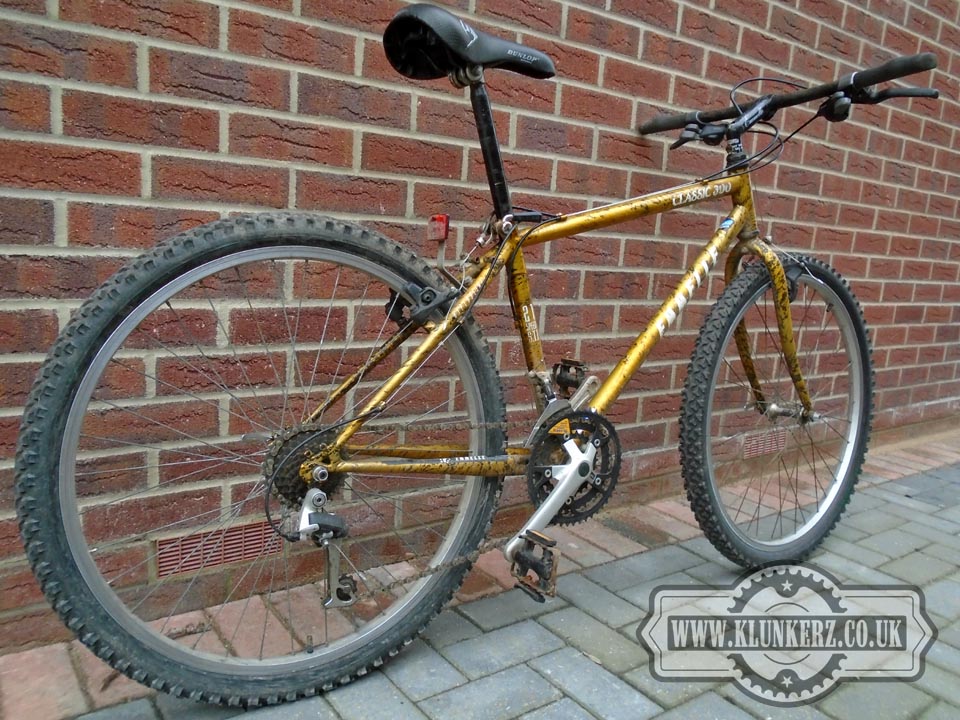 I found this little beauty by the roadside in a skip, it had no seat, and the innertubes were hanging out of the tyres, and wrapped around the hubs of the wheels which prevented the wheels from turning. I gave it a quick glance over as it layed there in the skip, and then I figured that if nothing else, it might be good for parts. To be honest, it was pretty much a certainty that once I had seen it, it was going to get dragged home to BelongaClint. 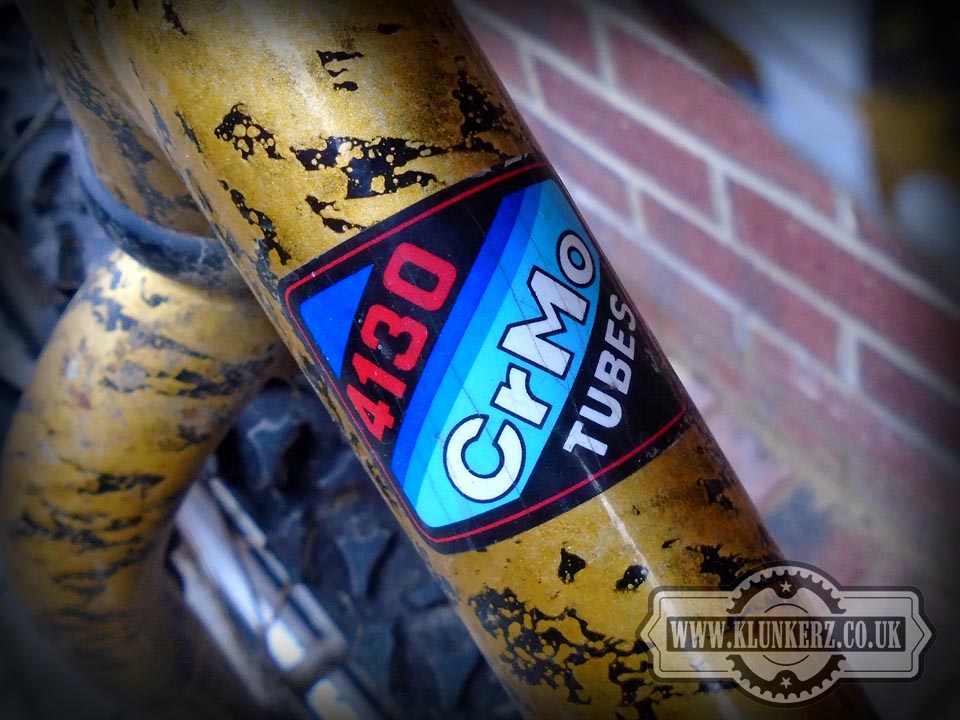 But once back home, and after a proper assessment I thought that it's probably a bit too good to be broken for parts, and after losing the Integra Phantom in the previous post I figured that as crap bikes go, this is probably a litte bit better than the Integra, so why not put it to some use. Besides being made from chrome-moly 4130 steel which is a high tensile grade of steel that obviously contains chromium and molybdenum, the frame should have an excellent strength to weight ratio and should be considerably stronger and harder than standard carbon steels like that of the Integra frame. So hopefully it would be good to ride, and strong enough for my lardy arse! 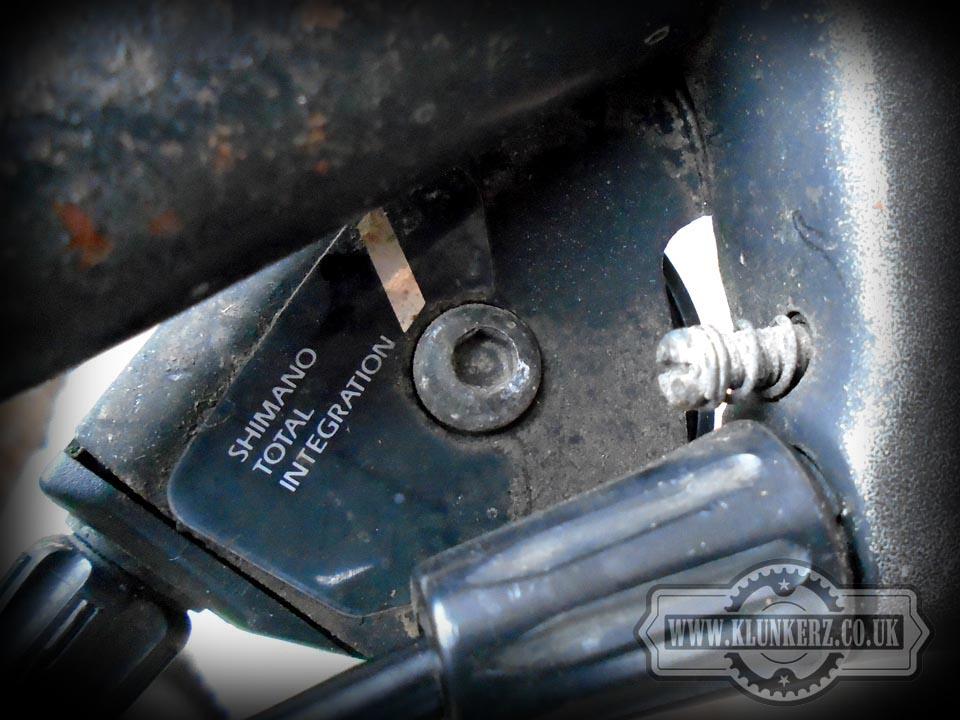 Shimano Total Intergration... I love little details like this... I wonder what the heck it means though! 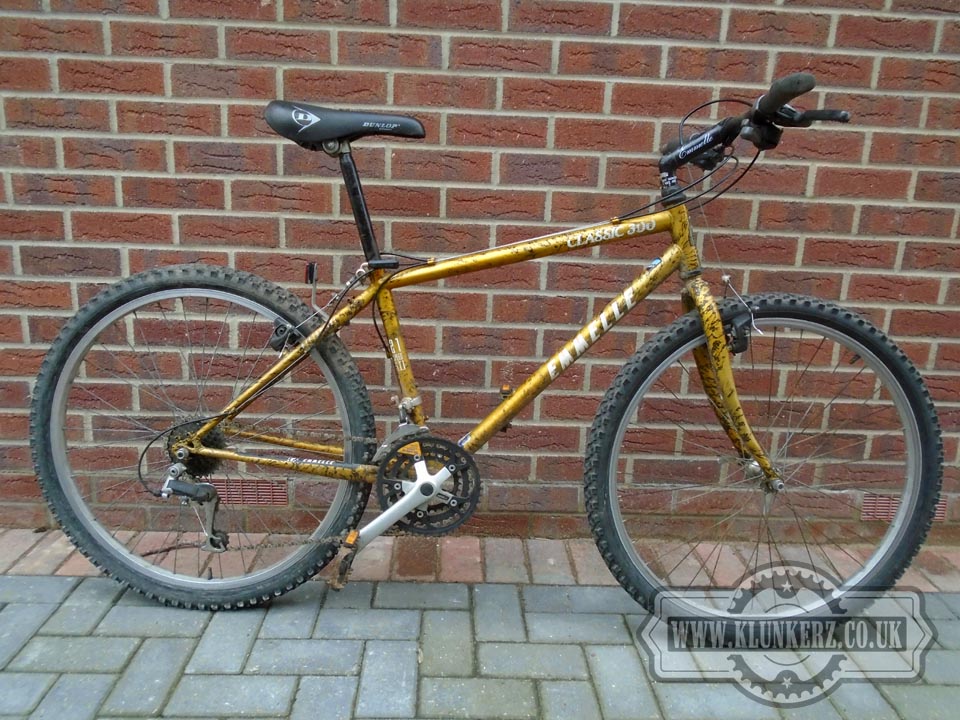 So, back home and new tubes were sourced from my stash, and a saddle was also located, and before long I was looking at a bike that could be ridden. Sadly the seat post seems to be stuck in the frame, but as luck would have it, it's pretty much where it needs to be for me! It was looking less and less like a parts bike, and more and more like a bike I would be riding! 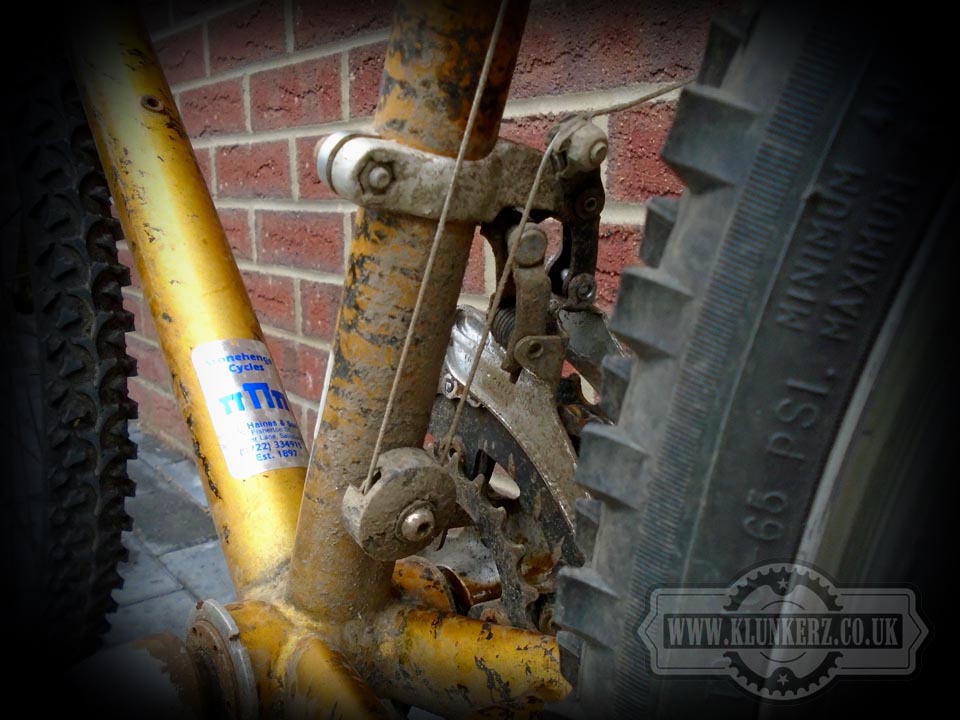 It probably could do with a thorough cleaning, but it probably wont be getting one from me! Although I do quite like the gold and black paint finish on this thing, I wonder how they manage to get the finish like it. I presume that it's nothing more than two paint finishes that don't react well to one another, but I really don't know, or even care that much... I like it! 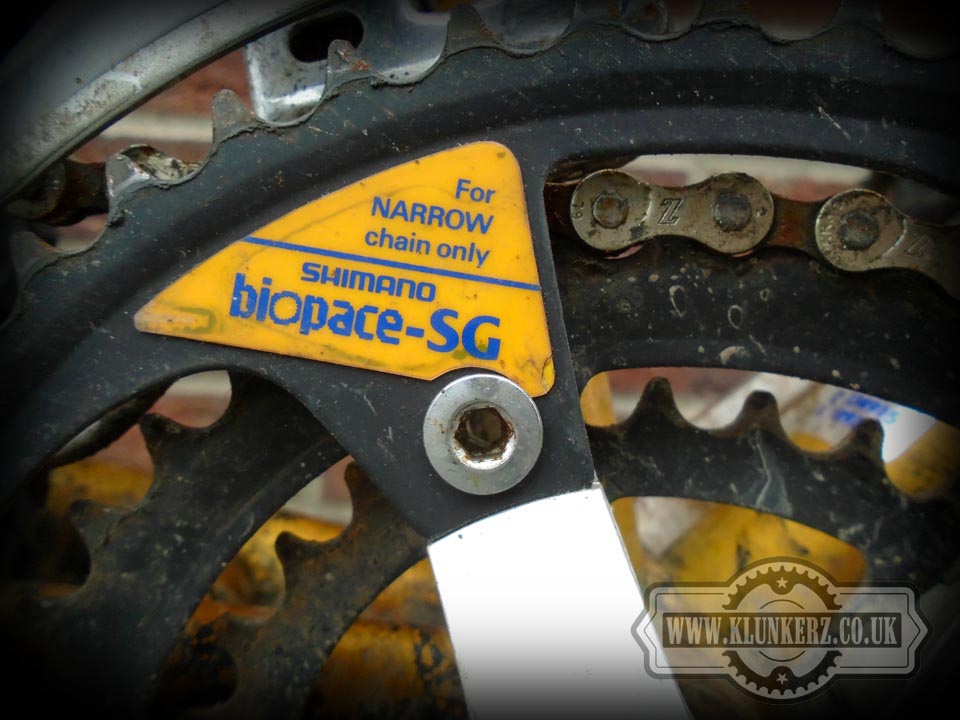 Another thing I quite like and have not seen on another bike outside my own Puch Mountain Cougar is the Biopace chainring. These have a reduced chainring diameter coinciding with the cranks being horizontal. This is supposed to smooth the pedaling action, allowing the rider's feet to carry more momentum through the power stroke, and having it smoothly removed at the bottom of the stroke rather than encouraging riders to push bigger gears and risk knee damage due to higher knee joint loadings. I really don't know if theres any benefit to these, but it's kinda cool in my eyes. 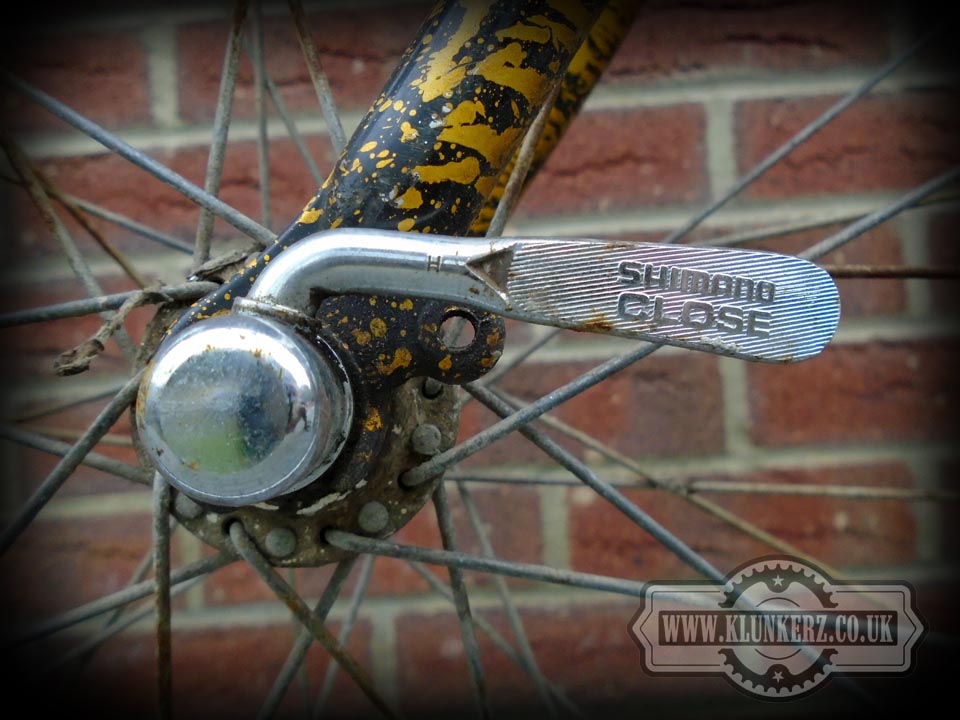 Again, another accessory that I quite like, I had forgotton how chunky these Shimano quick release skewers were, and it has them front and back. 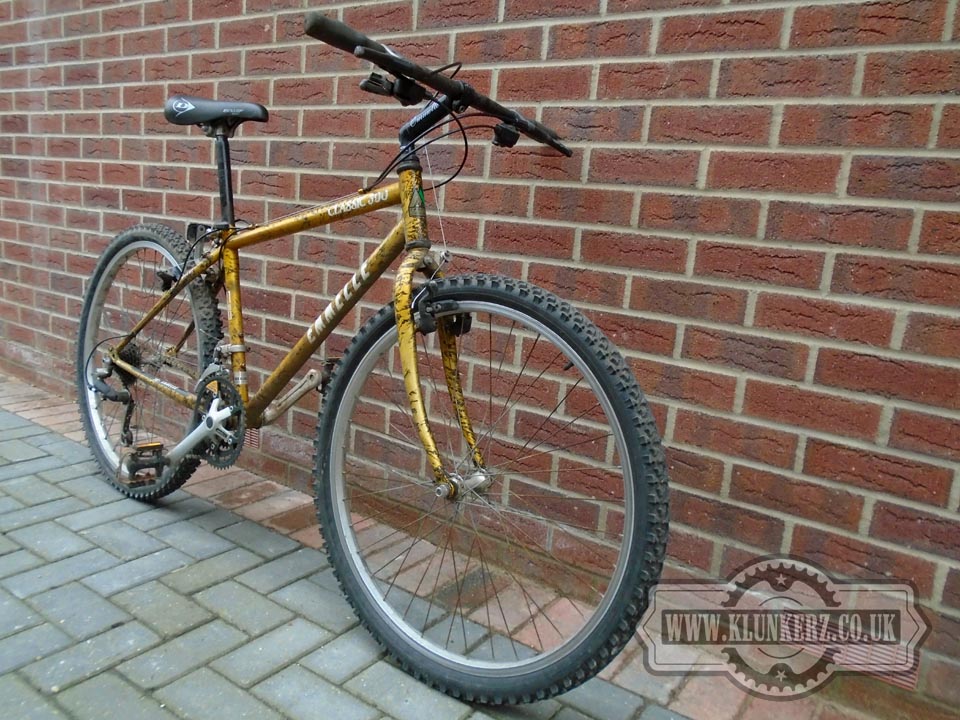 Anyway, I thought I'd take it for a little ride, and actually it rides quite well. But It's not a keeper. The reason for this is that for me it's just a little bit too small, and my heals clip the rear cantilever brakes arms as I pedal along. I could probably rectify this by fitting a V-brake system, but I've got enough bikes to play with, so I won't bother, and instead I will just sell this one. Before I do however I am planning to swap some parts off this Emmelle, nothing major, but I'd quite like to keep hold of the Biopace crankset for its historical accuracy on one of my older bikes and for no other reason other than its novelty value, or maybe just it's retro-cachet! For the same reason I shall be swapping out the quick release skewers, and replacing them with a more modern aluminium affair, and thats about it really. Hopefully someone will get a cool old bike to get them from A to B, and I will get some cool old parts for a future project!