April 16, 2018
I've been tinkering with the Daewoo Genius lately, I'm sure that there's a better bike in there somewhere... 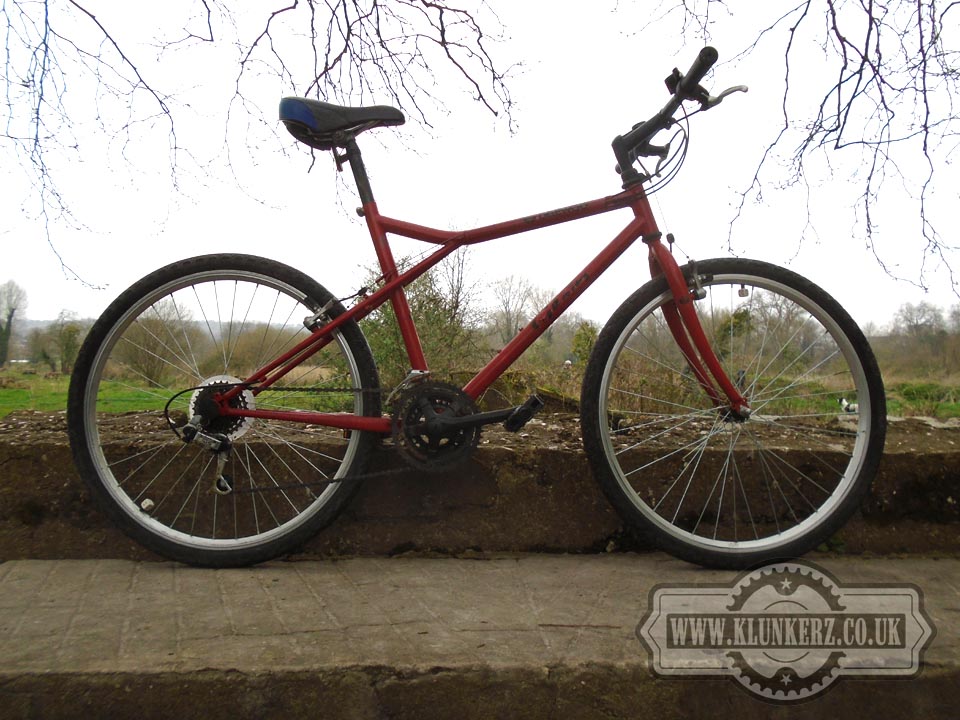 So far this is what I've come up with. I don't think that it's a bad bike, but like so many bikes that are cheaply produced its a heavy bike. I've really not changed all that much, it really has been a case of fettling what I have rather than making big changes. I've not even cleaned it yet, I feel that at this point there's no point as its still quite muddy out there, and I think further fettling may be required anyway. 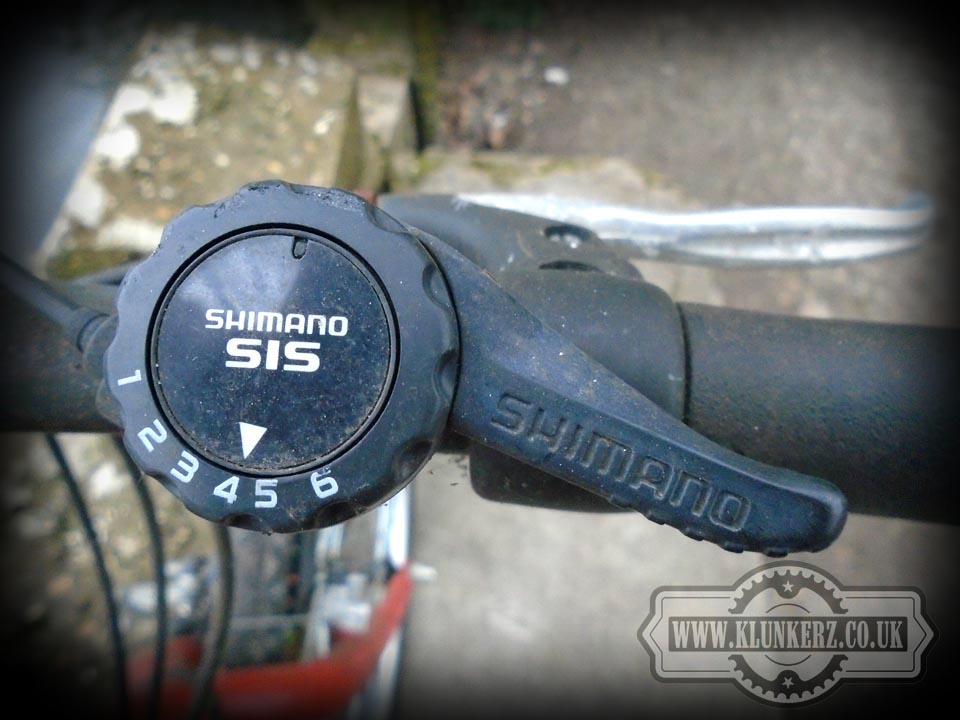 Its funny, I keep looking at the gear selectors, and as much as I like them, I feel that I need to change them for something else, although at this point in time what I change them too is anyones guess. I've had a bit of a raid of my parts stash and there's nothing there that I want to fit to the Daewoo. I'm going to have to branch out a little and go and have a rummage in my cycling friends parts stash's to see what I can find there. 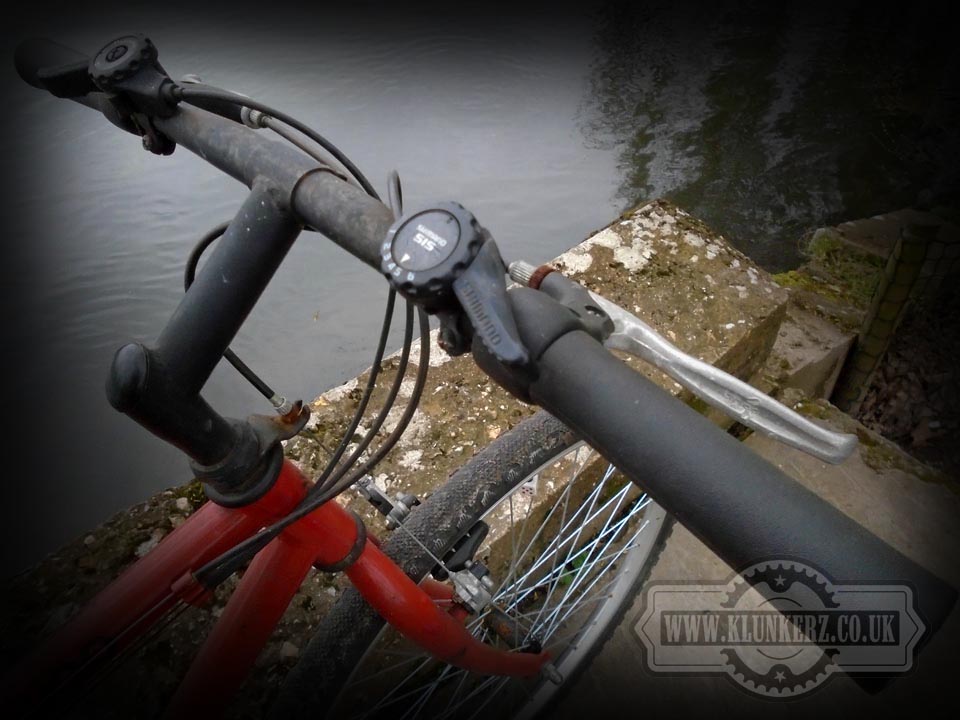 One thing that I am definately going to change is the handlebars. I don't dislike straight handlebars, but I just cant seem to get these into a position where they're comfortable. I can't quite work out why, I mean how wrong can you get the positioning of the handlebars when they're pretty much straight. I have wondered if the problem is the width of the handlebars as much as anything. 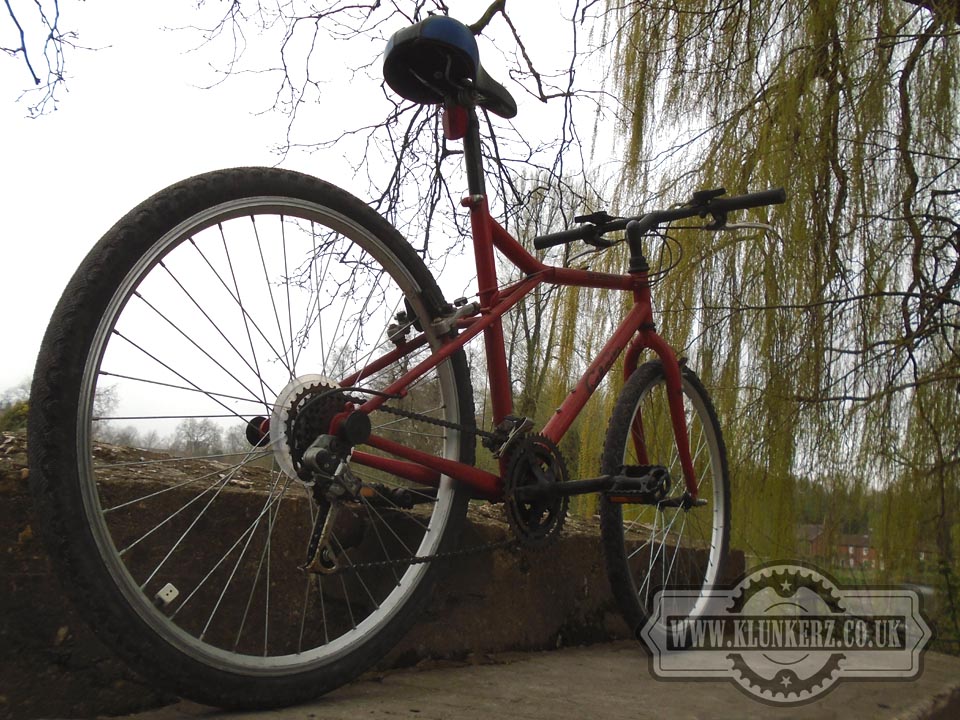 With the exception of the handlebars it really isn't a bad thing to ride, I have swapped the saddle for the saddle that came with the Fat Boss BMX that I found a couple of weeks back. 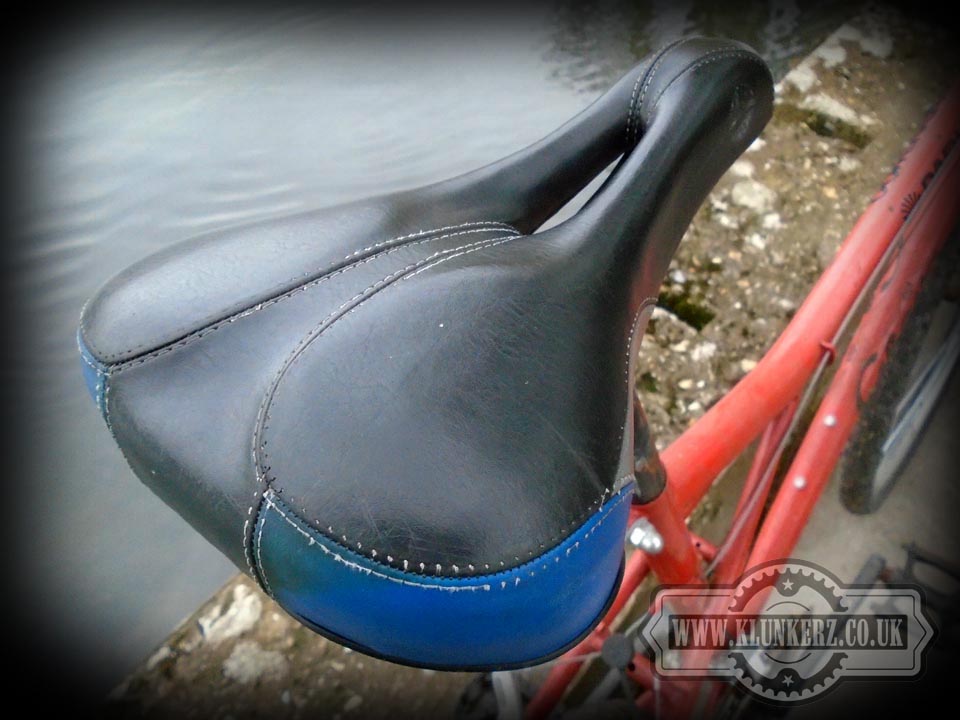 As, unlike the one that came with the Daewoo, this one wasn't too scuffed, has no rips or tears, and has the added benefit of a bit of padding! Now, I do wonder about the purpose of a saddle with a hole in it like this, I know the general consensus of opinion says that when riders sit on a classic saddle with a teardrop shape and a long nose, a quarter of their body weight rests on the nose, putting pressure on the perineum. The amount of oxygen reaching the penis typically falls 70 percent to 80 percent in three minutes. A guy can sit on a saddle and have his penis oxygen levels drop 100 percent but he doesn't know it! After half an hour or so he goes numb in man-land, and I must admit I've had this on some bikes! In men, a sheath in the perineum, called Alcock's canal, contains an artery and a nerve that supply the penis with blood and sensation. The canal runs along the side of a bone, and when a cyclist sits hard on a narrow saddle, the artery and the nerve are compressed. Over time, a reduction of blood flow can mean that there is not enough pressure to achieve full erection. Hmm, not had any trouble with that before, but I don't really like the sound of it! The studies add to earlier evidence that traditional bicycle saddles, the type with a narrow rear and pointy nose, play a role in sexual impotence, and the more a person rides, the greater the risk of impotence or loss of libido. Which doesn't sound good to me either. In order to combat this some manufacturers designed dozens of new saddles with cut outs, splits in the back and thick gel padding to relieve pressure on tender body parts.  It's all very well cycling to try to stay fit and healthy, but if 'Vlad the impaler' doesn't work, what am I staying healthy for? Anyway, this all adds up to the idea being that saddles like this have splits in the back or holes in the center to relieve pressure on the perineum... Well, I don't know about that, and to be fair there's a fair chance that its propaganda put about by the saddle manufacturers to sell a few seats! Having said that, I have experienced that numbness after a ride of an hour or so, so really what do I have to lose? Well, I've never had a saddle like this before, so when I took it out for a ride I did wonder what to expect. I rode for nearly an hour, and in all honesty it was pretty comfy, and I experienced no numbness in man-land. Therefore I'm guessing that it's working as the designers intended it too. Added to that I can also report that it did help with the expulsion of toxic gasses created by too many sprouts, and beans so it's probably a good thing! 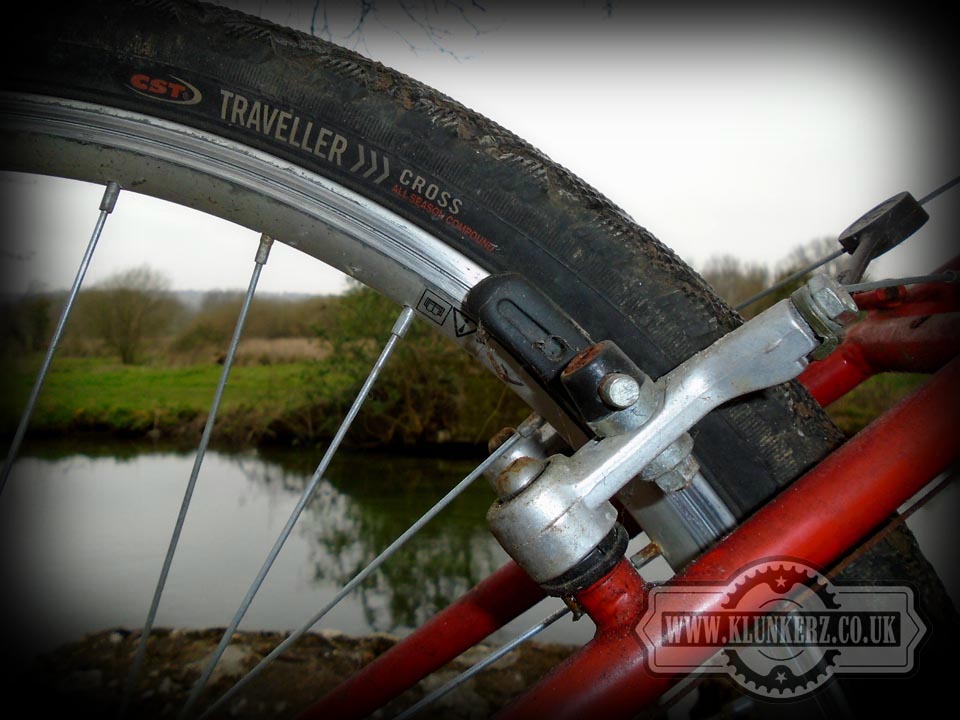 The tyres, now I quite like these tyres, and because I've got quite a few in my stash I have used them on a lot of bikes. They seem to be quite good, and confortable. They are marketed as a sort of town and country tyre. However, on paved surfaces which is what I ride on the most they are pretty good. But when the going gets muddy, those few knobbly bits around the outside do absolutely nothing! So, although I'm quite happy that I'm not buzzing like an old Land Rover as I pedal along the cycle paths I may well change these to a proper dedicated road tyre, just for no other reason that I fancy a change really. 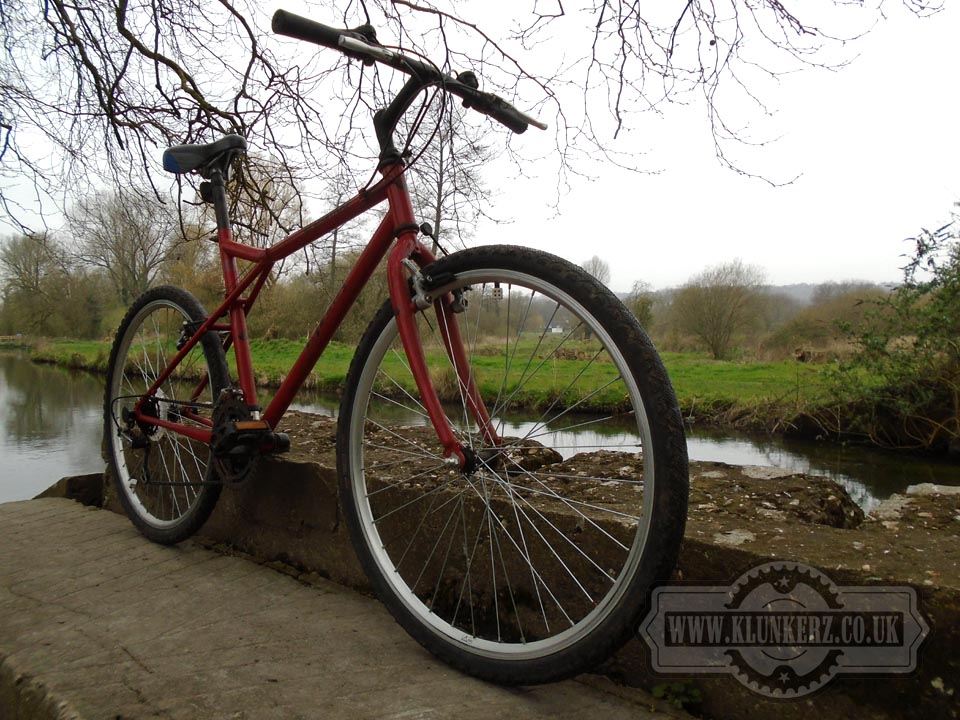 Like I said before, all in all I'm quite happy with the Daewoo Genius, but further fettling is required. Not a complete strip down, just further tweaking, almost as much for the looks of the thing rather than anything else. 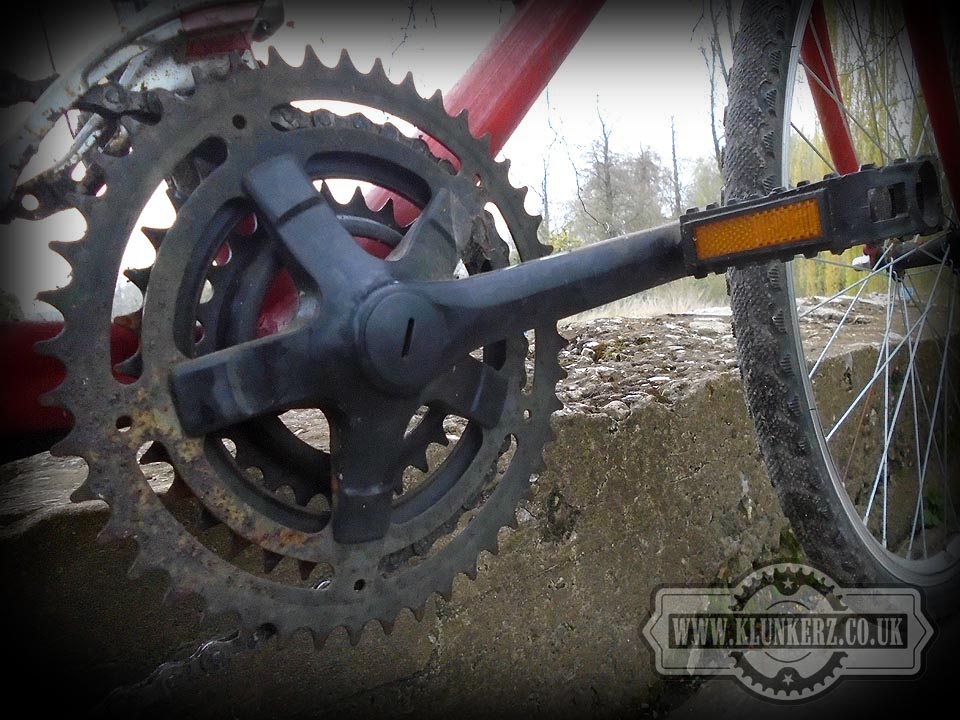 I didn't originally plann to to change the chainring and crank, however, recently an Emmelle Classic 300 came into my possesion and it was fitted with a Shimano Biopace chainring. These have a reduced chainring diameter coinciding with the cranks being horizontal which is supposed to smooth the pedaling action, and allow the rider's feet to carry more momentum through the power stroke. By having it smoothly removed at the bottom of the stroke rather than encouraging riders to push bigger gears this supposedly reduces the risk of knee damage caused by higher knee joint loadings. I really don't know if that's true, or if there's any benefit to these, but it's kinda cool in my eyes, and is probably in keeping with the era that the Daewoo was produced. Therefore I plan to pop the Biopace crankset on to the Daewoo for its historical accuracy, its novelty value, and definately it's retro-cachet!