May 10, 2018
Today started with a run to the local tip in order to clear away a load of rubbish. I wasn't in the mood for picking up, as right now I have more than enough bikes to play with, and in all honesty I need to get rid of a lot of projects. I did, however look at the selection of bikes that were on offer, and there were some that I quite fancied, but I was trying to stay strong, and not have anything! Then, just as I was about to leave, the fella in the car next to mine started to unload this from his boot... 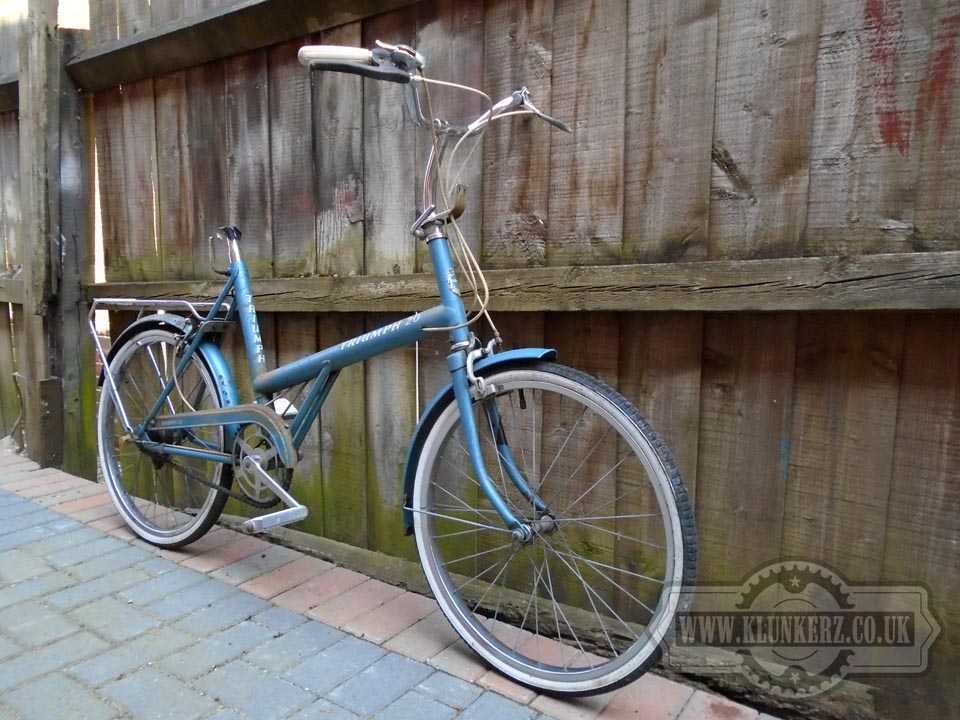 Having a bit of a soft spot for old Triumphs I asked him if he was dumping it? He said he was, so I said, good, dump it in the back of my pick up! Which he did! This did not please the staff at the tip at all! Apparently, once it touches the ground in the tip it's theirs to sell! I said that, that sounded fair to me, and as the fella had lifted it straight out of his boot, and put it straight into the bed of my truck in one move it didn't touch the ground! Therefore it was his to give away! They were still complaining when I drove out the gate! So what have we got? 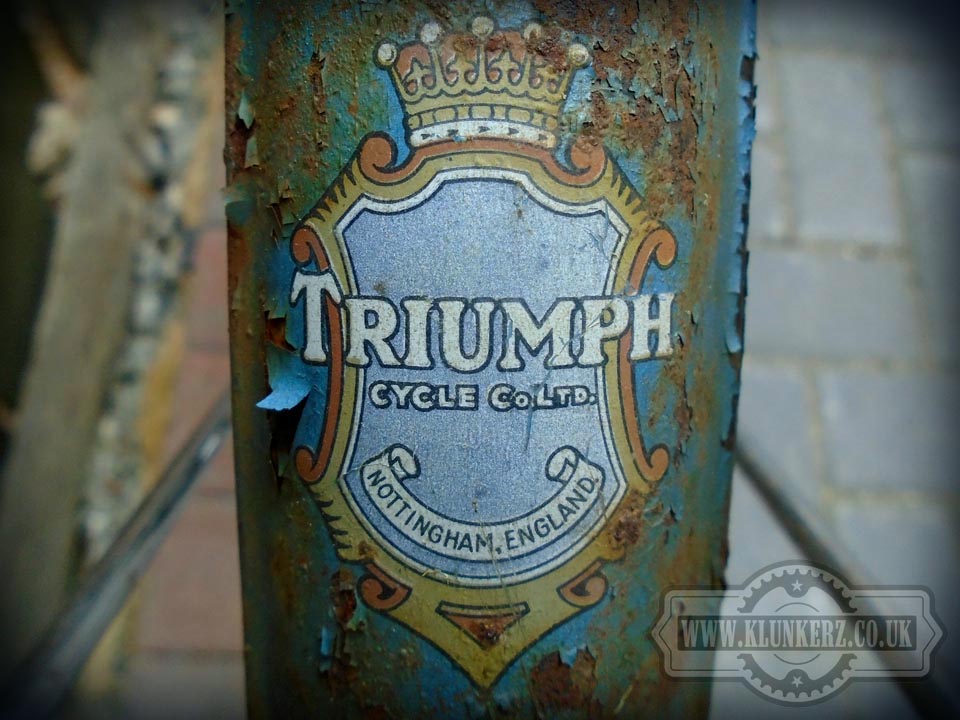 Well as previously mentionned it's a Triumph, and it's in pretty good shape! Obviously it does have a little bit of rust, or as it's fashionably known these days, patina, but apart from that it has no real signs of any damage! 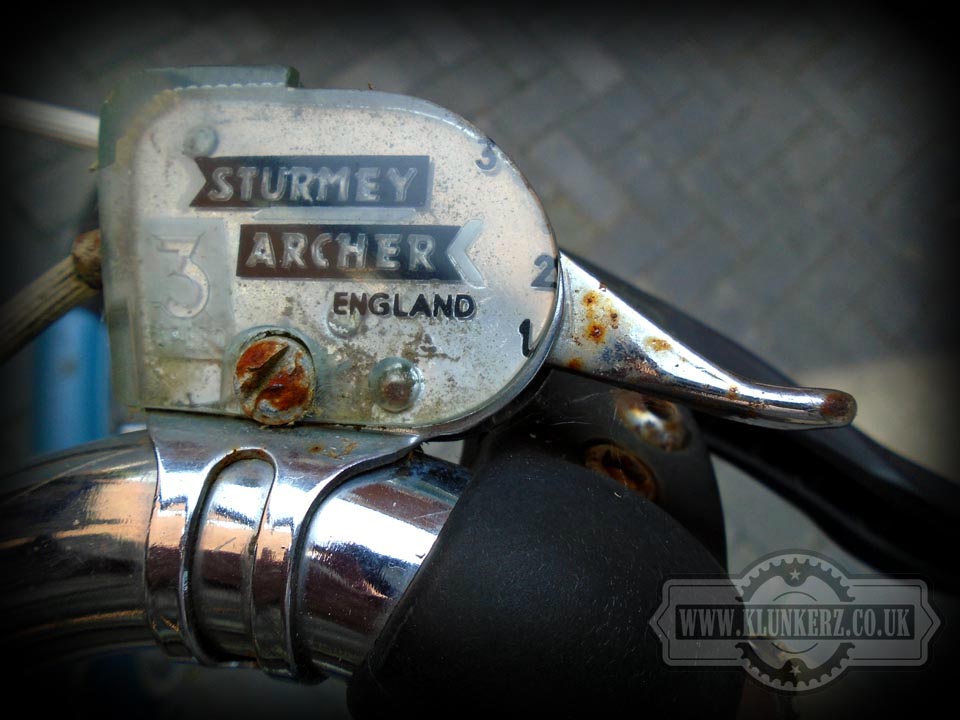 As most bikes of the time were, it is fitted with the rather splendid Strurmey Archer three speed hub, so that will give it the soundtrack of my childhood as I ride it along! It also has, at some point been fitted with a rather nasty plastic brake lever! I've been trying to over look this, as my plans for the bike are to just sell it after a bit of a ride around, but the thing is that brake lever just doesn't look right! 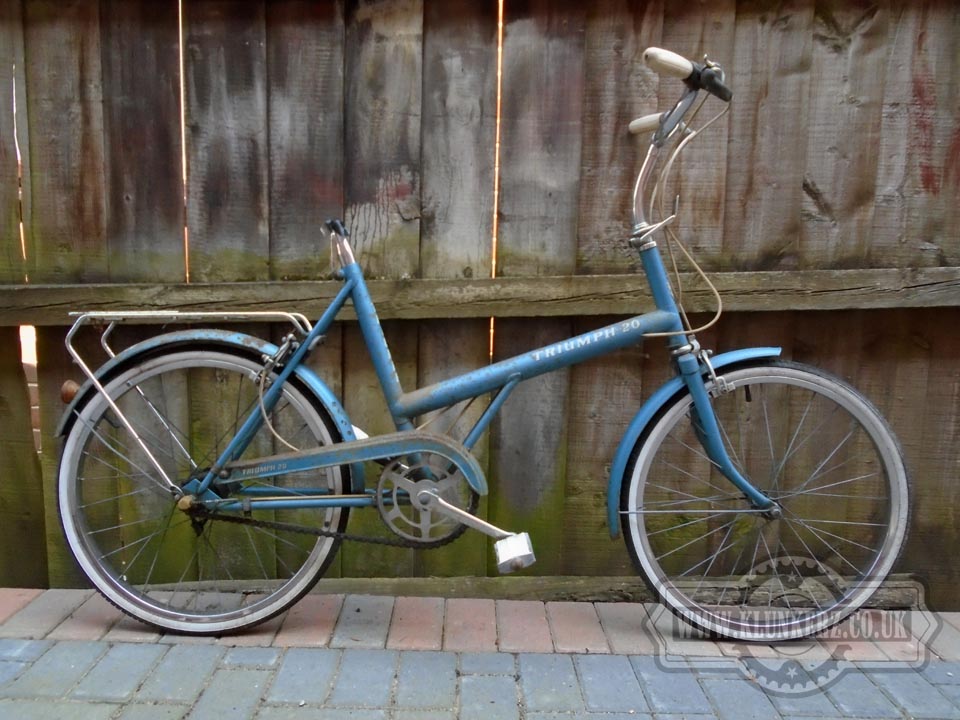 The only real downside to my little free Triumph that I can see at this point in time is that it's missing its saddle. Not the worst thing in the world, but I feel that riding without it will be a real pain in the ass! I'm pretty sure that I can sort out a saddle for it, however I'm also pretty sure that, much like that plastic brake lever it will be the wrong saddle for the bike! 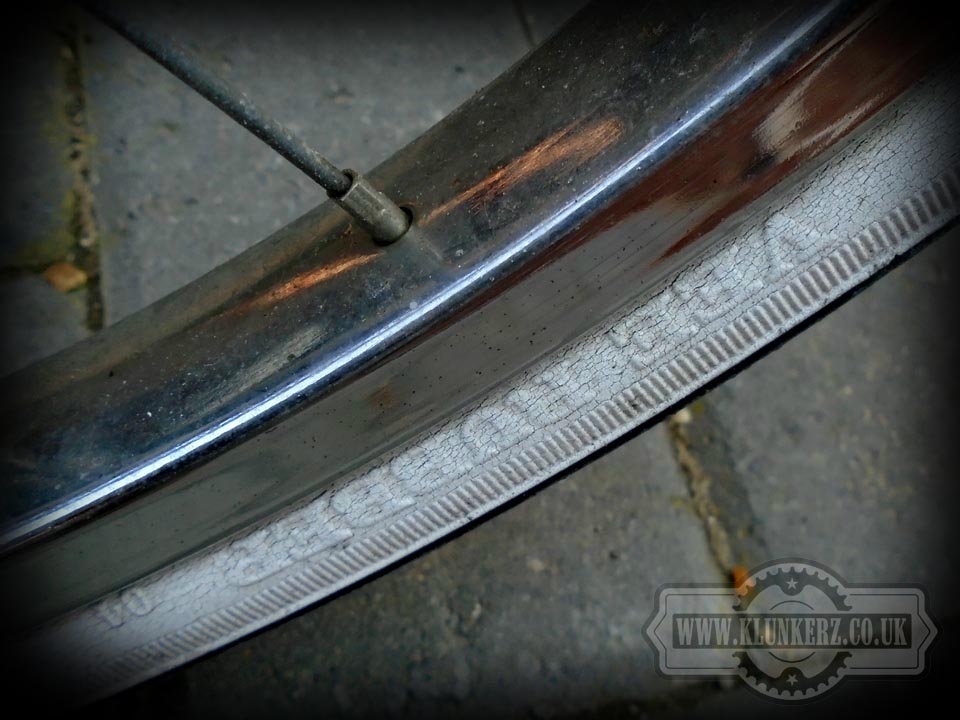 I would say that the wheels are the original wheels and they really are in good order, there are a few small rust blemishes, but really, nothing to complain about, and they're good and straight! I reckon that a good going over with Autosol and they'd probably be looking like new! The tyres I would doubt are original, as Vee Rubber wasn't formed until 1977, and I believe that this Triumph 20 was made nearly eight years before that. 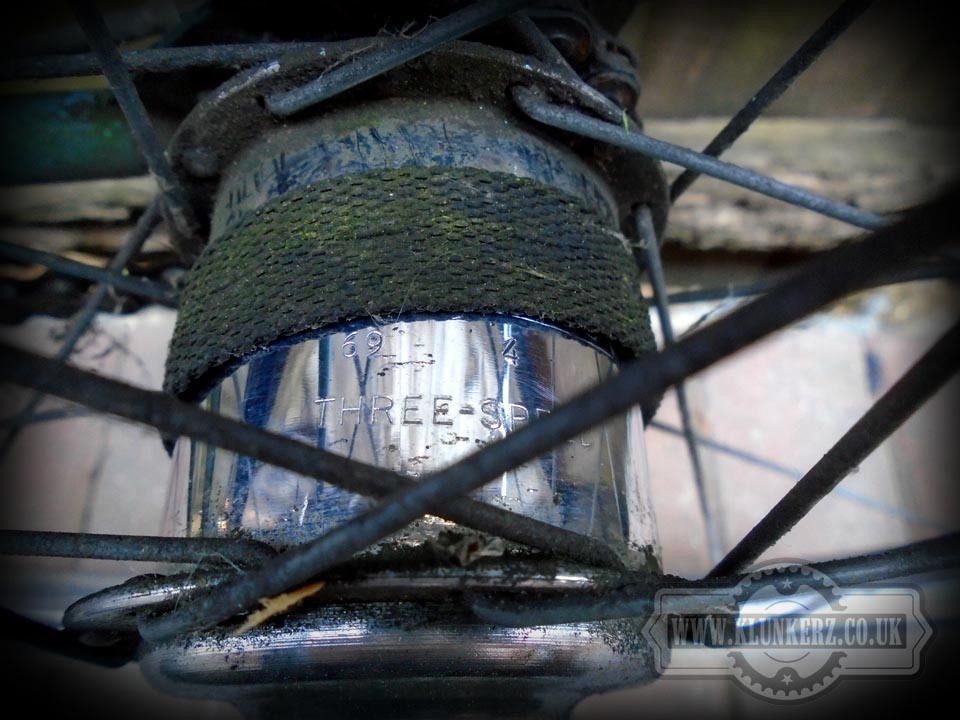 As the date on the Sturmey Archer 3-speed hub suggests that it was made in April 1969, and although no doubt the hub is slightly older than the rest of the bike, its very unlikely that it's going to be eight years older. 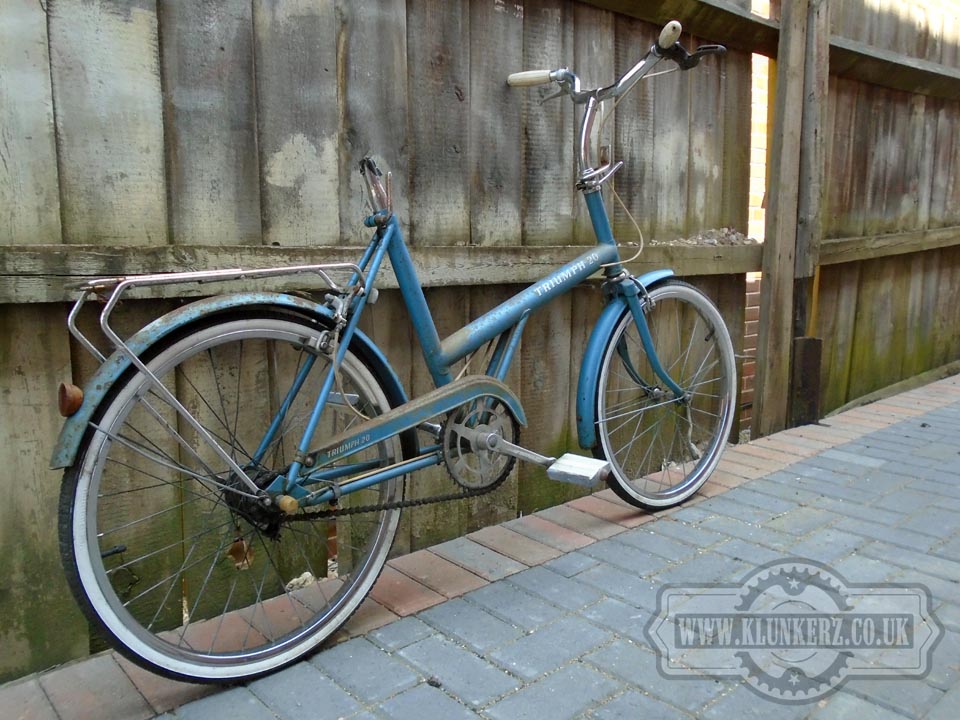 Whoever the previous owner was, I think it didn't spent too much time outside in the rain, as pretty much all of the chrome work is in good shape. It's also quite well lubricated, infact apart from the missing saddle I would think that it's ready to roll! 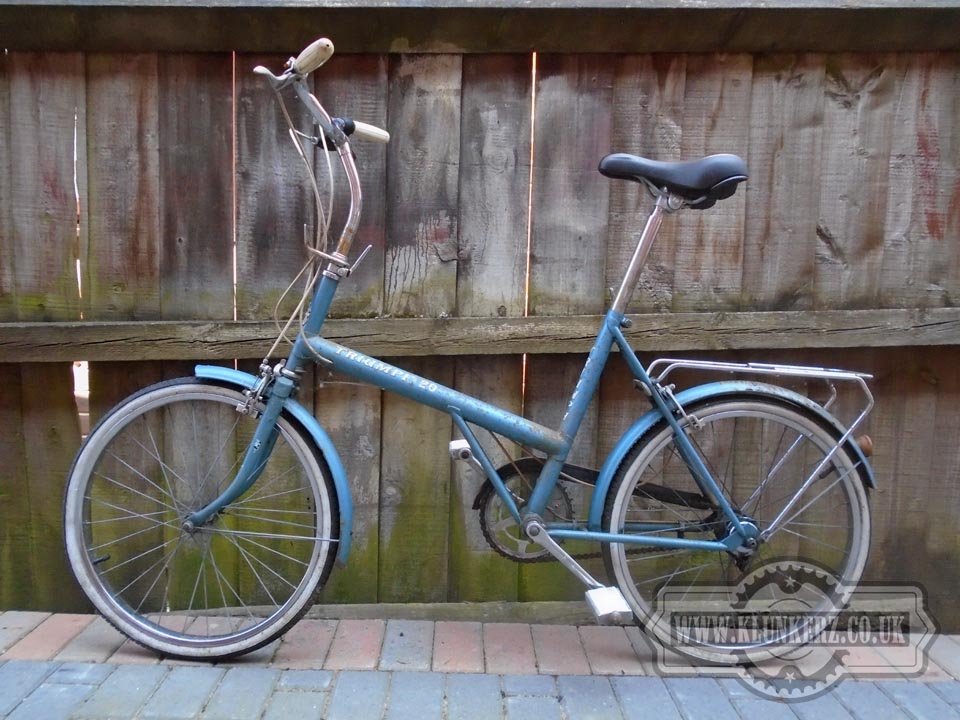 So with a saddle dug out from my stash and popped on, I think a test ride might well be in order. Hopefully at some point over the weekend I'll get the chance to take it out for a bit of a run. I quite like how it looks, and I like that it wears its patina well. About the only thing I don't like is the wrong era brake lever and saddle. I think if I can find an old style steel brake lever, and a white saddle it will pretty much be perfect. But so far both of these items elude me. I think I'll give it a couple of weeks, if I can track down a brake lever and saddle for it I'll pop them on, if not, then I'll probably sell it as it is. But first things first, let's take it out for a ride!