May 25, 2018
Well, I've had this thing for a really long time now, and I decided the other day that it was high time it belonged to somebody else. 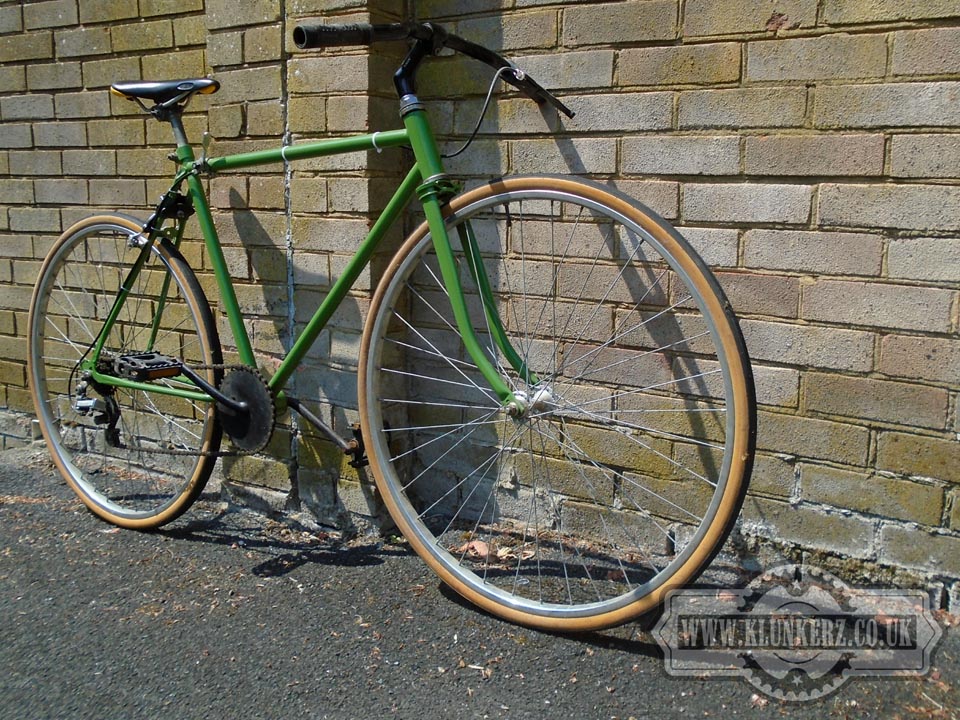 I thought about selling it not long after I brought it home, however to me it was such an interesting little bike that I really wanted to know more about it. The trouble with that is that I wasn't able to find anything else about it. I wanted to know who it belonged to, who made it, and why, not long after it was put together did it go into a shed never to see the light of day again for years, or maybe even decades? But I got nowhere with my internet searches, and nowhere by asking people about it. People I asked all thought it was an intersting machine, but no one had any more ideas of it's origin than I did. 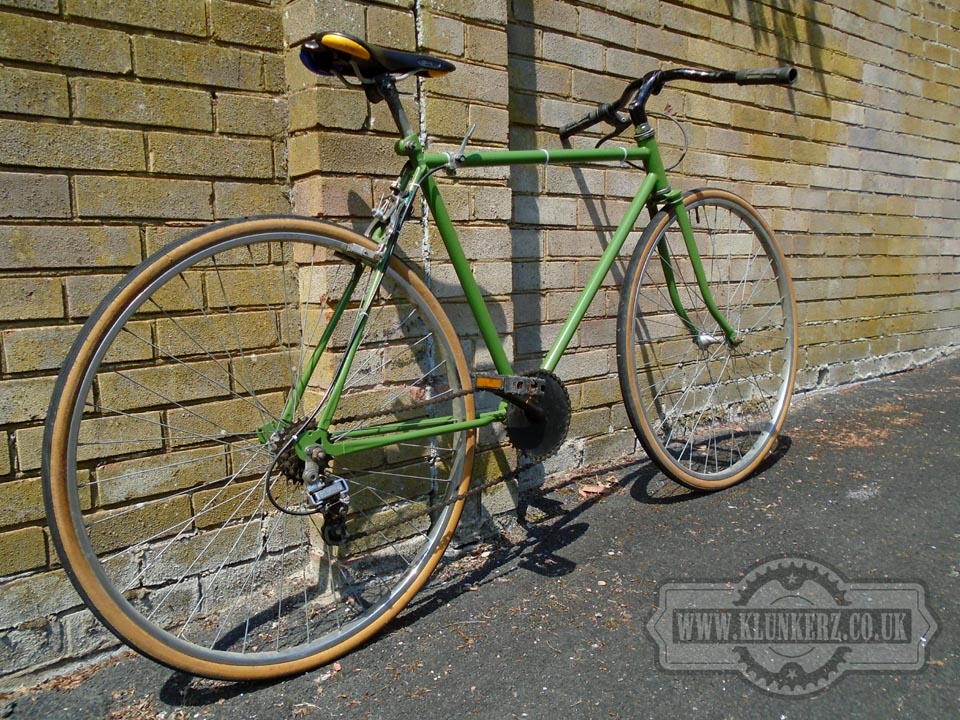 For a steel framed bike it was extremely light, and the tubing used was quite a small diameter. The paint on it was in exceptional condition, which makes me think that it was abandoned not long after it was completed. 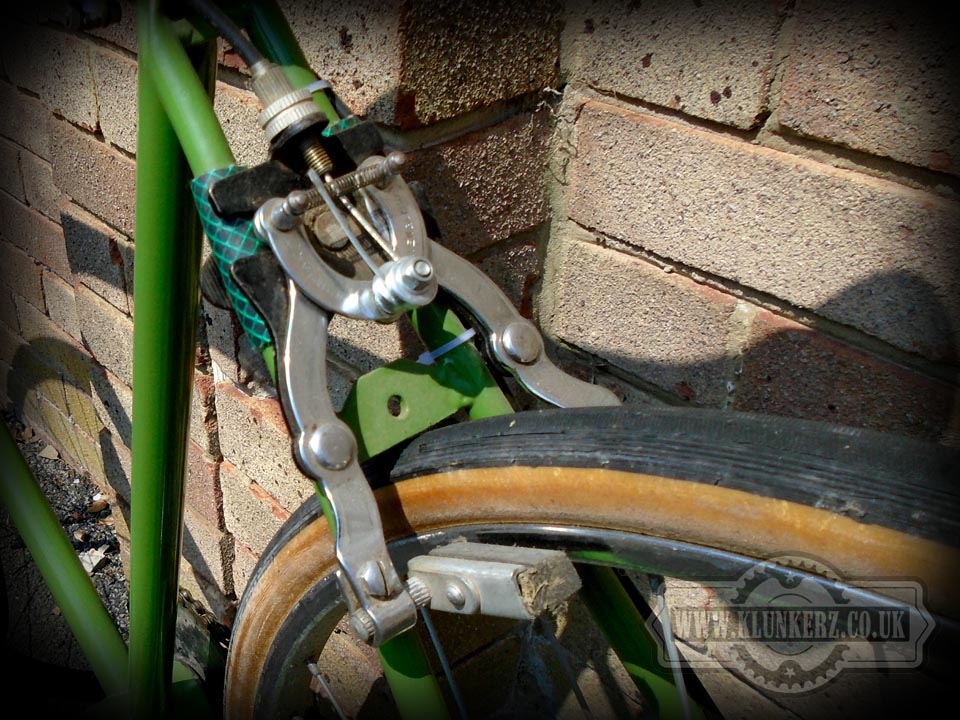 It only had a single brake on it, and that was on the rear wheel. I have no idea who the manufacturer of this brake was, or is, but much like the rest of the bike, it's quite unique. I have never seen one like it before, at the other end of the brake cable was this... 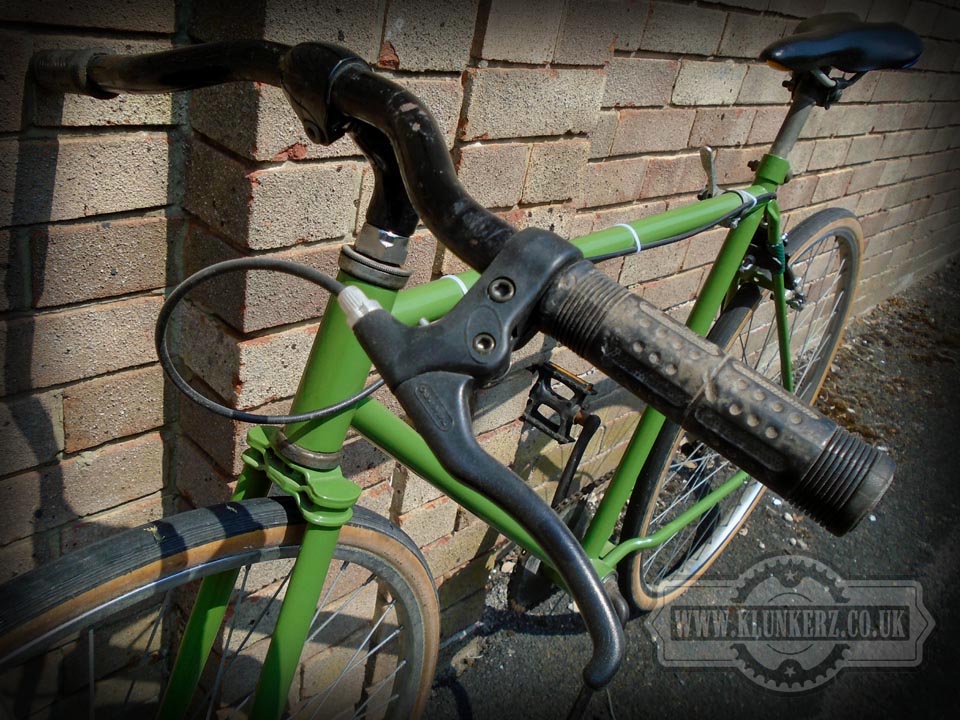 A very cheap Tektro plastic brake lever. This I found quite puzzling, as I would say that the bike was probably put together in the early seventies, but this brake lever, and for that matter the stem and possibly even the handlebars are much later, probably twenty years newer than the frame looks. I would say all of that little lot came straight out of the nineties, a little bit odd when you look at the frame, and the 27" wheels and tyres on the thing. Surely by the nineties you would have used 700c wheels and tyres if you were building a bike like this. 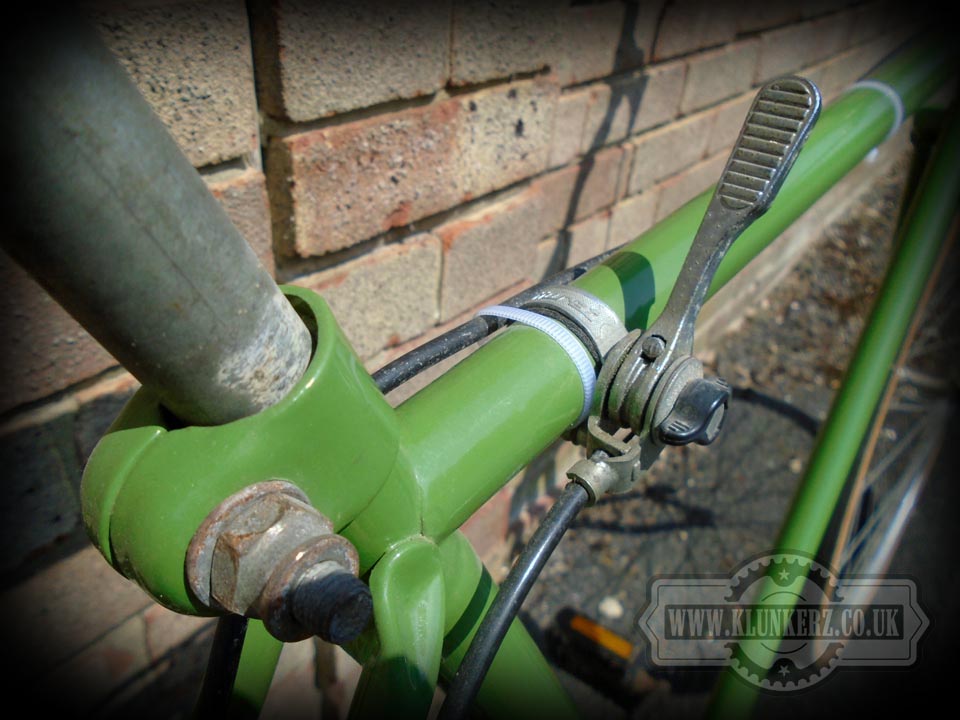 Another oddity in my book was the placement of the gear lever directly under the saddle. I can't really see a benefit to this, and infact I can only see that it's placement there would be detrimental to your riding pleasure. Why not put it at the front of the frame like it usually is on a racing bike? Who wants to be fumbling around between their legs when they're riding along? I dunno, but unlike the brake levers etcetera I would say that this Huret gear lever probably is in keeping with the era of the rest of the frame. 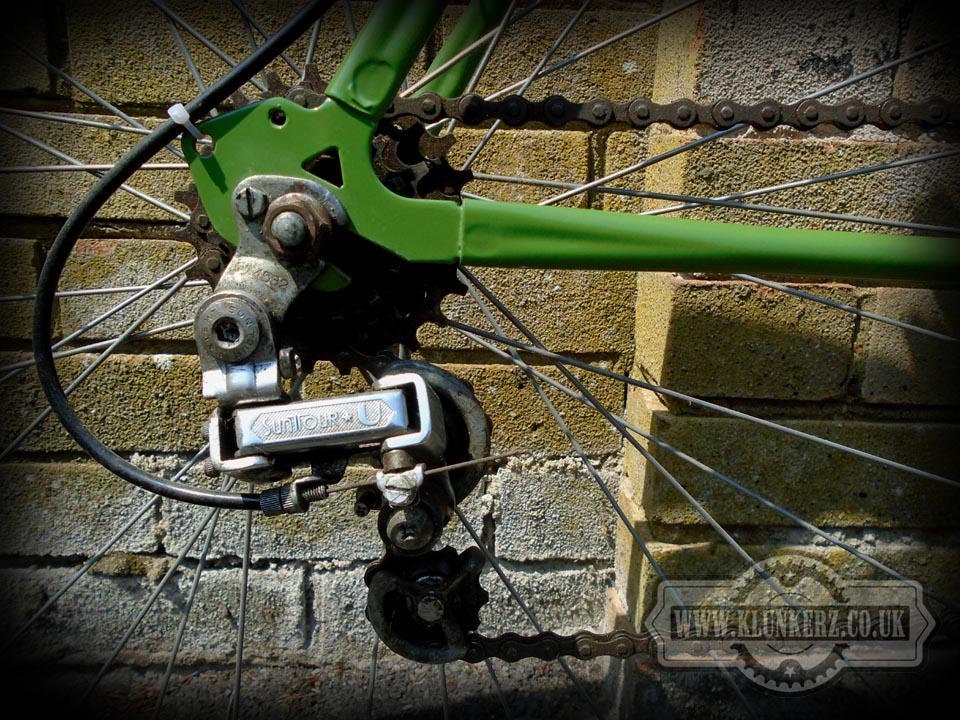 About 18" away from that gear lever was a Suntour derailiur, again, probably about the right age for the rest of the bike. This worked well, and selected the five gears on the rear cog beautifully. 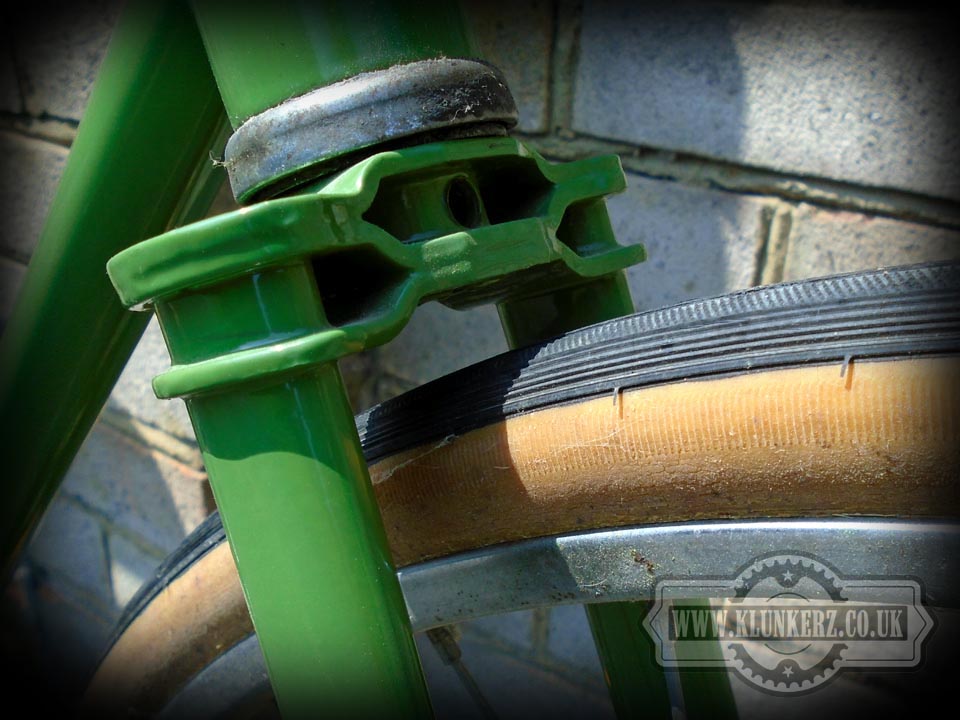 But the one feature of this lovely little bike that I did really like was the front forks. That little detail at the top of the forks, formed from flat steel looked just fantastic to me. I guess this is probably because I've not any forks like it before. I must admit I wonder just how strong it is, but it's probably strong enough, I'm guessing that whoever put it together knew what they were doing.

Anyway, after trying to research its origins and getting nowhere for ages I decided to let it go, and it is now in the hands of it's new owner. But before they collected it, it suddenly dawned on me... I've not even ridden it yet! 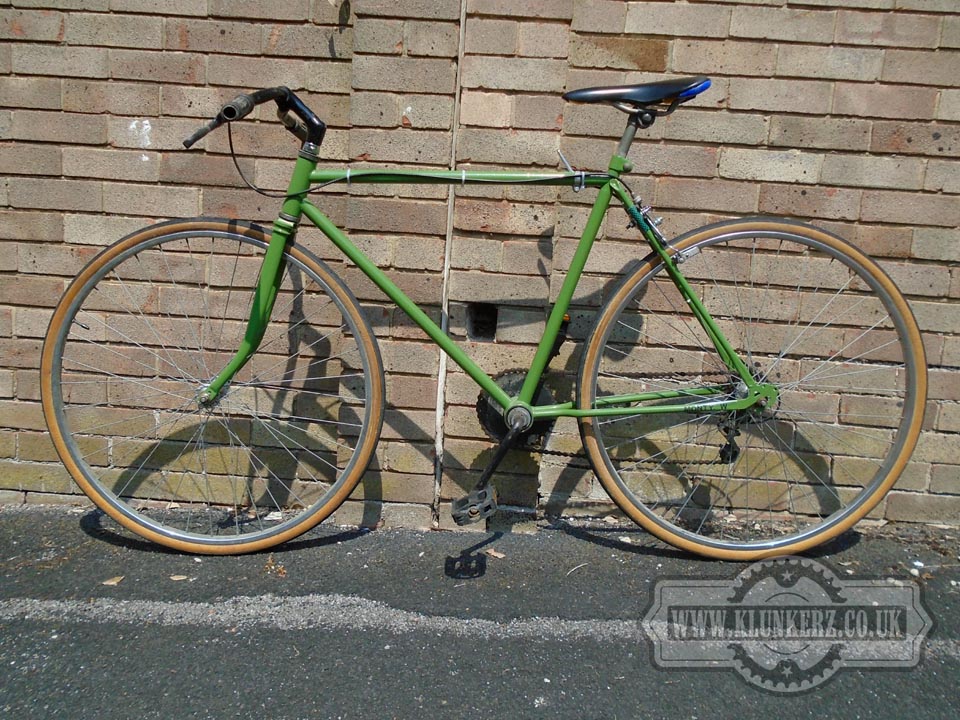 As I'm sure you're aware, I'm no racer fan, but I figured that I would at the very least take it around the block! I got on, and off I went. The funny thing was that it was really comfortable, the seating and riding position, although probably the classic racing bike position was actually quite nice. I didn't feel hunched up, or uncomfortable at all. In the end I didn't just go around the block, I did a couple of miles, and to be fair, I could've gone further. At this point in time I'm actually wondering if I could replicate the riding position on another bike. I was really surprised about how it rode. That single brake lever and mechanism worked very well, and even managed to stop my lardy ass quite quickly as I rode down a hill. Gear selection however was as odd as it looks with that gear lever tucked under the saddle. However the gears worked perfectly, and although it's only a five speed, that was more than enough.

About half an hour after my little ride the new owner came to collect his bike, and although I was actually a little sad to see it go, he seemed very enthusiastic about it, so I feel it's probably gone to the right man. I was glad that I did get to ride it though, and actually I wished that I had ridden it sooner, but being a racer type bike I was put off of riding it, with the exception of this one I've never found a racing bike that I've enjoyed riding! Although maybe this is a little more café racer than proper racing bike, and maybe thats the key. I dunno, but I do still have one question though... 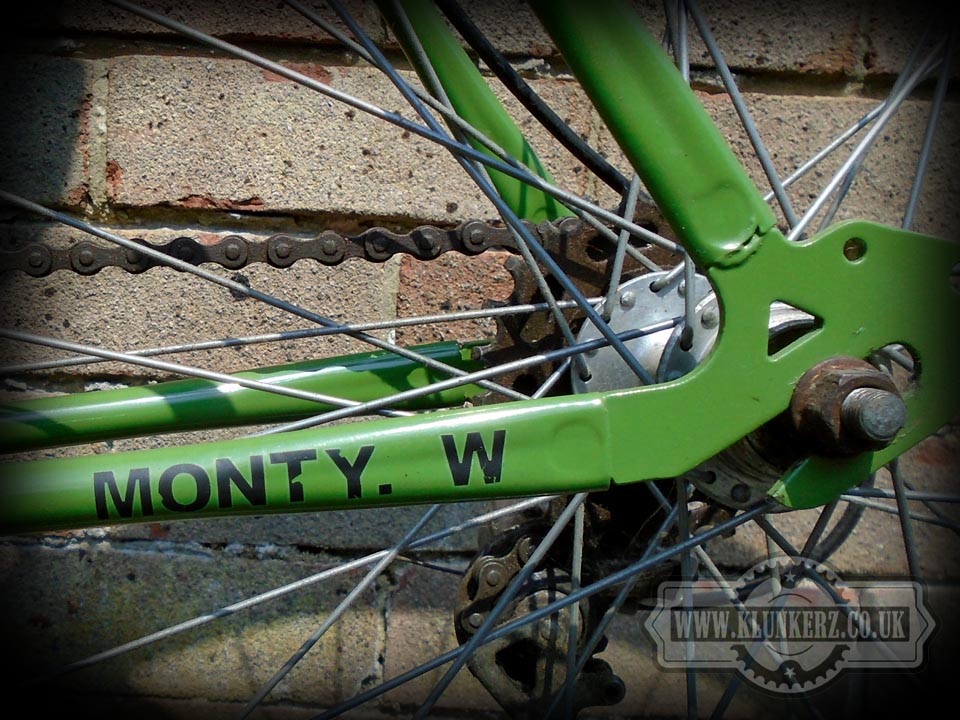