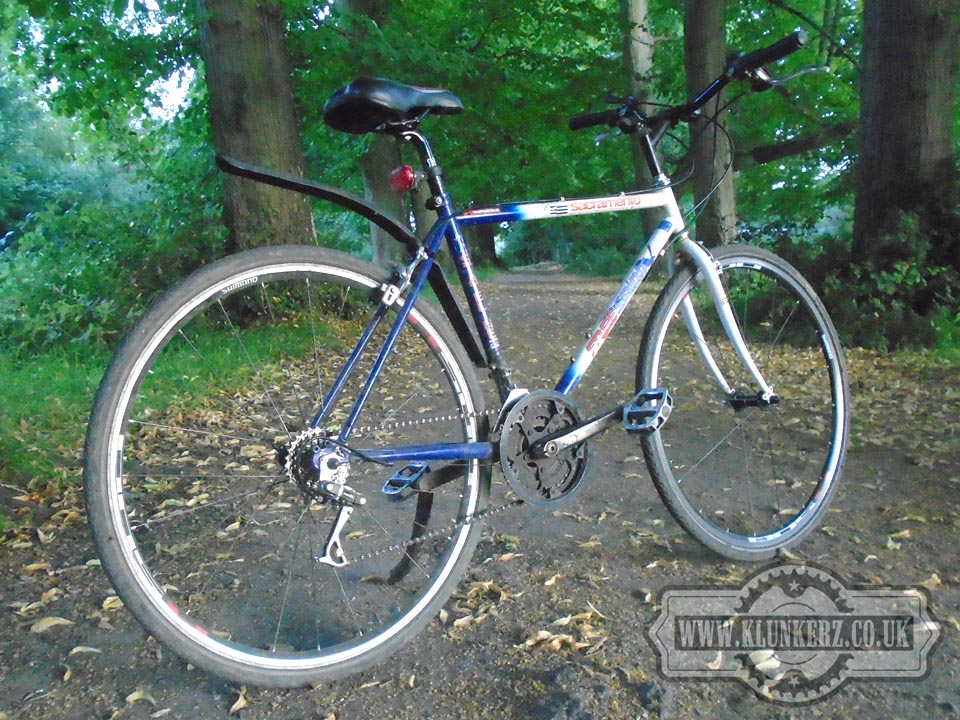 This is now nothing like the bike I started out with! Infact I think the only thing left of the original bike is the frame and forks! I started by trying to add a few period pieces like gear levers, brake levers, grips, and even handlebars. 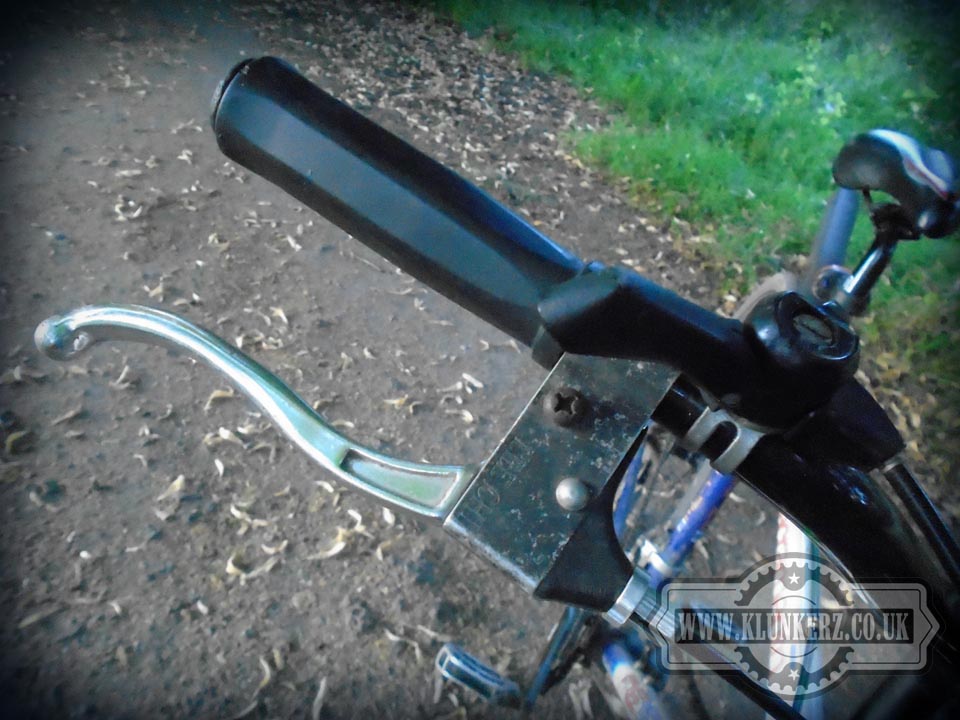 But then all of the ideas of putting together a nice looking period mountain bike went out the window when I found a pair of 700c Shimano wheels complete with tyres at the tip! 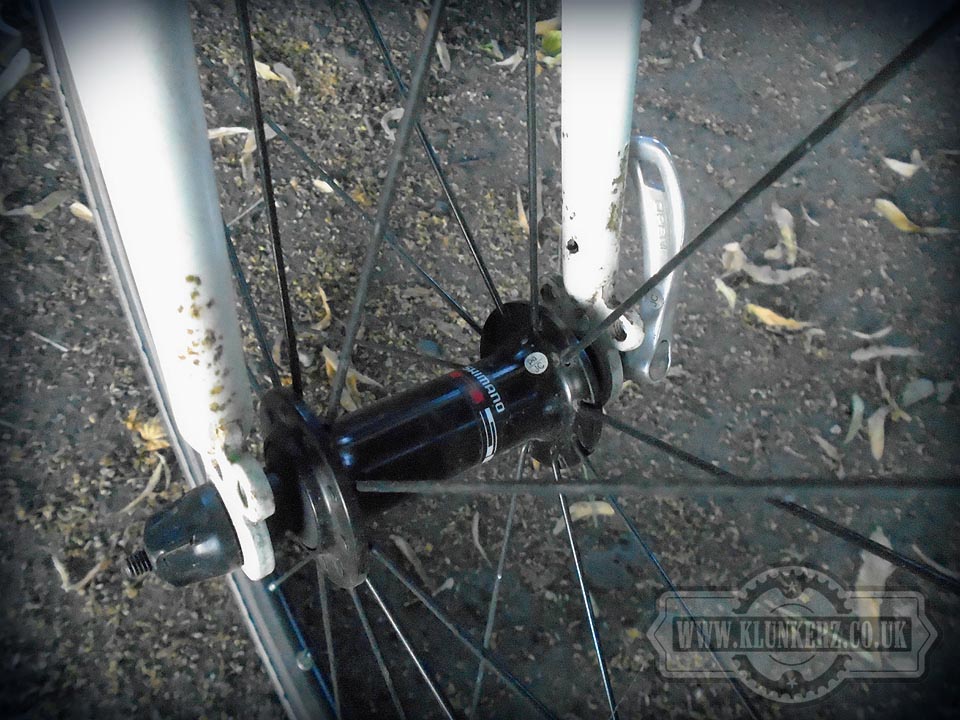 My feeling is that although these may not be the best wheels in the world, they were probably fairly expensive, and they're pretty damn nice! 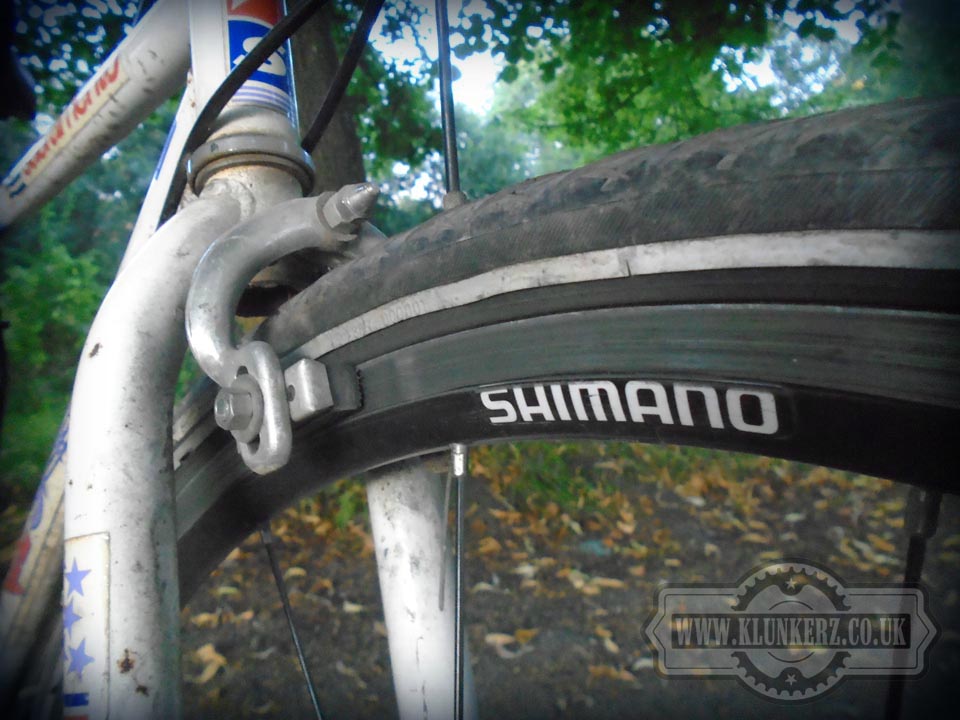 Because the original calipers were rusty, crap, and with the 700c wheels too big to move the brake blocks up them far enough so that they reached the rims I dug through my stash and found this rather nice pair of aluminium calipers. I've no idea what they came off, but they look good, and do a pretty good job of ratarding forward motion... Even with a lardy arse like me on board! 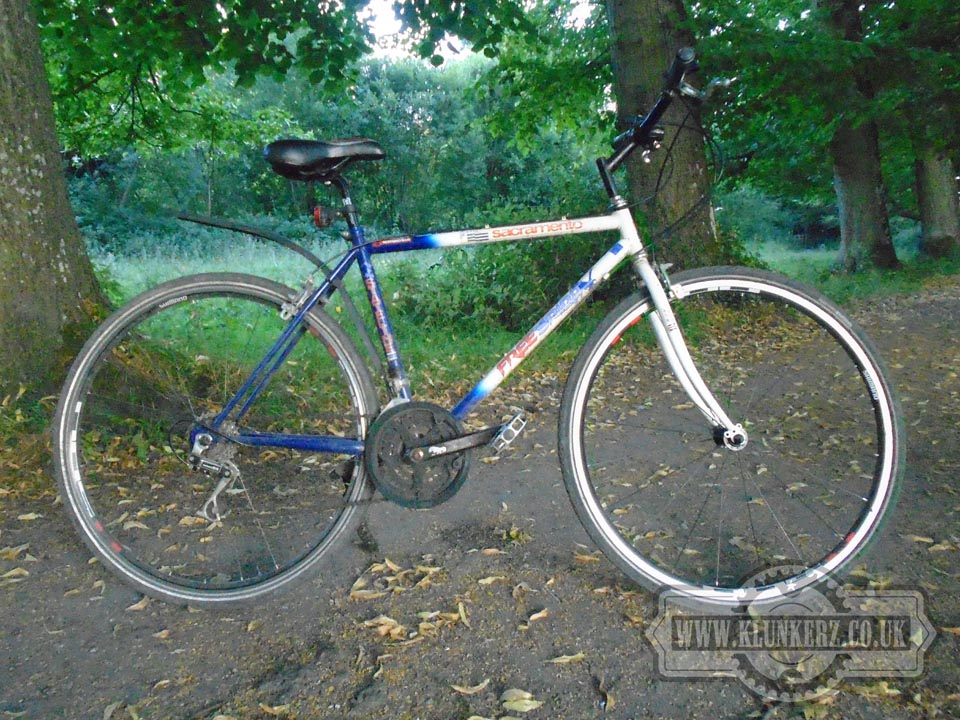 I must admit that I do quite like how it looks, and to be fair to it, it rides very well too. Although it is still very heavy, and this is because of some of the parts that I have added. Namely, this part... 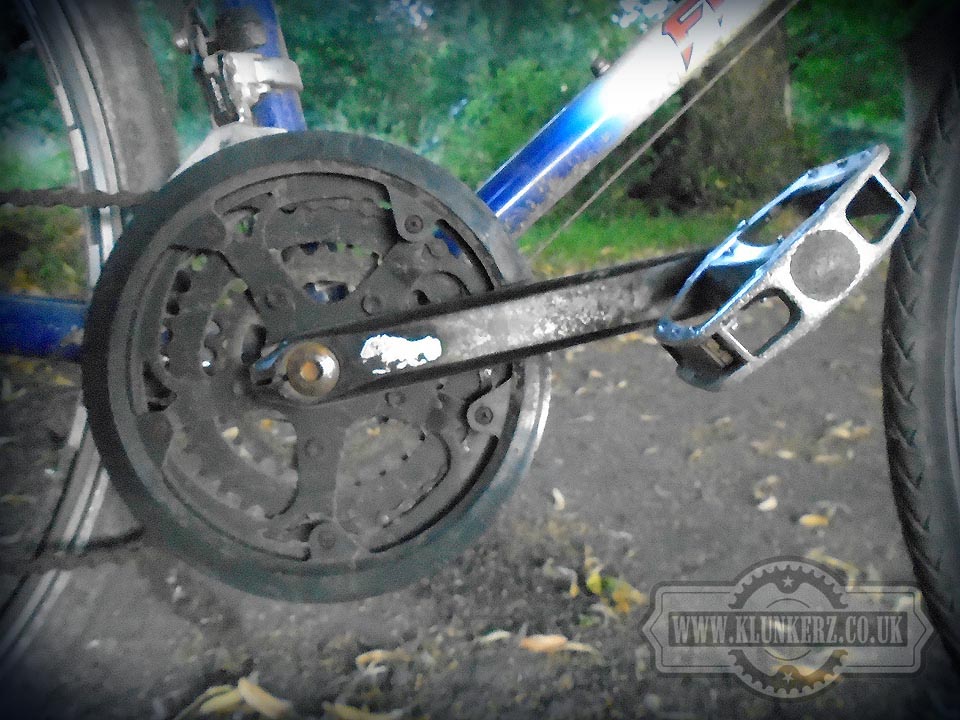 The crank! This is extremely heavy for what it is. It's a four piece crank from a BMX and I think that the arms are actually cast iron! I think the crank alone weighs atleast as much as the frame and forks! But no matter, every time I see these four piece BMX cranks I want them for my own use, I just think they look so much nicer than the two pice cranks that cheap mountain bikes and BMXs came with. Plus, surely with that weight revolving the rotating mass acts like a flywheel on a car and once I'm actually peddling it helps with keeping the pedals go around, therefore making the peddling easier... No? Ok then. Well I figured it was worth a go! 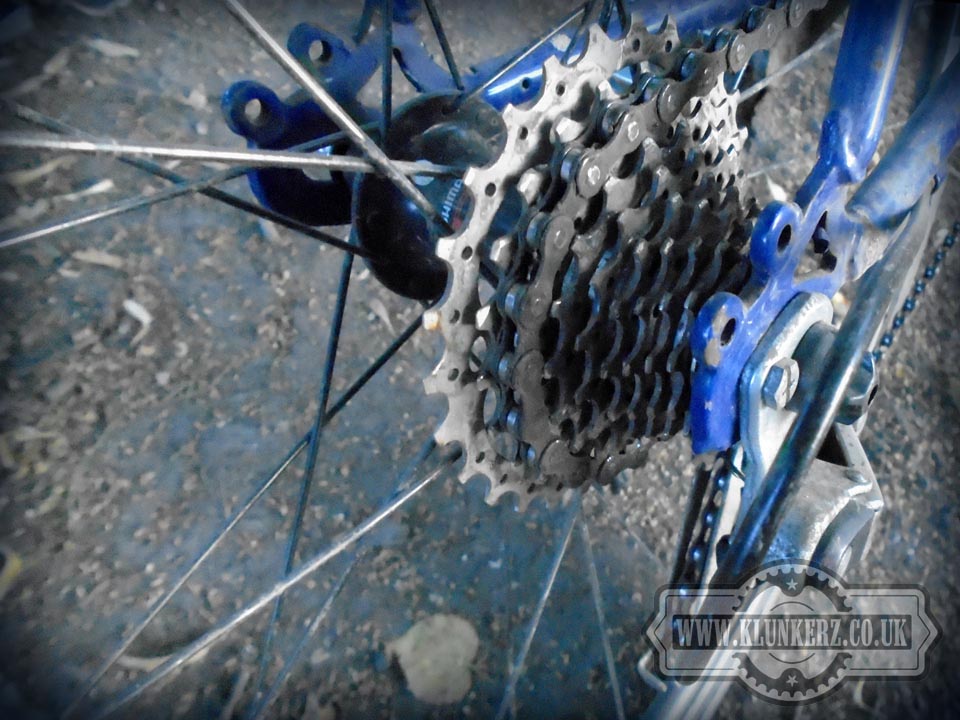 So what does it ride like? Well, it rides very very well indeed. I'm guessing that this is mainly due to those wheels, but it's so smooth to ride. It goes pretty fast, and it stops pretty quickly too! Admittedly it's probably no good off road now, but along the cycle path it is just lovely! It really is a joy to ride. I'm going to go as far as to say that this is the best bike I have built in a very long time. I don't think that there's anything I would change about it, apart from maybe the frame size as I like a larger frame. Since building this I have been looking into Freespirit bicycles and it would appear that they are still making bikes, and by all accounts they are affordable family bikes too. The trouble is, on their website they give no indication of price, or where I can get my hands on one. This is kind of a pity as they do a hybrid bike called the Discover which is available with a 21" frame, which if I could find someone nearby who sells them I would like to go and have a look at one to see what it was about. Perhaps do a little comparison of the old one I've got, and the new one. However as of yet I am unable to find a stockist near me. Which probably isn't a bad thing as really it probably wouldn't be a very fair comparison as my Sacremento was put together with parts by me, for me, and the Discover is put together by the factory to appeal to the masses. But still, I'd quite like to see what they're like now. But until the time comes when I can find a stockist I think I shall just continue to use and enjoy the Sacremento, because frankly as the saddle states, it is... 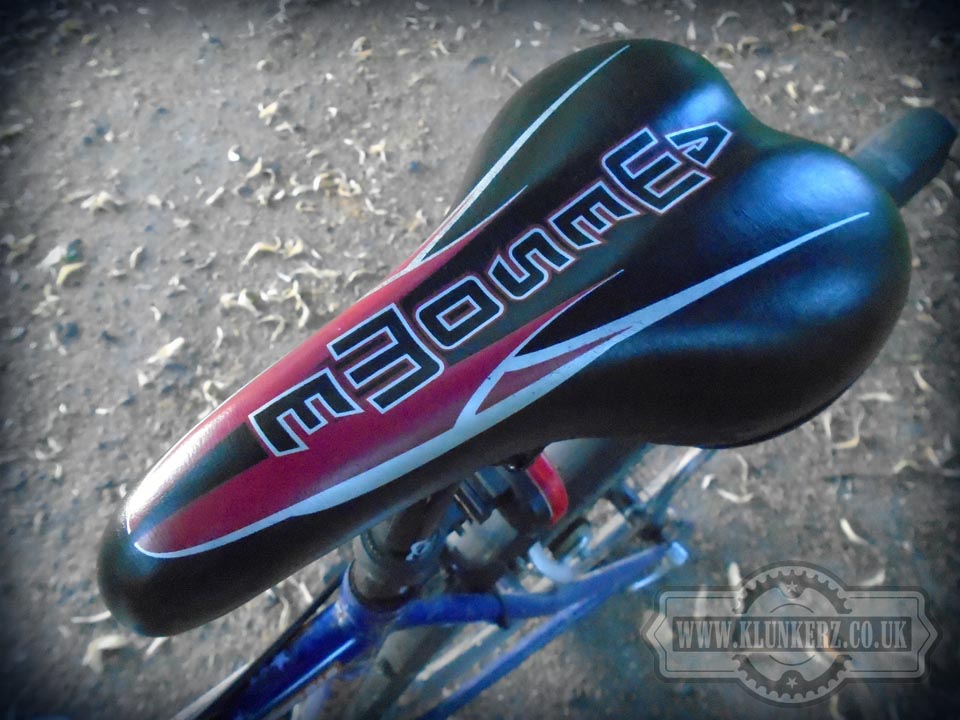