October 16, 2018
It's not finished, I thought it was, but it isn't. I also thought that this would be a pretty quick build, just sourcing all the parts from my stash, and piecing the Palm Beach together. But as I started I sort of went off in another direction. I knew it was never going to be pretty, but that was fine, I sort of wanted that discarded, and unloved look. I hate the term, but I wanted it to be a bit of a rat-bike, y'know, look rough as nuts, but built with good parts and rides really well. So far, this is what I've got... 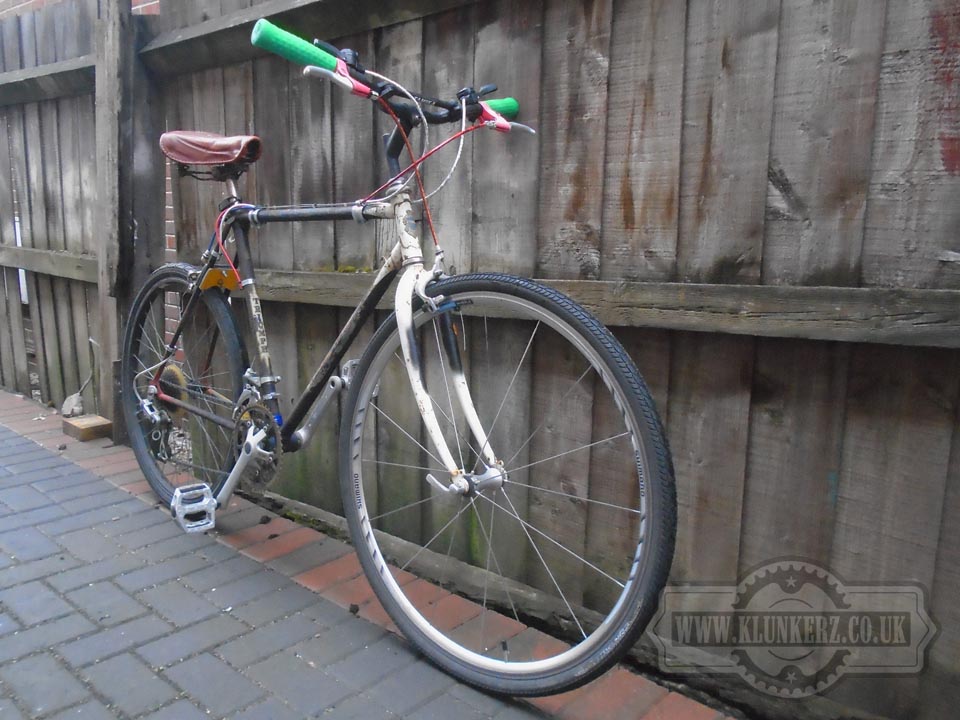 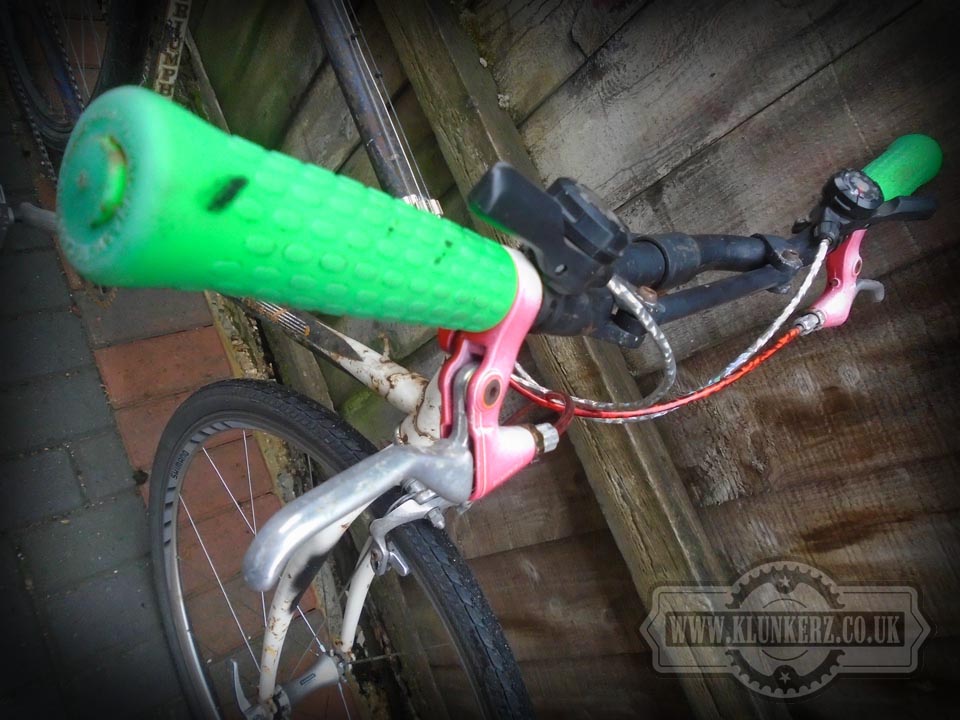 It started off well, I got all the parts together that I was planning to use, and yes, they were all black. I even started to put them on, and I got it as far as being all together, but just needing the cables running. Then it hit me, it looked pretty good, perhaps a little too good! Half the reason for building this bike like this was to act as a deterrent, nobody will be interested in stealing a bike that looks rough, no matter how it rides. The trouble was, that with all the black it looked a bit well cared for. Yes the frame and forks were rough, but even so, it seemed pretty evident that someone had gone to a lot of trouble to build it, and if they had, it was probably a good bike. I showed it to one of my bicycle building friends who thought that it was a rattle can paint job away from looking really nice. This was not the response I was after. Back to the drawing board, and the parts stash! Off came everything but the handlebars. I started again. I had bought some nice cable clips to hold the cables in place, but one day while I was dumping stuff at the tip I had another idea. There, in the metal skip was a bike frame, it was pretty beat up and dented, but it had some parts I thought I could use. I dragged it out, and out came the hacksaw. By the end of the afternoon, after a visit to toolstation I had new cable clips... 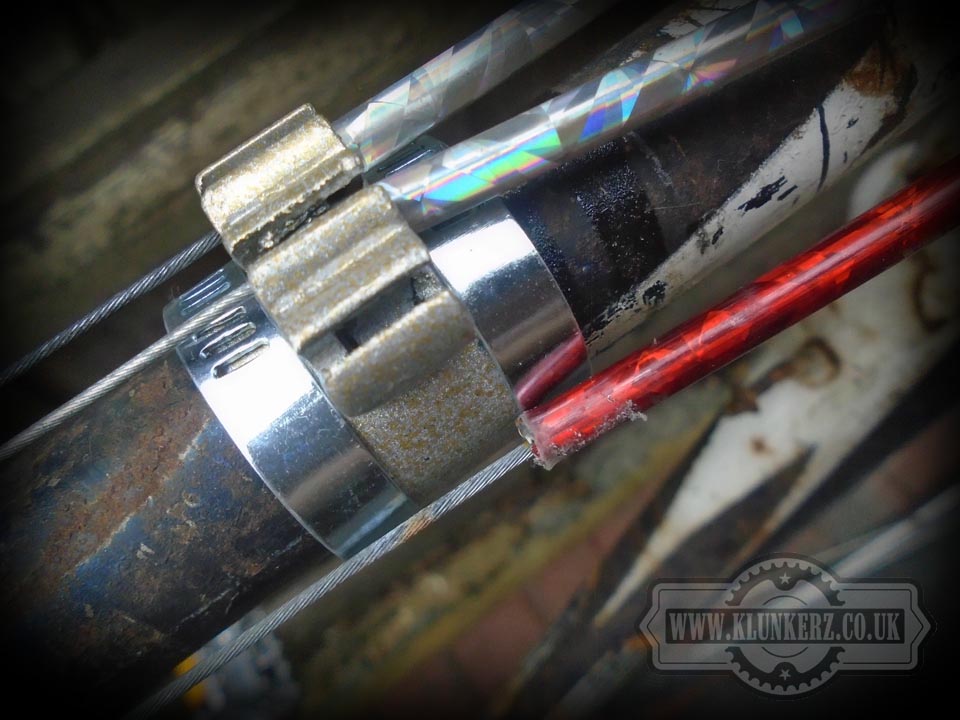 Yep I just chopped them off the frame, and tossed what was left of the frame back in the skip! 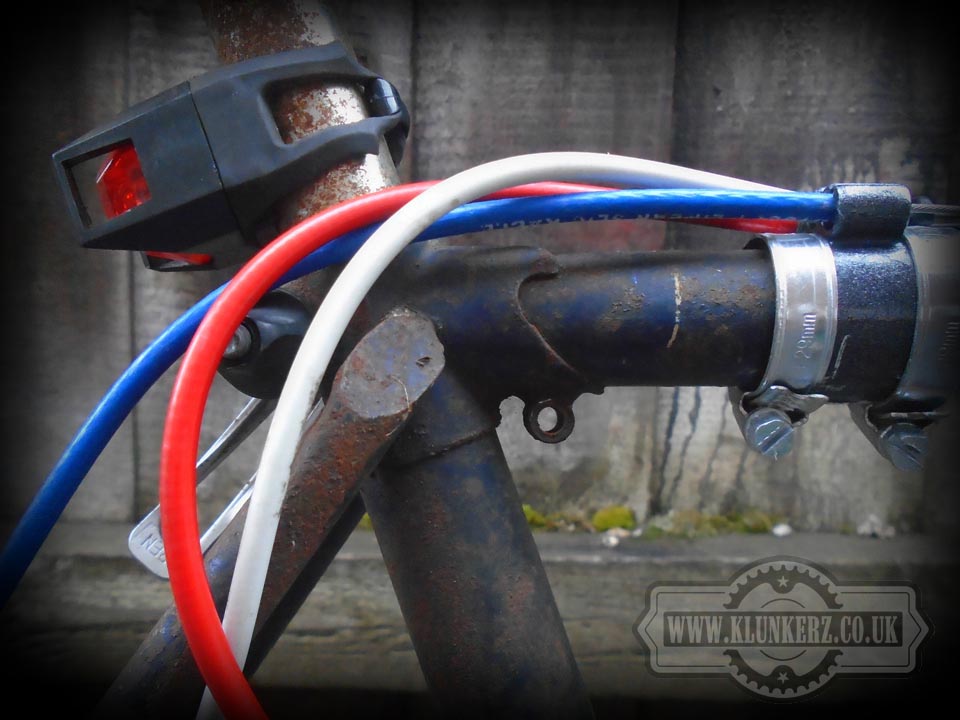 I had used the double sided tape that car manufacturers use to attach trim to the car body. I stuck it to the frame, then stuck the parts of the frame that I had cut up to the Palm Beach, lastly I wrapped a hose clip around them at both ends. The trouble is, I think that they've moved slightly, as I don't think I can get the hose clips tightened up enough before they slip on their threads. The other thing is that I think I've cut the cable outer too short, and so, when you turn tightly it pulls out of the cable guide as can be seen in the picture above. As you can also see, I didn't use black cable outers. I had these sparkly outers from a childs bike which I thought were kinda snazzy, plus it also makes it a bit less desireable... Hopefully! 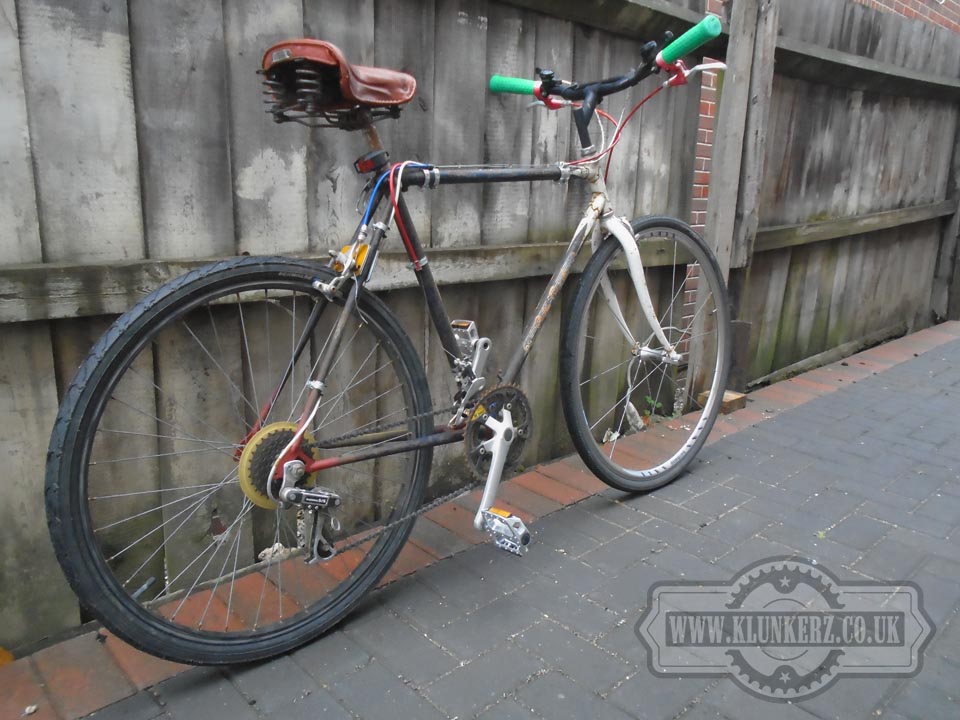 When I originally raided my stash for wheels my plan was to use a 700c wheel in the front, and back. However I didn't have a 700c wheel to use at the back, so as a temporary measure (sort of) I fitted a 26" mountain bike wheel. The thing is though, the more I looked at the odd wheel combination the more I liked what I saw. I even started to consider using a 24" mountain bike wheel on the back! Perhaps thats an avenue I'll explore if I ever try to build something like this again. Or if I hang on to this Palm Beach long enough that it gets another re-build in the future! 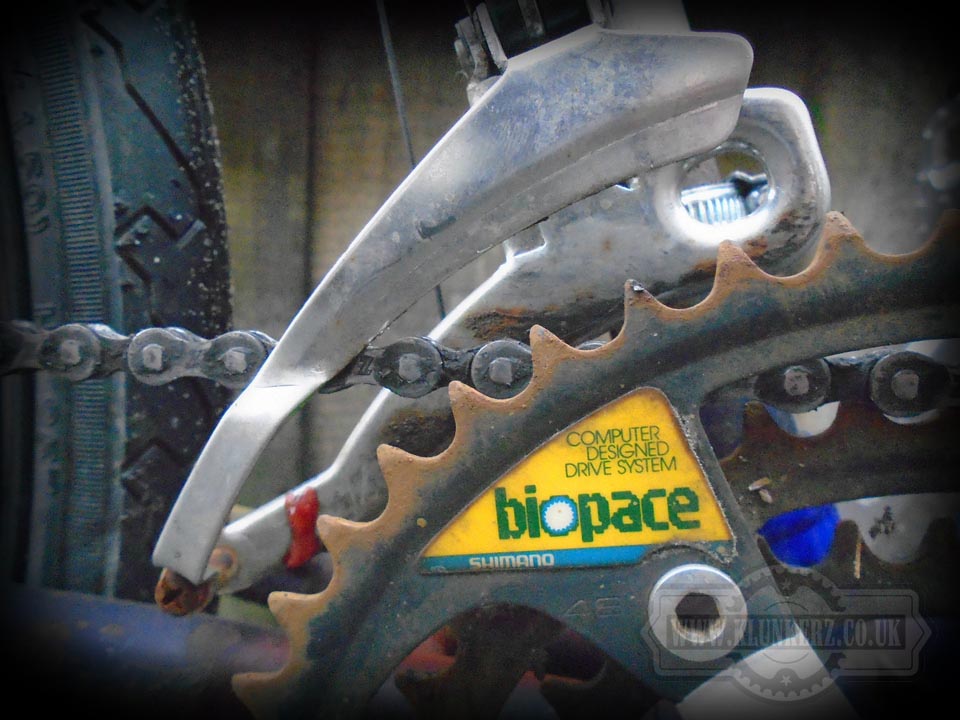 I found another old Biopace crank in my stash, and so I added that to the build. I'm still not sure that they really do anything, but I quite like them!  Plus, its a little bit rusty, and so it fits in with the patina of the rest of the bike. 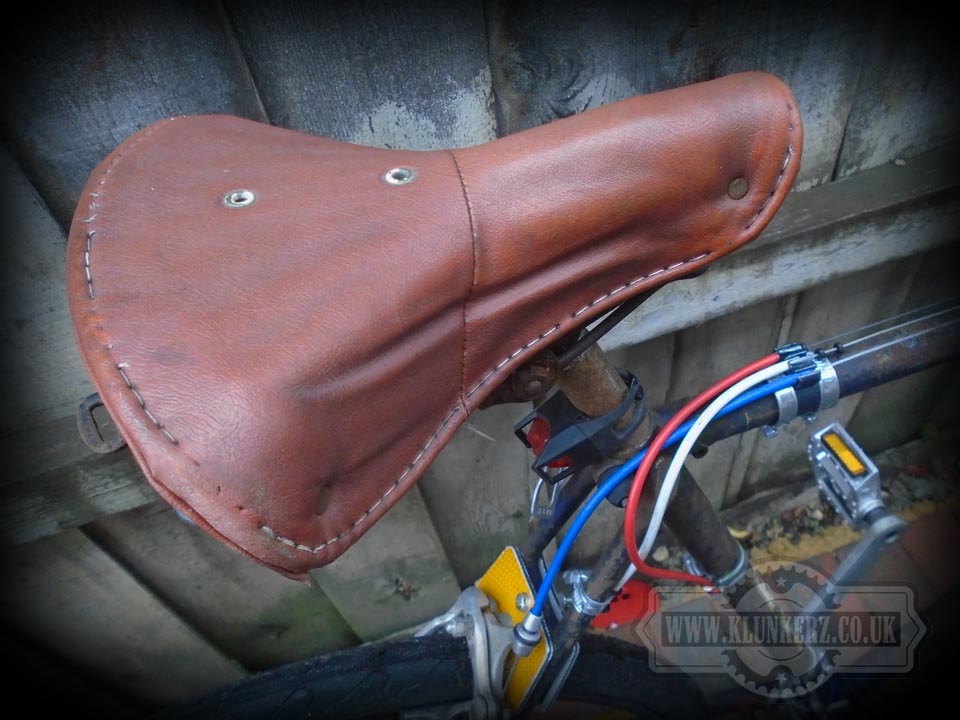 I'm not too sure where I got this saddle, but like the rusty Biopace crank I thought it suited the look of the Palm Beach quite well, and it does. However, my feeling is that this will be one of the parts that gets changed before its finished properly. It's a shape really as it looks right, and it's not even uncomfortable. The problem is that I can't seem to get it tight enough to stop it from tilting back when I ride. I tried moving it forwards a little so that the seat post is connected in the middle of the saddle, but that wasn't comfortable for me. It's a pity I've not got an old BMX lay-back style seat post! I'll have to keep a lookout! In the meantime I think the Daewoo will donate it's saddle to the cause. 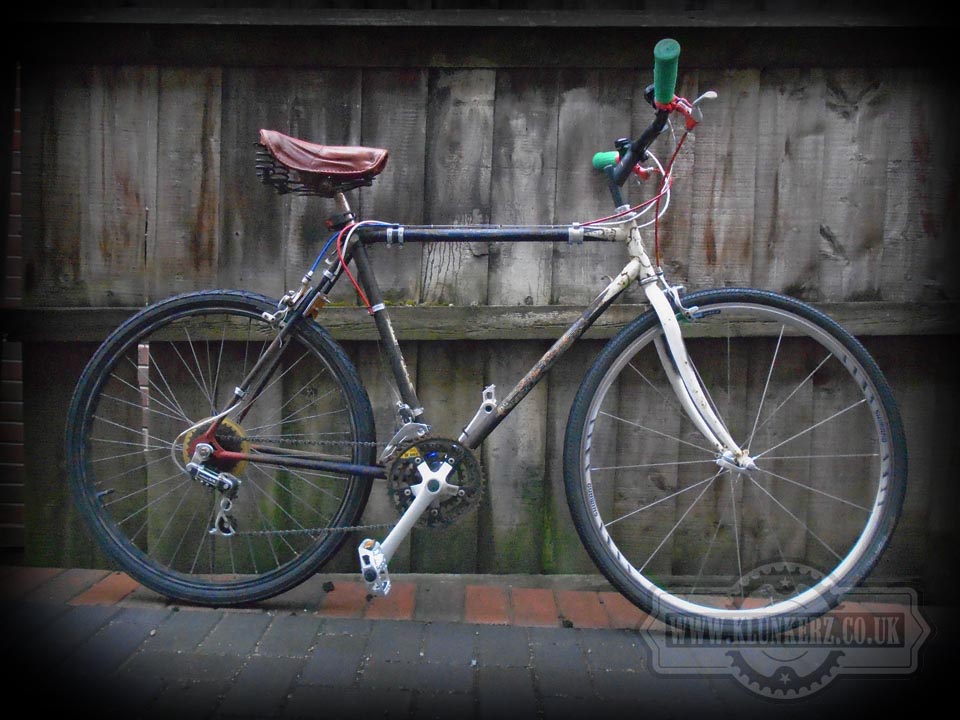 Anyway, as it's all together I thought I'd take it for a run today, just to see how badly it rides. The funny thing is, that it doesn't ride badly at all. Infact, it rides very nicely indeed! So why isn't it finished? Well, the saddle needs to be changed, and then there's the previously mentioned cable guides. I'm not actually sure if they've moved or not. I have noticed that when you squeeze the brake lever hard the cable guides do move a little, but when you release the brake lever they go back to where they were. My feeling is that if I replace the cheap hose clips with some high pressure hose clips this might fix the problem. If not I think I'll try to glue them on with Gripfill, then put the high pressure hose clips on too! The other thing is the gears. I'm not sure if, like the brakes this is down to the guide moving, or I've just not got them set up properly, but I just can't seem to get it to go into gear quite right. The chain clicks on the mechanism as I ride along, it's in gear, it doesn't slip out, but it's not quite right. Lastly, again like I said earlier, I've cut the outers too short on the brake cables from the brake levers to the guides. Tricky to lengthen them, and I havn't got any more of the sparkly outers. I guess I'll just have to keep a close eye on the tip for a week or so! Having had the sparkly ones, I dont really just want boring old black ones... I need the glam!!