December 13, 2018
As it was a slow morning at work today I decided that I would turn another of my tip find frames into a complete bike. Todays frame was to be a Muddy Fox Courier Comp. Many years ago I restored a Courier Comp for Mrs Clint, which got stolen, and then found, and is now locked in our shed awaiting the return of Spring. I went full on with hers, stripping the frame, powder coating it white, and fitting it with all brand new parts. I actually bought a brand new Muddy Fox Impel as it was cheaper than just buying parts. Sadly that frame is left out in our back yard, so that's probably pretty rough by now... Maybe I should dig it out and turn that into a bike... I've got more than enough parts! Anyway, back to the job in hand... 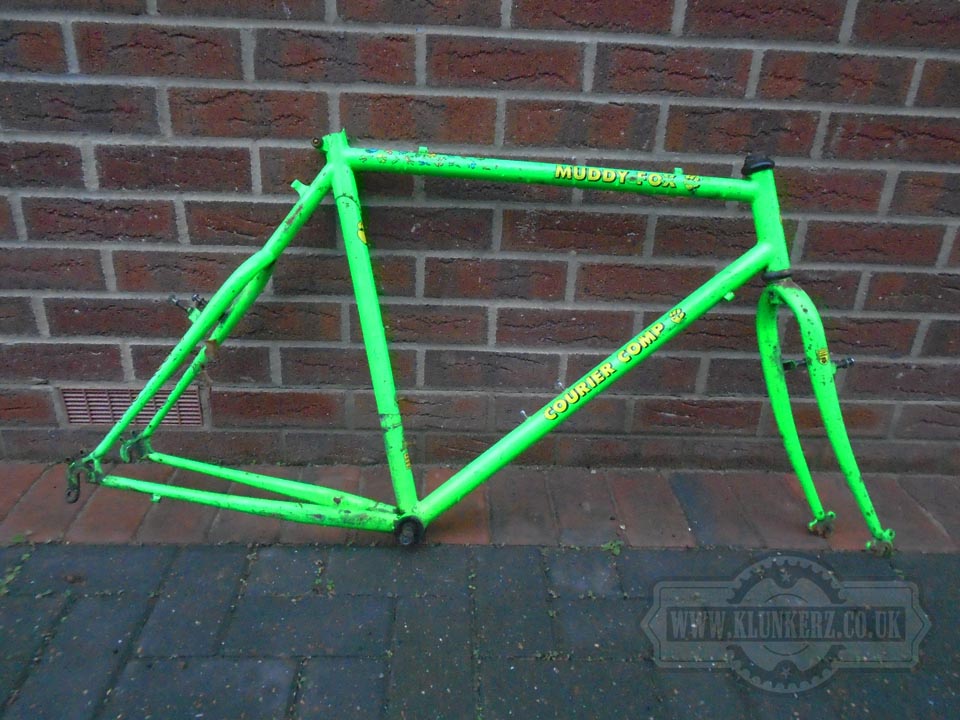 Yep, day-glow green, and pretty much a frame and forks. I dug through my parts stash for a stem, I had an idea that I still had the one from the Courier Comp of Mrs Clints, and sure enough I did, which was handy! I have an idea that Mrs Clints also had day-glow green handlebars, but sadly I was unable to find them, and so just stuck the first set of bars I came across to the stem. 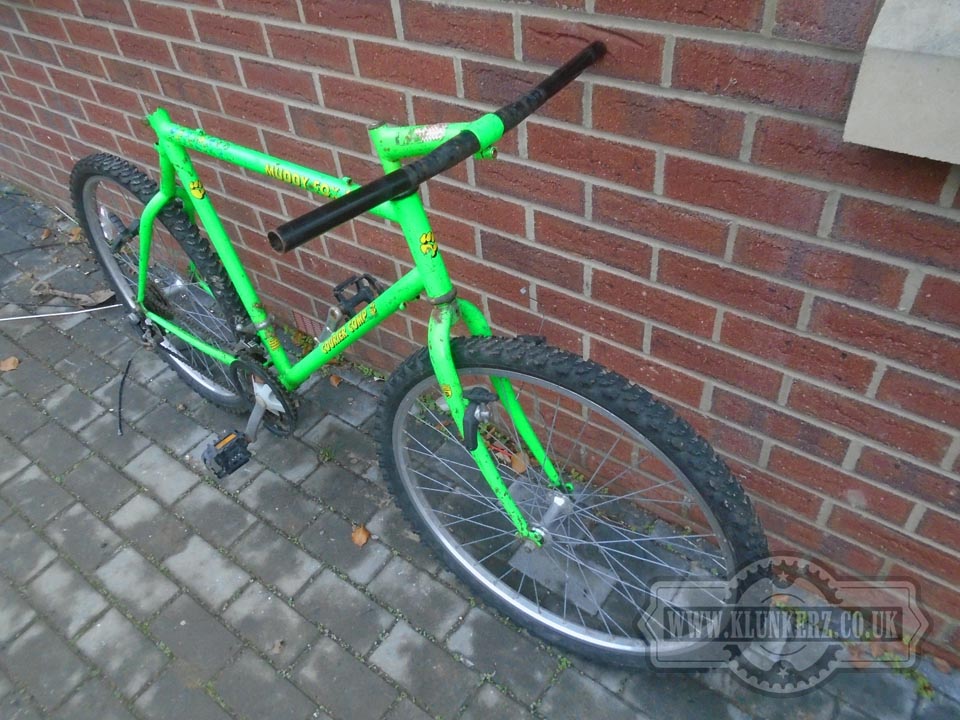 I am pretty sure that when this bike was new it would've had cantilever brakes, and so after a brief rummage through my stash I came up with a matching set. It's funny, because several years ago I just took these things off bikes, and replaced them with Vee brakes instead. Most of the Cantilever brakes I thought I had thrown away, however it would appear that I kept a fair old selection of them, and so as they are period correct for the bike on they went. 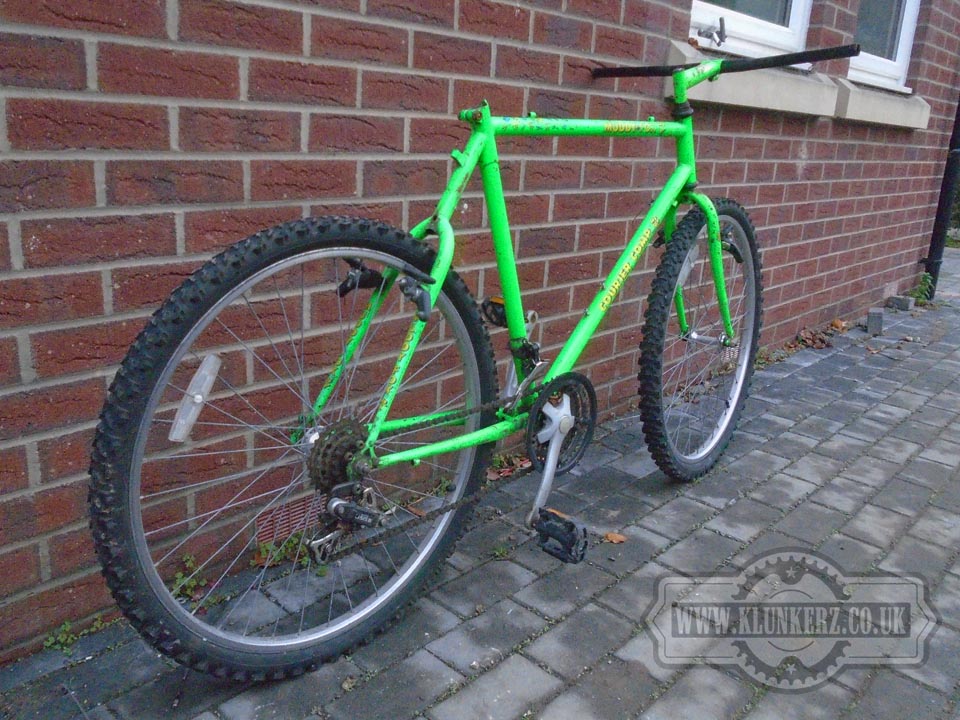 A five speed rear wheel was located, with a matching front wheel, these were added to the bike mainly because they already had tyres on them and they were holding air, so on they went. Next was a crank, I found an old Raleigh steel crank with three cogs, and so I figured that I might as well be a fifteen speed bike, rather than a ten speed one, so on it went along with a half decent chain. I was pretty much there then, however, like the Mongoose Sycamore it was the seat post that I was struggling with. I called around my cycling friends and managed to swap a seat post from my friends stash with a chain wheel from mine. I'm pretty sure he got the better end of the stick here, but I'm trying to deplete my stock so I won't dwell on it! 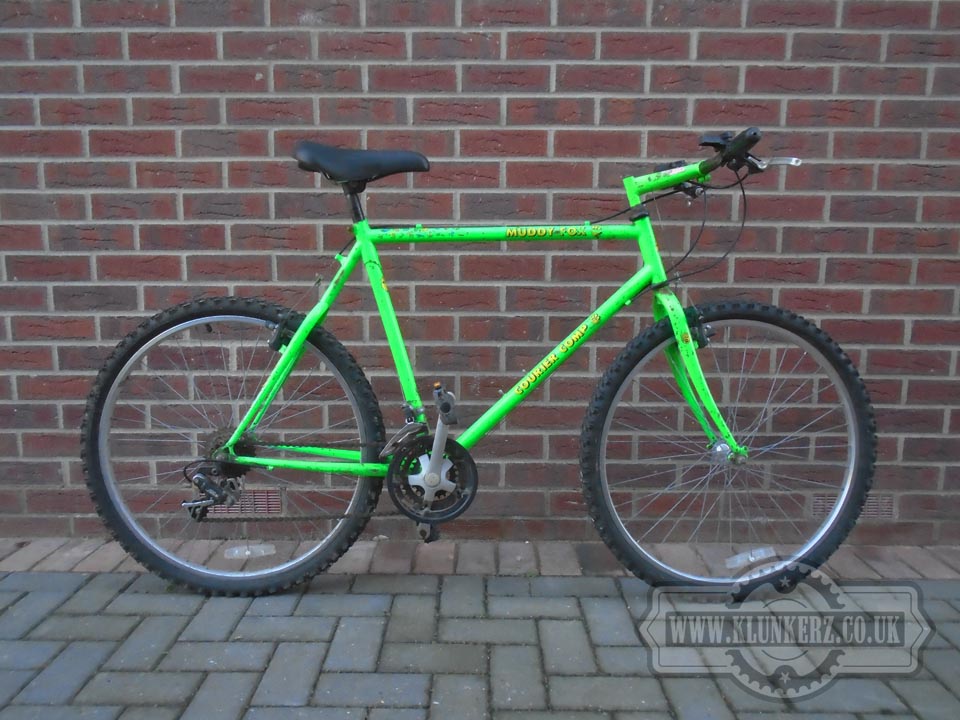 A pair of Fu Jia (whoever they are) friction type gear levers found their way onto the handlebars, along side a pair of Lee Chi brake levers. Admittedly, these are probably not the highest quality items I have, but they were on the top of the gear lever, and brake lever boxes, and as they were both together in matching pairs it was easier to use them than go digging through the boxes looking for another pair. A saddle was also found and stuck on top of the seat post.

By the time I had thrown all of this little lot together it was lunch time, and so as this Muddy Fox has a 21" frame I decided to ride it the 1/2 mile or so home for lunch. It rode pretty well, although it needs a couple of tweeks, but I think after I've tweeked it a little more I might actually take it out for a proper test ride. Goodness knows after all the mince pies I've eaten lately I need to get out there and ride and ride and ride! My mince pie addiction is only gonna get worse over the next couple of weeks!!