January 26, 2019
Despite the egg shaped tyres I have been enjoying riding the Univega Rover, but todays outing took a bit of a turn for the worse. The bike its self was fine, and despite a touch of Sciatica I wasn't too bad either, but my route was very busy today. 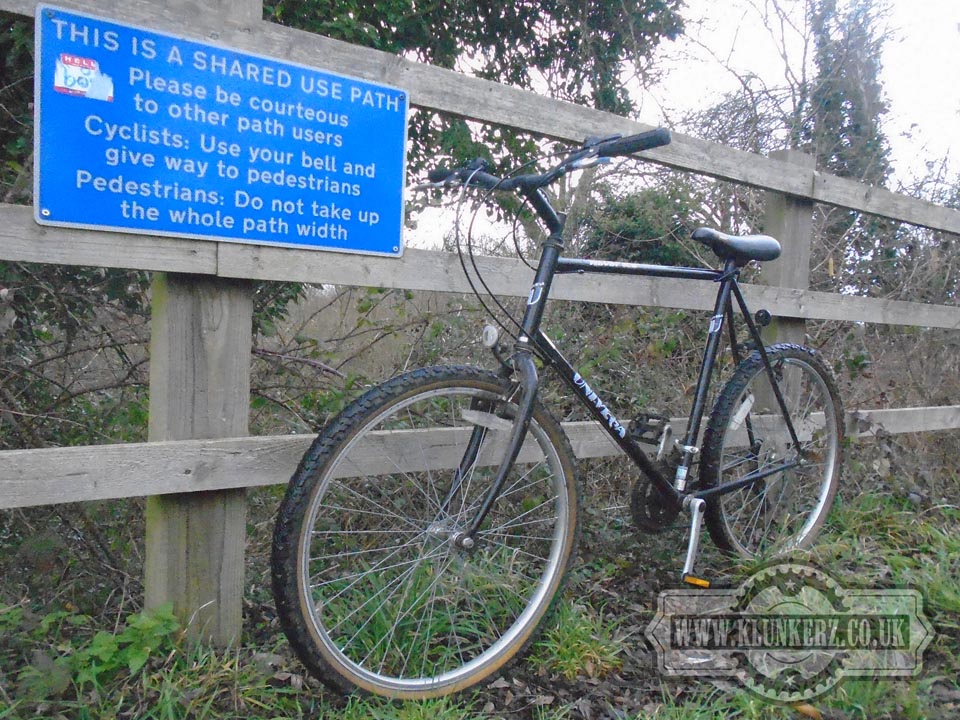 Dogs and their owners, ramblers, cyclists, skateboarders, we were all out there enjoying the path down along the river. This would be no time for setting a personal best time I thought to myself. But, as it was a bit damp, and there was a fair amount of puddles on the pavement I figured that I'd take it a bit steadier anyway. Besides, I wasn't off to work, and so I could take all day if I needed to. This was not a thought that was shared by other cyclists, as they carved their way through the walkers et cetera, but that's up to them. I've run enough dogs over along that path, I don't need to run any more over, and what I really didn't want to do was hit a child! However, on a fairly clear, and wide bit of pavement I did get moving a little bit, only to be passed by half a dozen lads on their mountain bikes who were going a fair bit quicker than me, and then a fella on his racer, who was going like the clappers! About 150 meters ahead of me there was an old fella in the middle of the path, walking along with a walking stick. As the guy on the racer got to him, he passed him, really fast, and really close! The old fella, obviously startled shouted at the Racer rider and waved his stick at him. The lads on their mountain bikes gave him more room, but still he was clearly angered by them, and once again shouted, and waved his stick in the air! As I approached him, he was facing me, I slowed, and gave him as much room as possible, although he was still standing in the middle of the path. I recognised the old fella, I'd encountered him before. I have various names to the people I encounter on a regular basis on my cycle route, and this fella I have encountered more than once. I call him Captain Mainwaring... 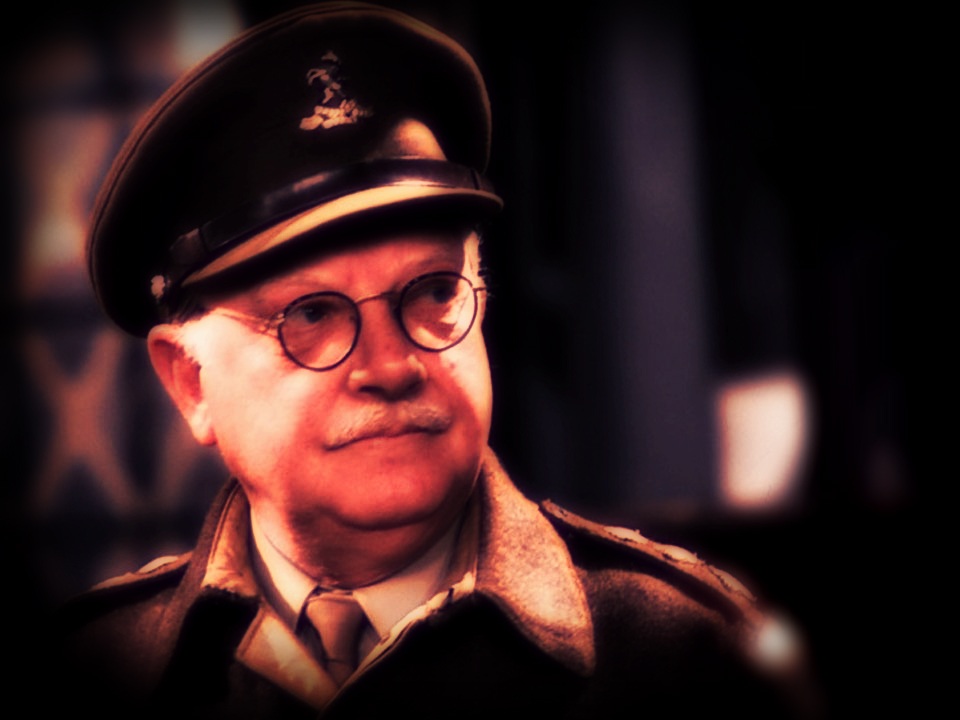 Due to his uncanny resemblance to Captain Mainwaring from the 1970's T.V. Dads Army. Anyway, Captain Mainwaring is often on the path along by the river, and he hates cyclists. The first time I encountered him was around the middle of last year, when he actually hit me with his walking stick, and it wasn't a little tap either. I was so stunned by this that I just cycled off really fast. Since then there's been a couple of times when he's shouted at me, and so, like I said, upon seeing it was him, I slowed right down, and got as far away from him as possible as I passed him! WHACK!!! He cracked me with his walking stick, really hard across my thigh! It was cold this morning, and I was a little bit wet, to say that it hurt would be an understatement. He may be old but he sure can hit! I stopped, parked my bike, and walked back towards him. What the heck do you think you're doing? I asked. "You people aren't allowed to cycle on the pavement, it's illegal" he exclaimed. I pointed to a nearby sign that says that its a shared footpath. 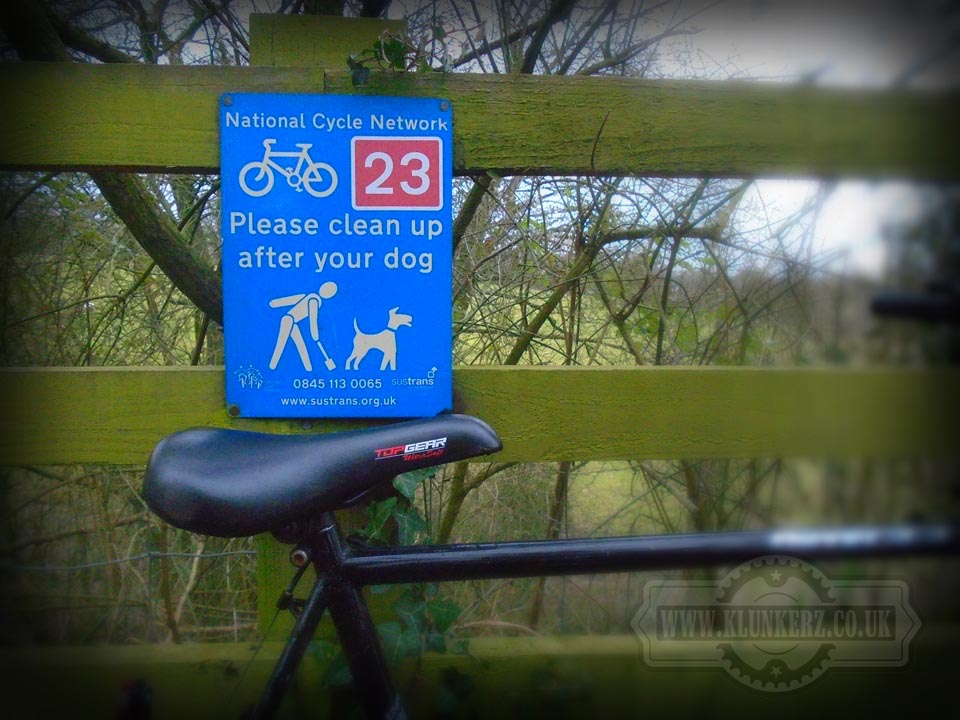 I said, see that? That says I can ride my bike along here. It's a cycle route! Captain Mainwaring, still insisted that what I was doing was illegal, and if I didn't leave him alone he was going to hit me again. He raised his stick in the air, and swiped it towards me. I grabbed it, snatched it out of his hand, and in one single movement tossed it into the river! "Thats it!" He said, "I'm calling the police! I can't walk without my stick, and you've attacked me!" I said that this was the first thing he'd said that made any sense, because as wrong as it probably was for me to grab his stick, and chuck it in the river, the Police would probably take an even dimmer view on someone that actually hits cyclists with a stick as they pass them. I reached into my bag, and produced my phone. I pressed 999, and handed him the phone telling him to just press the green button, and he would be through to the Police. I know what you're probably thinking, that was a risky move, what if he'd thrown my phone in the river? Well, I'm not that big into fancy phones and technology, my Alcatel phone was free with £10 top-up form carphone whorehouse! So I wasn't really losing much, I'm pretty much out of credit anyway! Well, he pushed my phone away, and started ranting that I wasn't worth the effort, and the Police never do anything anyway! I told him that I ride along this path quite often, and that this was not the first time he'd lashed out at me and hit me with his stick. The next time he did it, I told him I was going to call the Police myself! I hobbled back to my bike, that was still laying on the path... 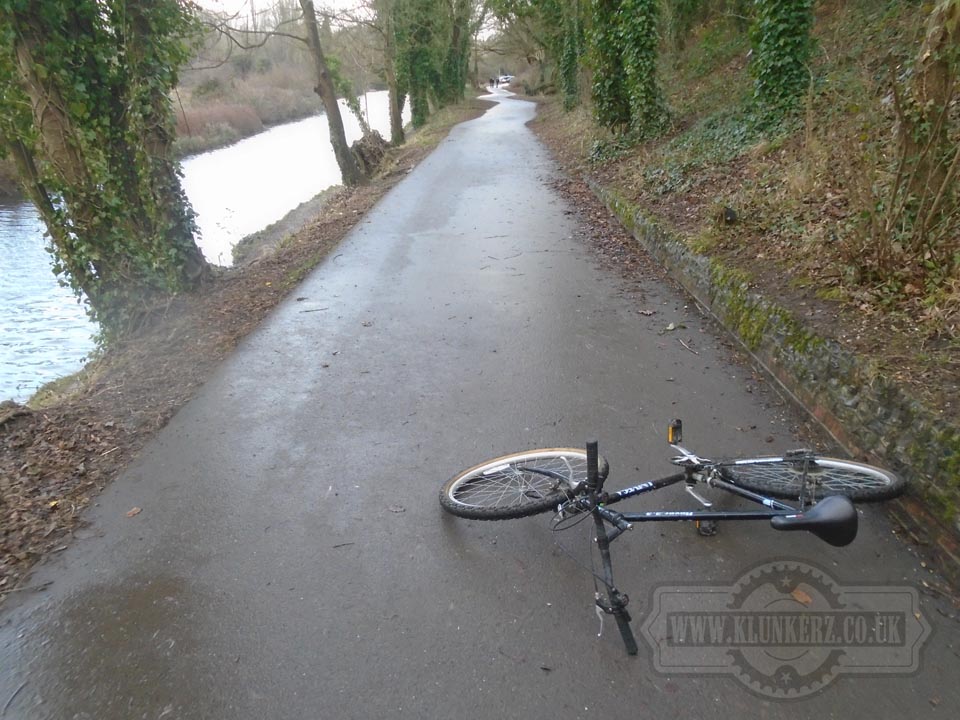 Now as you can see, it's a pretty wide path, without his stick I doubt that he would've been able to hit my because I would've been out of his reach. After getting back on to my bike, and cycling off I started to think that it was wrong of me to grab his stick and chuck it in the river, not because it was metal, and wouldn't biodegrade, it was wood, so I figured it would be like any other stick that fell into the river. But I thought that it was probably wrong to snatch it from him, I wondered if the best point of action to take would've been to have just kept going? But sitting here, twelve hours later it's still tender to the touch, and what if he'd have hit me in the face? I'm ugly enough without being hit in the face with a stick! Actually, as I sit here writing this, I think that as wrong as it was to do what I did, that fella's a menace! I wonder how many other cyclists he's hit? What does he think he's doing? I agree that he was probably quite startled by the first cyclist to go by him as he was very close, and I think that what the racing bike rider did was very wrong, as he clearly did it to startle Captain Mainwaring. But, I wonder what if Captain Mainwaring had lashed out at him as he was going out on his ride, and so on the return run he decided to get his own back? Justified? Probably not, but I can understand his motives if that is what happened.

Anyway, I was still thinking about it, when I arrived back at BelongaClint, and so, feeling a bit sorry for the old fella, I grabbed my own walking stick and headed back out to where it all happened. Captain Mainwaring was nowhere to be found. I actually went a bit further to see if he was struggling along the path somewhere, but he wasn't. So much for not being able to walk without his stick then! In the end I decided that he probably could walk without it, as if he couldn't I would've found him where I left him, so I headed off home passing various signs like this one as I did so. 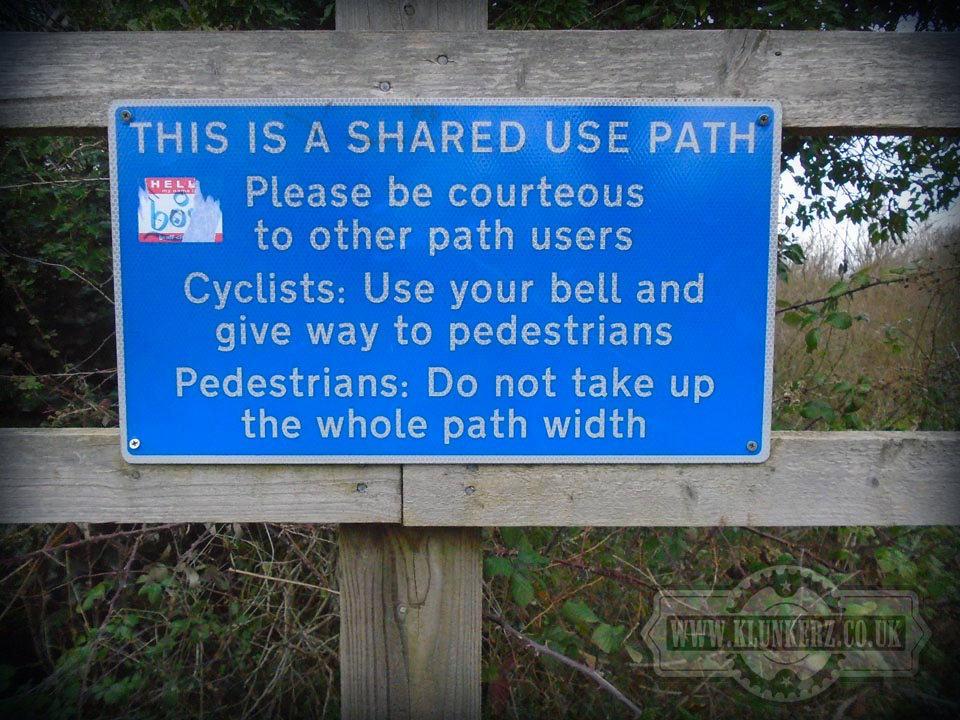 I think the next time I see Captain Mainwaring I shall just stop, and turn around! But hopefully today he realised that he was in the wrong, and that he shouldn't have lashed out. I was right about one thing though, today would be no time for setting a personal best time, todays time... 97 minutes! I reckon I could actually have walked it in that time!