February 08, 2019
I like this thing, I really do. For some reason I always prefer to have bigger frames, even though I am not exactly tall myself.

The thing is, I even think that large frames look a bit odd, but I still prefer them. What I don't like however is my egg shaped tyres! It's a very odd sensation to be riding along a flat piece of tarmac, but the bike is bucking away beneath you, even weirder that its bucking is not random, but it's uniform, or almost rhythmically bucking. I decided that it was time to do something about that, I swapped in a matching pair of tyres from my stash to try to alleviate the problem, and you know what... It was exactly the same! If there was any difference it must've been so little that it was unnoticeable! After a couple of attempts I decided that the only way forward was to actually go out, and splurge on a pair of brand new tyres! An idea I might add that is against my preferred method of make do and mend cycle maintenance. But with me liking this bike more and more every time I ride it I figured that it was probably worth it in the long run, especially if I want to keep it for a while. 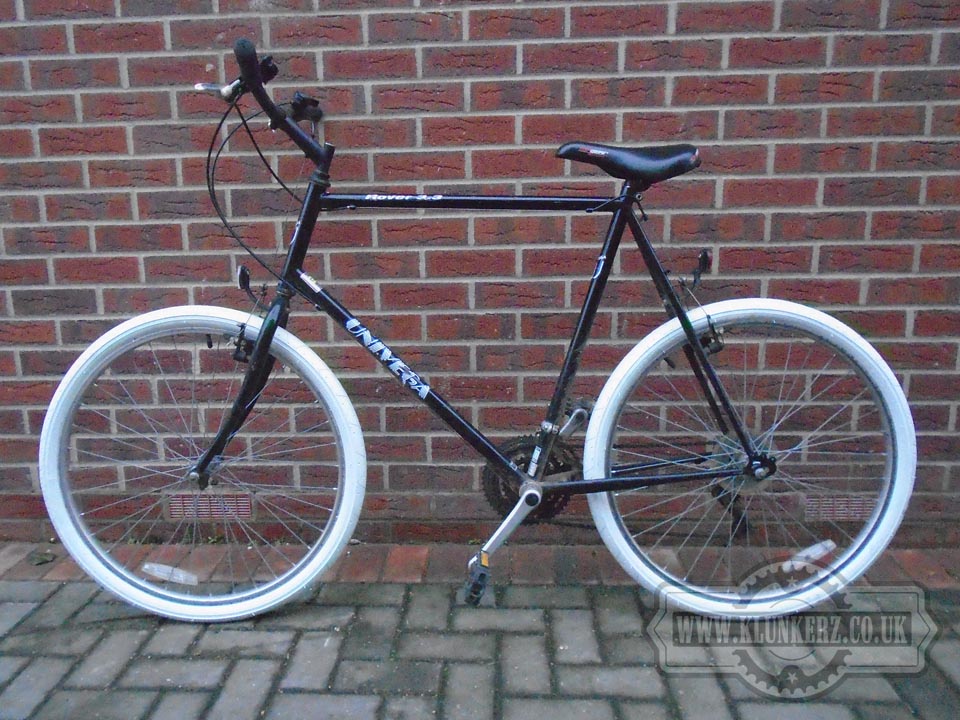 Wallet lightened (it's fast becoming a 'Superleggera' wallet!), and new tyres purchased it was back to BelongaClint to fit the damn things. I must admit that I've thought about having white tyres before, I toyed with the idea for the Diamond back, and indeed I may still go down that route when I get my mojo back for it. But I've never been sure enough in my mind to buy some. But I thought that if they were going to look good on anything, I thought it would probably be this. 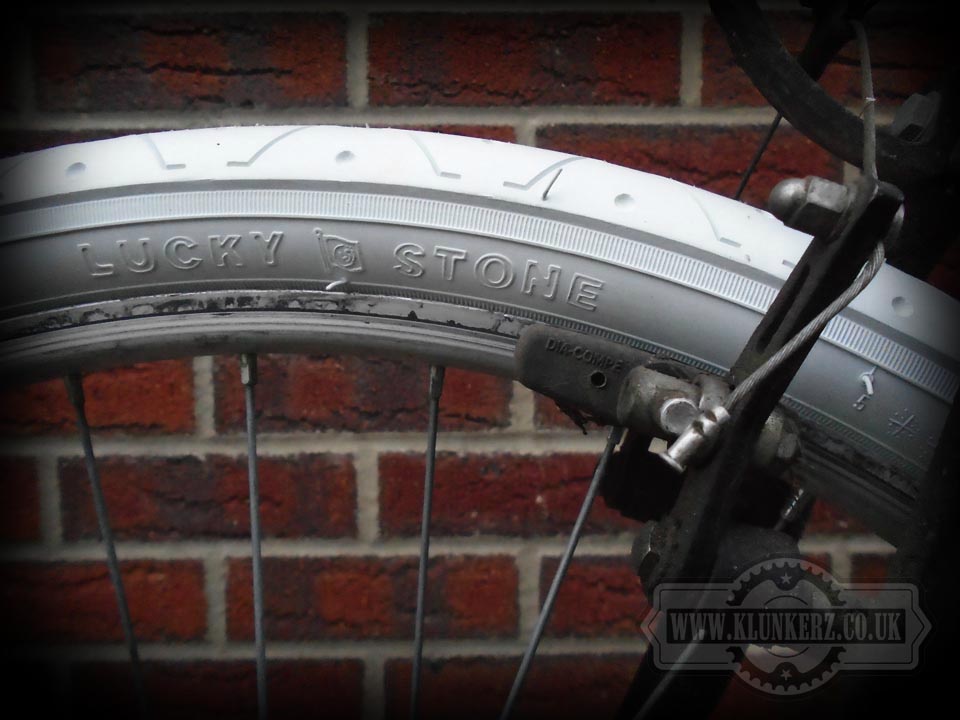 Lucky Stone! I've no idea who these people are, but I liked the road style tread, and the soft compound that the tyres would appear to be made from. I wonder how long it will be before they look hideously grubby, and I start to wish that I had just stuck with black instead! By the time I had finished fitting them it was a bit too late to go out for a test ride, and so I put the Univega away, and figured that it would be all good and ready to ride in the morning. The morning came... 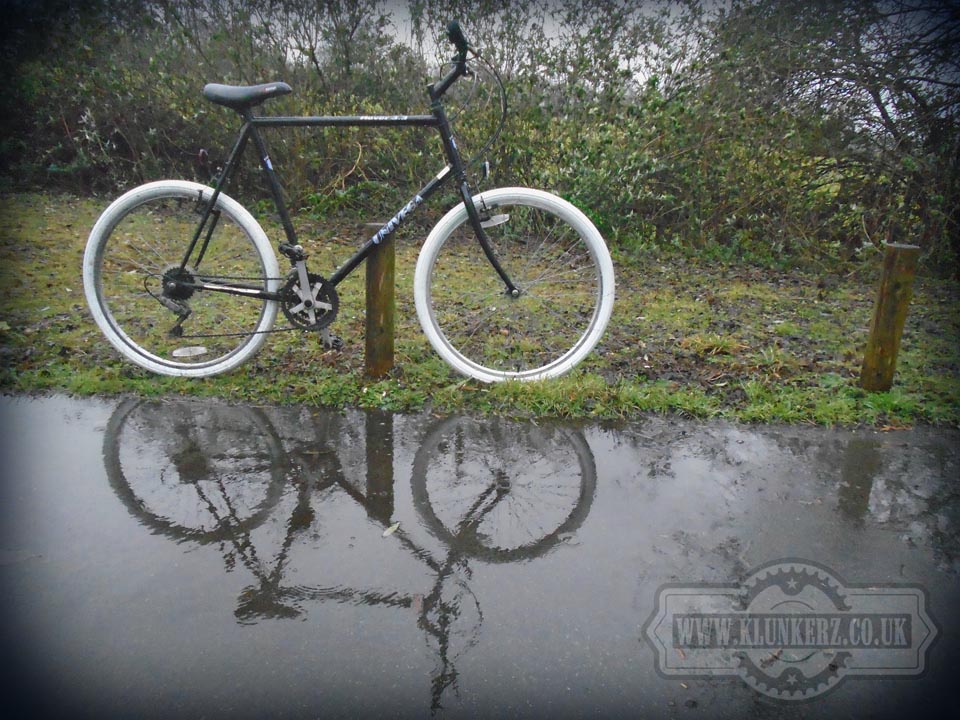 Ugh! And it was bleak! No matter, I got my work clobber on, and got ready to ride my little route to work. I figured that today would be a slow day due to the weather, and I wasn't wrong! I guess that it's not so much the rain, or even the wind that I don't like riding in. But the rain and the wind combined I detest with a passion! The thing I really don't understand is that on my little route I ride to a point, then turn around and ride the same route back, so why is it that I seem to be riding into a head wind all the way there, and then all the way back again? It always seems to be the way. Many years ago I lived in Swansea, and I used to have a route that took me from Swansea to Mumbles, some five miles away along the path that ran alongside the beach. I would go all the way there battling a vicious headwind all the way, only to turn around, and battle it all the way back too! How does this happen? Does the wind somehow know when I've turned around? 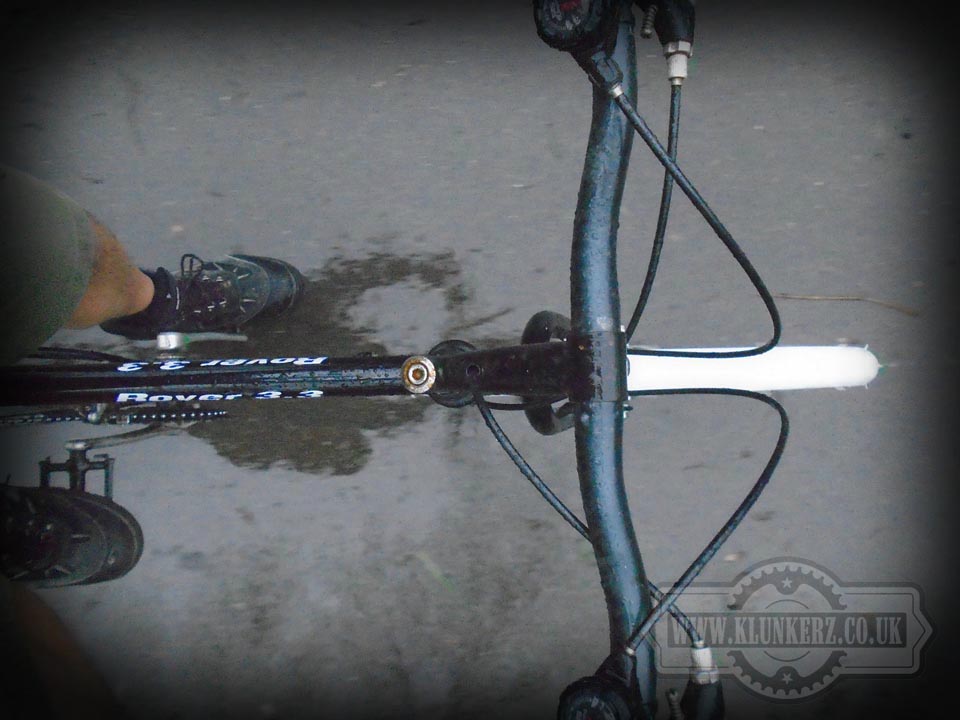 Anyway, with my new tyres fitted I was expecting a smooth ride, and you know what? It was exactly the same! Like before if there was any difference it must've been so little that it was unnoticeable! What the heck is the problem? With the tyres off the rims look perfectly round, and arrow straight, they look to be in perfect condition, but there must be a problem with them. I can't believe that I can use three different tyres, yet get exactly the same result time after time after time. It must be the wheels, I can only imagine that there's a problem with how the tyres are seated on the rims, in my mind that is the only explanation. I think that what I will do know is keep an eye out for a half decent pair of wheels at the tip, and then when I find some I'll fit these white tyres to them and see if it rides any better at all. It must be the wheels, it's the only thing I've not changed, although, I'm still using the same innertube, but I can't see how it can be that.

Fifty minutes later I arrived at work feeling a bit deflated about my still egg shaped tyres, but although soaked to the bone I was ready to spend the day laying concrete. Luckily for me rain stopped play after an hour or so, and so I was heading back to BelongaClint to try and dry, and thaw out! 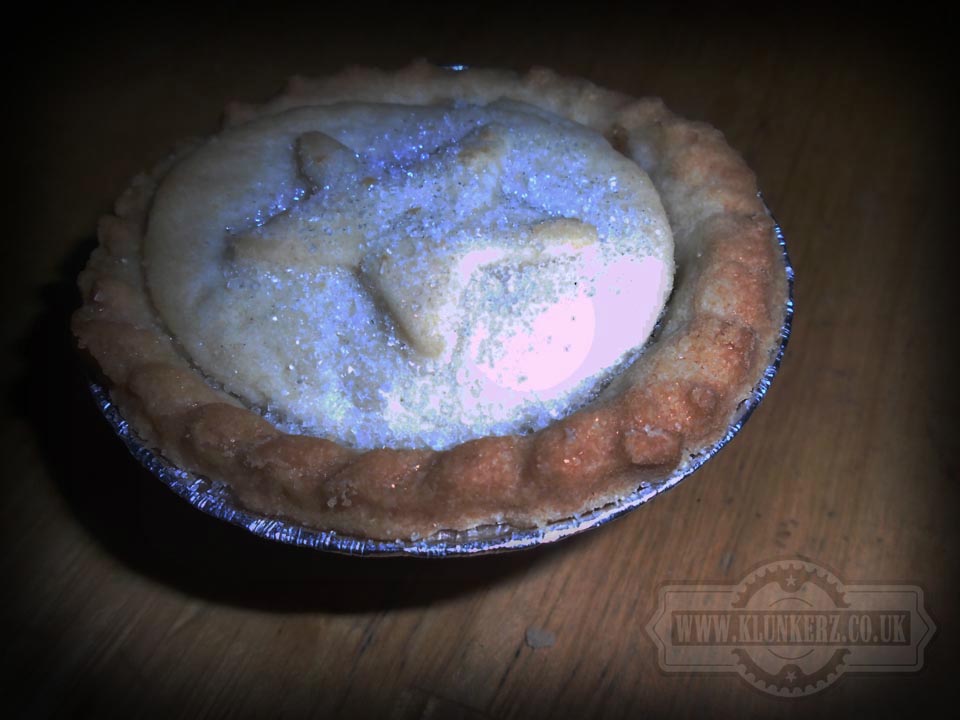 As I sat there drinking a nice cup of tea, and eating the last mince pie two thoughts came to mind. The first one was that I wondered how long it would be before mince pies once again graced the shelves of the supermarket. In 2017 I discovered the first mince pie of the season in Sainsbury's on the 7th of September. Last year Tesco was the winner, with them being discovered by me on the 5th of September, beating the previous year by two whole days! I can only wonder if they actually started to hit the shelves on the 1st! Seven months to wait, until then, I'll miss you my delicious mince pies! Of course, my waistline probably wont! The other thing I thought while I was lamenting the loss of mince pies from the supermarkets was that I hate getting covered in mud, rain, and goodness knows what else while I'm riding my bike in less than ideal cycling conditions. Surely amongst all that crap that I refer to as my parts stash there must be a pair of mudguards? I've taken enough sets off bikes over the years because as a rule, I'm not a fan of them. I quick dig through and I was in luck. Not only did I have both a front and a back one, but a matching pair! 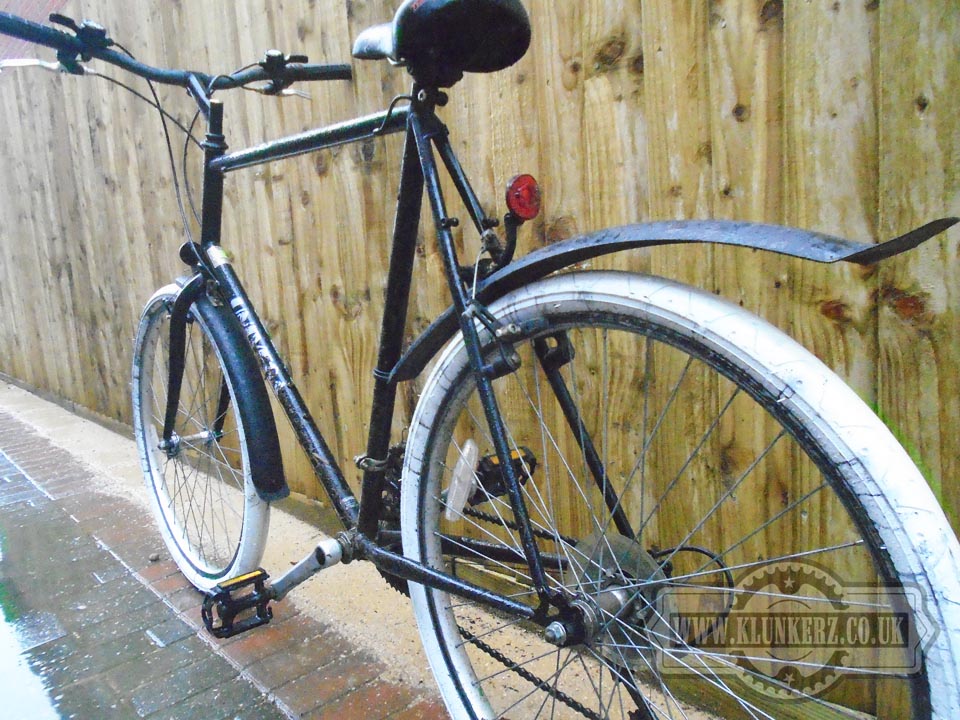 Fantasitico! Of course this did mean getting out there and fitting them in the pouring rain, but no matter. Next time I want to ride my bike in the rain (not that I ever want to do that really) I will be ready! 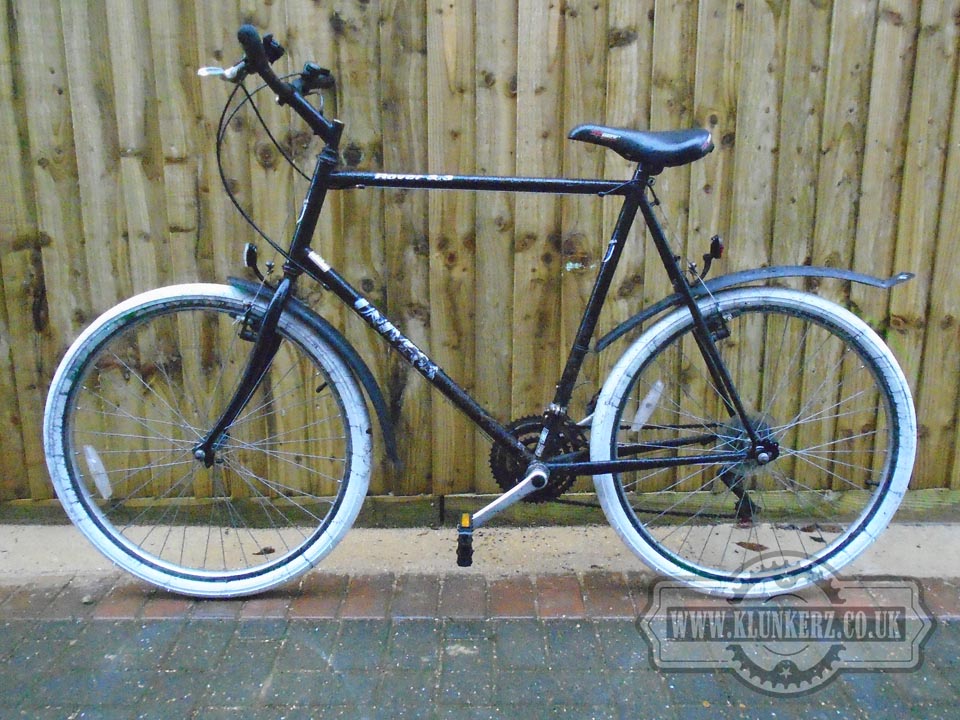 Actually, I even quite like how it looks with the mudguards fitted, and the white tyres are definitely and improvement to the looks of the thing. I just wish they improved the ride of the thing too! I'm almost certain that there will be further fettling of this bike. While digging through my stash I have unearthed another crank, and a nicer set of brakes for it, so no doubt these will get fitted at some point in the near future. Probably after I found a decent set of wheels for it. I really wonder if the reason that this was at the tip in the first place is due to the wheels, and perhaps the previous owner got so fed up with the bumpy ride that in the end they just decided to dump it and get something new. I dunno, and I guess I'll never know. But for now what I do know is that I'm not giving up on it yet. I've not given up on the Diamond Back and that thing has fought me every step of the way, so there's no way I'm giving up on this. I will make this thing ride nicely as it's so close already, but when I do I reckon it will be fantastic to ride!