August 09, 2019
My back is bad. This happened about this time last year, for what appeared to be no reason at all. Yesterday I carried several radiators up into BelongaClint to start my new central heating project as I've had no heating at all for the last two and a bit years. This year, Mrs Clint has decided that she doesn't want to endure sub zero temperatures again in our flat, and so I've been given the go ahead to fit a new central heating system. The current one, that doesn't work is badly designed, the radiators are all in the wrong place, and undersized. This meant that even when it did work, our flat never got comfortably warm in the Winter. But yesterday as I lugged one of the 72kg radiators up the stairs I felt a bit of a pull on my back. Before going to bed last night I got a good rub down with Deep Heat, and hoped when I got up this morning my back would be OK. Of course it wasn't, I got up (eventually) stiff as a board!

This time last year when I trapped my Sciatic nerve I ended up not riding for months, and found it quite difficult to get back into it. This morning I tried a different approach, I got another good rub down with Deep Heat, and headed out to the bikes. 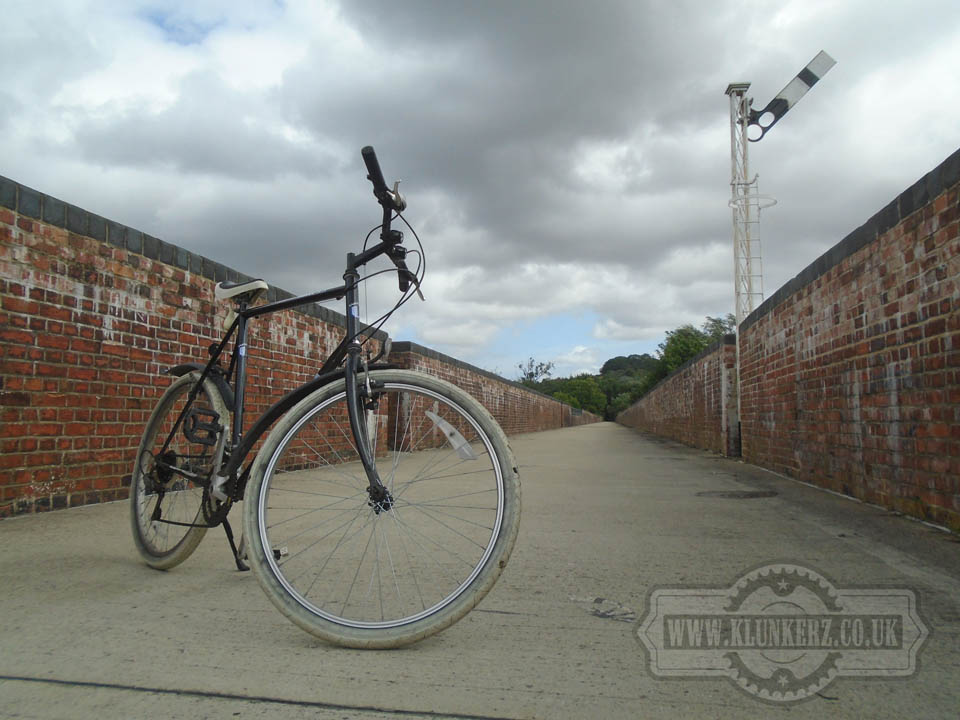 I decided that the big frame of the Univega might actually be beneficial to my aching back, and, as it hasn't been ridden for a while I figured that it was about time it went out. When I got this thing about eight months ago I really did think that I'd have a few rides, then put it up for sale. But that hasn't been the case. It's been ridden a lot, and to be honest, unless someone steals it I can't see it going anywhere! It has been tinkered with a little bit, and I like it more and more, it has responded well to some light fettling. Although, one of the things I did change was the saddle. 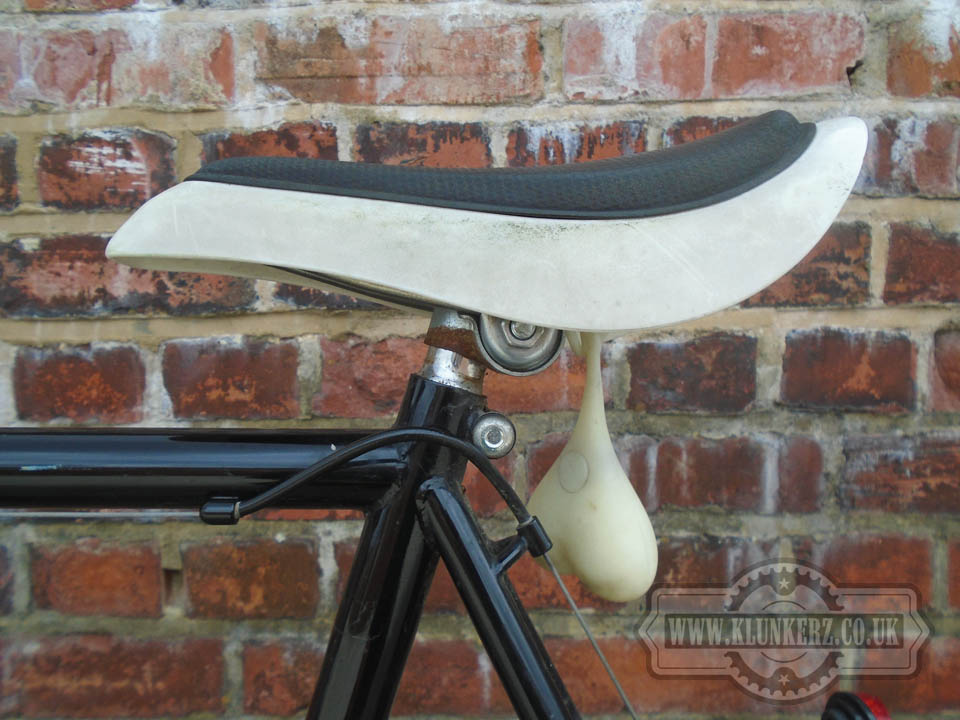 This was done for no other reason other than aesthetics. The saddle that was on there was in good shape and quite comfortable. But after I'd put the white tyres on it, I came across this black and white saddle on a BMX at the tip. I pretty quickly thought that it needed to be liberated from the tip, and fitted to the Univega. I put it on, and I was pretty pleased with how it looked, but the saddle is solid plastic, with a very thin layer of high density foam which presumably offers some padding on top. The trouble is, that black high density foam pad on the top, is pretty much as hard as the white plastic underneath! It does look cool though! I wouldn't say its the most comfortable saddle I've ever sat on, but it's nowhere near as bad as I thought it would be, and to be honest it is bareable on my regular route. However, much further, like if I ride for about an hour or so, then man-land does get a little bit tingly and numb. I have counter-acted this by standing up while I ride every so often, just to keep the blood flow to my gentlemans vegatables, and this is working quite well. But today, with my stiff back I must admit I did start to wonder if it's time to change this saddle for something with a little more padding.

The thing is, whatever I put in its place ideally will also need to be black and white in colour. I've got a theme going on here on this bike, and I'd like to keep that theme running. I figured that as I'd be passing the tip it wouldn't hurt to call in and see if they had any bikes in that had white saddles, but no luck. They did however have a bike in that had something else on it that I wanted to fit to the Univega... 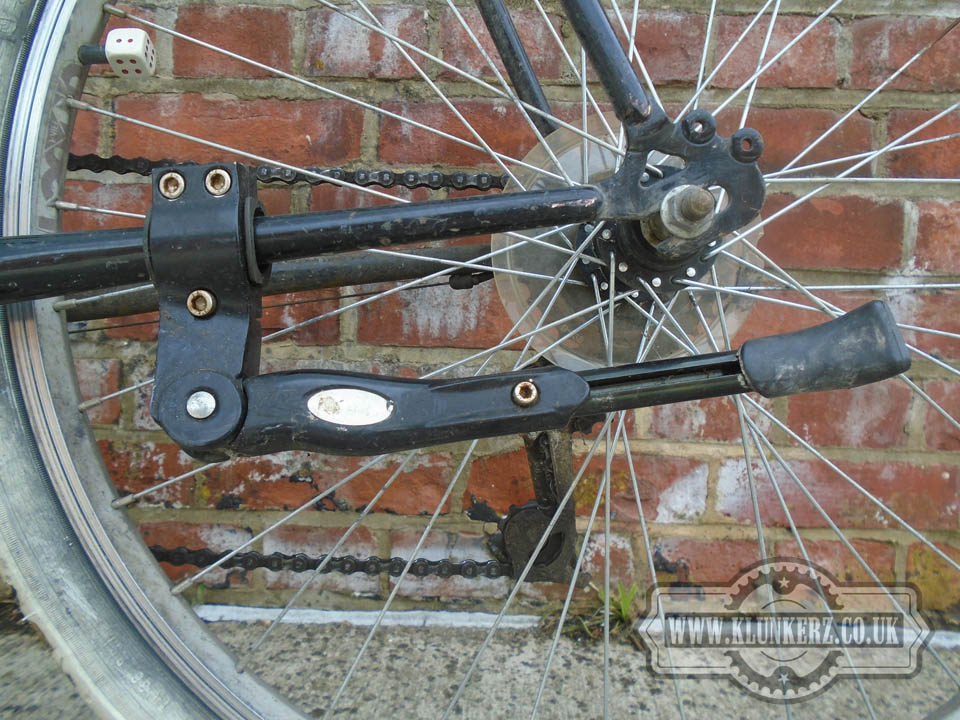 A stick-thingy, as my youngest daughter calls them, or a stand to everyone else! I've no idea why, but I like to put stands on my bikes, and I've been on the lookout for one for ages. typical there would be the type I wanted today, when I was going to struggle to get down to it! I flipped the bike over (uncomfortable) and took the stand off the cheap crappy bike it was on. To be fair it was a struggle to not to take the whole bike home with me! But I reasoned that I probably already have my qouta of cheap, black, crappy mountain bikes of the late Eighties and early Nineties... Probably go back for it tomorrow! But before long the three bolts were undone, and I was flipping my Univega (also uncomfortable) to put it onto my bike. I know it's a small addition, that in my younger days I would've removed if I'd have got a bike with a stand on. But now, in my mind having a stand is important to me, and far better than just leaning the bike up against a wall when I'm not riding it.

Anyway, with the stand on, and the bike improved in my mind by a 100% I headed off on my ride. 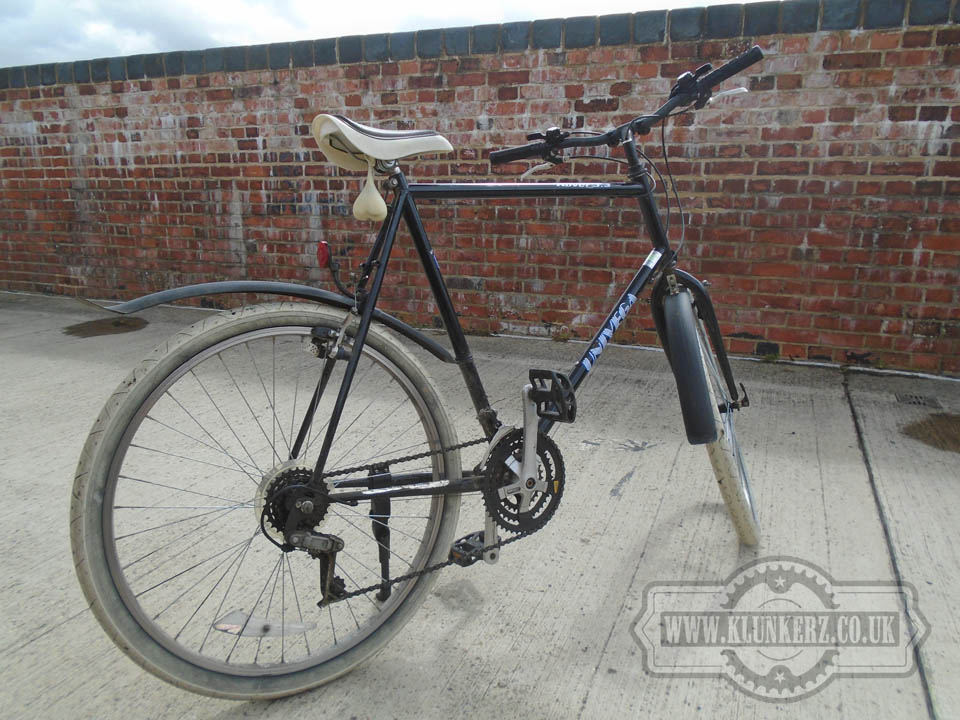 The ride it's self was, well, leisurely at best! My leg and back were quite stiff and sore when I left BelongaClint, but it has to be said that after I'd warmed up a bit they both felt a little better, not a lot by any stretch of the imagination, but certainly a little better than when I set off, and much better than when I got up. However, as I sit here writing this now I have started to stiffen up a little. I wonder if the key to it is to just keep moving? I mean, it's uncomfortable to move, but then it's uncomfortable to stay still aswell. No matter what I do, it's uncomfortable! But at this point in time I think it's probably more uncomfortable to just sit around the house. I think I'll try going for my usual evening stroll later, although I may well do it at a more leisurely pace tonight than I normally do. See how stiff and sore my back and leg is tomorrow. Hopefully by keeping moving it will ease my discomfort, and tomorrow I will be feeling a bit better, but only time will tell.