September 15, 2019
I love the Summer holidays. I get to spend time with my two little Monsters, just doing nothing in particular but hanging out and doing stuff together. One of those things we do is riding. I was determined to get the Sweet Thunder cleaned, serviced, and ready to ride for my littlest Monster by the begining on the Summer holidays. 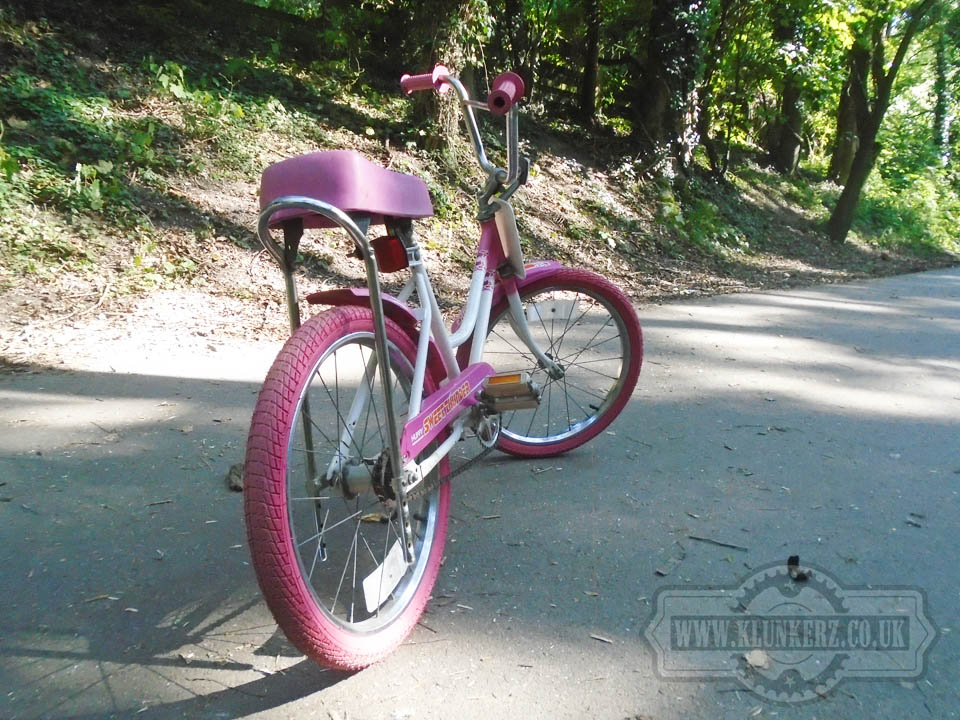 I made it... Just! I don't really know why this has taken me so long, but by the time the Summer holiday started, it still hadn't been done! Mrs Clint was taking the Monsters camping for a couple of days at the start of the holiday, and so, while they were away I stripped it down, cleaned, and lubricated everything, and put it back together with some new tubes from poundland, and new tyres from t'internet. After fitting the new tubes and tyres I pumped them up, but by the following morning the rear tyre was flat again! I removed the tyre, and checked the inner tube... Punctured! My brand new innertube was already punctured without even being ridden, all it had done was sit in our lounge where I was cleaning and servicing the bike! (Shhh! Don't tell Mrs Clint, she was away, she doesn't know!) So it was off to poundland again for a puncture repair kit! 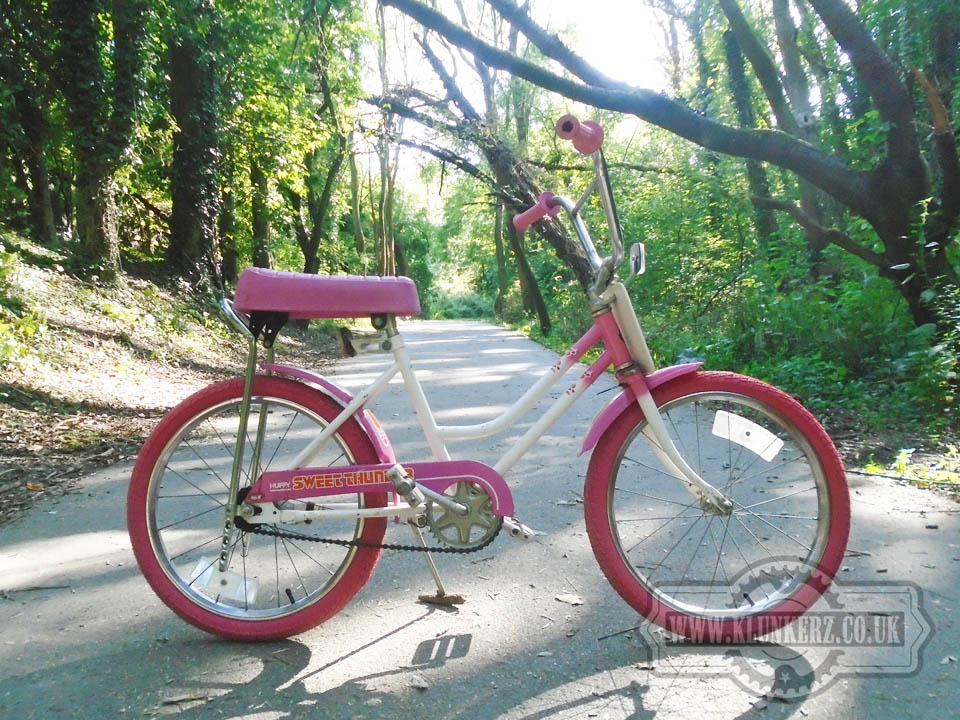 With the puncture repaired I cleaned up the frame as best I could, and re-assembled it all. It does all look a lot better, but for some reason I wasn't able to get the frame as clean as I had hoped. I washed it several times with car wash, and then gave it a good going over with WD-40, but the white parts of the frame especially still look to be a bit grubby close up, as does the saddle. The chromework was a little tarnished, and has the odd rusty spots, but I polished that all up as best I could with Autosol. That stuff doesn't seem to be as good as I remembered it from back when I was a kid polishing my wheels on my Chopper, but it still gave the lounge the old famillier smell of Amonia. (I left the windows open for a couple of days so Mrs Clint wouldn't know!) 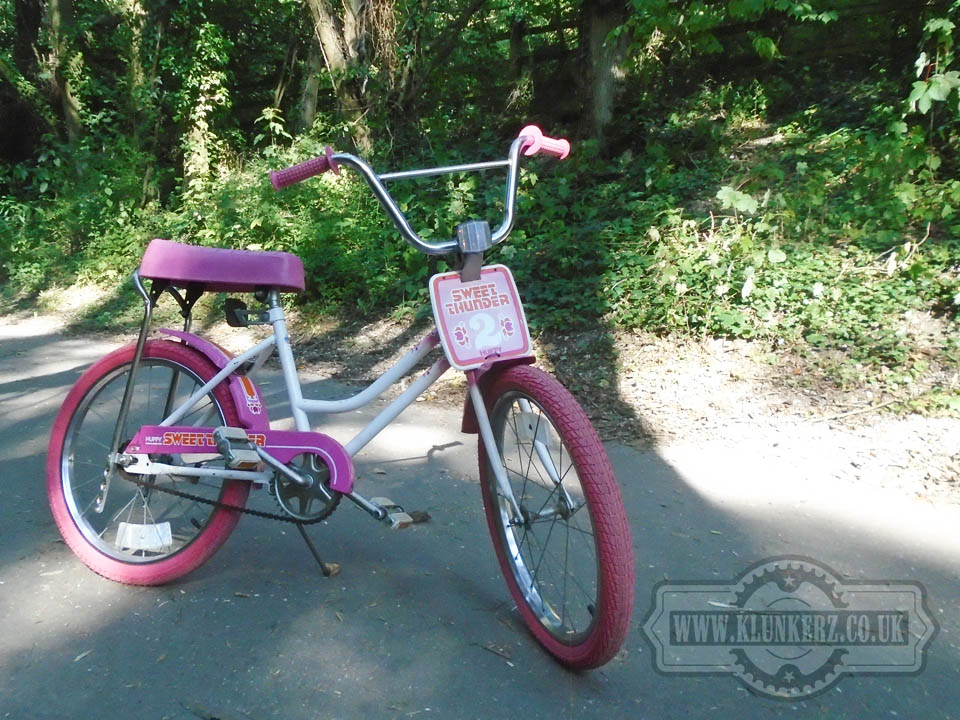 When my littlest Monster saw it she was pretty happy with how it looked. I thought I was taking a bit of a risk with the pink tyres, and couldn't decide really if I wanted to put pink, white, or even normal black tyres on it. I think when my Cousin had hers it had black tyres with white walls. I even thought about having one pink, and one white tyre, but as these were sold in pairs I figured in the end that pink was probably the way forward, even though I thought my littlest Monster might not care for the amount of pink on it. But, as I said she was delighted.

Since getting it all together again it's been ridden a fair amount, and it's new owner says that she's pretty happy with how it rides, however, she complains a little bit that the loaf saddle gives her 'chub-rub' (her words not mine) on the insides of her thighs. thinking back some forty years to when I was a child touring the neighbourhood on my Chopper I seem to remember that spending the day in the saddle on a hot Summers day also used to give me 'chub-rub' too. I'm guessing that she will probably feel a bit more comfortable on it once the weather is a little cooler, so she won't be sticking to the vinyl seat so  much as she rides. 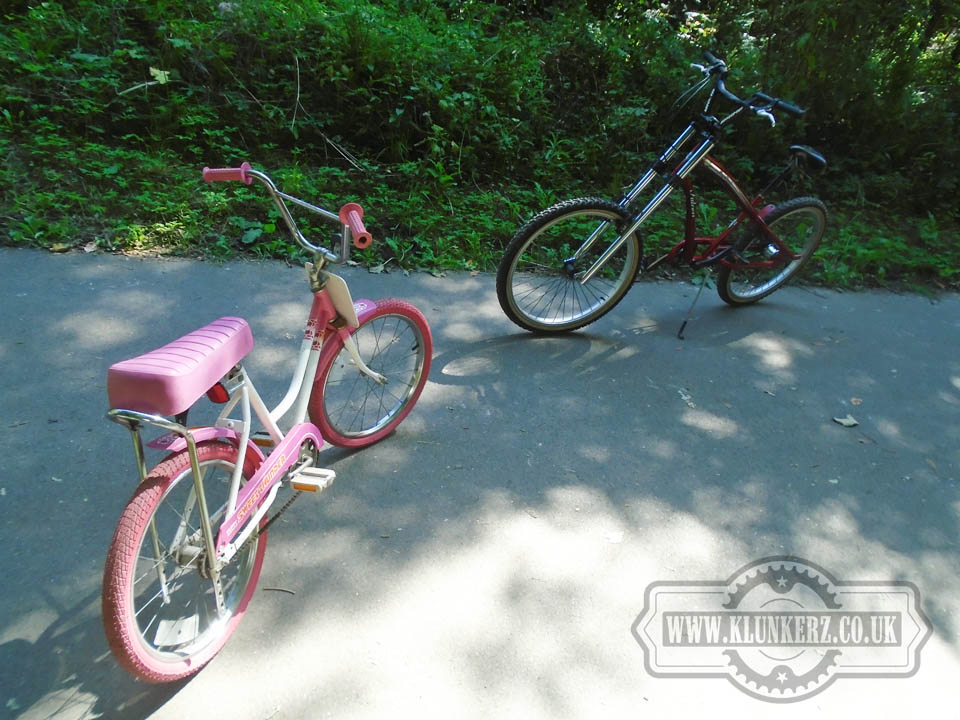 Watching her ride it she looked pretty cool, but I am wondering how many more rides she's going to get on it before she's too big for it. I think that if it had a regular saddle she may well already be on the cusp of being too big, but as I have already raised the saddle a little, and she sits towards the back of it at the moment she's fine. Theres still some height adjustment to be had on both the seat, and handlebars, so I reckon she's fine for a little while. However, one or two good growth spurts and I think that she may well be back on the Bomber! But for now, she's enjoying the Sweet Thunder, and riding it as much as she can!