May 02, 2020
Back at the beginning of November last year when I picked the Raleigh Lizard up from the dump I made some quip about retiring the Univega for a bit while I tweak it, change it, and probably ruin it it in the process. As luck would have it I didn't touch it, and so, after dragging it back out of my lock up and putting some fresh wind in the tyres, it's still pretty good to ride. 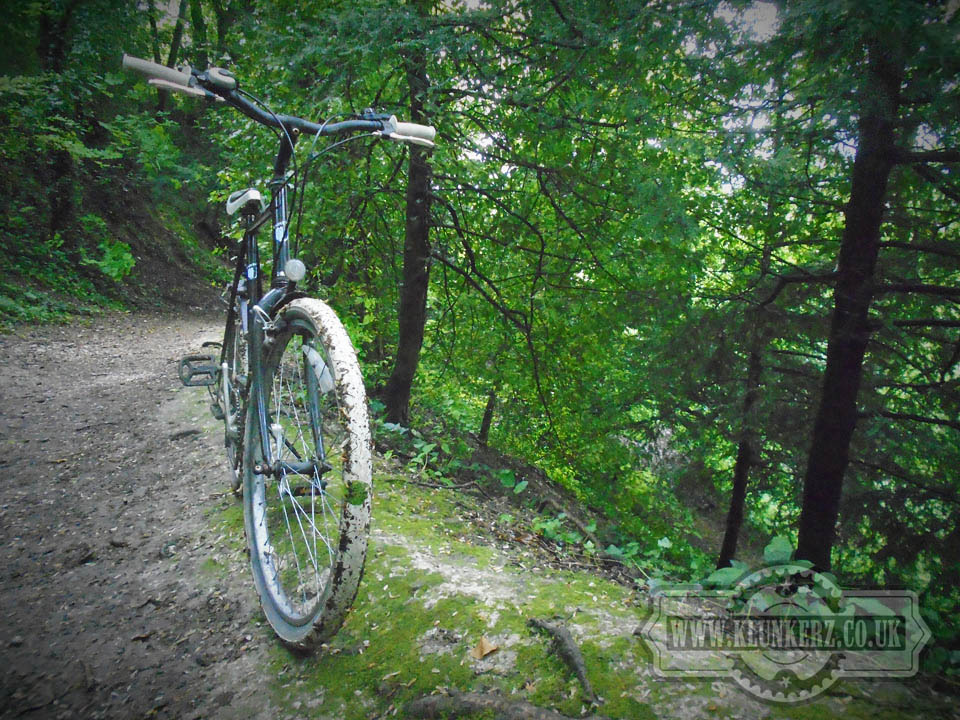 I do still want to tweak it a little, but after how badly the Diamond Back turned out I worry that as I've got this bike riding nicely, what if by tweaking it I just ruin it? I dunno, maybe I'll just do a few small changes, like the seat, the wheels, stuff like that. Actually the seat is something that I have been thinking about changing pretty much since I put it on there. Being black and white it looks really good on this bike which is basically black and white. The trouble is that it's an old BMX seat, and it's made from hard plastic. Being hard plastic it is a bit of a shock when you've spent the last couple of months riding on saddles with even the hint of padding. When I first got back on the Univega the very first thing I thought was that I need to change that seat, but after a couple of days back in the saddle it's not as bad as I thought. However, I do have to stand up while I ride every twenty minutes or so to stop my gentlemans vegetables from becoming numb! Which I can assure you is a very odd feeling. 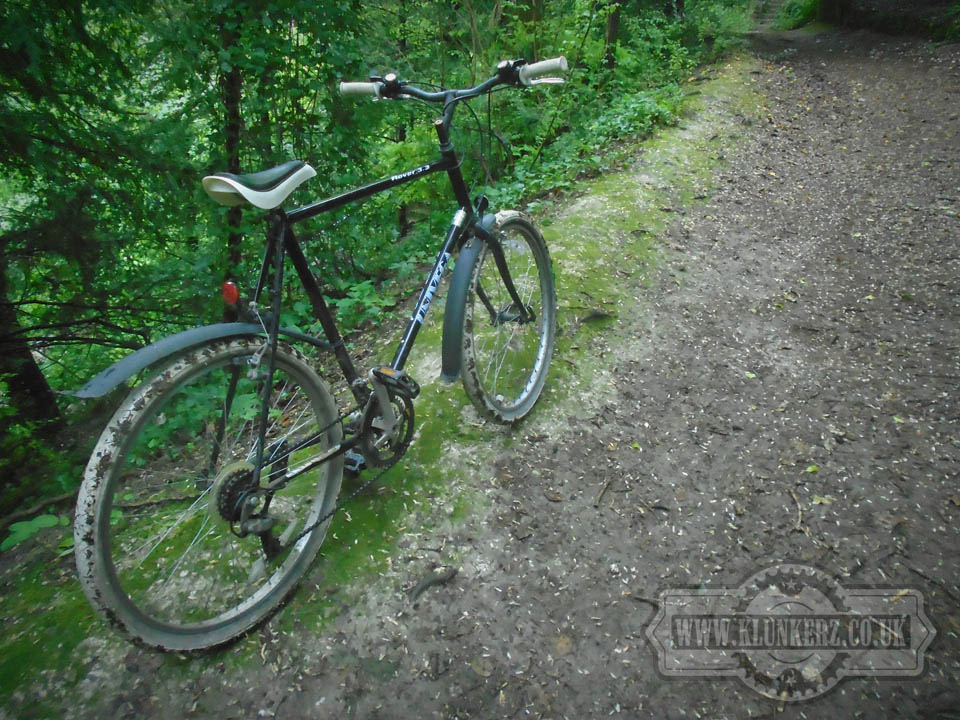 But aside from that I really don't think I need to change anything about the bike whatsoever. What I do need to change, as I've said before is the route I ride. I live on the outskirts of the centre of town, and as such there are quite a lot of road that can be ridden on. However, because nobody around here gives cyclists any room when they riding on the road, I like to ride on cycleroutes, and paths. Since the beginning of the Coronavirus lockdown I have been struggling to find a route, on a path where there are not too many people, and to be fair, I think I've got one now. However it does take in a few sketchy areas where frankly I wouldn't want my two little Monsters riding on their own. But it's been pretty qiuet all in all. However, the other day when it was raining I decided that I might just have a quick blast along my old route along the cycleroute to the viaduct and back. Despite the rain it was a pretty good ride, on the ten minute or so section of cycleroute between the car park and the viaduct its self I saw just seven people. I think that pre-coronavirus lockdown that is a pretty average amount of people that I would normally see on a rainy day on that particular piece of path. For comparissons sake, on an average dry pre-coronavirus day I probably see twenty or so people, and on a busy day, maybe seventy, to a hundred. 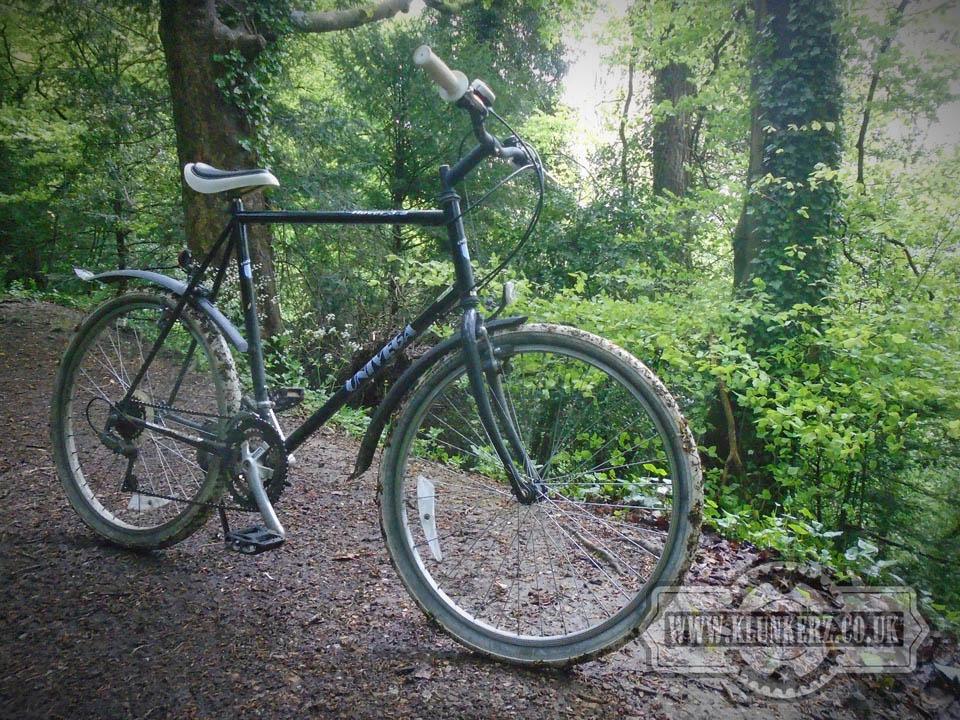 Anyway, like I said, it was wet, and the amount of people I saw was very low. Not only that, but it was the people who I normally see on an average day when I cycle down there, even Captain Mainwaring was there, complete with his new walking stick!

So why bring this up? Well, foolishly this morning I decided that I might give my old route another go. It was a bit overcast when I headed out, but the sun was trying to peak through the clouds. As soon as I hit the cycleroute I could see it was busy. Really busy but I headed on to it in the hope that the people walking would thin out the further along the cycleroute I went. That didn't happen, there was a stupid amount of people out there! I thought to myself that when I got to the viaduct I would head back along the road instead of turning around and doubling back on myself. But I found myself wondering just how many people I had passed. I was over halfway to the viaduct when I started trying to mentally count the people I saw as I rode along. It was a lot! By the time I reached my turning point to head for home curiosity really had got the better of me. I just had to know how many people would I pass on this ten minute or so stretch of cycleroute if I just turned around? I know it was stupid, but I turned around and headed back, counting as I went. Ten minutes or so after turning around at the end of the viaduct I was at the car park at the other end of the cycleroute. I had passed, about (I say about because I took a guess at a couple of groups of walkers I saw) Anyway, I saw about two hundred and seventy eight people!! 278!! Even on a busy normal pre-coronavirus day thats way more than usual!

There were small groups of people of all ages walking, cycling, and skating. To be fair the elderly group of walkers (who I lovingly refer to as the Zombies) where not there. But so much for social distancing.  Another thing that crossed my mind was, where were all these people before the coronavirus lockdown? Why weren't they all out on the cycleroute then? When all of this is over, will they still be getting in my way? My feeling is that once it's all over they won't be coming out and ambling along the cycleroute, my feeling is that they will be going about their daily business instead. Which probably means they won't be going out. It really does seem almost as if the government has said to the people you can't go out because theres a virus out there that might actualy kill you. And the people have gone, you can't tell me what to do, I never ususally go out walking and cycling, but because you've said I can't then I am going to... Unless it's raining, then I'm staying indoors!

This hideous virus won't go away unless we all hibernate for a bit, and that just doesn't seem to be happening... Atleast, not while the weather is good! When I was out and about on my daily ride and it was raining there was pretty much nobody about, but now the Sun's out, so is everyone else! Just madness. I've got to say that I can't help feeling that we're going to spend the whole Summer locked up inside because nobody is doing what their told and so the virus just continues to spread. Only for it to finally go away, and we all get our freedom back just as the weather turns bleak again, and we can't go out. I wonder if this virus had come along at the end of last year when it seemed to be rainy and bleak all the time, would it have died out by now? I mean if the government has said about not going ot because there was a virus out there that might kill you then, would people have looked out their windows at the bleak weather and thought, sounds good to me, I don't need an excuse not to go out in that! I'll just pop the kettle on and put my feet up for a bit and wait for this to all blow over. I reckon that would've pretty much have been the universal response, and not completely ignore it and go about like its some sort of holiday. So I guess what we've discovered is if you want the English public not to go out for some reason, you don't need anything as extreme as a hideous virus that could potentially kill you, you just need it to rain for a bit...