May 22, 2020
There's not really any getting away from it, trying to keep up with my littlest Monster on her Huffy Sweet Thunder while I'm on the Venture Land Rider is no easy task! 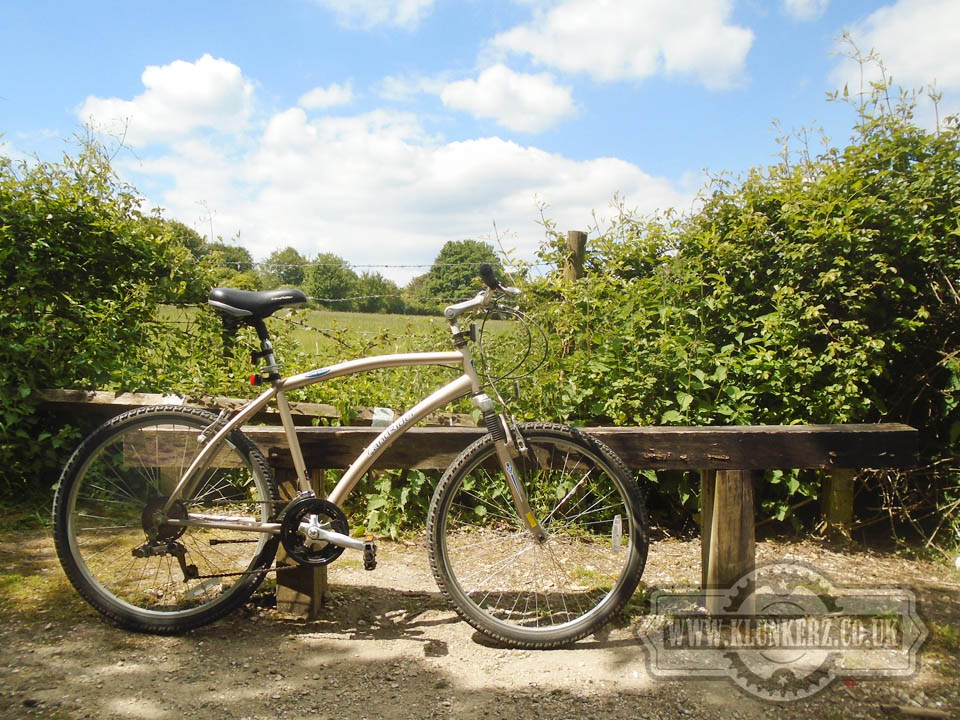 Honestly, she's on a single speed bike with 20 inch wheels, and I've got 26 inch wheels and fourteen gears at my disposal, but because it won't change until I'm pedaling like a mad man, I run out of steam before it changes gear! This, to my littlest Monster is hilarious! I'm furiously pedaling away, and she's casually pulling away from me. Today, on our ride I even got shouted at by one of my cycling buddies. As I passed him as he walked his dog he yelled "Change gear man!!" I yelled back that if it would let me I would! We rode on, and to be fair to it, I think I may well be getting a better workout on this, than on any of my other bikes! I almost feel like I'm running when I'm riding this... Thats not strictly true as I've not run in decades, so in truth I can't remember what it feels like to run, but you get the idea! 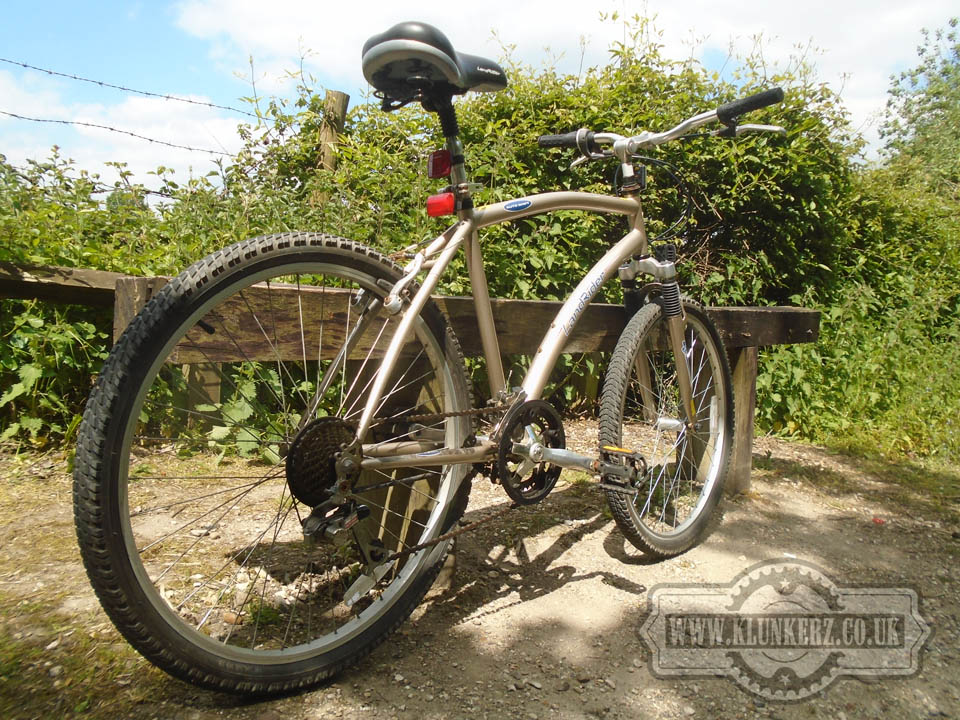 On the way back we passed my cycling buddy again, and, as he saw my littlest Monster first as she passed him he was able to turn to face me as I approached him from the back. As I drew up to him he wanted to know why I was making such hard work of it all, and why I was pedaling so much. I explained to him that it really wasn't through any choice of my own, as it has automatic shift, and therefore, shifts when it's good and ready, rather than when I am. He studied the Land Rider for a while before saying that he'd never heard of an automatic derailleur before, and could he have a go. I felt it only right that he should suffer like I have been, and so pretty soon he was heading off along the cycleroute, and I was sitting on a bench with his Great Dane as company. This pleased my littlest Monster no end who is always asking me when we can have a dog... The answer to that is still never! I like dogs, but as I just can't bring myself to pick up their pooh, we can't have one. Plus the poor thing would spent most of it's life in our tiny little flat on it's own while we were all out working, so it's just not right. Anyhoo, about ten minutes after my cycling buddy headed off on my Land Rider he was back, puffing like an old steam train! "Cheese n Rice thats hard work!" He exclaimed before slumping onto the bench. After he'd caught his breath he told me that he tried to ride along the cycle route at about the same speed he rides his own bike along there, but just couldn't as he couldn't pedal fast enough to change gear! He went on to say that he thought that what I needed was a bigger chainring on the front! I told him that I had reached that conclusion myself, but I've been through my stash, and I've got nothing bigger. He thought about this for a while before saying that he thought that he might have something bigger, and if he did, then it would be mine as in his opinion nobody should be pedaling as hard as that. I must admit, I couldn't agree more with his thoughts, and frankly I will welcome a larger chainring if he has one. 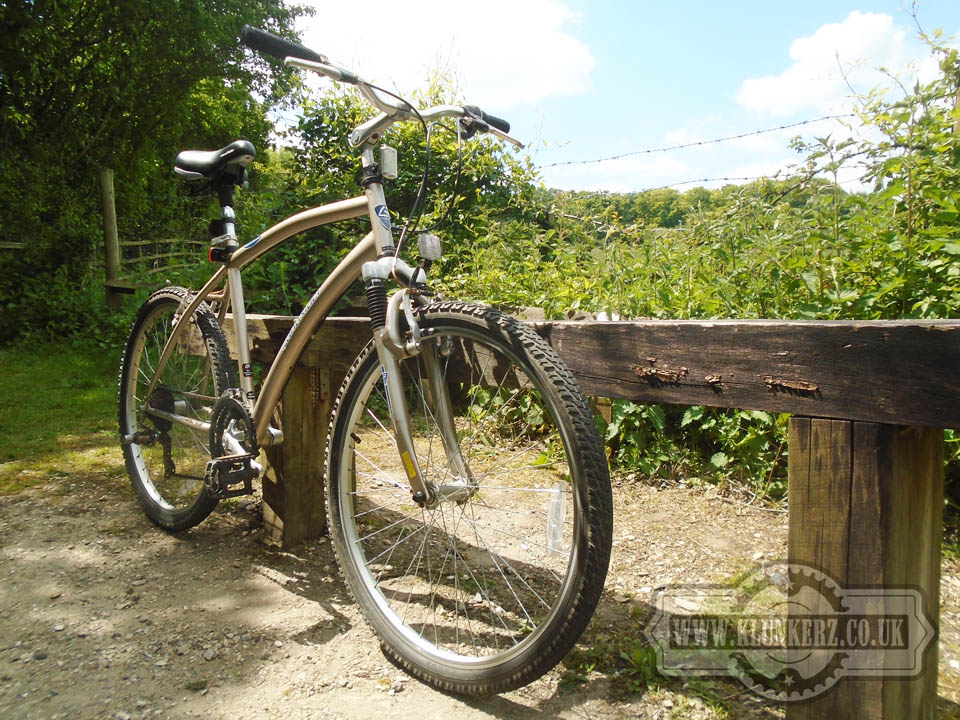 He then wandered off home, and we mounted up and headed off along the cycleroute towards BelongaClint, and a nice big glass of Kool-Aid when we got there.

The thing is, while it will be undoubtedly better to ride with a larger chainwheel, just lately I've taken it out a couple of times on my own, and while it's not a fast machine, it's been quite pleasant. There is no way I'll ever set a fast time on my cycleroute with this bike, atleast not in stock form, but when I'm on my own I'll go as far as to say that it's been quite enjoyable. When you're just cruising along, and by that I mean dawdling along at not much more than walking pace the ride is smooth, and comfortable. The problem with that is that I have single speed beach cruisers for cruising along in comfort, and despite them being single speed they're faster than this, and I'm not pedaling as furiously, with the possible exception of the Coker Monster! But despite all of this I am finding that I am enjoying it more and more every time I take it out on my own. But, due to the lockdown my solo bike rides are very few and far between, so perhaps as it's almost Summer it's time to drag a cruiser of some description out, then atleast I'll be able to keep up with my ten year old!