June 11, 2020
For a long time now I have been thinking, especially in the Winter months that it might be quite nice to have some sort of Beach Cruiser for the wetter ends of the year too. As Autumn comes around every year I start to think about getting another Beach Cruiser, but then, as I've got more than enough bikes to see me through the Winter anyway, thinking about it is usually as far as it goes. 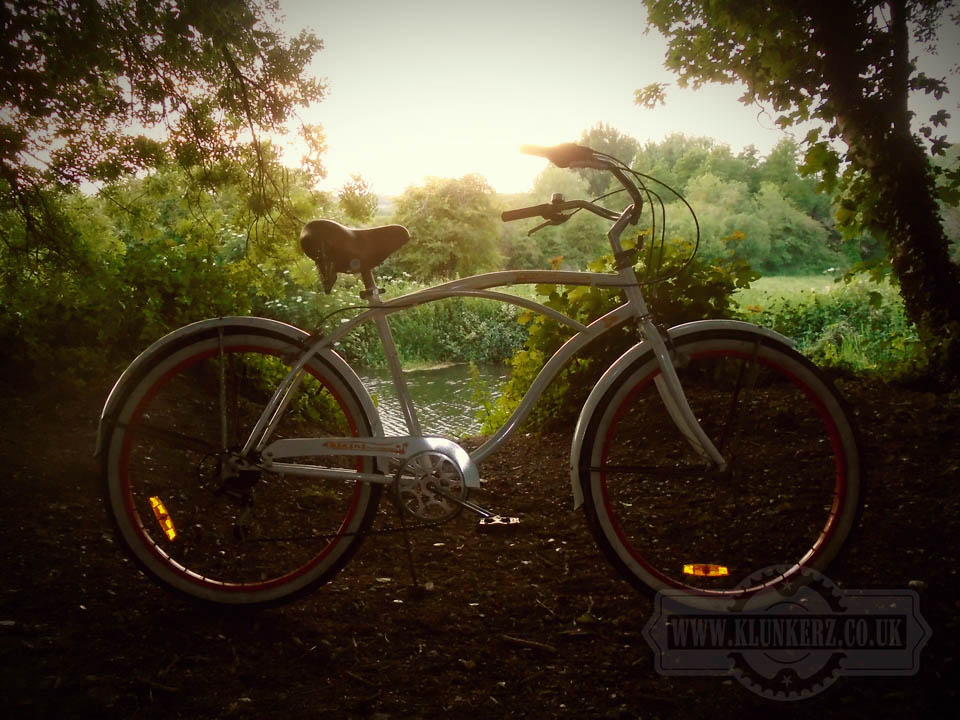 I think that I may well be the King of procrastination, but having been out and about on my GT Dyno recently it really put the idea of a Winter Cruiser to the front of my mind. I thought about what it should be, the list was short. It needed to be cheap, scruffy, have caliper brakes, and derailiuer gears. on to ebay I went, and got out bid on quite a few bikes. I'm not sure whats going on in ebayland, but bikes that I would normally spend between £10 and £30 on now seem to be selling for £50 to £70. I needed to up the ante, plus, I needed to consider driving further than I normally would! 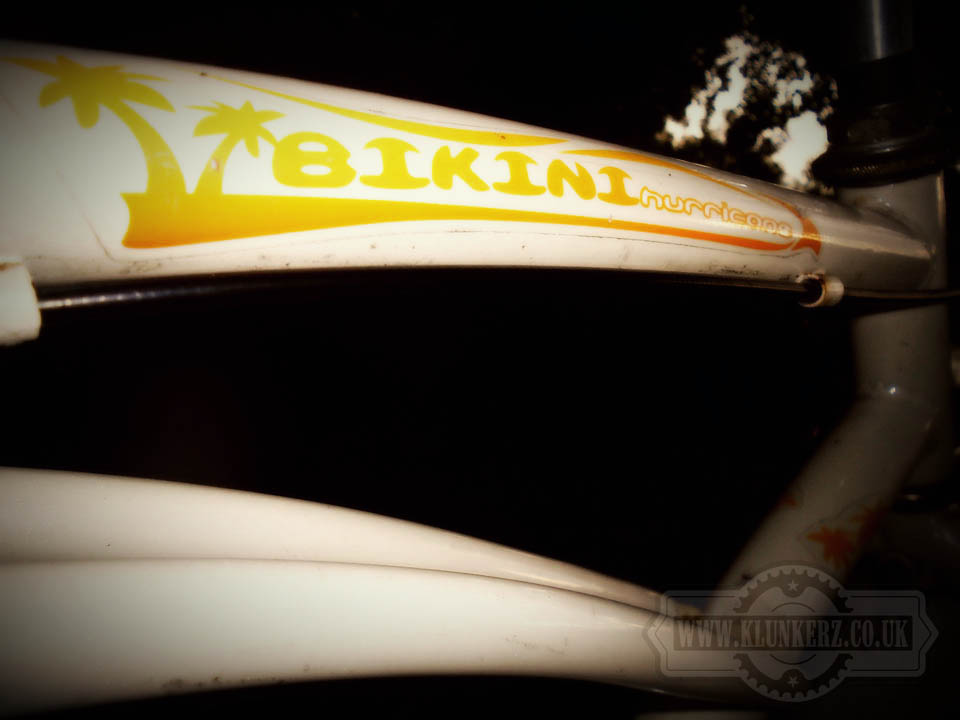 So, ante upped, I poised at the keyboard the other night waiting, watching the final seconds count down on a white Beach Cruiser. As the seconds counted down it was already a bit more than I wanted to pay, but with five seconds to go I stabbed in a far too high bid of £70.01 and hoped that when the page refreshed I would have won it, and also for far less than I was putting in as my maximum bid.
The screen refreshed and at the top was the green banner saying that I had won the auction, the price? £65, which I'll be honest was still more than I was hoping for, but atleast I now had it! I'd had a week or so of frivolous bidding on the bay, and so I arranged with all the sellers to collect my items last night. Lasts nights collections took me from BelongaClint in Winchester, to my first stop just a little village just North of Northampton, then to a little village near Leatherhead, and finally to the middle of London to collect this bike, a Bikini Hurricane... 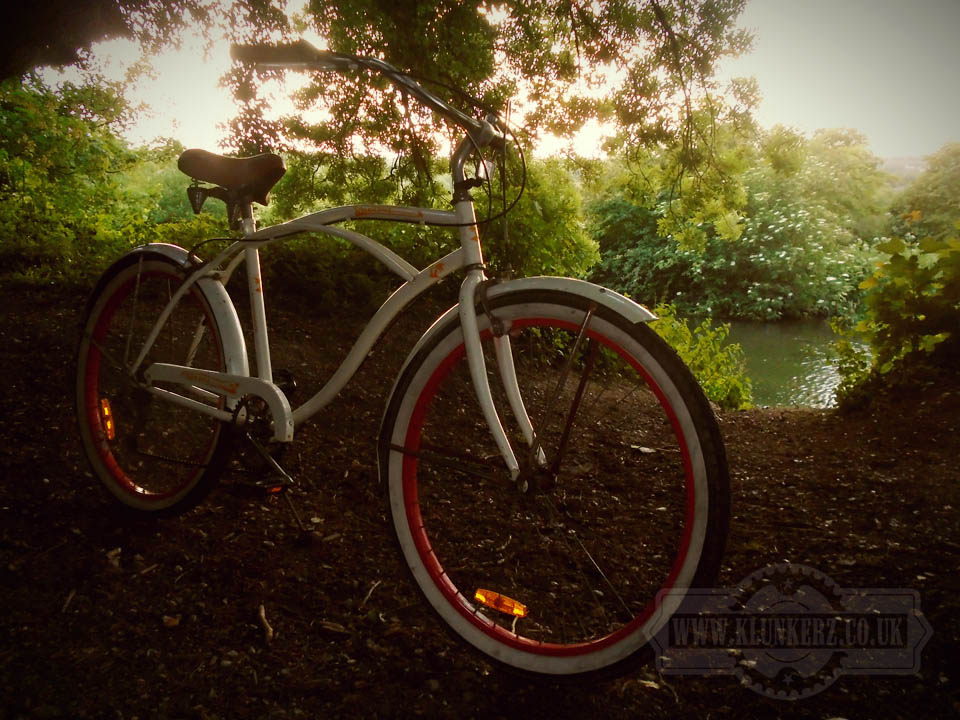 A what? A Bikini Hurricane? The thing is I nearly bought one of these three or four years ago in Germany, as I remember they could be bought from the supermarket REWE, and came flat packed in a box ready for its new owner to assemble themselves, all for about 100€. Anyway, it's probably for the best, if I'd have bought one new I would've probably been a bit precious about it and not wanted to use it in the rain et cetera much like the Dyno Glide! 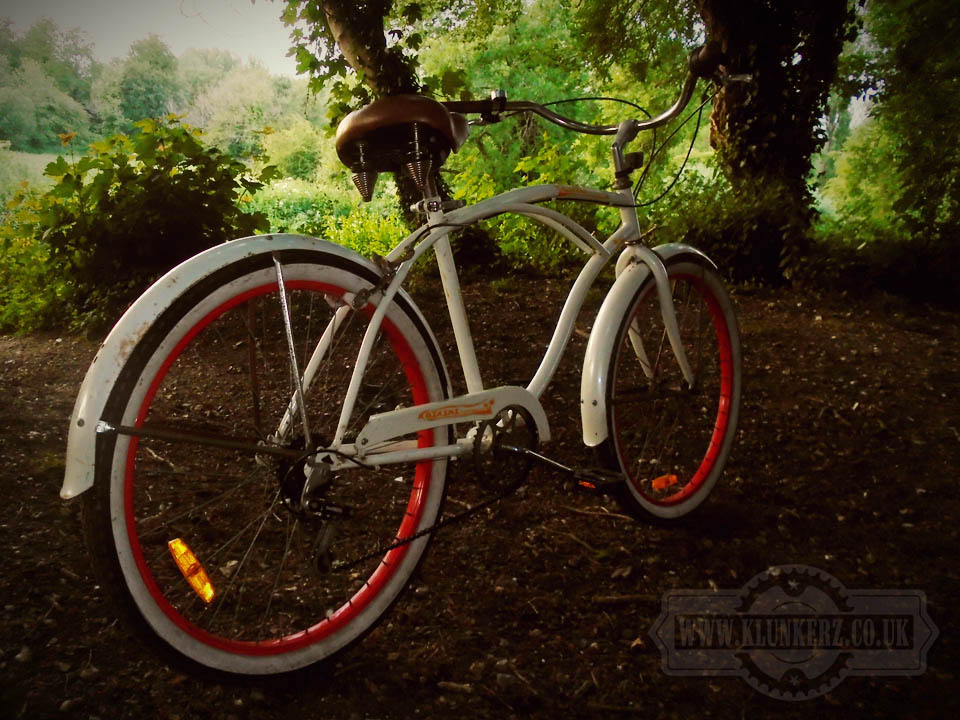 Anyway, by the time I'd got to the middle of London after picking up my other items I was quite late, but the seller still came to meet me to let me collect the bike, and I've got to say that when I saw the bike I was pretty pleased with it. It was far better than I was hoping for, and so I apologised for my lateness, loaded the bike up and headed for home.
Today after a quick look over, and the installation of some new wind in the tyres I thought that I'd take it for a bit of a spin just to see what I was starting out with. It'll come as no surprise to most of you that it was heavy! But as you know thats OK with me, and I did my normal route, then went on my new route too. By the time I returned to BelongaClint I was pretty tired, but very happy with my new purchase.
So, where do we go from here? Well the saddle is broken a little, it's not unuseable, its just one of the springs, and to be fair I planned to change that anyway, so thats gonna go. The mudgaurds are a bit dented and a little rusty, but like the saddle I planned to change them too to something a bit more mountain bike like. Also the handlebars may well get changed as well, I'm not sure what to yet, I'll have to go through my stash, but I'm thinking something like the handle bars on a normal touring/road bike, or possibly, some eighties mountain bike bars depending if I have any in my stash. I may well even change the wheels at some point, again, depending on what I have got in stock. But basically I plan to ride it a lot, and tweak it as I go, because frankly, it's perfectly good as it is, and I love it!