July 20, 2020
No rest for the wicked... I mean, that's what they say don't they, and going by that saying I must've been very wicked at some point indeed. Insomnia, no sleep disease, I must've suffered from this on and off all my life, even as a child I would struggle to fall asleep at night, and then wake up at stupid o'clock in the morning and not be able to nod off again. The problem seems to be that I go to bed tired, and then as soon as my head hits the pillow it's like turning on a switch, Hello!! My brain wakes up! It seems to be worse since the whole lockdown thing, and my poor efforts at home schooling. I kid you not, my Ofsted report is going to be shocking!
Anyway, last night was yet another sleepless night, as I crawled into bed and laid down my brian decided that now was the time to wake up, and start thinking about anything and everything. I wrestled with it for a while but the main topic of thought seemed to be the pedals on my GT Dyno Glide, and why I had not yet replaced them. 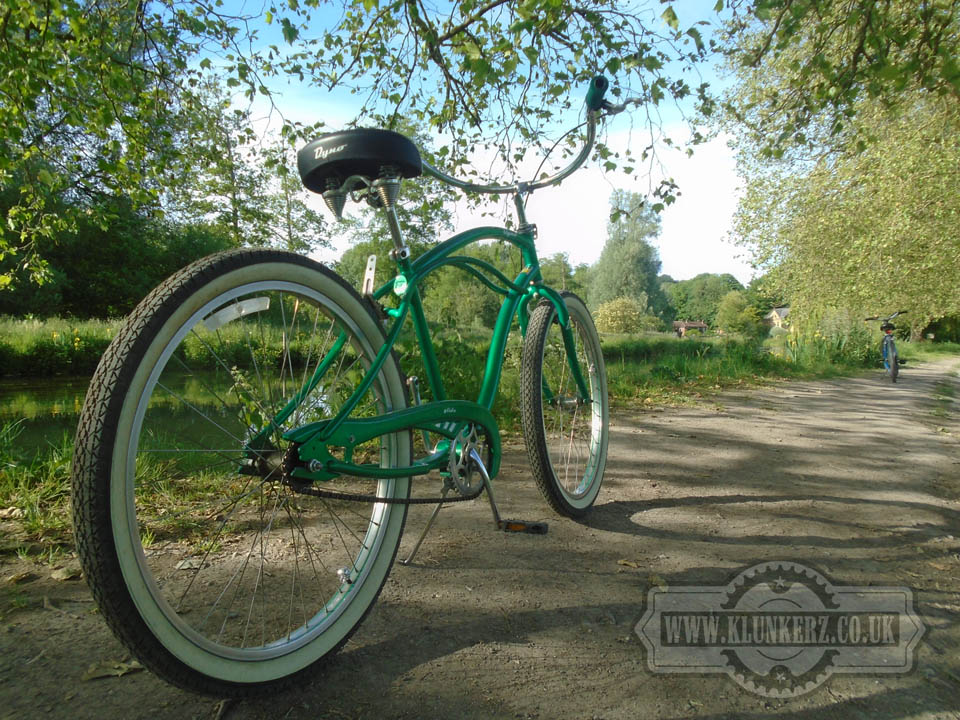 Crazy really, I've had the replacements for over a week now, and could've replaced them at any point over that last week, but now is the time that my brain thinks I should be getting on with it. I looked over at Mrs Clint, who although was sound asleep was snoring like a rusty band saw with damaged bearings. Honestly I'm sure it would've been quieter if I'd have slept at the freight yard by the railway! I looked at her, and wondered if perhaps it would help her snoring if she was breathing through a filter. I looked at her bandana, and surgical face mask and wondered if they would make any difference. My feeling was, after careful thought that they probably would do next to nothing, what she needed was something with a bit more filtering action, and pretty soon I knew just what would do the trick... A pillow!!
By now it was 03:00hrs, and frankly I didn't like where my train of thought was taking me, I decided to get up, pour myself a glass of warm milk, have a couple of digestives, then give the sleep thing another go. With that done I headed back to bed, Mrs Clint was still snoring like a bear in the woods, and as I laid down beside her once more the thought of pedals returned to my mind. Ridiculous, and I tried to shift it but the fact of the matter was that this little thought was there for the night. 04:17hrs, and now the birds in my back yard had joined the fun with their early morning chirping. This was it, there was obviously no sleep for me tonight I thought to myself. I got up, picked the new pedals up from the dining room table and headed downstairs to drag the Dyno Glide out for a pedal swap. 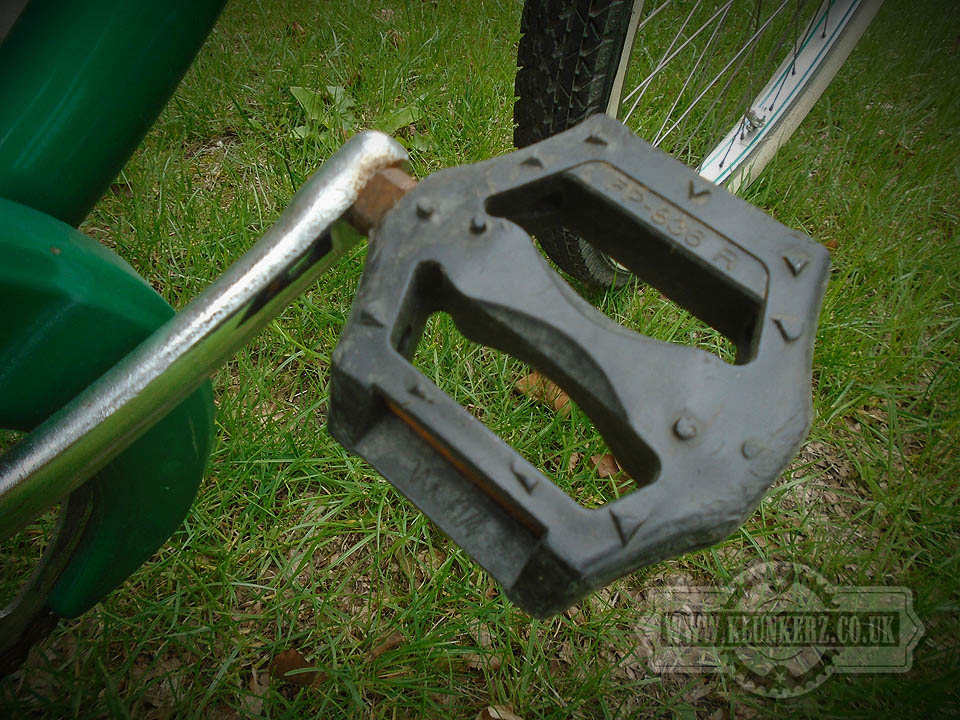 To be fair to the pedals that I had hastily fitted, they're not bad, although my shoes don't seem to grip them as well as they should and they tend to slowly creep forward on the pedals as I ride along. But in all honesty that's not the main reason for changing them, the main reason is that they look awful! on some scruffy old mountain bike, BMX, or even beach cruiser they'd probably look fine. But on my shiny Dyno Glide? Terrible! They had to go. What I had elected to fit in their place was these... 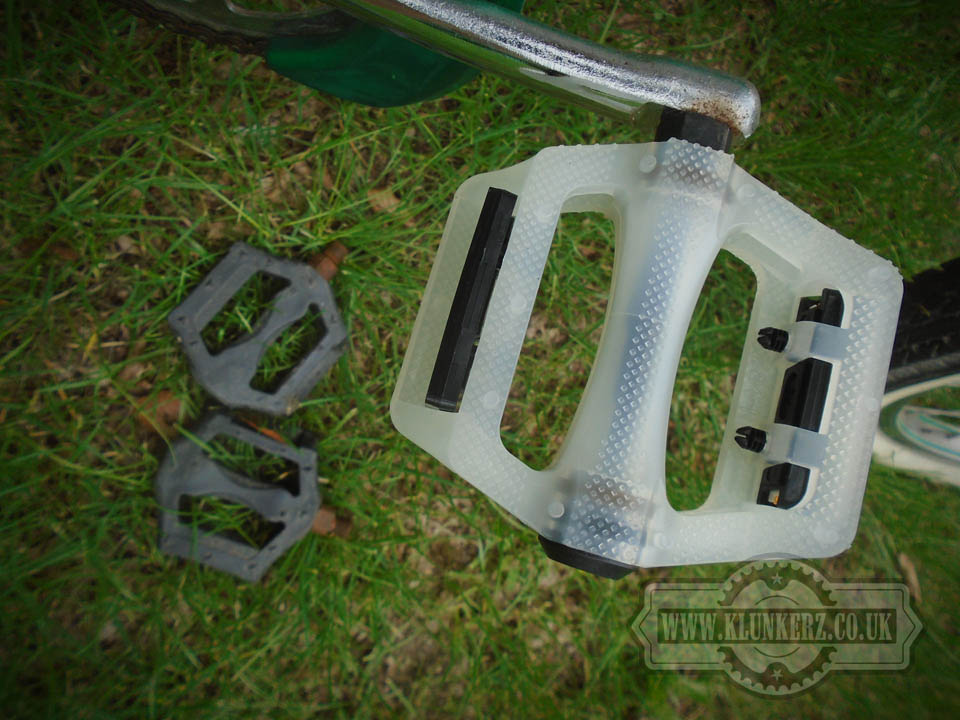 Which were not exactly what I wanted either, and not a whole lot different to the black pedals I was taking off, but somehow I thought they would be better. What I really had in mind was a pair of old BMX Victor VP-565, or Victor Beartrap pedals, but because I was being a cheap-ass I elected for these plastic knock-offs instead of the nice aluminium Victor pedals. In fairness to the cheap plastic knock-offs they were less than a third of the price of the Victor pedals, they look better than the black pedals, and my shoes grip on them while I ride along. Wth the new pedals installed I decided that as it was only just 05:00hrs I may aswell go for a test ride. I headed out, it was a bright clear morning, and refreshingly cool. Another thing that I found quite refreshing was the complete lack of people about, on my regular cycleroute there was nobody about, just me and the birds. Even those pesky flies weren't up yet, and so despite not wearing my bandana I didn't have a breakfast of fresh flies and bugs which made a nice change. 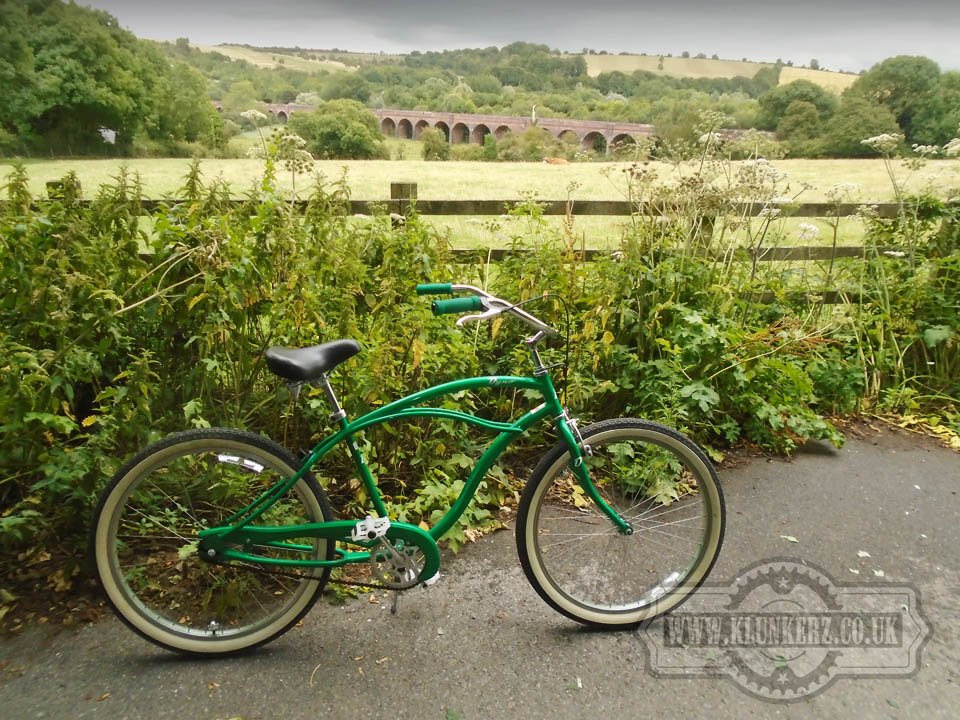 Just the sound of my Beach Cruiser tyres on the ground as I rolled along, bliss. But as I reached the point in my ride where I turn around I felt a couple of spots of rain on my bald head. Ahead of me the sky was bright and clear, but as I turned around it was the exact opposite, dark and cloudy! Bugger, my Dyno Glide has never been ridden in the rain before, and frankly I didn't fancy starting that now. As the rain became more intense I decided to take shelter under a large tree, and wait for the shower to pass. Twenty minutes or so later, and still relatively dry the rain had ceased. My thoughts turned to getting home, and a nice big bowl of porridge when I got there, I was starving. The ride back to BelongaClint was good, although I was getting dirty spray from the pavement on my frame and up my bum and back, but it was atleast still blissfully quiet. Except for the bizarre noise that my tyres were now making on the wet pavement. I've never heard such a sound before. But then, I've never ridden on these tyres in the wet before. The sound was almost like the sound of a thousand people popping bubble wrap as I rode along... I kinda liked it!
By the time I was pulling up back outside BelongaClint my frame was splashed in dirty water, and my light coloured cargo shorts were a complete write-off. I carried the Dyno Glide upstairs to our lounge, and popped my shorts into the washing machine. My feeling is that the new muddy racing stripe is probably going to be them for good now! With the shorts in the wash, my porridge gently warming on the stove top I set about cleaning the Dyno Glide with kitchen roll before Mrs Clint woke up and found out what I was up to. I sat there, admiring it as I ate my porridge, it really is a thing of beauty to my eyes, and with my porridge devoured I set about giving it a good polishing with Mr Sheen ready for another ride when the pavements are dry.