I've had the Bikini Hurricane for about two months now, and it's safe to say that I have been enjoying it. I'm pretty sure that it's not quite built like the idea of it I have been carrying about in my mind yet, mainly because as I go through my stash the idea constantly evolves. But it's getting there. 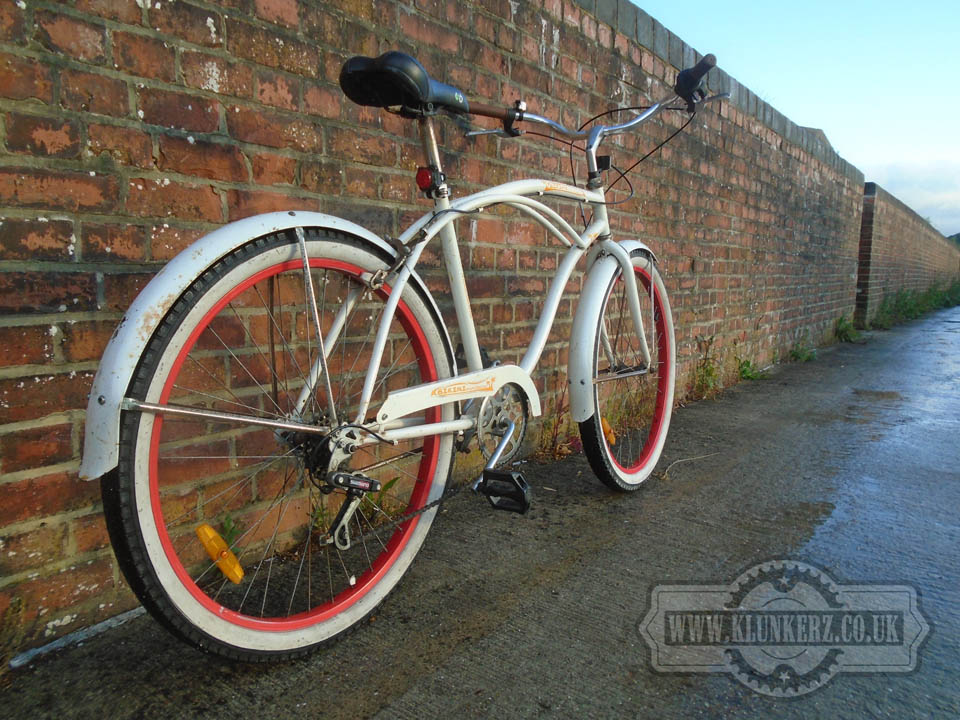 When I wrote my last post on this particular bike I was babbling on about changing the saddle and the handlebars. Digging through my stash I found myself a more comfortable saddle. 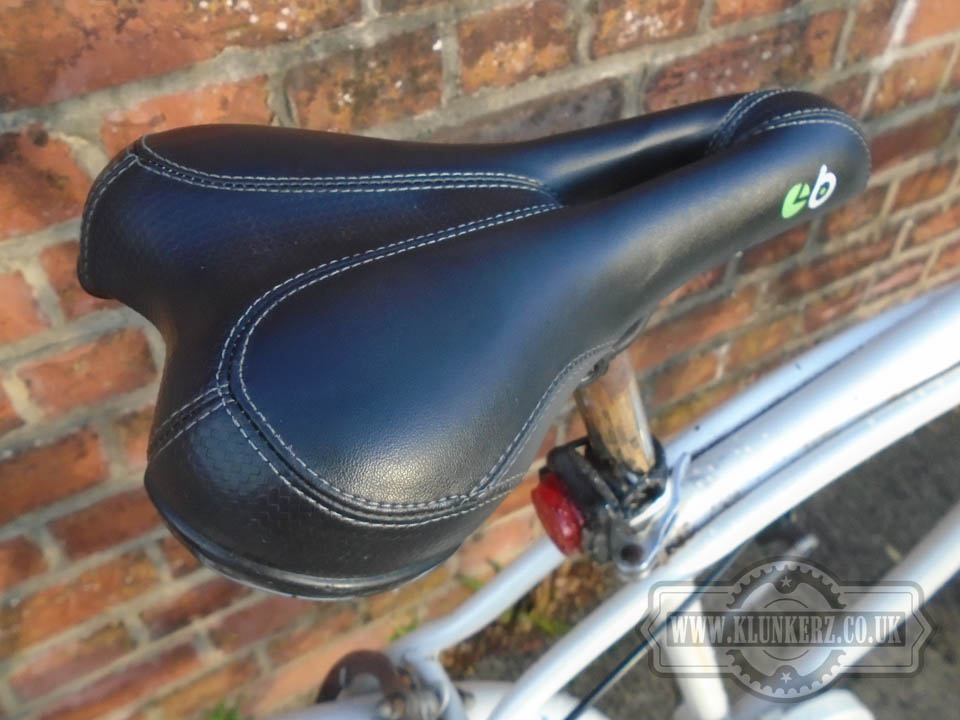 Not that there was a whole lot wrong with the original saddle, it's just that for some reason or another these big cruiser type saddles tend to give me chub-rub on the insides of my thighs if I ride them for a long time. So switching it out for a smaller saddle with the hole in it so my gentlemans vegatables don't go numb made good sense to me. All this being said though, and as comfortable as this saddle is, I may well still change it again at some point. 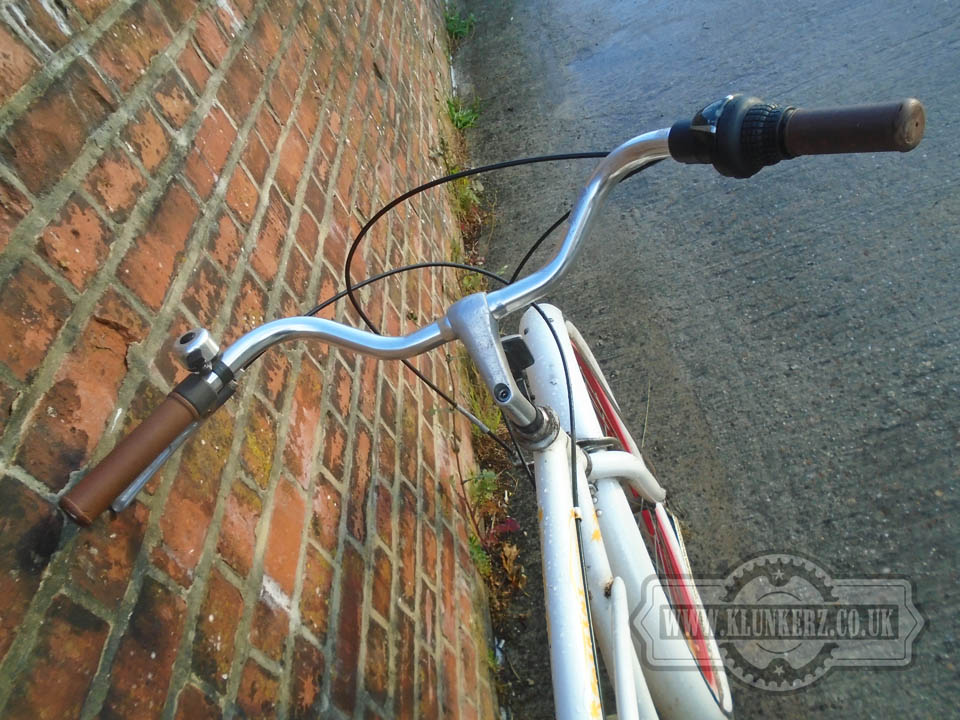 I'll admit that even after I'd found a different set of handlebars I still ummed and ahhed about whether or not I should change them. But that decision was made for me when a fella who was buying some bicycle projects from me tried to buy the Bikini Hurricane. I turned him down, but then he said that he was really only after the handlebars. He followed that up by offering me almost as much money for the handlebars as I'd paid for the whole bike. So I was quickly out with the tools, and five minutes later my bike fun fund was topped up, and he had himself a new set of beach cruiser handlebars.

Taking the Hurricane out with the new saddle and handlebars I was pretty happy with it. But while I was sifting through my stash of bike parts I had come across a pair of mudguards from an ugly b'twin mountain bike that I have long since dispatched. 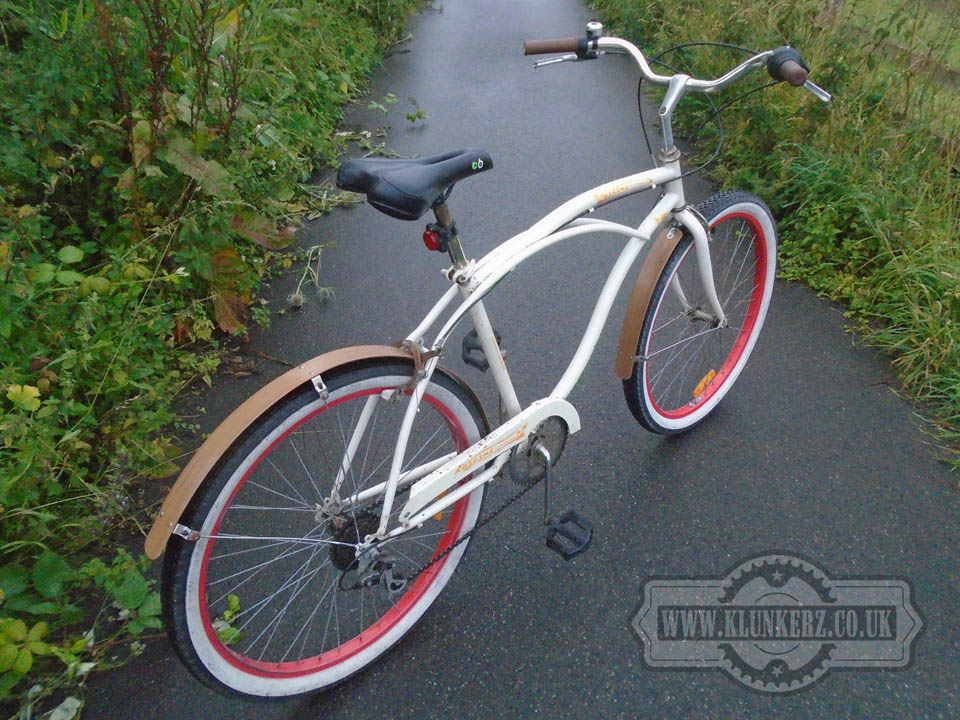 They are basically a flat piece of plastic with a faux wood grain finish. I kept looking at them, but my feeling was that as good as they look (to me) I couldn't help feeling that they were going to offer me very little protection from water splashing up off the tyres because the sides of the tyres are not enclosed like they would be with the standard metal mudguards. 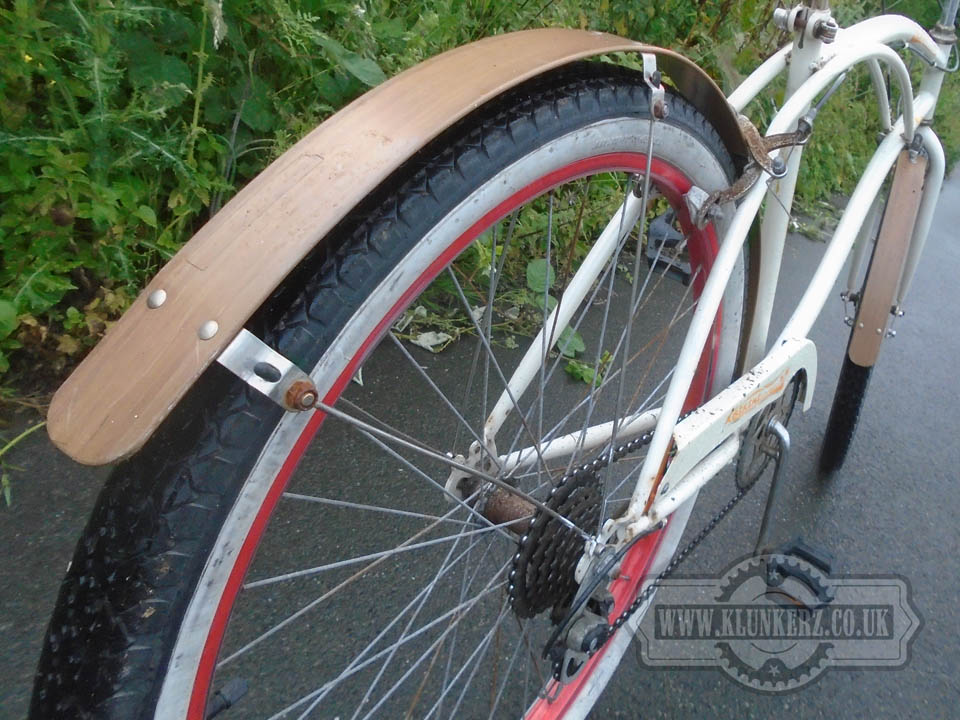 But as ever curiosity eventually got the better of me, and as the metal mudguards are dented I figured that I might as well give the faux wood mudguards a go. Besides I kinda liked the look of them on the b'twin, and infact it was the reason that I had bought that bike in the first place, so I felt it would be a shame not to use them, or atleast give them a try. 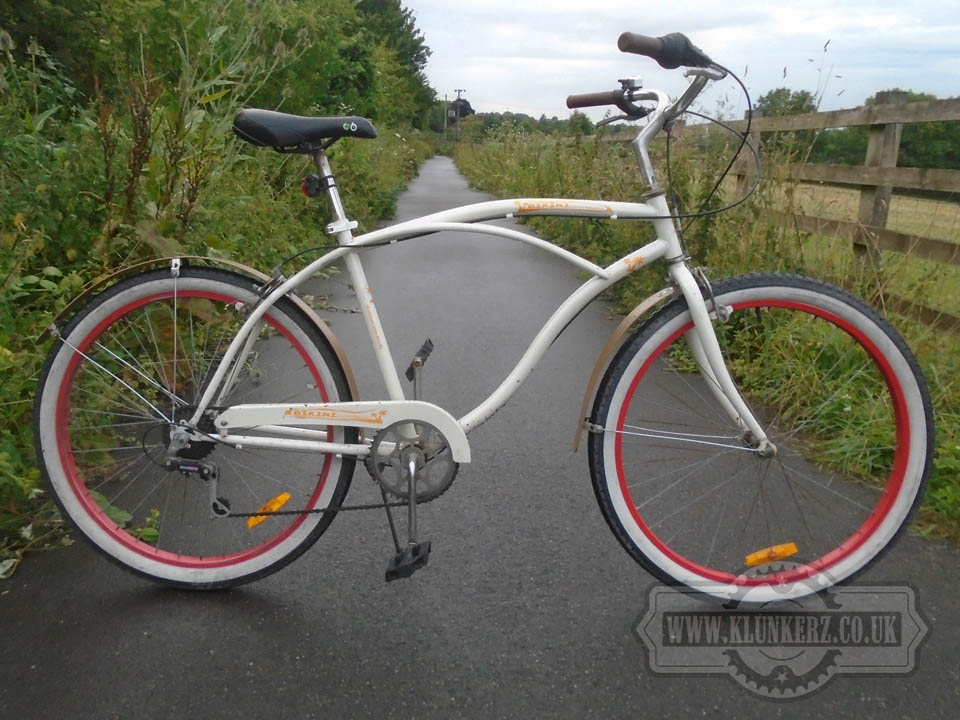 Well if the truth be known I really quite like how they look on the Bikini Hurricane far more than I did on the b'twin. I like how, although I still have mudguards they are quite minimalist, and dont detract from the over all look of the bike. But, because of the rear brake caliper rubbing on the rear mudguard when I brake it seems to somehow make the mudguard move until eventually the front part of the mudguard has flattened out, and is rubbing on the rear tyre. This, I'm sure you can imagine is not ideal, and having to stop every five minutes or so to adjust the mudguard becomes irritating quite quickly. However digging through my stash I have found a set of mountain bike wheels with disc brakes, and I feel that fitting those would alleviate the problem, so that might be a route I'll explore in the future. Especially as the brake blocks seem to have disintergrated since I bought the bike, so they need replacing anyway. My feeling is that they were probably on the bike since new, and the rubber has broken down, and added to that they're now trying to stop quite a lot of weight of a fat middle aged man rather than the slim young woman who previously owned it. So something needs to be done.

As for the efficiency of the mudguards themselves, well I'm pleased to report that despite their quite minimalist appearance, and the fact the the tyres hang out on either side a little bit to my surprise they do seem to keep the water off my lardy arse. Like the Dyno Glide that I got caught out in the rain on the other week, I once again found myself listening to the bizarre noise that my tyres were now making on the wet pavement. Before being caught out in the rain on my Dyno Glide, I'd never heard such a sound before. But then, like I said before I've never ridden on these tyres in the wet before. once again I found that as I rode through the countryside my ears were trained on the cacophony that was almost like the sound of a thousand people popping bubble wrap as I rode along... I really do kinda liked it! But better still, while I was listing to that amazing sound the rather minimalist b'twin mudguards managed somehow to keep my lardy arse dry. Unlike the the muddy wet stripe that my Dyno Glide awarded me with due to being fenderless.

So that's where I'm at... Sort of. It would appear that Mrs Clint has taken kind of a shine to this little beach cruiser, as on several occasions when I've come home planning to go out on it I've found it to be m.i.a. I think, like many things that I have bought in the past, that she has got her eye on it. But I don't think I'm giving this one up without a fight. So the search has begun to find Mrs Clint her own beach cruiser, which will bring the number of bikes in her collection up to four. I find myself wondering just how many bikes she needs, but then I look at my ever increasing number of bikes that are piling up in our back yard and think it might well be better if I just keep my mouth shut... For now!