Racing bikes, they're not for me, with one racing bike already in my collection, the Ernie Clements, why on Earth would I be torturing myself with another one? Especially as, if it's torture I want I've got the Torpedo Flyer to inflict upon myself. Well, what we're looking at here is the result of curiosity... 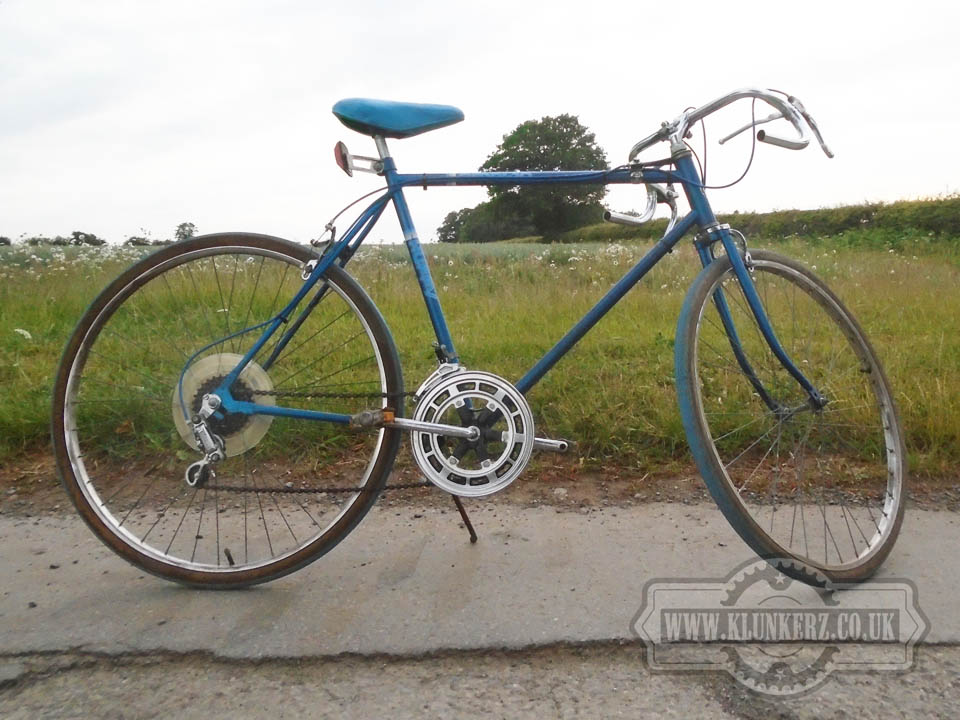 Back at the begninning of Summer I saw this little thing of beauty advertised on fleabay with a starting bid of £50. Now, there were several problems to this, firstly it was a fair old distance from home, and secondly, I didn't really want it. But I did want to know a bit more about it, so I asked the seller a question. I asked him if he had ever had, and sold a pink Huffy Sweet Thunder. No reply came, probably because he thought I was some kind of crackpot! I mean, who asks a question like that? Well, me, that's who. 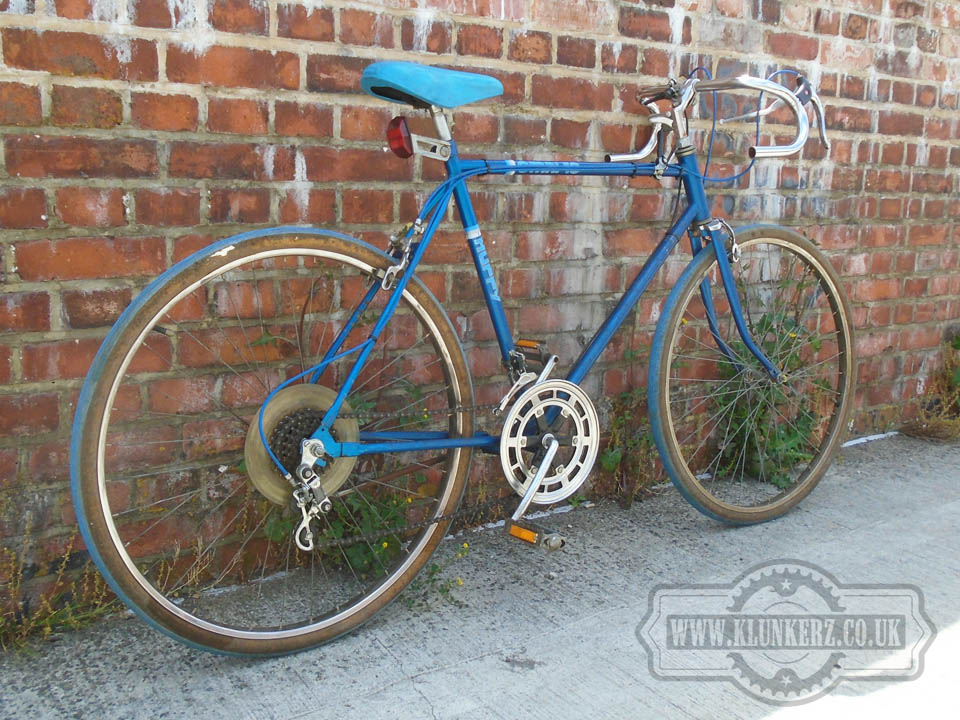 The reason I asked this question was that my Cousin who we suspect had the Huffy Sweet Thunder that I bought just over a year ago replaced that bike when she outgrew it with, yep, you've guessed it a Huffy Omni-10. Now, unlike the Sweet Thunder which was sold in America back in the eighties by my Uncle, the Omni-10 did come home with my Cousin when they all returned to England later that decade. However, my feeling was that in no way was this the same guy who sold me the Sweet Thunder, but I had to check. Anyway, there came no answer from the seller, and the listing ended without bidders.

Every time he re-listed it, I once again asked the question about previous Pink Huffy Sweet Thunder ownership, but I never got a reply. Honestly I asked him weekly, he must've thought I was on the run from the bozo barn, but he never replied. Honestly, if I was the seller I would've atleast said 'No' just so I didn't keep being bothered by this moron! But no, never any reply.

The seller continued to re-list it throughout the Summer every time the auction ended, always for the same starting price, £50, and continued to ignore my moronic questioning, and so, after four months of him listing it for £50, and me asking a dumbass question, curiosity had finally got the better of me, and as the seconds counted down at the end of the auction a couple of weeks back I decided that it was about time I bought it. I felt that it was pretty much a certainty that I was going to get it, but I still sat there ready to stab my bid in, in the last five seconds of the auction. It all adds up to the excitement of it all for me! 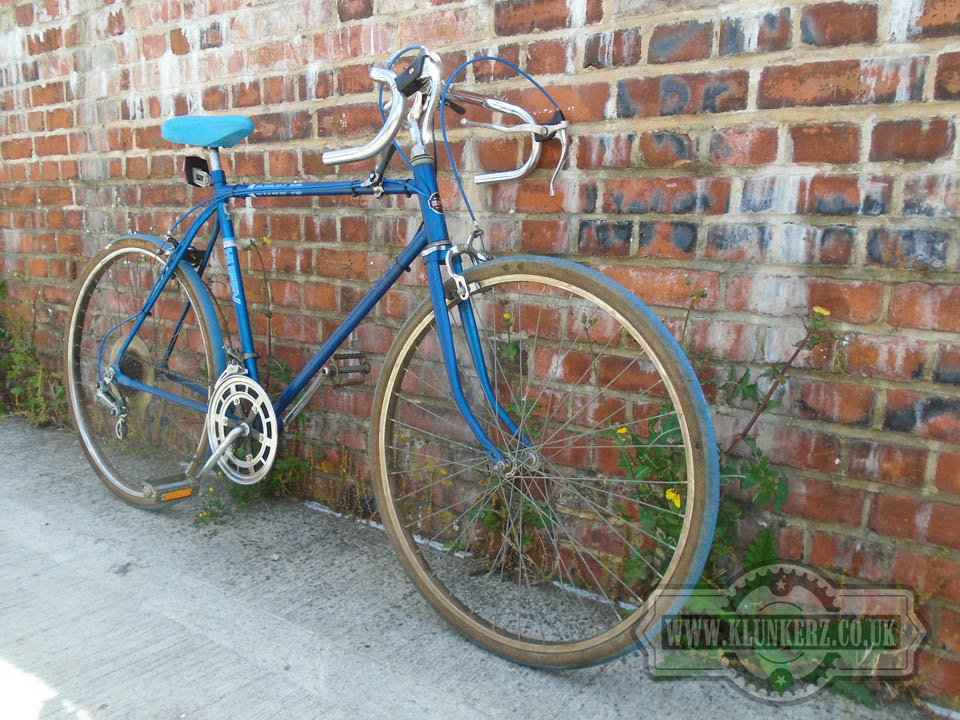 With the Omni-10 safely won I contacted the seller and asked for his address. He responded straight away, and told me that I'd got a bargain there! Hmm, I wasn't so sure, if it was a bargain surely it would've been snapped up when he first listed it four months ago, but anyway...

So the following week I headed off on my nearly 300 mile round trip to collect a bike I didn't really want, but needed to buy to satisfy my own curiosity. When I got there the seller opened the door of his garage and there it was, he looked at me and said, what do you think? I said it looks great, but I was wondering, did your kids ever have a Pink Huffy Sweet Thunder? He looked at me and said, D'you know, thats about the only question I've had about this bike. Why would I have had one of those? I don't even know what one of those is! So I took him through the whole story about my Cousins Sweet Thunder, how I now have it (probably) even though it was sold in America nearly 40 years ago, and how I wondered if this was my Cousins bike also. He listened to my story, before saying no, his kids had never had a Huffy Sweet Thunder. Then he asked me if I still wanted to buy it. Well, I'll be honest, with my curiosity answered the Omni-10 had lost its allure somewhat, but I had driven the best part of 150 milles to get it, I did have the cash with me, and I still had the best part of 150 miles to drive home. So, as I'm obviously some sort of addict, I bought it.

As I loaded it into the back of my Navara I was feeling a little bit deflated to be honest, but I asked the seller if he'd had it from new? No he said, he bought it second hand from some fella in Cranleigh in the mid nineties when he lived there! Well that piqued my intrest a bit, that's where my Cousin and her family moved to when they returned from America in the late Eighties. So now I'm wondering, once again if infact I have just bought another one of my cousins old bikes. I'll be honest, I'm not as interested in this as I was in the Sweet Thunder, and I wasn't even looking for this one, I was on my Beach Cruiser search and so was just typing in words like 'Huffy' into fleabays search when it turned up. But, if it does turn out to also be my Cousins old bike from nearly thirty years ago, that's still kinda cool I think. 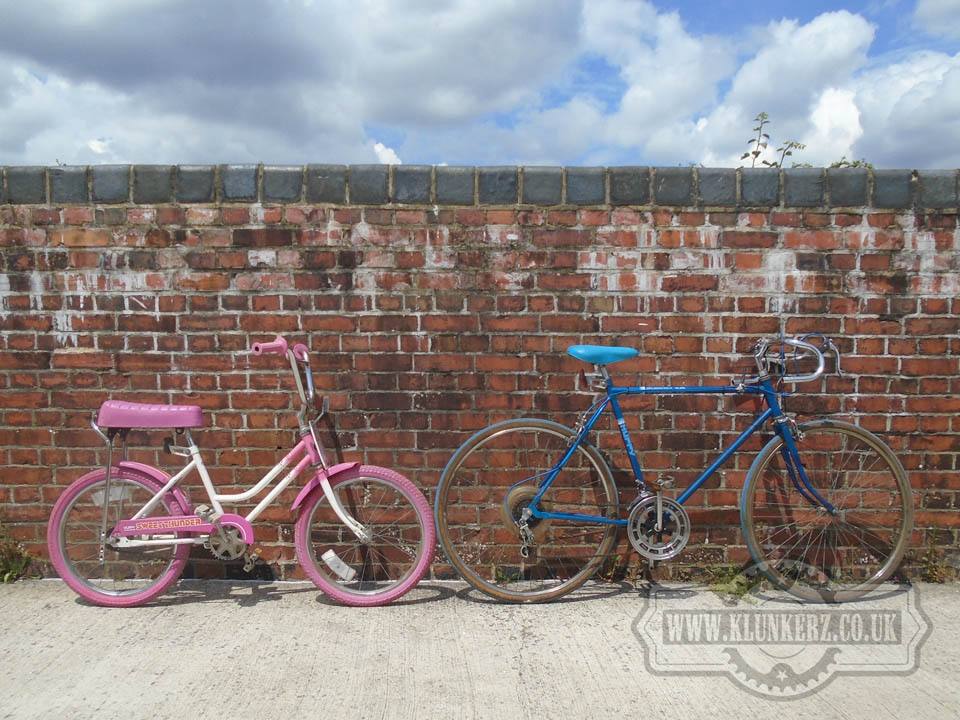 Anyhoo, it was ready to ride when I collected it, and so, once back at BelongaClint my littlest Monster and I headed out on our Huffys together, mainly so I could get a few snaps of the two bikes together.

So how does it ride? Well, pretty good actually. It's big enough for me, although it is on the small side of being big enough for me to ride, but, and I know you'll find this hard to believe, those dropped handlebars... They've gotta go! So, once back home I've dug a couple of sets of bars out of my stash to try on my new Huffy and so, for the time being atleast I'm going to keep it, and ride it. I can't decide it it is actually a pleasure to ride, or just because it's so much nicer than the Torpedo Flyer, but I like it, and once I've done a little fettling I'll probably like it whole heap more. As for whether or not it was previously my Cousins, I don't know, it looks like it probably could be, but as I don't know if Huffy were selling bikes here in the UK in the nineties or not. But if they wern't I'd say theres a fair chance my Cousin owned it first. But sadly since lock down I've not seen her so that she can look at it. Although I have sent her photos of it, and she thinks it's a definate maybe, especially as she thinks the gear lever repair and set up has all the hallmarks of her Dads handiwork. But in all honesty, until she's had a look at it, it's a job to say. So for now atleast, after a little tweaking of my own it's mine to ride, and enjoy. As ever, updates as they occur!