To be honest, I think I'm there with this thing, I've taken it as far as I can without spending money on a thing that is quite frankly junk. 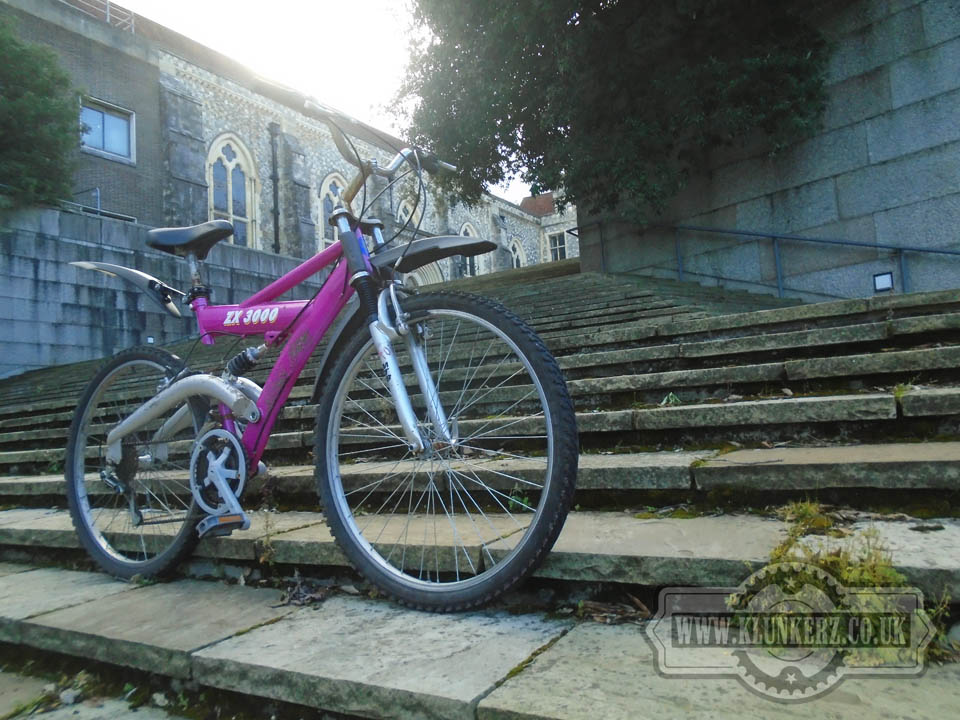 I really am into just tiny tweaks now, and this weeks final tiny tweak was to just tighten up that rear spring as much as I can. I have now wound the preload adjustment collar from the end where the spring is least compressed, all the way to the point where the thread runs out at the other end where the spring is compressed the most. Has it made it better? Well, yes it has, the more compressed that spring is the less bouncy the ride. My feeling is that if I were in the demographic that this bike is probably aimed at (a teenager with less weight than I) then my guess is that now the rear swing arm would hardly move, if it moved at all. But with my 18 stone lardy ass bouncing up and down on that saddle that spring is getting a pretty good work out. 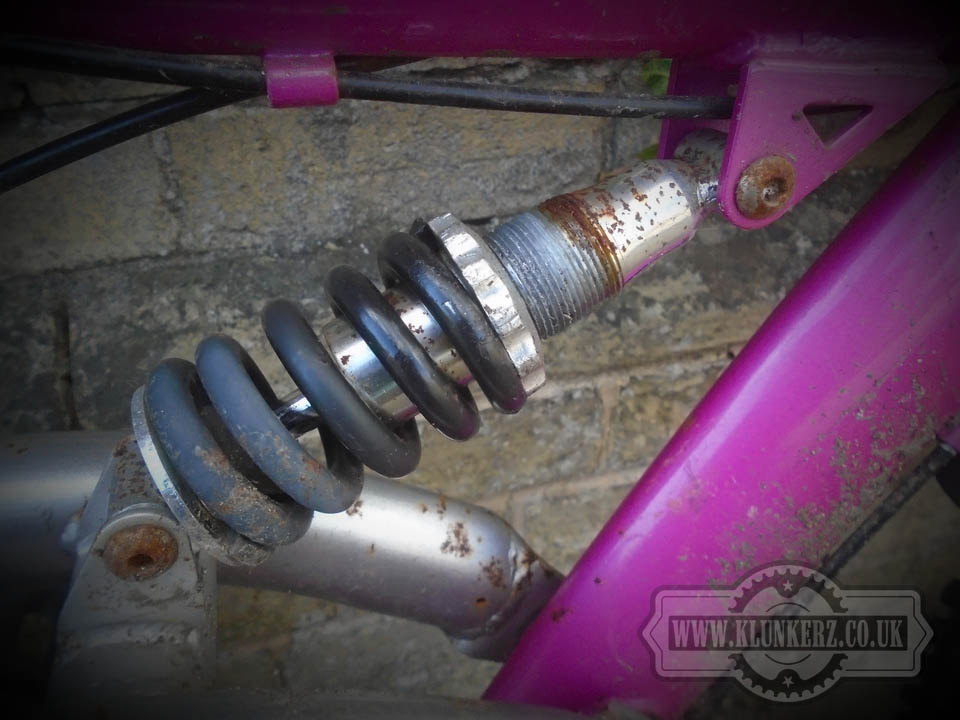 With that thought in mind I had been thinking about trying it out on a set of steps that I've not ridden down in the best part of ten years. Infact, the last time I attempted to ride down these steps I had my biggest Monster, who was five at the time on tow behind me on her tag-a-long. I remember pulling up at the top of the steps with her on the back and she just said, No, Dad, no-o-o-o-o-o-o-o-o-o-O-O-O! as we started to go down them.
Since starting to ride the Torpedo Flyer I must admit I have wondered what it would be like on these steps, and so today I thought it was time to give it a go. 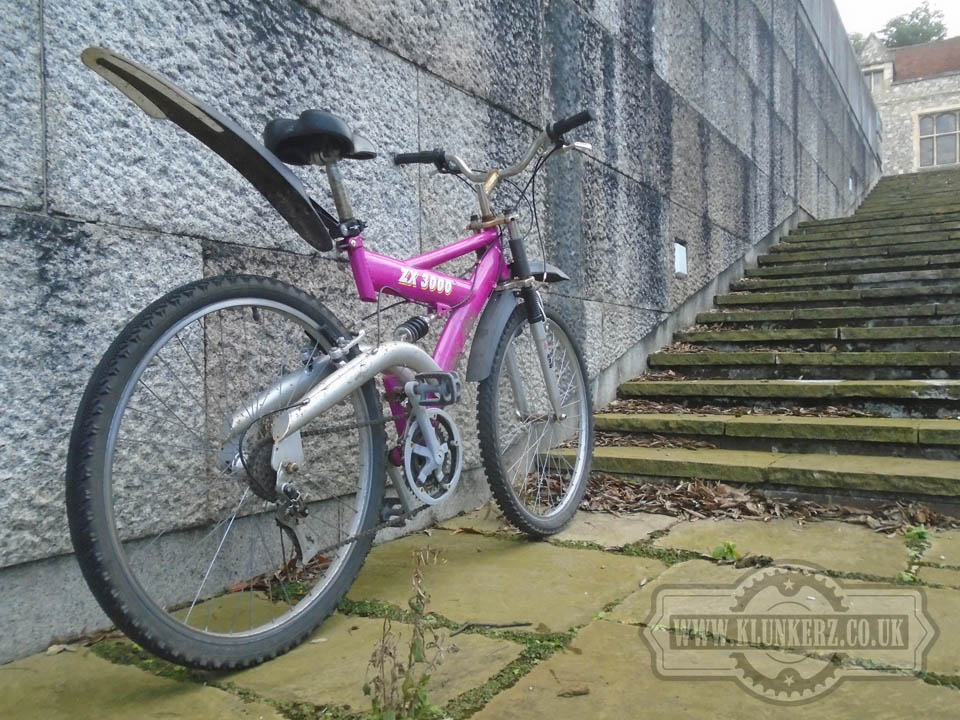 When I arrived at the top of the steps, despite them being a fairly shallow flight of steps, they do go on for a long way. Like I said, it's been a fair while since I've been down them, and I've never ridden down them on anything with full suspension, or as rubbish as this. But I figured that if the Torpedo Flyer broke then that would be the end of the story as far as this thing goes, so in a way, thats kind of a win in my book! But then, what if it bucked me off and I broke. A fifty one year old fat man probably wont recover as quickly as a kid, or even as quickly as a forty year old slightly less fat man did.

In then end, after about ten minutes of standing there looking at it I figured I should give it a go, so with my lardy arse hanging off the back of the saddle for better weight distribution, and my fingers pulling slightly on the brake levers I set off. Bounce bounce bounce bounce! There was a fair bit of movement from the rear swing arm, but despite my heavy load that rear spring didn't seem to be compressing to its fullest. Up front however was a completely different matter, on every step the front forks went clack clack clack as they hit full compression. I really wondered if by the time I got to the bottom would they work at all, or would they just be fully compressed all of the time. I didn't care, I figured that I probably have just the one ride left on this thing, then I'm done with it.

About half way down the steps I figured that it was going fairly well, and so, hanging my bum as far off the back of the bike as I could I released the brakes and just went for it. Pretty soon I was at the bottom of the steps, the bike had survived, and better yet, so had I... 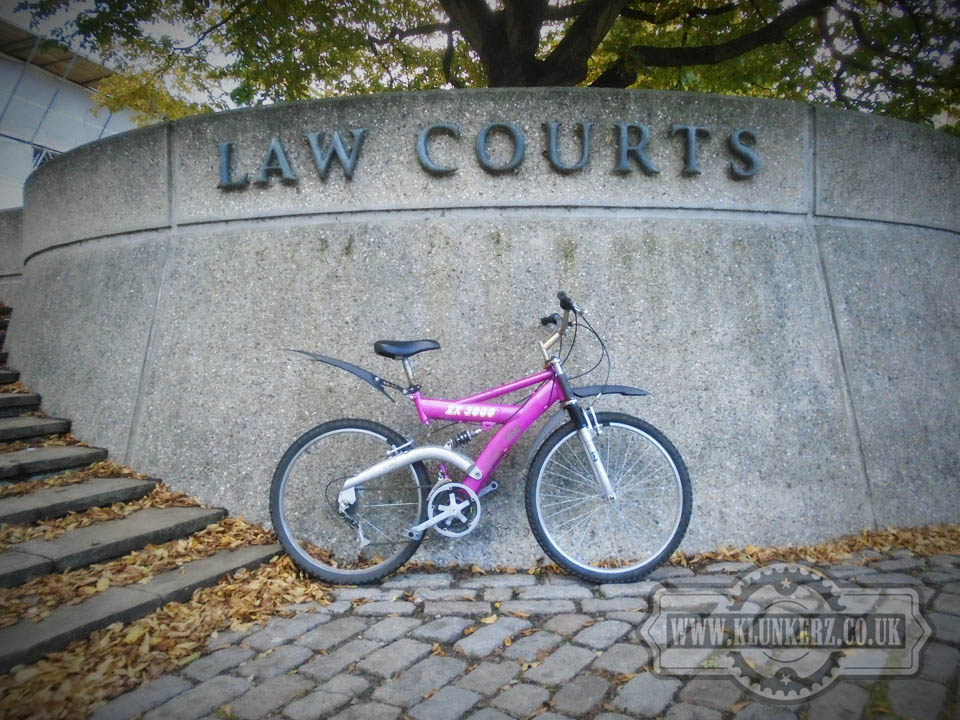 Although, it is safe to say that the young policeman who was stood by the front door looked less than impressed by the sight of a middle aged fat man bouncing down the steps of the law courts on a bright pink bike. He gave me a stern look, but said nothing. I decided it was time to ride elsewhere!

On the ride back to BelongaClint I thought about how the Torpedo Flyer had made it down the steps quite well, and stayed in one piece, although the quick release front wheel had managed to shake itsself lose on the steps. But was the ride any smoother than it would've been on a regular mountain bike with no suspension at all? My feeling is that surely it must've been, but the more I think about it, the more I wonder if it was more turbulent because of the bouncyness of the thing? Perhaps I need to take a regular mountain bike to the steps and give it a go for comparisons sake at some point. But for now, with no further fettling to do I think I'll take it for one last ride, then my month of test rides on it will be over, and I should be able to say with some degree of certainty just how good, or bad it was.