It feel like ages since I've been out on my bike, even though it less than a month... Just! The reason for this is that I've either been too busy with other stuff, or it's been just too damn gloomy for me to gather up the enthusiasm and get out there. I've not even been fiddling with bikes, again, it's a complete lack of enthusiasm. I think that every year about this time my drive for just about everything starts to evapourate, as the cold, dark, wet Winter days set in, but this year for some reason or another, it seems much worse. Honestly the other morning it was pretty dark, and at 11:00hrs Mrs Clint came and woke me up, I'd been asleep for nearly 12 hours, but even so I was in no mood to be woken up, and she got told to go away, and come and wake me up again a bit later. She asked me how much later as she was going out, to which I replied, I dunno... March? But in all honesty it was too late, I was awake then, and once I'm awake I have to get up. But I genuinely feel like I could hibernate away the Winter, and I'd wake up in a much happier mood when the Spring arrives!

Anyway, I feel that as usual I may well be geting too far away from the point, and so to try and regain some sort of enthusiasm I thought that I might buy something new. My regular source for my bike fix has all but dried up. Right now if you want to go to my local tip I have to book an appointment, and turn up in my car. I did this last week, but things have changed, by all accounts they are no longer able to sell stuff to the public anymore, so that was me scuppered. There was even a fairly decent amount of bikes to choose from, but I had to leave them all there.

Next stop, farcebook and fleabay. I have a project in mind for a bike, and unbelievably despite a stupidly huge collection of bikes in my back yard at my disposal I have nothing that is suitable. The thing is I need something that is big enough for me to ride, but also small enough for my two little Monsters. I'm guessing a mountian bike with a frame size somewhere between 17 to 20 inches at a push would suit. I have a Mongoose 24" wheel BMX which despite having a frame of about 12" is both big enough for me, and small enough for my littlest Monster to ride, but for what I have in mind the frame needed to be larger. I'm guessing that the smallest frame that would be suitable would be maybe 15", the reason may well become apparent in due time.

So with several cheap bikes with frames between 17" and 20" secured I set off yesterday in my pick up to do a big round trip and round them all up. Despite not being the furthest one away, it was on the way to collect the furthest one from BelongaClint, and I knew I wouldn't be returning home that way because my journey would be a sort of big loop. So the bike I collected first was this one... 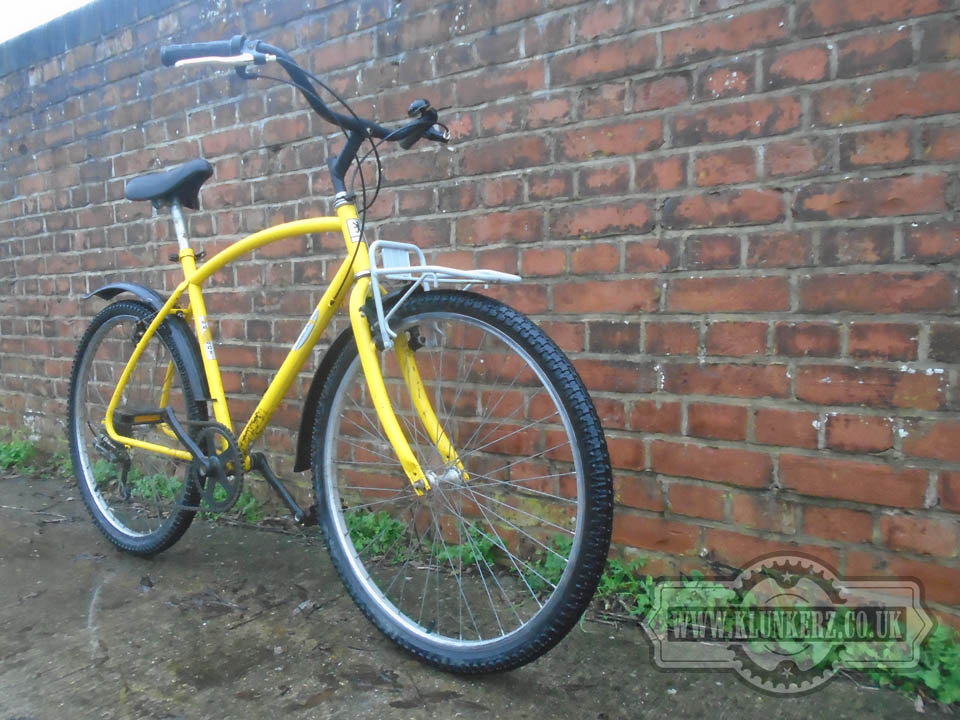 A Peugeot Swan 20. Now inspite of this one having the largest frame at 20" my feeling is that this is most likely to be the one I use for my project because out of all the bikes I picked up this one is in the best condition. Although oddly I have another contender with a 19" frame that is quite scruffy that I may well try first. 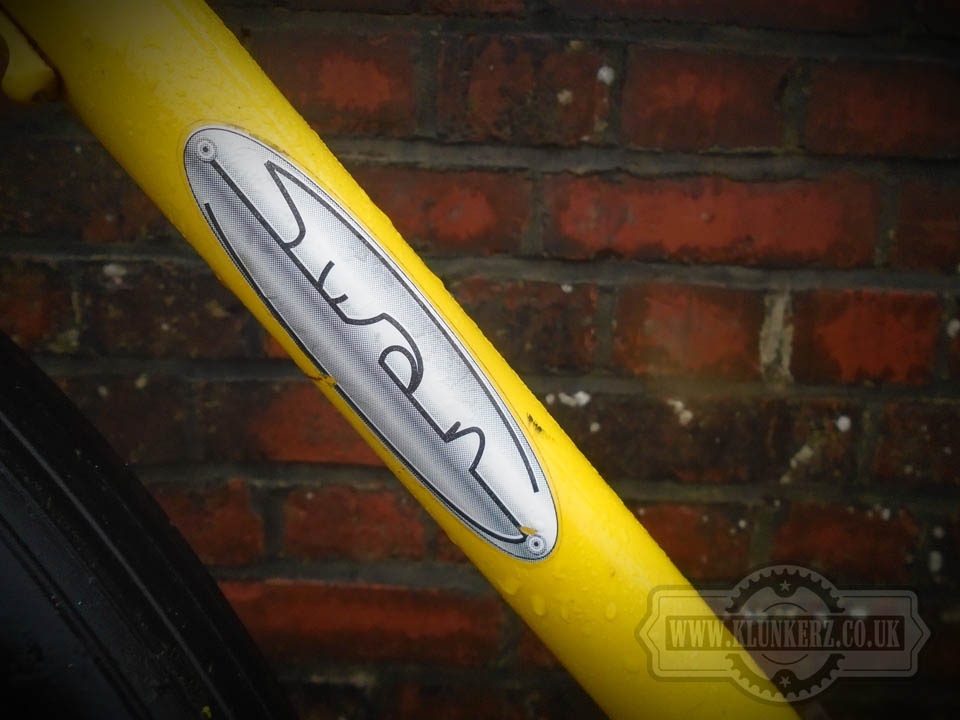 So what is it? Well to be fair I don't know, I had a quick look on t'internet to see what I could find out about it, and the truth is very little. Infact all I could find out about it was that it was sold by Peugeot in 1997, and they did it in both a traditional Mens frame, and also in a Womans frame. I'm guessing that it probably wasn't a big seller as I don't think that I've ever come across one before, or even seen one. 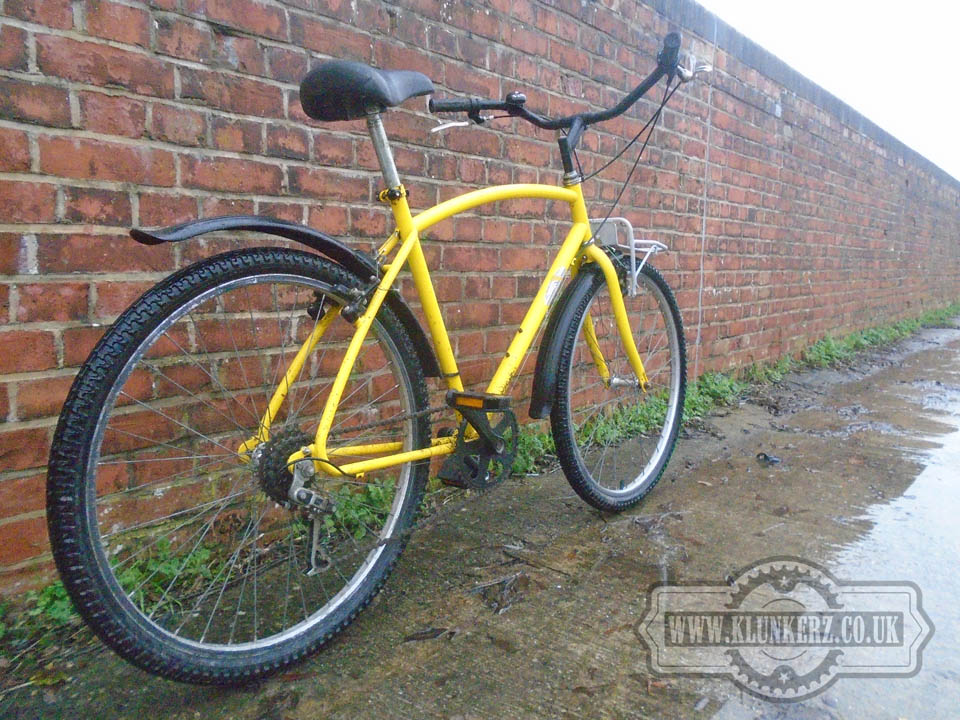 So with my very limited results from my brief search I figured that the best thing I could do is get out there on it. My initial plan last night was to just go out on it today, as hopefully it would be dry, well that didn't happen. It was dry when I got ready to go out, but both the tyres were flat, so I pumped them up, only to find that the front one was punctured. So I replaced that innertube for one of the ones I fixed during the Summer. With that done I removed the remainder of the rear mudguard, and the damaged front mudguard as it was bent and rubbing on the wheel, and I was ready to set off. The trouble was that by this time it was raining. As I sat on my doorstep despair started to set in, but then I noticed a pair of plastic mudguards on a pile of bike parts that I have yet to sort out. So, as I was sitting there I thought that I might as well fit them to the Swan 20. By the time they were fitted it was raining quite heavily, and so as I was wet already, I set off. 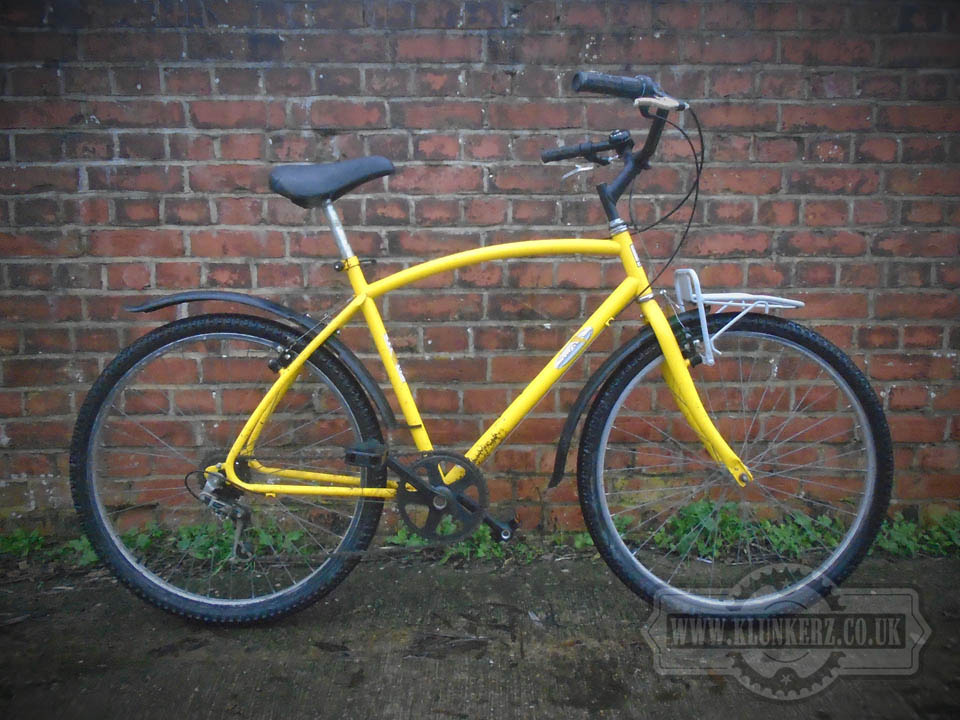 I did my short test route just to see what it was like, and pretty soon I was feeling pretty pleased that I was out on my bike even though I was soaked to the bone. I don't know what you'd class this bike as, but it almost looks like to me that the designers were building a Beach Cruiser and then went no, no, no, it's getting too curvy, we need it to be more of a Mountain bike. But whatever it is, it's just beautiful to ride! Infact it's so good that at the moment I really don't want to touch it incase I mess it up! After riding it I really am wondering if this can be improved upon at all, but of course I am going to try. But that being said, after I've tried if I somehow make it worse I shall be putting it back to as it is now. 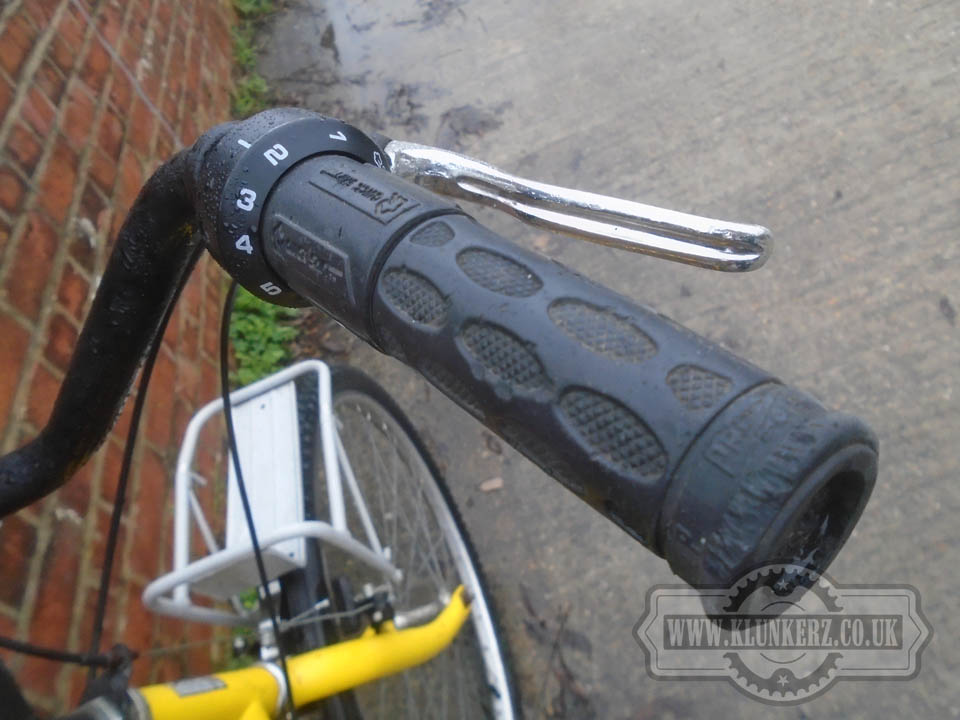 So what I intend to do for now is firstly to remove the grifter-shifter as I hate them. I really would be far happier with an old lever type friction shifter if I have one in my stash. I'm also wondering if I should fit a three speed crankset. It doesn't really need it if I'm honest, but the cheap as chips pressed steel one that's already on the bike really does nothing for the looks of the thing. Plus the frame already has two braze-on cable stops in place, and only one of them has a cable going through it. My feeling is that for some reason they built the bike with the idea of it being a ten, or fifteen speed, but then decided that five gears was enough. I may also change the handlebars, which I like, however I think that they're slightly bent, and one side is maybe half an inch lower than the other. I dunno, I'm going to have to have a closer look at it at some point. 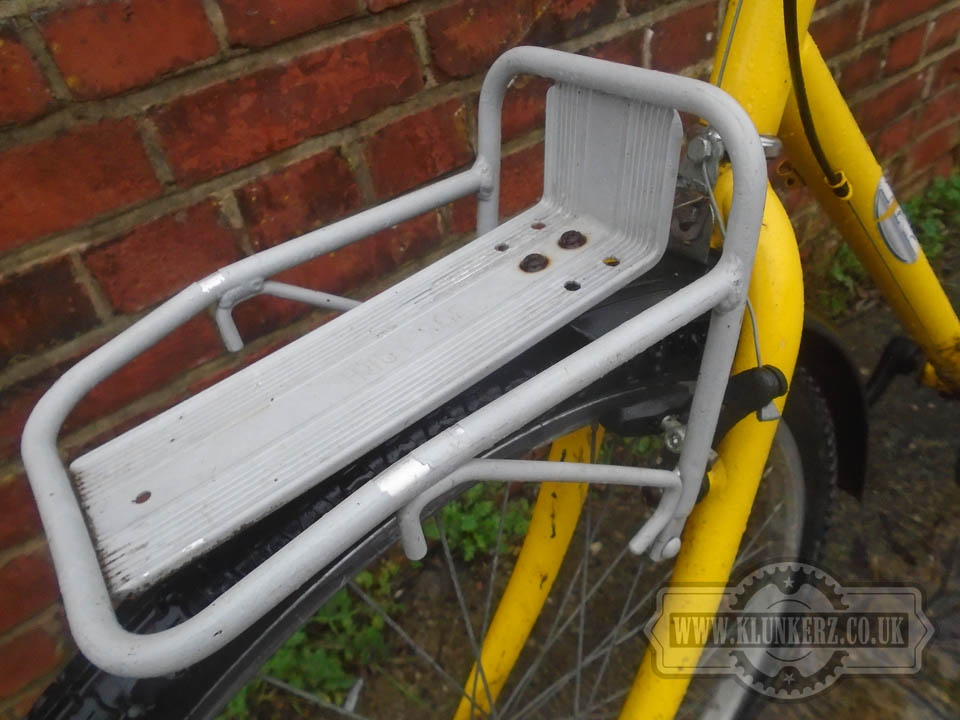 Apart from that, this front carrier has to go. Well, it doesn't have to, but my littlest Monster has asked me to fit it to her Giant Rincon that she uses for school, and as I don't really have any plans to use it, especially if this does become the bike I use for my little project, then she is more than welcome to it.

But for now I think my plans are for a good rummage in my parts stash, fit any parts that I feel would be an improvement. Ride it a bit more and make sure I've not ruined the thing completely. Then decide if it's suitable or not to use as the basis for my little project that I've had going round and around in my head for far too long now.