Back in May I told you about this San Eagle Jungle Scout that I dragged home after finding it abandoned in the woods. 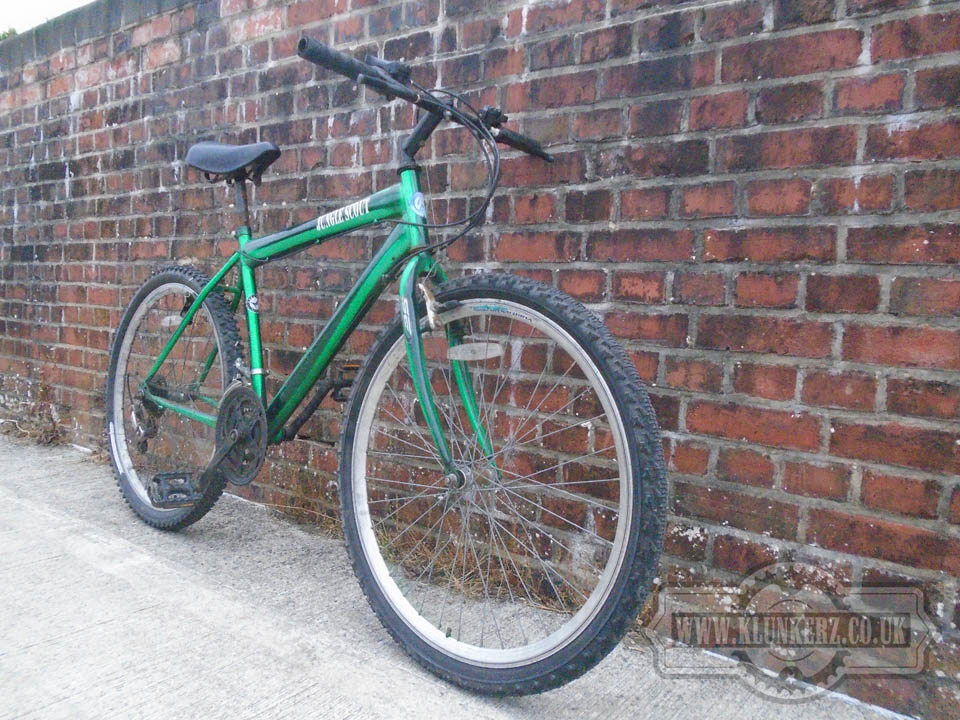 I'll be honest, the best thing I could've done was to have carried on riding, and left the thing there to be reclaimed by nature. But passing it every day for a week or so had it playing on my mind, and in the end I decided that I needed to have a quick walk in the woods to take a look at it. Afer a quick look over of this thing I figured that it was of very little use to me as it really didn't have much in the way of useable parts on it, and so I thought that I would leave it at the tip as I passed it on my way home. Unfortunately for me that didn't happen as the tip was closed, and so I dragged it back to BelongaClint.

Once I'd spent the time and effort to drag it home I figured that now it was here, I might aswell get it to a point where it might be of use to somebody. So I began to tinker. 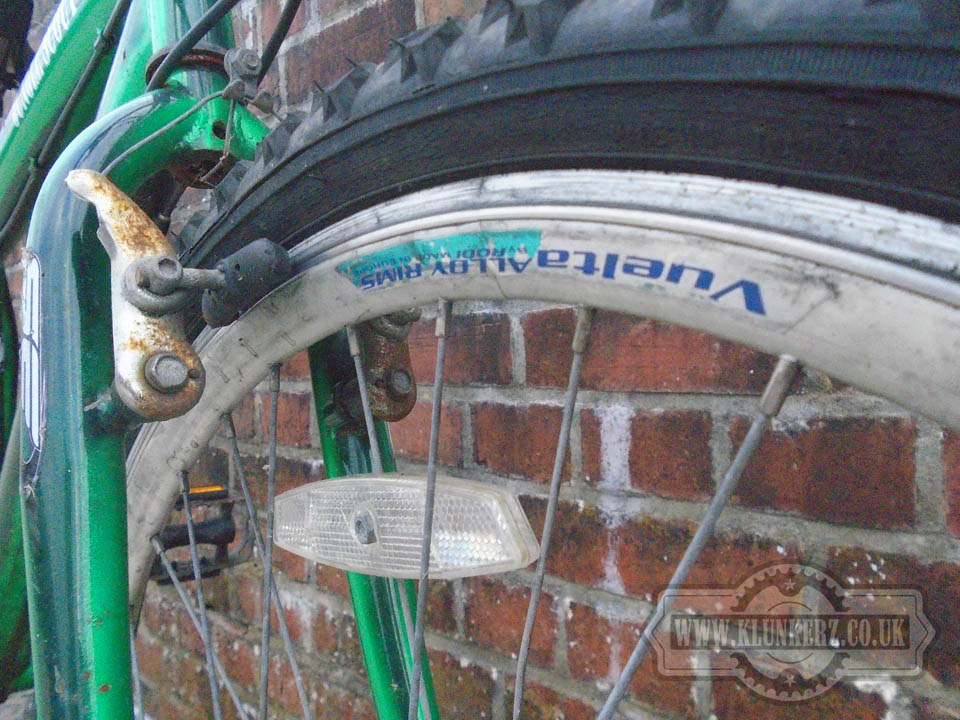 When I looked at it in the woods I thought that the wheels were too buckled to be of any use as they just wouldn't rotate. However on closer inspection although they aren't the straightest it was infact the tyres more than anything that was the real problem. So I straightened out the slight buckle as best I could, and repaired the punctures, before fitting it with some tyres that weren't perished and split from my stash. To be honest I've had these tyres for ages, and I doubt that I would've ever used them on one of my bikes as they're not the best, and fairly worn. But they're a whole lot better than what I found on this bike when I got it, and they'll do the job I reckon as atleast they hold air, and they're roadworthy. 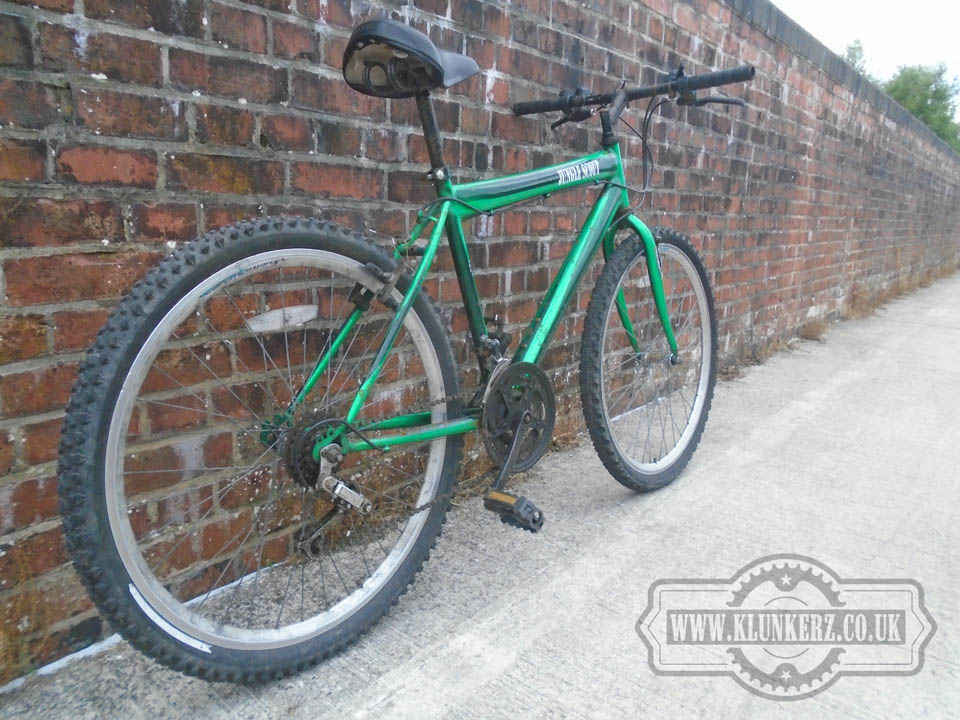 With the wheels and tyres sorted out what it really needed more than anything was a good lubing up. I dowsed everything with WD-40, and once I got it all moving I took it apart and greased the bearings. They were as dry as a Nuns fanny, and as expected the bearings in the bottom bracket resembled the dice used in Dungeons and Dragons, so those got replaced with some second hand bearings I had kicking around. My plan was to not spend any money on this thing as I knew that it was unlikely to become part of my collection, but I still wanted it to be as good as it could be to ride it. 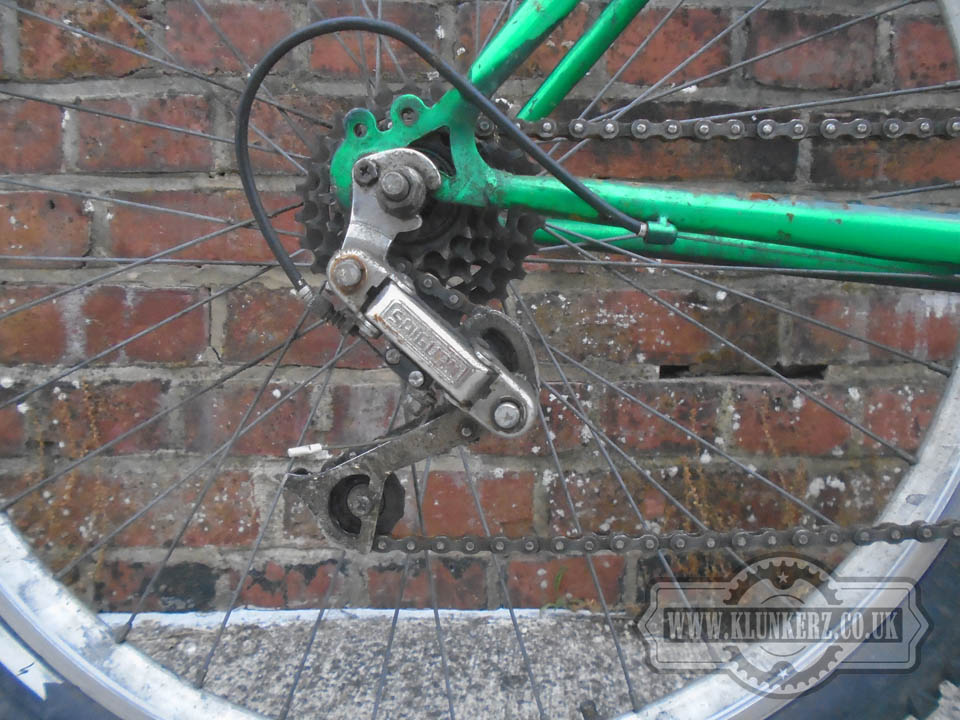 With it all lubed up and back together I moved on to the cables. I think that this had sat outside unused for a good long while as all the cables apart from the one that served the rear deraileur mechanism were siezed solid. I tried spraying WD-40 into the cable outers for a day or two but frankly I doubted that this would be fruitful in the end, and as expected I was proved right. So I dug through my stash looking for cables to use, and pretty soon I had some second hand cables fitted. The cable outers may not all match upon close inspection, but atleast they're all black, and the cables now move freely inside as they should do. 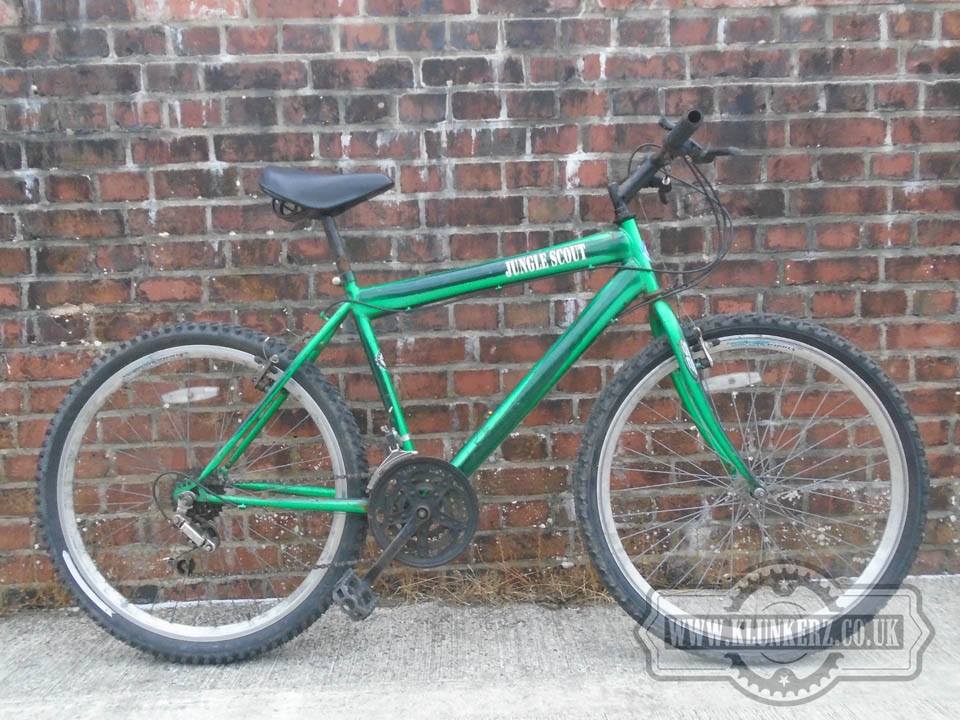 With that done all I was left to do was fit a pair of grips, replace the saddle as the one that was fitted to it appears to have a chunk bitten out of it, and fit some new pedals as one was missing apart from the central shaft of the pedal, and the other pedal was rusted solid.

I'll be honest I've not used any parts that I would consider particularly good, and infact of all the parts I have used none of them would've ever been fitted to one of my bikes in my collection. But they were all better than the Jungle Scout was fitted with when I found it, and they have at the very least helped to create a bicycle that is rideable again. So you may well be wondering what it's cost me? Well in hours, quite a lot, but a good percentage of that time was spent digging through my stash and finding parts that were better than it had, but not too good for it. Total cost in money however... £0.00, and that of course includes the bike in the first place! Which I am very happy about. 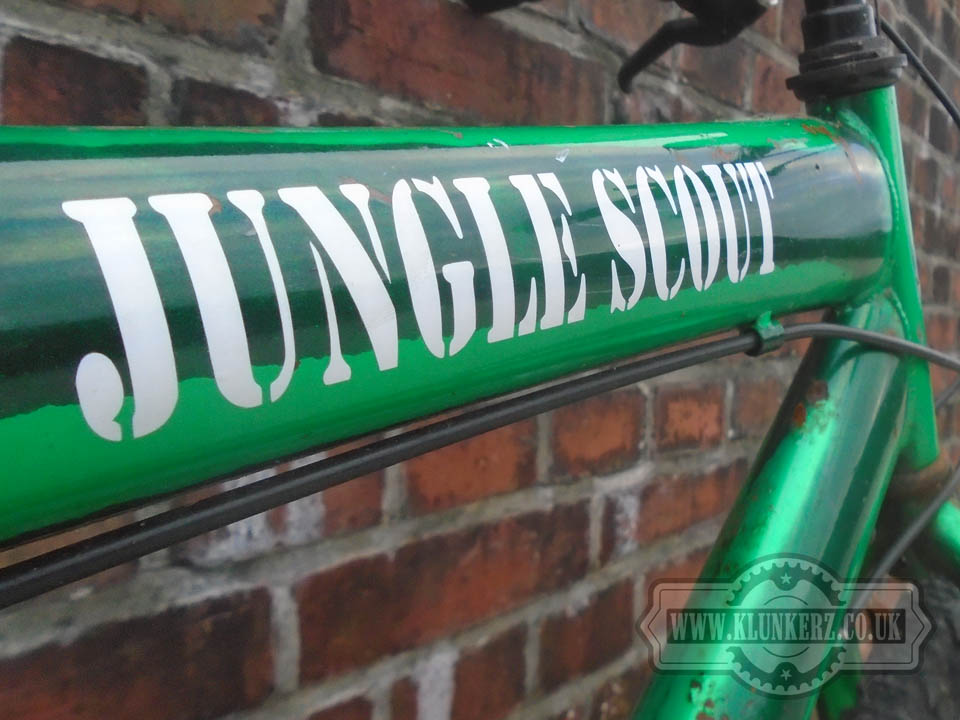 So you might well be wondering what it's like to ride. Well, I'm not going to lie to you, it's not the best! But that being said it's quite a long was from being the worst either. Being a steel framed bike it's not exactly what you'd call light, but as I'm sure you know that doesn't worry me. But I think that what is holding it back is that it's created from rubbish. Y'know, from the worst componenets I had rather than the best ones that I would normally choose to fit to a bike that I am building for myself. I think that with some time, care, and attention to detail there is most likely a bike here that is very pleasant to ride, and will last a good amount of time. Heck if you were keen and stripped it down and re-painted it and fitted good components with new bearings and cables I think it would transform this into a very pleasurable thing to ride, rather than something thats just a little bit averagely average. I'd even go as far to say that if I didn't already have far too many rubbish bikes to play with I might have even done it myself at some point. But with a major culling of my bikes planned for the new year I know full well this one won't be making the cut, and at some point will be somebody elses beater... Klunker! I do sort of hope that whoever winds up with it does save it, spend some time money and effort on it, and transform it into the bike that it really could be so that they can use and enjoy it for many years to come.