It's been ages since I last rode my Univega Rover 3.3, looking through the photos on my computer I would say that the last time was actually in the Summer, very early in July. The reason for this is because I've only got room for so many bikes at BelongaClint, and so some bikes end up being a good ten minute ride away from home in my council lock up.

Lately I've been doing almost all of my riding on either my Schwinn Cruiser Six, or Bikini Hurricane beach cruiser, I'll admit that despite the weight of a beach cruiser I do quite like the riding position of them. However, just lately it's been quite peopley out there on my little route, and I'm not enjoying riding the beach cruiser through the hordes of people who seem to be infesting the cycle path. So yesterday I decided that the Daewoo Genius would get a ride out incase I had to ride through hundreds of people again... I did! Today when I was getting ready for my ride I thought that it was high time I went out again on the Univega, and so I headed to my council lock up first to fetch it. The ride to my lock up was pretty good on the Daewoo, however there did seem to be an awful ot of traffic on the road today, but before long I was at my lock up, pumping up the soft tyres on the Univega before setting off on that. 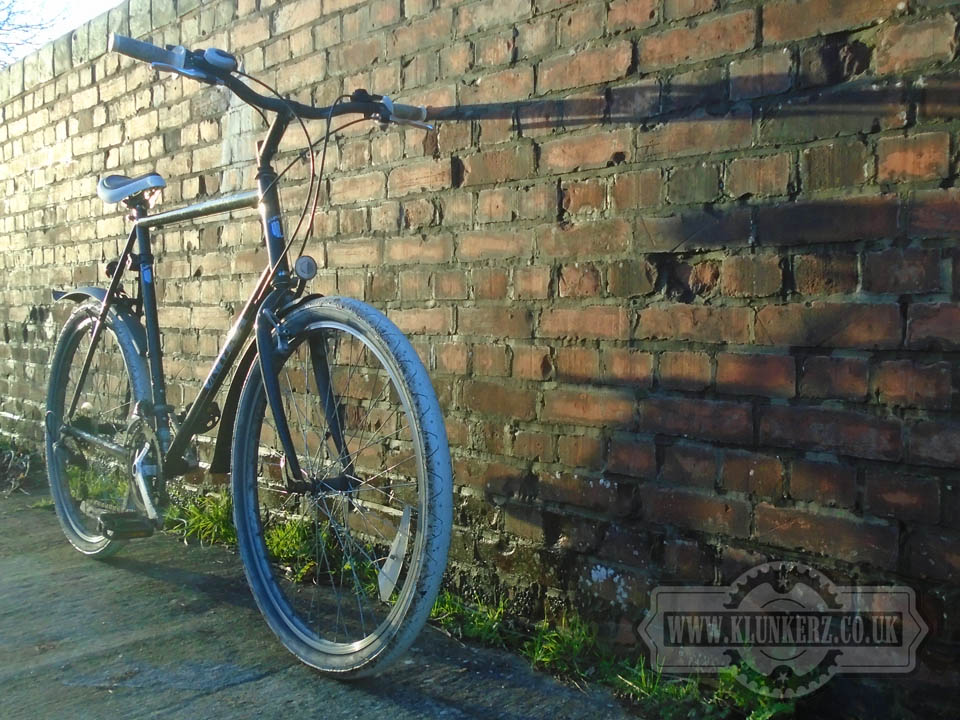 With my lardy arse perched upon the hard plastic saddle of the Univega I set off. I've been leaving for my daily ride later and later each day in order that I will hopefully not be riding in a crowd. However despite this there still seemed to be a fair amount of traffic on the road when I reached the cyclepath that runs alongside the river where I normally ride. The path was fairly busy, but I'm getting used to that now, however within about five minutes it was so busy that I actually had to get off and walk. I'm not sure what's happened since the beginning of the Coronavirus outbreak, but my route has been steadily getting busier and busier as time goes on. It doesn't seem to matter what time of day I head out either, it's just never not busy. My feeling is that despite this dreadful virus, we are all going to be getting healthier because of all the aimless wandering about we all seem to be doing now! I was going to turn back, but looking behind me seemed to be easily as congested as the road ahead. So I figured that I'd just walk with the flow, and then take a short cut, miss out the Viaduct that I normally ride along, and instead ride along the road that joins a main road which leads into town. I rounded the corner to take the small road... More peoples! 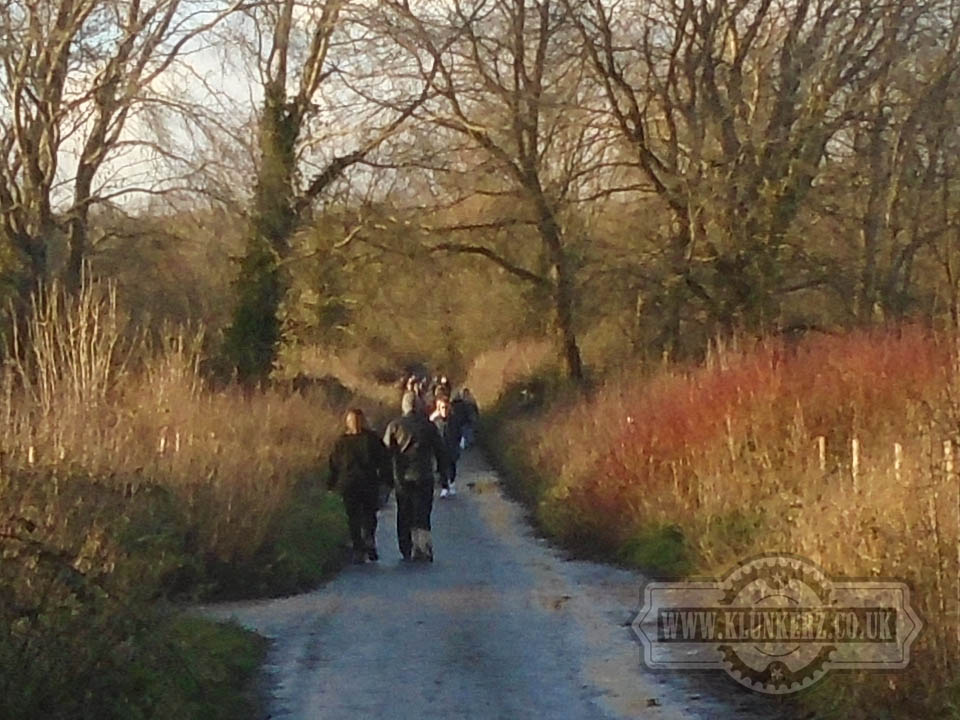 As I started along the road a younger cyclist from the lycra clad brigade was coming towards me. He said that it was a mistake to go this way as there was bloomin hundreds of people walking in the road down there, and he'd had to walk most of it! I could see quite a long way down the road, and I could see what he was saying as the further along the road I looked, the more dense the crowd appeared! I thanked him for his advise, and advised him that it was no better going the other way. I turned around, and headed back towards the Viaduct. 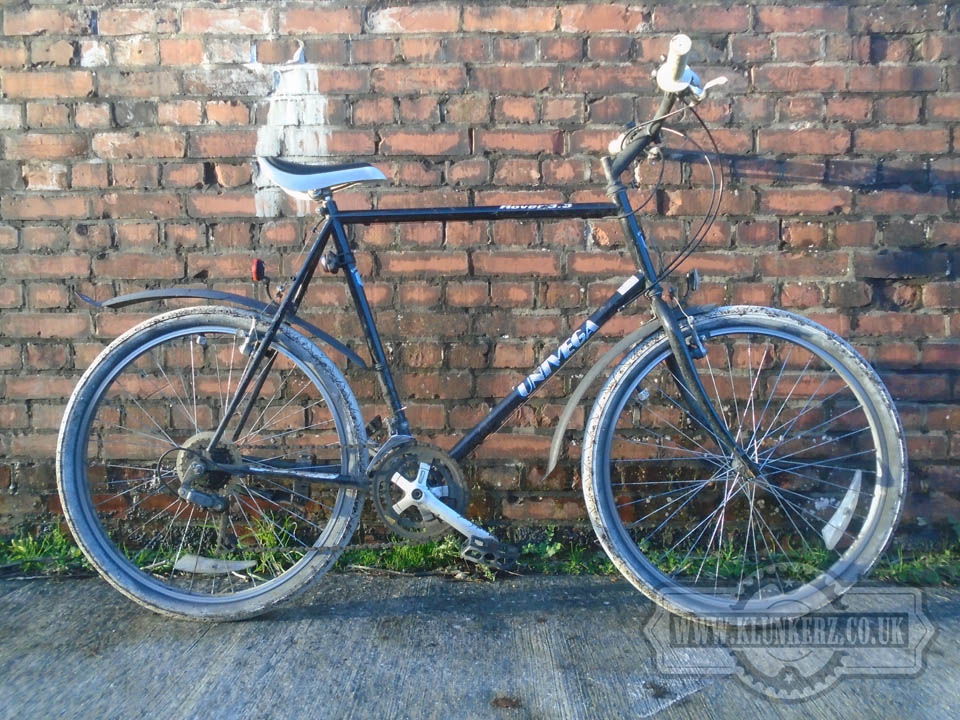 As luck would have it, the Viaduct, despite being busier than usual, it didn't seem to have quite the number of people on it as the route to get to it did. My guess is that the reason for this is that just before getting onto the Viaduct you have a choice of two other routes. So finally I was riding once again, even though I was weaving my way through pedestrians. 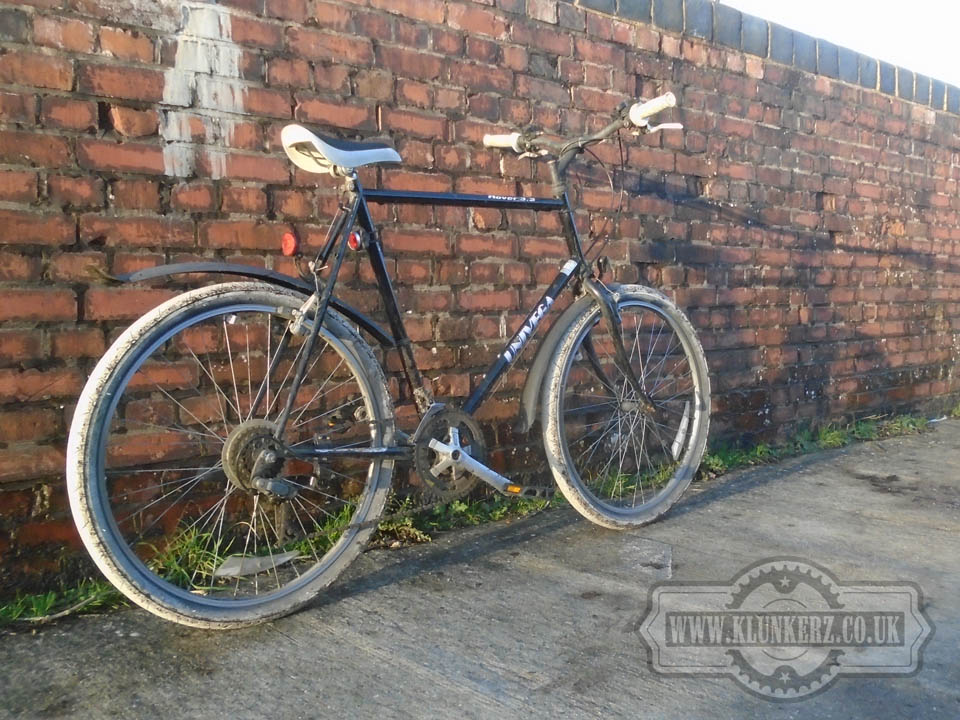 It was good to finally be able to ride again after walking and pushing my bike throught he crowds for the last half an hour or so, but better yet, it was good to be riding the Univega. I remember thinking a couple of years back when I dragged this thing from the tip that after a ride or two it would be going up for grabs very quickly, but pretty quickly, after only a day of riding it I found myself thinking that I would need to ride it a bit more. That feeling hasn't really left me. I'm almost certain that this bike was probably at the very cheap end of the spectrum when it was new, but there's nothing wrong with that, especially when it rides as well as it does, and is as comfortable to ride as it is. Over the last couple of years I have made a few tweaks to it, and I think that it may well be now as good as it's ever going to be. Because to be frank, it's really good, I would actually put this thing very very near the top of the list of the best bikes I've ever built. I would go as far as to say that I'm pretty sure that it's the best Mountain bike I've ever thrown together, I'm reluctant to say it, but it's just perfect. Well, it's perfect for me atleast.

So where do I go with it from here? Well, in all honesty I should just ride, and ride, and ride it, and maybe perform some regular maintenance to it. But my feeling is that I need to tweak it a little further. I know the sign of any good artist is knowing when to stop, and I really think that time is now for this bike. But I think there are things that I still want to change, and none of it will change how it performs, but I feel I want to change things for the aesthetics more than anything. Although I am now wondering if I want to change things, just for the sake of changing things. I really think that perhaps I should give it a little more thought before I change anything and ruin a really good ride. So for now I think I shall just ride, and ride, and ride it, and then when I'm done doing that, ride it some more!