Okay folks I want to waffle on about a little project I've had ticking away in the back of my mind for some time now, and frankly, it's time it reached fruition. It's not like I haven't started it either, I have several times. I originally thought I'd use a Mongoose BMX with 24" wheels for my project, but sadly the frame just wasn't big enough. So then I bought the Daewoo Genius for the project, then the Peugeot Swan 20, then a Mongoose Crossways, and there were some other less memorable bikes too, but all were found to be no good for the project for various reasons. Mostly there was some sort of design floor that stopped me doing what I wanted to do, however in the case of the Peugeot Swan 20, I just couldn't bring myself to chopping it about.

So, before buying yet another bike that isn't quite right, the other night I sat down, and tried to work out exactly what kind of bike I needed. Funnily enough I have the perfect bike in stock several times over, but like the Peugeot Swan 20 I just can't bring myself to carving my beach cruisers around, or the Huffy Cherokee, or even the Magna Fugitive. So despite having atleast one bike that would do, I hit fleabay. Oddly the first bike I found was another Magna Fugitive,  newer one than mine, and this would've done just fine, but it was miles away, so I let that one go. After several more evenings of search I finally stumbled across this... 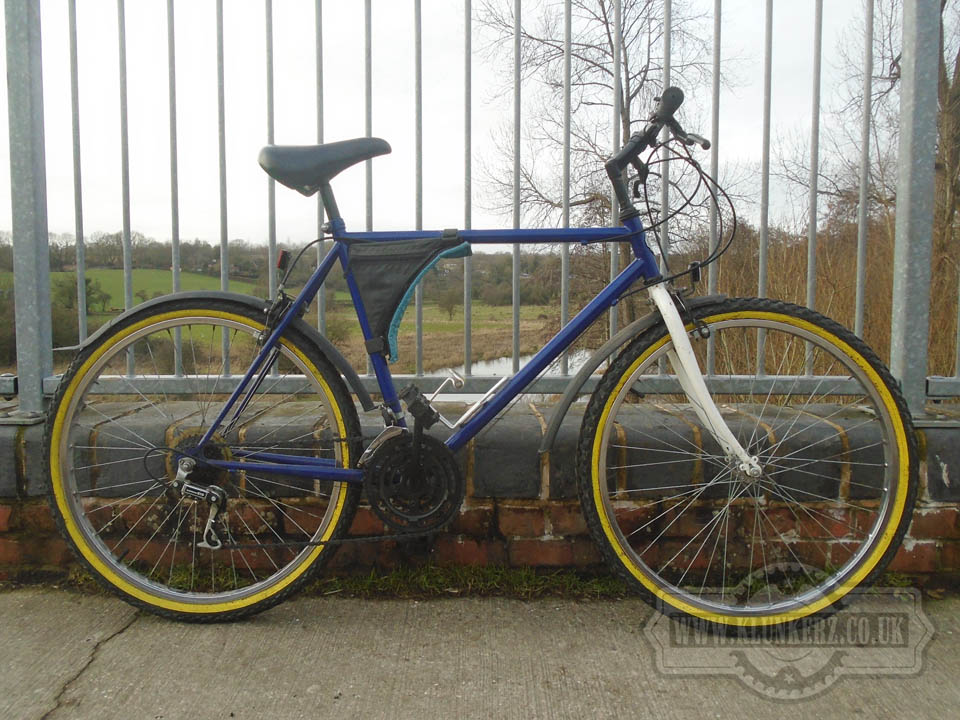 A Universal Cycles Hill Street Cruiser. I'm sure it has come as no surprise to you that this is a bike from the crap end of the spectrum, however, like most of the bikes I get from this end of the spectrum it's actually not too bad. This isn't even the first one of these that I've bought, back in 1988 I actually forked out £80 of my hard earned wages and bought a brand new one for one of my Brothers and gave it to him for Christmas! My feeling is that if I searched my folks house hard enough I may even find enough of the parts of it to put it back together. (My Brother isn't one to throw things away!) 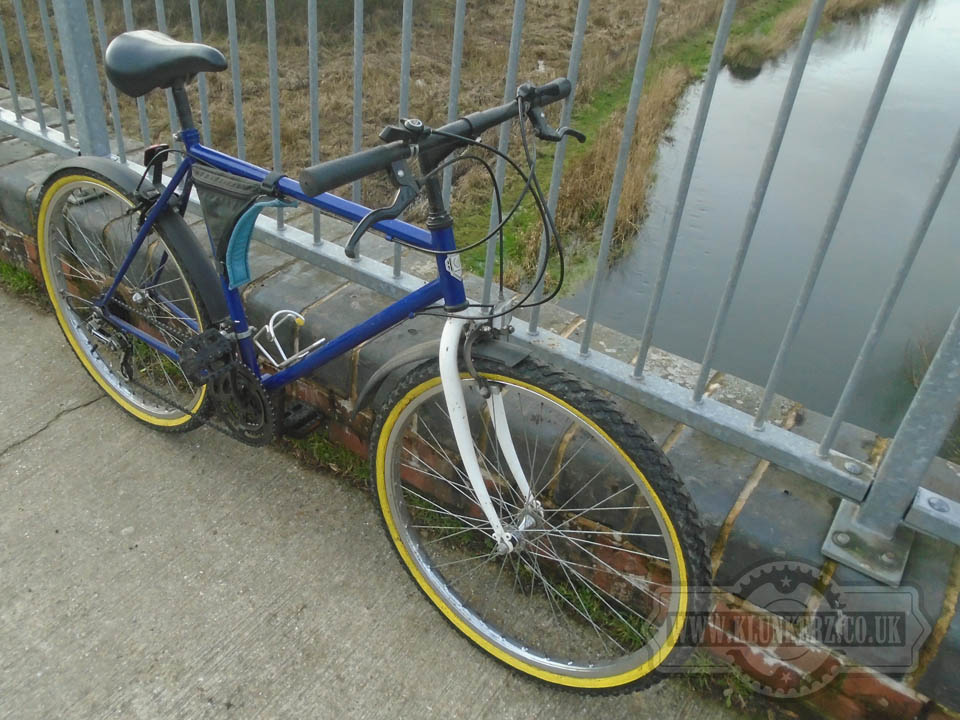 Anyway, I picked this beauty up today, and because the tip still isn't really letting people in for a rummage around and to buy stuff I had to pay proper money for it. By proper money I am only talking £20, but in reality that is probably a good £15 too much for this thing! However, because I think that this time I've got a bike that is perfect (almost) for my project, I splashed the cash, and headed home with my Hill Street Cruiser flung in the back of my pick up. 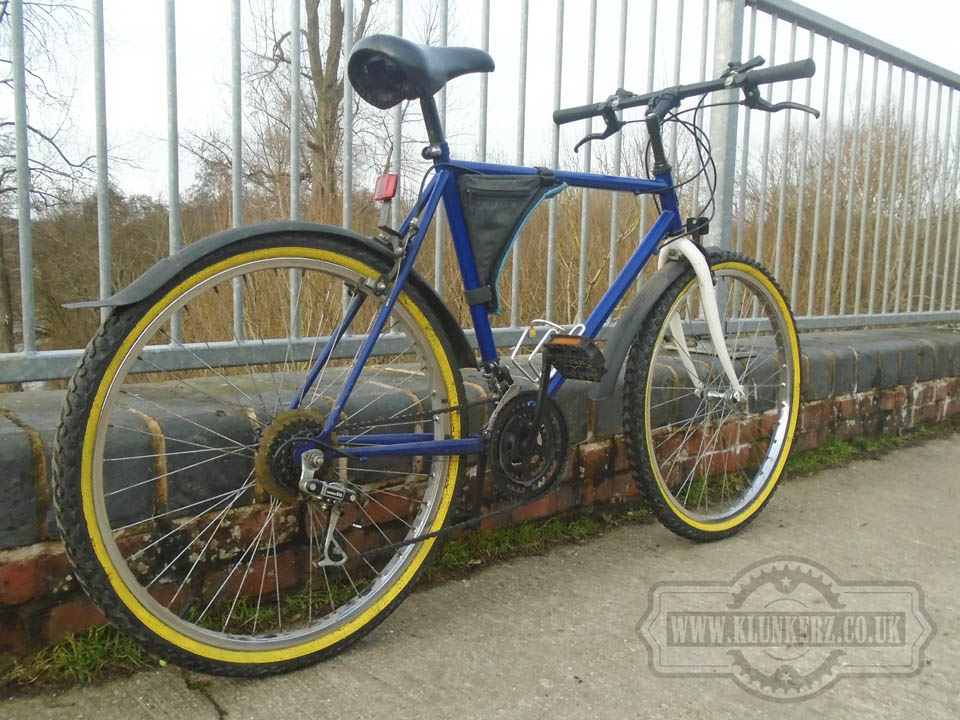 Once back at BelongaClint I popped the wheels back on it (The guy had taken them off for me to make it easier to transport!) Fitted some new wind to the tyres, admiring the carefully painted yellow walls that someone had done some time ago with what looks like household gloss paint. Then I made sure everything was tight, and headed off for a ride.

I'll admit that from a quality standpoint it's not the best, this bike was built in the eighties, built to a budget, and frankly it shows. Steel wheels, steel frame, steel pretty much everywhere except for the brake levers, which are plastic! Of course, all this steel means that as well as being built to last, it's heavy. However despite this it's really quite lovely to ride. I think it's yet another shining example of why I like crap cheap old bikes. OK I'll admit that if I was a serious bicyclist I probably don't have a single bike that would be any good, but that being said I doubt that if I sold my whole collection of rusty, crap bikes I wouldn't be able to raise enough money to buy a seriously good bike, and I think I'm fine with that if I'm honest. Besides, I'm not sure that I'm a serious cycling kind of chap. I ride for three reasons, for fun, to get outside, and to fight the flab... Mostly to fight the flab! And for fighting the flab I reckon heavy old cheap rusty mountain bikes probably do the job the best. That being said however, by the time I finish with this Hill Street Cruiser it will be of little help with fighting the flab. But for now I'm just going to tweak it a little, make it as close to the starting point of the project I have in mind that I can get it. Then once I've got it to where I think I should be starting from, tear it all apart and start my build. Updates as they occur!