Okay folks, now then, let's talk about the BMX, by the time the BMX thing had hit Great Britain I felt that I had just missed the boat, and so went from riding a Raleigh Chopper, straight to riding a Mountain bike. I liked BMX's and thought they were kinda cool, but I also felt that I was just too big for one. I've ridden a few over the years, and I have adult friends who ride them now, but for me they always seemed to be too small. Thats not to say that I haven't kept trying, I've bought and then sold loads in the hope that I would eventually find a suiter, but even the larger ones with the 24" wheels seem a bit too small for me. I guess that the nearest I've ever had to a BMX that I could ride was a Halfords Turbo which was a BMX looking bike but with 26" wheels and a three speed Sturmey Archer hub. I quite liked that thing, and the frame and forks are still in my parents loft.

Anyway just lately I've noticed a fair amount of us middle aged kids out on their BMXs while I've been out and about on my bike, this got me thinking, I need as BMX type bike. Knowing that a regular BMX wasn't going to cut it for me I hit fleabay looking for a BMX with 26" wheels and pretty soon I was looking at cheap Jump bikes. Over the years I've had several of these things, and every time I've thought about hanging on to one to make a sort of scaled up BMX from, but every time someone will come along and buy it from me before I've got around to it. However, before long I had located one near to BelongaClint, and as it was cheap, clicked the buy it now button. 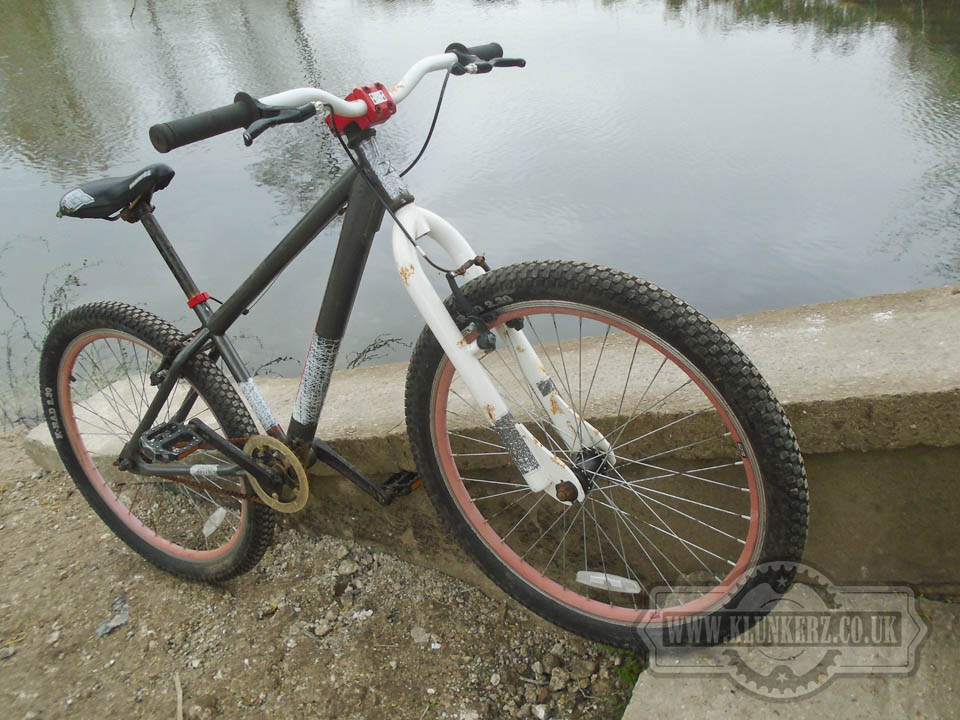 What I have bought is something called a X-rated Mesh, now I've got to say that I have no idea if this is a good or bad thing, but as I figured that I quite like crappy bikes at the rubbish end of the scale it probably doesn't matter. However what I can tell you is that it is heavy, I'm almost certain that this thing has a frame made from gas pipe. However I liked the look of it and so arranged with the seller to come and collect it.

In order to keep Mrs Clint happy before looking for another bike I have had a bit of a culling of my bike collection, and so before even looking for my jump bike I had sold almost 20 bikes from my collection to provide room for my new machine, however when I arrived at the sellers property I was greeted with this sight... 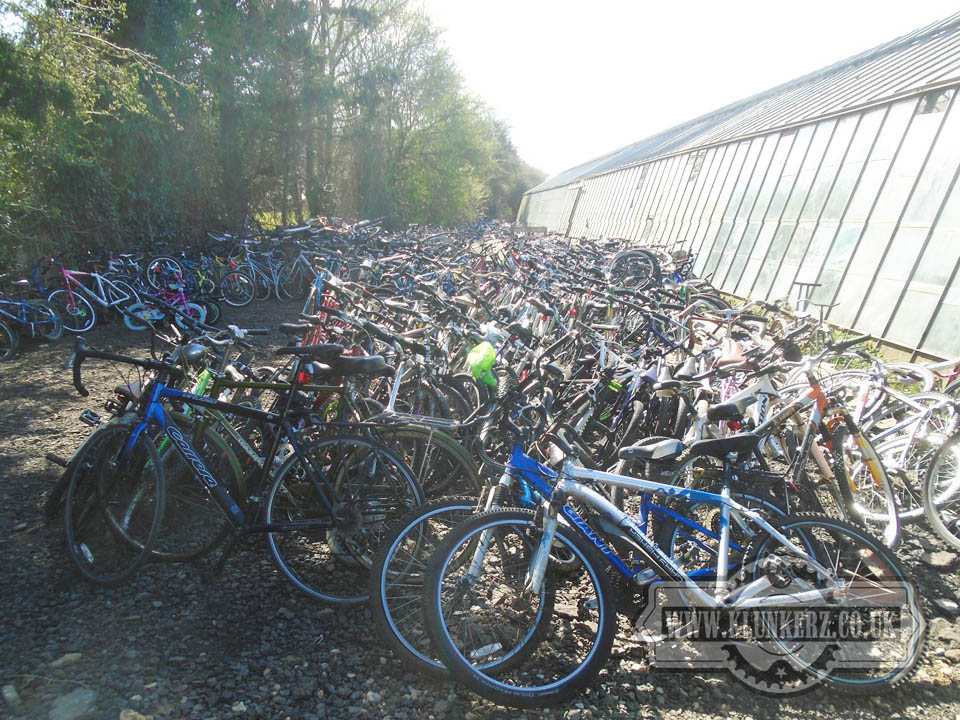 Oh dear! I was completely overwhelmed by the sight of over a thousand bike projects all waiting to find a new owner. I asked the seller if I could have a browse, and he said I could and asked me to let him know if I found anything else I needed before leaving me to it. Deep down insde, my feeling was that this had just become an expensive morning! About two hours later I had picked out several other projects that needed to come with me back to BelongaClint, and I was heading to the cash point to get the money out to pay for them all. with them all paid for I loaded them into the back of my Navara, and headed for home trying to work out what sort of excuse I was going to use to explain to Mrs Clint about how I have replenished the stock of crap bikes that I had only just sold. Back home I decided that the best thing I could do to explain the situation would be to tell Mrs Clint that it hadn't really gone according to plan, and then show her the photograph of all the bikes this fella had for sale. So that's what I did, Mrs Clint just looked at me and said quite firmly, OH NO! Oh yes I said, but told her not to worry as I haven't quite bought as many as I've sold recently, and so, from a space point of view I am probably still winning... Just! Besides I said, it could be a lot worse, our back yard could look like this fellas! I'll be honest, I'm not really sure that helped my case!

Anyway, no doubt in the future I'll tell you more about my newly accquired junk collection, but for now let's concentrate on the X-rated Mesh... 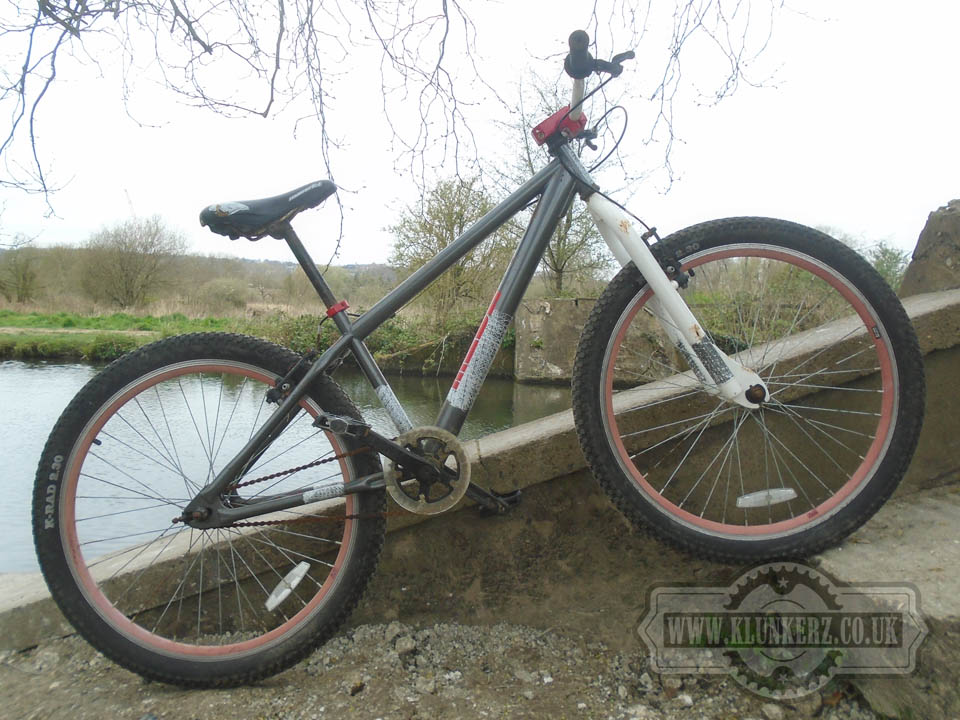 So what's it like? Well if I'm honest it's a bit too small. However if I am able to find a long seatpost preferably with a layback and a more BMX like set of handlebars then there's a chance that it might just be OK. I think it's only about an extra 2" that I need, but I think that extra 2" or so will make all the difference to how comfortable the ride is going to be. I have taken it on a bit of a run for a couple of miles, and it's rideable for me, but like I say raising the seat a little more is probably going to make it better. I've already dug out a couple of sets of handlebars that may well fit the bill, but after rummaging through my stash it looks like it'll be back to fleabay to see if I can track down a slightly longer seatpost. With those changed I think I'll be out and about on it once again. 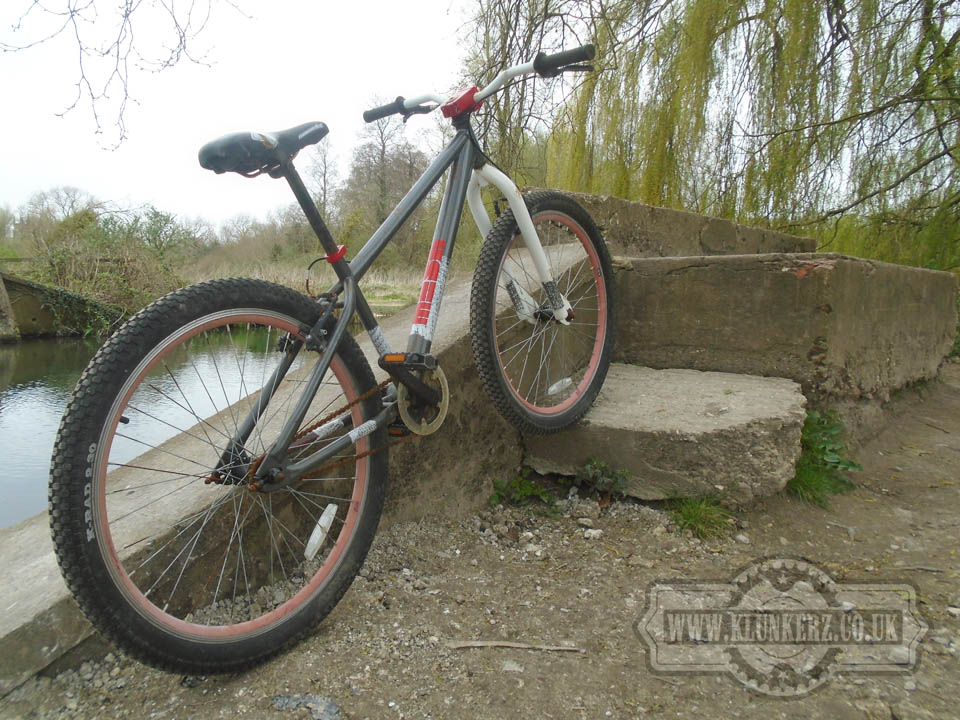 I'd like to think that I'll keep this thing a little while, and as it's quite rusty in places I'd like to think that I may even get around to painting it, as for riding it like the kids ride their BMXs, I doubt that's gonna happen. I was no good at that kinda stuff when I was young and my body was harder to damage and when I did damage myself I repaired relatively quickly. Now that I'm middle aged I feel that I would break like an old mug being dropped on a hard floor, and the time needed to repair myself might be a lot longer so I might just leave the stunts to the young-uns. That being said I might pop the odd wheelie, and maybe do the odd small jump just to try and keep myself young!